10 Customs Only Locals in Hamburg Can Understand 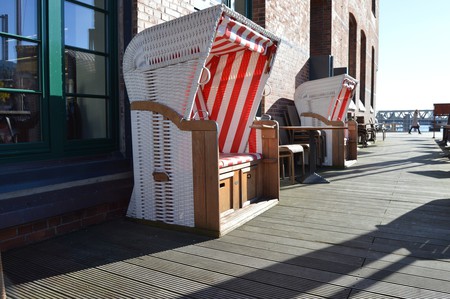 The North German port city of Hamburg has a character unlike any other German metropolis. Leave aside your stereotypes about Germany and the Germans, and find out more about the habits and peculiarities that only those who have called Hamburg their home will truly understand.

Greeting everyone with a Moin!

Forget about learning Guten Morgen, Guten Tag, and Guten Abend. When in Hamburg, all you need to know is one short little word: Moin. No one is completely certain, but it most likely derives from the Low German ‘moi‘, meaning ‘beautiful’ or ‘good’. No matter what the time of day (or night) it is, if you are greeting a shopkeeper or your oldest friend, salute them with a cool North German ‘Moin!’.

One of the favourite drinks of the people of Hamburg, especially in the summer, is Alsterwasser – literally, water of the Alster lakes. But lest you think this is a bit tame, know that this drink has little to do with water from the lake in the heart of the city. Well, perhaps aside from the colour. What in Hamburg is called ‘Alsterwasser’, or simply ‘Alster‘, is known elsewhere in Germany and Austria as a Radler. Namely, it’s a 50:50 mix of Pilsner beer and lemon soda, famed for its refreshing taste. 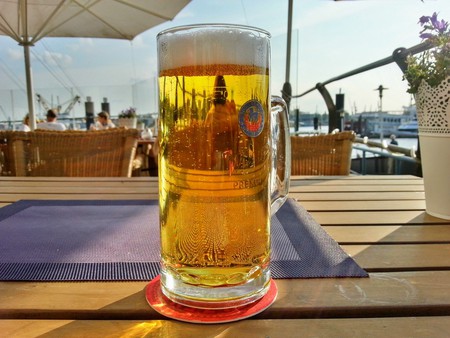 A beer with a view of the Elbe | Unsplash

Eating fish sandwiches after a night out

There is an unwritten rule if going out on the Reeperbahn party street on a Saturday night. You’ll likely dance until the clock strikes 5am, and then head to the nearby Fischmarkt for a bite to eat. Preferably, that bite should be a fischbrötchen – a sandwich with a fish of your choice. The Sunday morning fish market is also one of the city’s most popular tourist attractions. There’s live music, auctions for everything from fish to fruit baskets, and more beer to be had if you don’t want your night to be over just yet.

Every summer, Hamburg hosts the biggest parade in the world devoted to schlager music: the Schlagermove. Also known as the Festival of Love, or the carnival of the North, the parade is an unforgettable event. Where else in the world can you experience half a million people, dressed in their best 1960s-style hippie clothing, dancing to music blaring from 46 colourfully decorated trucks. If you have ever thought of the Germans as restrained, orderly people, this parade will shatter all of your stereotypes. 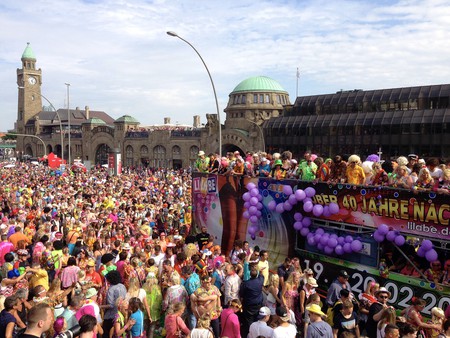 Hamburg may be a port city, but the seaside is almost 100km (62 miles) away. Fortunately, the locals don’t have to go that far to kick off their shoes and enjoy the feeling of sand under their toes with a Caribbean cocktail in their hand. There are more than 10 beach clubs in Hamburg, from ones that offer views of passing ships on the River Elbe – like Strand Pauli and 28 Grad Strandbar – to ones with views across the city’s skyline like Sky & Sand Beachclub. Several are open all year round so you don’t have to wait for the summer to enjoy a beach feeling in the middle of the city.

Soaking in every ray of sunshine

Not only do people of Hamburg locals enjoy beach clubs, there are not many cities in the world that could compete with their love of sun. As soon as the temperatures rise above freezing and a sunny day comes around, cafés and restaurants open their terraces. Walk through a pedestrian area in mid-winter, and you will find locals sitting outside, chatting with friends while enjoying a cup of coffee in the sunshine. And, of course, wrapped in warm blankets to avoid getting a cold.

The people of Hamburg love welcoming and bidding farewell to the largest visiting cruise ships, and they do it in style. The Queen Mary 2 that has been visiting the city since 2004 and stops by several times a year is especially beloved. Her arrival is eagerly awaited, special events planned for her brief stay, and the goodbye is celebrated by live music and fireworks, attended by thousands of people. In fact, Hamburg loves her cruise ships so much that there is a major public festival devoted to them: the Hamburg Cruise Days.

Holding a funfair in the middle of winter

Hamburg is home to Germany’s biggest and longest fair, the Hamburger Dom. It is held three times a year on the Heiligengeistfeld and visited by around 10 million people annually. And while today it also takes place in spring and summer, these fairs were added only in the 1940s. Meanwhile, the grounds have been hosting a winter funfair already since 1892. The locals love to stop by to enjoy their favourite rides, or simply for funfair food, mulled wine and beer. But the special highlight of the Dom is the Friday evening firework display. 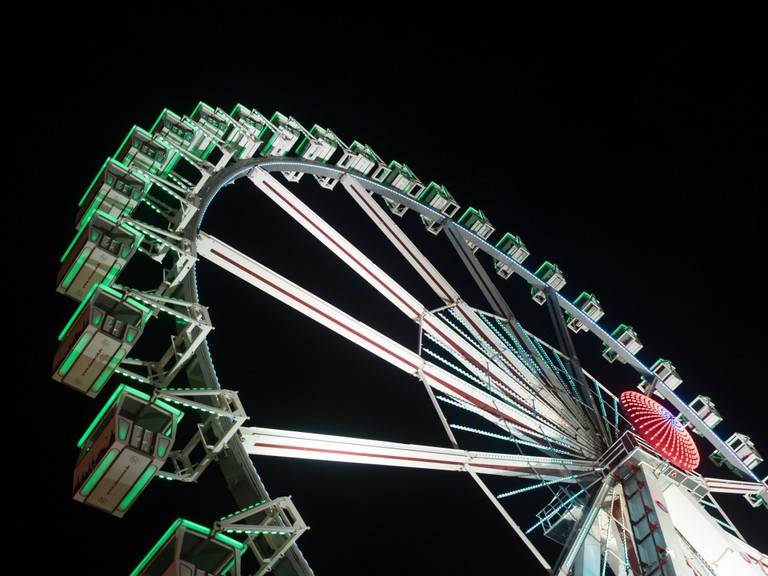 Hamburg has more millionaires than any other city in Germany. But, at the same time, it accepts – even celebrates – squatters who have taken over some of the prime real estate locations. The Rote Flora theatre has been squatted since 1989 and functions as a cultural centre. The Gängeviertel at Valentinskamp was occupied in 2009 to prevent an investor from tearing down the historic buildings and now hosts workshops, exhibitions and concerts. These and other projects usually enjoy support from the locals, and are seen as expressions of alternative political views and protection of public space from financial interests.

Not making a big deal about floods

In Hamburg, floods are a part of life. They inevitably happen several times a year, especially in the spring when the North Sea storms push water upriver. But the city is anything if not prepared. The embankments protect from water rising as high as 9m (9.8 yds.), there are hundreds of flood gates, and a modern warning system has been put in place. The new HafenCity district is outside the secured area so the bottom 7.6m (25 ft.) of the district’s buildings are completely waterproof and accessible by raised pedestrian passageways. The floods may come, but be assured that life will go on almost undisturbed!