10 Artworks By Caspar David Friedrich You Should Know 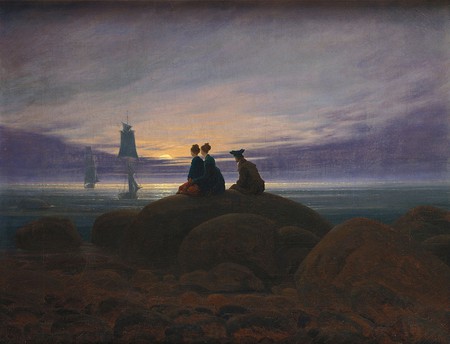 Hailed as one of the greatest painters of Romantic landscapes of his generation, German artist Caspar David Friedrich has produced stunning vistas that have earned him renown early in his career. By the end of his life, however, the artist has fallen from grace only to have his works misinterpreted by Nazi ideologues after his death. Since the 1970s, Friedrich has enjoyed a posthumous resurgence of sorts with his art finally appreciated for the landmark works they are. We take in ten of Friedrich’s most important works, from Winter Landscape to Wanderer above the Sea of Fog.

The Cross in the Mountains

The Cross in the Mountains – also known as the Tetschen Altarpiece – is one of Friedrich’s earliest, prominent works and today hangs in Dresden’s Galerie Neue Meister. First exhibited in 1808, the painting courted quite the controversy when art critic Friedrich Wilhelm Basilius von Ramdohr, who lambasted the work and accused the artist of sacrilege for including a landscape in an altarpiece and minimizing the of prominence of Christ and the cross. The following year Friedrich would, in quite an unusual move for him, defend The Cross in the Mountains, explaining its religious symbolism – for example, the rays of lights symbolizing the Holy Father – in a piece published in the then contemporary magazine Journal des Luxes und der Moden. 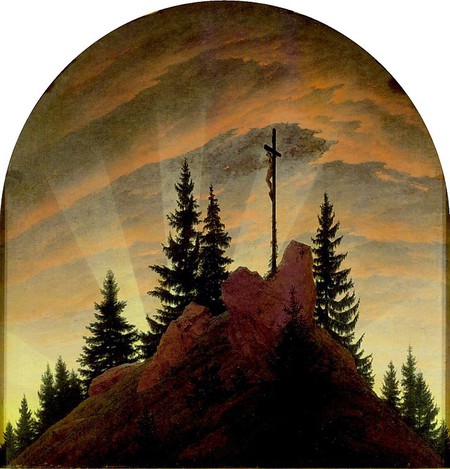 The Monk by the Sea

A grey, moody sky and stormy sea dominates in Friedrich’s The Monk by the Sea – perhaps the most radical of his paintings, at least in terms of composition and its lack of a repoussoir, or framing device, to pull the viewers gaze into the work. Many people who viewed the work during its 1810 exhibition criticized it as desolate and lonely. Nevertheless, despite its initial reception, art historians have cited The Monk by the Sea’s influence on later works including James Abbott McNeill Whistler’s Harmony in Blue and Silver: Trouville and the abstract expressionist canvasses of American painter Mark Rothko. 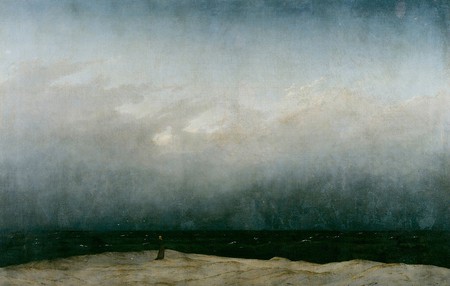 The Abbey in the Oakwood

A companion piece of sorts to The Monk by the Sea, The Abbey in the Oakwood today hangs side by side the earlier work in Berlin’s Alte Nationalgalerie. Described by Carl Gustav Carus, fellow painter and friend of Friedrich, as ‘perhaps the most profoundly poetic work in all of modern landscape painting’, the hauntingly evocative landscape features the ruins of Eldena Abbey near the artist’s hometown Greifswald in Germany – a location of clear significance to Friedrich and one that recurred in other works including his 1825 painting, Ruins of Eldena. 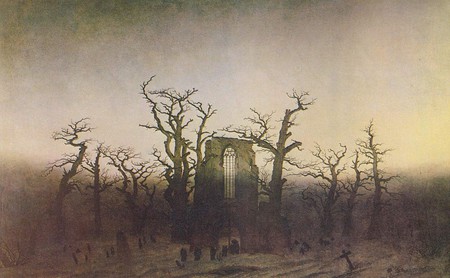 Notable as possessing a much lighter tone than many of Friedrich’s other artworks, Chalk Cliffs on Rügen was painted after the artist’s marriage to Christiane Caroline Bommer and their honeymoon trip to the German island of the title – which perhaps speaks for its levity and brighter hues. The three figures in the work are thought to be the artist himself, his wife and his brother Christian, and the colors of their clothing – blue, green and red – have been interpreted by some as representative of the three Christian virtues of faith, hope and love. 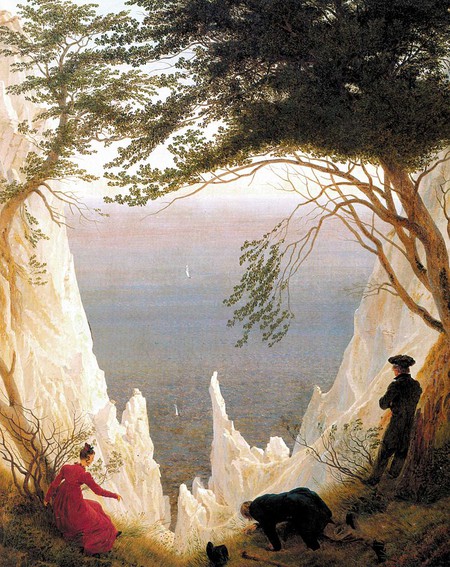 Man and Woman Contemplating the Moon 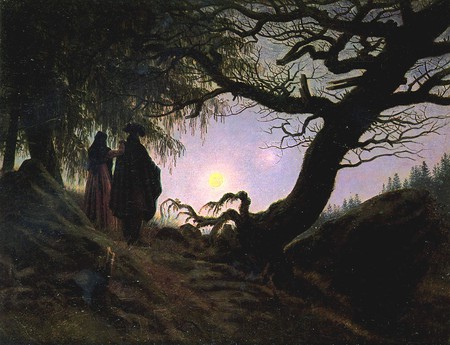 The Sea of Ice

Also known as The Arctic Sea or The Wreck of Hope, Friedrich’s 1823 works The Sea of Ice depicts HMS Griper – one of the vessels used in English naval office and explorer William Parry’s Arctic expeditions – shipwrecked on an ice sheet and is described by the Hamburg Kunsthalle, where the painting hangs today, as a representation of ‘the failure of man in a hostile natural environment’. An influential work, art critics have pointed to the work’s legacy in later Arctic-themed seascapes by artists including American painters Frederic Edwin Church and William Bradford. 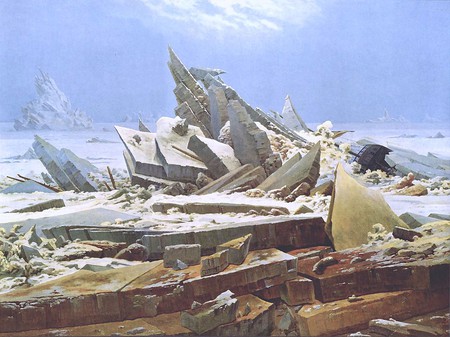 Wanderer above the Sea of Fog

Comprised of various landmarks from the beautiful Elbe Sandstone Mountains in Saxony, Wanderer above the Sea of Fog is another enduring landscape of Friedrich’s whose influence can be seen in other, later works including 20th century German painter Gotthard Graubner’s Nebelraume (‘Fog Spaces’) series – of which one edition was titled Erster Nebelraum – Hommage à Caspar David Friedrich. Historian John Lewis Gaddis put it best when he described the painting as having a contradictory impact on viewers, ‘suggesting at one mastery over a landscape and the insignificance of the individual within it’. 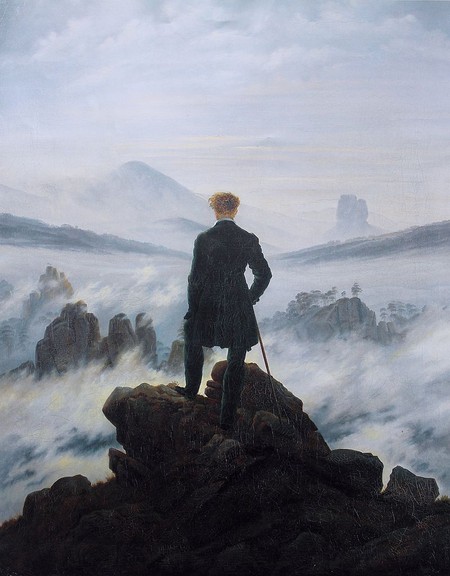 The first Friedrich oil painting to enter a public collection in Britain, Winter Landscape was acquired by London’s National Gallery in 1987, while a second, very similar version of the work resides at the Museum für Kunst und Kulturgeschichte in Dortmund. Notably smaller than many of his earlier prominent works, it is thought that the painting was originally intended for a private collector and symbolizes salvation through religion – as evidenced by the man sat in prayer before a crucifix in the foreground of the work and the distant Gothic cathedral in the background materializing forth from the mist, offering refuge. 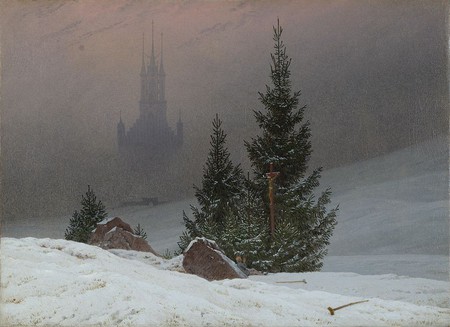 Moonrise over the Sea

Commissioned by German consul and banker Joachim Heinrich Wilhelm Wagener – along with its companion piece The Lonely Tree (also known as Village Landscape in the Morning Light) – as a series representing landscapes at different times of the day, Moonrise over the Sea today hangs with its pendant in Berlin’s Alte Nationalgalerie and features a recurrent theme in Friedrich’s work – that of ships returning to port at the end of the day. A similar, but much larger work of the same name, painted in 1821 and featuring four figures rather than three, resides at Russia’s State Hermitage Museum in St Petersburg.

The Stages of Life

One of Friedrich’s later works, The Stages of Life is an allegorical painting meditating on both the fleeting nature of life and the artist’s own mortality. The figures in the painting are identified as Friedrich himself (in the left foreground), his three children and his nephew, with each subject corresponding to the five ships in the background which represent the different stages of their own lives, the most distant symbolizing Friedrich in his old age – a work made all the more poignant and meaningful by the fact it was painted just five years before Friedrich’s death in 1840. 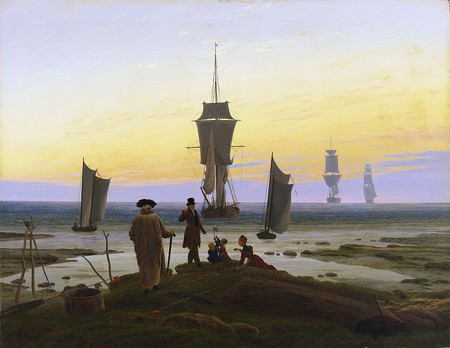