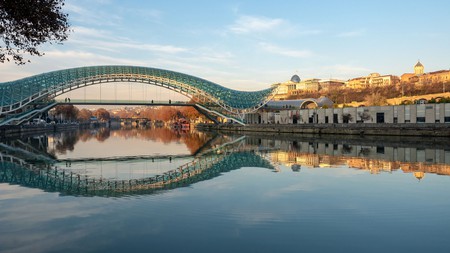 The Bridge of Peace spans the Kura River, and has become an emblem of downtown Tbilisi | Andrea Ricordi, Italy / Getty Images

Tbilisi impresses, intrigues and enraptures with its complex history, vibrant nightlife and renowned food and wine. Tbilisi expert Nino Shervashidze gives the lowdown on why the Georgian capital should be your next destination.

Housed within a former publishing house, Stamba Hotel is one of the coolest places to stay in Tbilisi, and is a popular meeting and co-working spot. Nino Shervashidze is brand communications coordinator for the Adjara Group, the firm behind the Georgian capital’s hippest accommodation and a driving force in Tbilisi’s rising fame as a vibrantly bohemian destination. 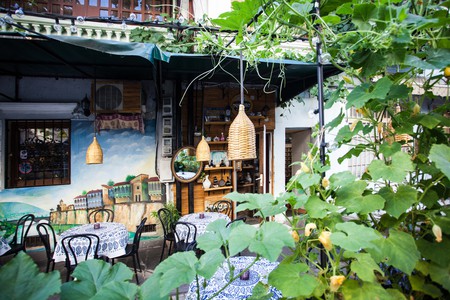 “Tbilisi is still undiscovered by most international travellers and even many local people,” reflects Shervashidze, who has lived in the Georgian capital nearly all her life. “This is a city where history and the present meet.” 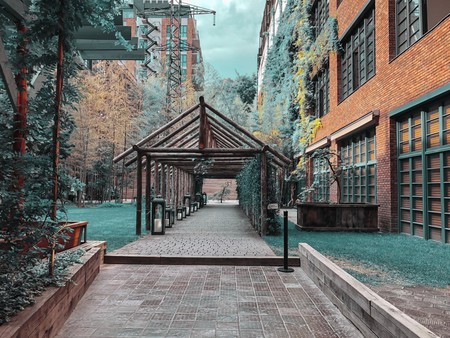 Tbilisi’s past is long and contentious, thanks to its ideal location along east-west trade routes. Legend dates it back to the fifth century, and its periods of independence have been interrupted by stretches of occupation by the Byzantine, Persian, Mongol and Russian empires. After a fleeting three years of post-Russian Revolution independence, the Soviet Union took over, before Georgia became independent again after the collapse of the USSR. 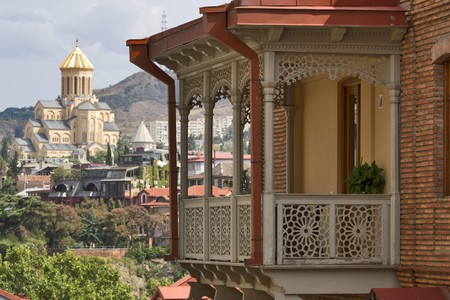 Walking through the city, its history is readable in the architecture; turning corners, you glimpse intricately carved wooden Persian balconies, while some streets are lined with austere Soviet constructions. A guided tour of the Old Town is an excellent way to fully appreciate the urban tapestry and get a Tbilisi crash course, but allowing yourself to get lost in the streets is the best way to take in the full fabric of the city.

Georgia’s recent tourism boom is due, in part, to Georgian hospitality. “Georgia generally has been known for hospitality, but once tourists arrive here, they experience a whole new level,” Shervashidze says. “I hear quite often, ‘Wow, this is something that we didn’t expect to be like this’, and that always feels good. Also, people don’t expect to build relationships with local people so easily. After arriving in Tbilisi, you feel like you are part of the society”. 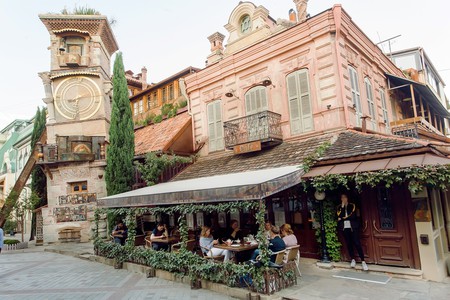 Shervashidze has lived in Tbilisi for most of her life but headed abroad in 2010 to work on her Master’s in PR and communications at the University of the Arts London. Rather than stay in the British capital – an experience Shervashidze says was “full of discoveries” – she decided to come back to Tbilisi: “The city’s arts and culture scene is developing at a fast pace, and there are many opportunities to be innovative, daring and creative. I believe that I am part of the generation that drives things forward when it comes to reimagining the contemporary face of Tbilisi.”

While Georgia’s past is fascinating, what might be even more exciting is how Georgians are using it to construct an identity for the future. “Georgians have always had a strong sense of identity because of our unique history, language, culture and religion,” Shervashidze says, and being a part of building the country and developing its modern identity is something she – as well as many other young Georgians – is passionate about. “Without the past there is no present spirit. There is little Georgia can do about its past,” she explains, “but there is a big opportunity for Georgia to introduce itself to the rest of the world as a stable and interesting country with traditions and uniqueness which connect it to its past.” 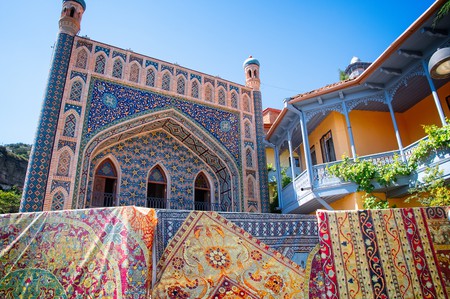 Shervashidze has already noticed a big shift when it comes to Georgia’s image abroad. “There was a time when it was difficult to find Georgia on the world map. Local people like me, who were travelling abroad, used to be the only ambassadors of the country,” she remembers, “Today, I notice that more international visitors are starting to discover and tell stories about their experiences of Georgia”. For those heading to Georgia for the first time, Shervashidze believes that spending time in the capital is a must, even if your adventure is taking you onward to other parts of the country.

The first thing to note is that Tbilisi is a city of neighbourhoods, so bring comfy shoes for wandering. Of course, the picturesque Old Town, with its churches, hilltop, gorge and bathhouses, is well worth exploring; Tbilisi’s character really shines, though, when you venture into a few different areas. “For sure Tbilisi is a city of neighbourhoods,” says Shervashidze. “It has always been this way. This aspect of the city can be felt by anyone who visits it”. 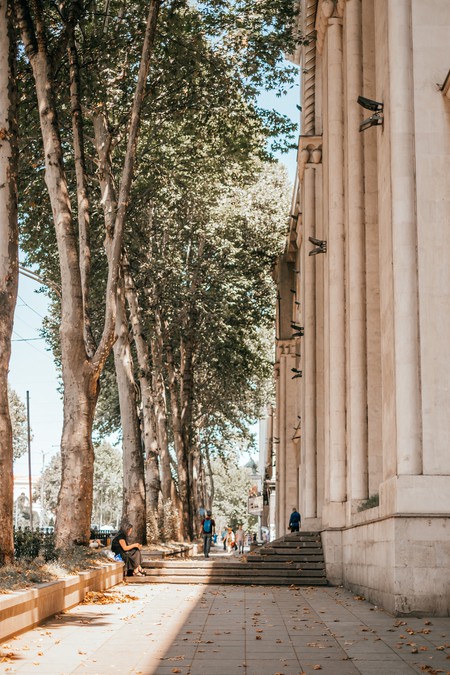 Shervashidze’s workplace is the industrial-chic Stamba Hotel, set in the Vera neighbourhood. Built in a former Soviet publishing house and crowned by a glass-bottomed rooftop pool, it shows visitors Tbilisi’s hip, modern side, while providing spaces for local residents to hang out too. Unlike some attempts, which can feel forced, it’s actually happening. On an August day in the courtyard that connects the hotel to its older (but much-loved) companion, Rooms Hotel Tbilisi, a diverse crowd sits in the sun with coffee (roasted in-house) and iced drinks, taking in the day while meeting with friends, collaborating on projects, doing business and working on laptops. There are studios in the hotel, which is also, as of September 2019, home to the Tbilisi Photography and Multimedia Museum. If you’re peckish, the hotel cafe is excellent, while the Pink Bar in the lobby, complete with crystal chandelier, is a fantastic place to go for sophisticated cocktails before dinner or clubbing. 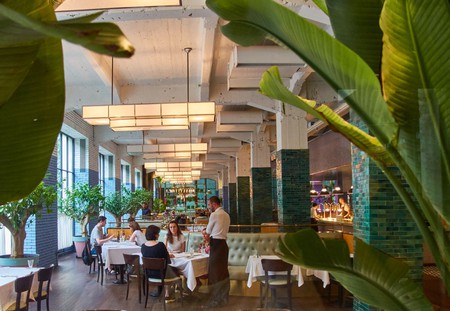 Nearby to the hotel, Keto & Kote is one of Shervashidze’s favourite spots for a typically hearty Georgian meal. “It’s another place for authentic food in an amazing old Georgian house with wooden architecture,” she says. The definition of a hidden gem, it has an extensive wine list (best enjoyed in the restaurant’s beautiful garden) and a stunning dining room with carved wooden rafters.

After a late dinner, Drama Bar is Shervashidze’s pick for a Vera night out. Located in a residential building – and with bouncers that run hot and cold with guests they don’t know (but are very friendly if they let you in) – the bar is one of the coolest spots in town for drinking and dancing to some of Tbilisi’s best electronic DJs.

After a late night out, while away some time the next day at the wonderful They Said Books, another one of Shervashidze’s favourite neighbourhood spots. Designed by the Tbilisi-born Lado Lomitashvili, the hip store aims to push Tbilisi forward by becoming a tastemaker for the city. The cafe-bookstore has an open-plan layout, all the better for local creatives to meet up and hang out while sipping coffee.

There’s more to Tbilisi than just this side of the Kura river, however; cross over to its eastern bank, and you’ll find more neighbourhoods that each stake their claim to a place in the urban fabric with distinct architecture and personalities. 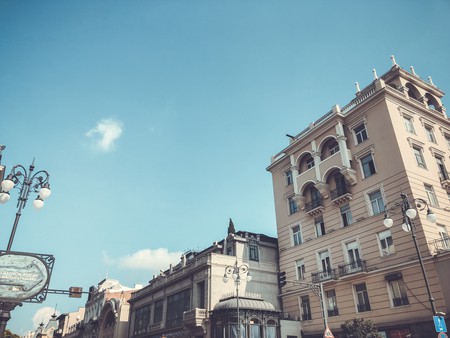 Over in gentrifying Marjanishvili – the city’s old German neighbourhood that now counts Georgian, Arab and Turkish communities among its residents – street art and rare Art Nouveau lattices and embellishments decorate buildings. The Soviets weren’t keen on the style’s flourishes and destroyed much of what existed in the city. A wander around Marjanishvili – also known as Chugureti – is best launched with a walk up the newly renovated Agmashenebeli Avenue, a pedestrianised, cafe-lined stretch that looks charming and is generally frequented by tourists. A trip to the city’s largest bazaar, near Dynamo stadium, isn’t something to miss either – it sells anything and everything.

Then, Shervashidze suggests, head to Fabrika, a hostel in a former Soviet sewing factory that’s far more than just a backpacker’s crashpad. It’s one of Tbilisi’s most important recent developments, thanks to a massive courtyard bordered by concept stores featuring local artists and designers, and a multitude of places to have a Georgian beer. 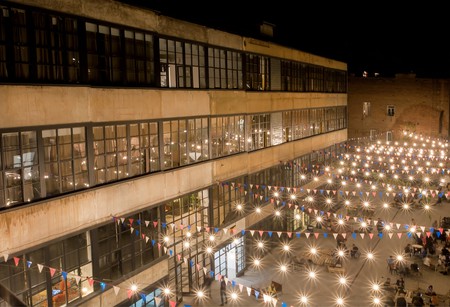 It’s easy to while away an afternoon at Fabrika, thanks to the sheer amount of spots to check out – there’s a record store, plant shop, ramen restaurant, a men’s barber shop complete with cocktail bar, and Black Dog Shop, a studio store where you can find copies of vintage posters as well as fantastic art by emerging Georgian artists. With so much to see, caffeine is necessary. Shervashidze’s favourite spot among the options is Milk, a cosy coffee shop boasting a state-of-the-art La Marzocco machine.

A five-minute walk from Fabrika is another one of Shervashidzne’s haunts: Shavi Lomi, a restaurant from a craft brewery of the same name. It’s overseen by local celebrity chef Meriko Gubeladze, who gives traditional Georgian foods creative, surprising twists – she’s often given credit for kicking off Tbilisi’s foodie revolution. 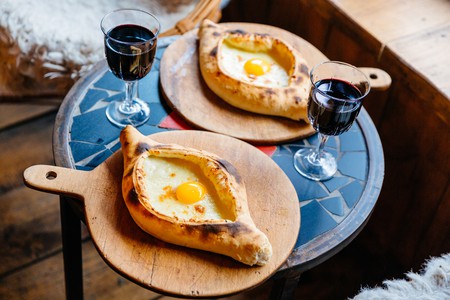 Of course, these aren’t Tbilisi’s only two must-see neighbourhoods. “Before, when people asked me about how long they should stay in Tbilisi to get the full experience of the city, I used to tell them that two-three days would be enough,” says Shervashidze. “Now, there are so many things happening – festivals, clubs, internationally acclaimed cultural events and social and cultural hubs – that I advise my foreign friends to spend at least two weeks in Tbilisi so that they can experience it to the full.”

And, she adds, there’s a whole other world outside the capital: there’s Kakheti, the region where 70 percent of the country’s wine is produced; along with plenty of skiing in the Caucasus mountains in the winter, and some gorgeous nature for exploring on foot in warmer seasons. No matter how many times you visit, Georgia, it seems, will call you back again.