Where to Ski and Snowboard in Georgia

As winter approaches, ski lovers get excited. And what could be better than to hear about the lesser known ski resorts that await you in Georgia? The country is famous for being the mountain pearl of the Caucasus region. Therefore, winter here is full of excellent opportunities for snowboarders, skiers, free riders and snow lovers. We have compiled a list of the best Georgian ski resorts for you to choose.

Settled on the south-facing plateau of the Greater Caucasus Mountain Range, Gudauri enjoys maximum exposure to the sun, making it an all-year-round tourist destination. The mountain slopes are covered with snow between December and Apri at the elevation between 1,990 and 3,279 meters. There are 57 km of slopes available for skiers and snowboarders, and the average snow depth on these slopes reaches 2.5 meters. 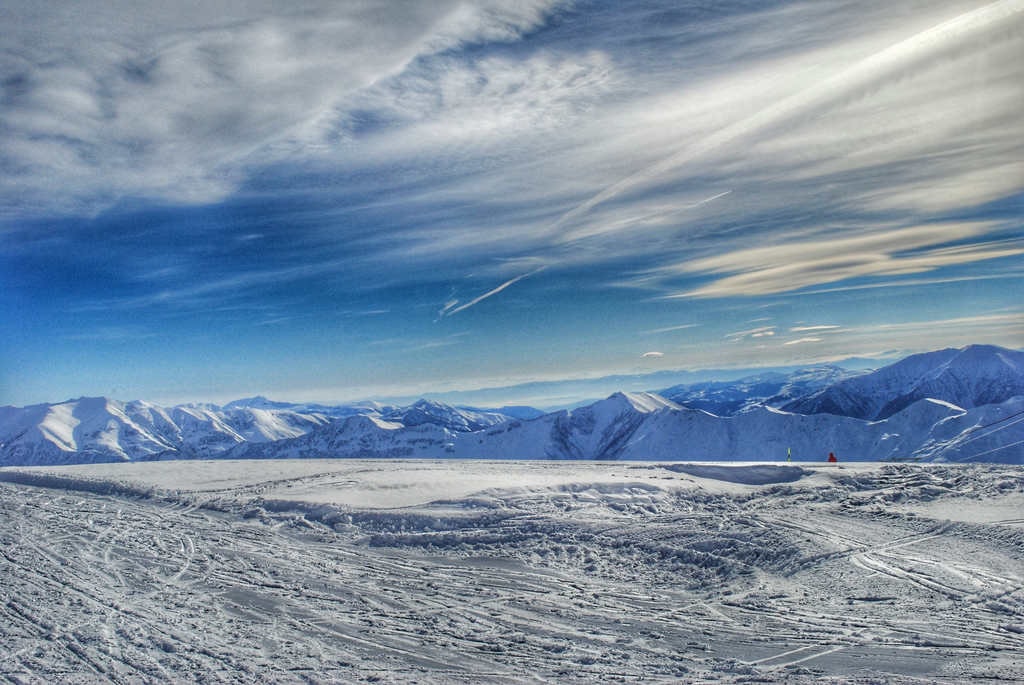 Skiers of all levels can find remarkable opportunities for slalom, giant slalom, downhill skiing, and even the world famous heliskiing, for those who love to indulge in extreme challenges.

The slopes are accessible via several platter lifts, chairlifts, and a cabin lift. The base lift here is situated over 2,200 meters above sea level, and the top lift is at 3,285 meters.

Gudauri is one of the most advanced and popular ski resorts in Georgia. Moreover, it’s one of the closest to the capital too. Locals love to escape over the weekend and unwind from a busy working week at the resort. Therefore, weekends can be really hectic.

If you are keen on freeriding and heliskiing, Gudauri won’t disappoint you either. Large amounts of natural snow on the surrounding peaks of the resort, make an ideal place for powder enthusiasts.

With only 26 km of slopes available for skiers and snowboarders, Bakuriani is a favorite resort for families with kids. Situated on the northern hill of Trialeti Range, the resort is at 1,700 meters above sea level and is very close to Borjomi. Take a railway called “Kukushka” from Borjomi and enjoy gorgeously snow-covered spruce forest along the way.

Bakuriani is one of the oldest ski resorts in Georgia. The first skiing infrastructure was installed in 1932. Skiing in Bakuriani is not easy as in Gudauri. The ski runs go along the spruce forests and Kokhtagora ski run is one of the best steep skiing runs for professional skiers.

The climate at Bakuriani is known for its many curative factors. Fresh air from high mountains, spruce and beech forests, lots of sunshine and high levels of ultraviolet rays can be beneficial for sufferers of  lymphadenitis, anaemia or chronic non-tuberculosis illness of respiratory tract.

Situated at an elevation of 2,000 meters, this ski resort in a coastal region of Adjara (109 km away from Batumi)  is unique in its nature, beautiful scenery, fresh air, and well-equipped tracks laid out over  eight km of slopes.

Goderdzi is an all year round resort, offering alpine hiking, horseback riding, and paragliding in summer, while in winter snow covers the slopes from November to April. Visitors have the opportunity to taste the local curative mineral spring waters and visit Goderdzi fossil forest, which is one of the unique in the world. Free riders can find excellent powder snow here.

Both ski resorts are situated in Svaneti region which covers the central Caucasus peaks and the most massive glaciers with a total area of 300 sq. km.  The average elevation of the Caucasus ridge is up to 4125 meters which means the skiing season lasts until the end of April.

The first ski resort in Svaneti, Hatsvali, is only eight km away from the central town of Mestia. It’s a relatively new resort offering 4.4 km long slopes to skiers and snowboarders. It’s lower lift is situated at an altitude of 1,865 meters and takes you up to the mountain Zuruldi (at about 2,347 meters above sea level). There are also two smaller ski lifts for those who want to warm up a little bit before skiing down the big runs. Adrenaline junkies will find Hatsvali a great place to freeride or try some backcountry skiing.

Tetnuldi, the second resort, is also a new addition to Georgian ski scene. The name comes from a legendary mountain Tetnuldi and the resort offers skiing with magnificent views of the mountain along another prominent peak Ushba.

The resort is 15 km away from Mestia and is a similar size to Gudauri. Three lifts take you to an altitude of 3,165 meters from where you can ski down several pistes; the longest one is 9.5 km long. Similarly to Hatsvali, Tetnuldi is an excellent place for freeride and backcountry skiers.