The Ultimate Guide to Hiking the Caucasus Mountains 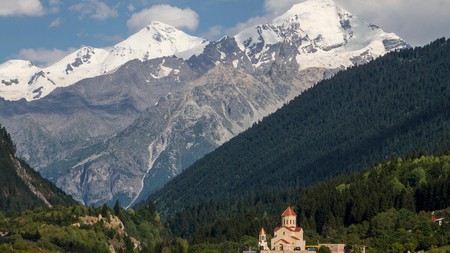 A church in Mestia, Georgia, with the Caucasus Mountains in the background | © MehmetO / Alamy Stock Photo

Spanning Georgia, Azerbaijan, Armenia and parts of southern Russia and encompassing a diverse array of ethnic groups, the Caucasus Mountains are the stuff of real adventure. Snow-capped mountains dominate skylines and following old Soviet trails combines mesmerising landscapes, isolation and a sense of the unknown.

You can now visit the Caucasus Mountains and a whole host of other fantastic destinations with Culture Trip on our epic nine-day Georgia adventure, led by our local insider.

The Caucasus Mountains stretch southeast from southern Russia near the Black Sea to Azerbaijan’s Absheron Peninsula on the Caspian Sea, straddling the boundary between the Eurasian and Arabian tectonic plates. Two distinct ranges exist, the Greater Caucasus to the north – around 1,200km (746mi) long – and the Lesser Caucasus to the south – around 600km (373mi) long. A corridor of relatively flat plains extends northwest through Azerbaijan and Georgia between both, characterised by fertile farmlands, forests and vineyards. The Greater Caucasus contain Europe’s tallest peak, Mount Elbrus, at 5,643m (18,510ft), in Russia. 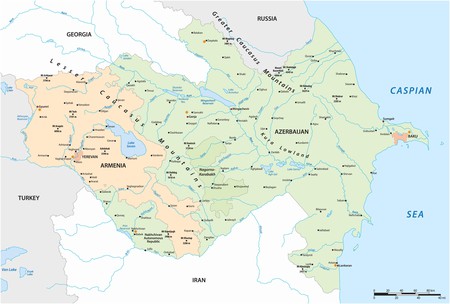 Where to go hiking in the Caucasus Mountains?

One of the biggest appeals to hiking in the Caucasus Mountains is also its greatest pitfall in terms of ease of accessibility for travellers; its vast expanses of wilderness, far removed from civilisation. Unlike in many mountainous regions in Europe, hiking isn’t a mainstream recreational activity among the locals. Not many officially marked trails exist and those that do might merely be cow trails with a tendency to vanish under constant exposure to the elements. But if you head to the right areas, the rewards are spectacular.

Despite the relative lack of hiking infrastructure across much of the region, more trails are opening in Georgia as tourism continues to grow, meaning the untapped potential of hiking in the Caucasus Mountains is gradually becoming a reality. Most Georgian treks tend to follow the northern border with Russia, lasting several days at a time.

One of the most popular trails connects Mestia – the central hub of the Svaneti region in the northwest of the country – to the remote mountain village of Ushguli. It’s around a 45km (28mi) trek which takes four days to complete, featuring rugged mountain scenery as well as a number of traditional village communities with guesthouses for overnight stays. Another excellent trek takes you between Omalo and Shatili, the main villages of the Tusheti and Khevsureti regions in the northeast part of Georgia, passing by several ancient fortresses and traversing the dramatic Atsunta Pass at 3,431m (11,257ft) – a more strenuous, five-day hike covering a variety of terrain from grassy meadows to rocky ridges.

Wildlife enthusiasts will relish the hiking trails in the Lagodekhi National Park – a small nature reserve of forests and lakes in the Caucasus foothills in the far east corner of the country. It’s home to an abundance of biodiversity including golden eagles, wild boars, chamois and even a small population of brown bears and grey wolves. Architectural wonders such as the Ananuri Fortress Complex (overlooking the idyllic Jinvali reservoir) and the majestic Gergeti Trinity Church (close to the Russian border) in the north-central region of Georgia are also well worth folding into your Caucasus itinerary.

With Culture Trip, you can explore some of the most captivating sections of the Caucasus Mountains as part of a small group of like-minded travellers and local expert guides on our Riches And Ruins trip to Georgia. 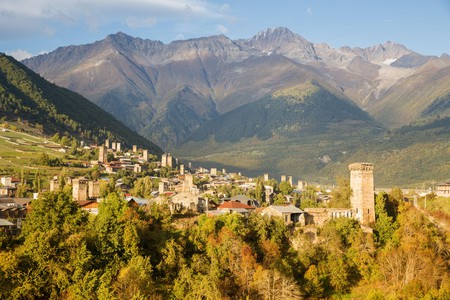 In Azerbaijan, you’ll find even fewer marked hiking trails – but the opportunity to visit ancient mountain villages and learn about the local cultures attracts the adventurous. Travel north from Baku to Quba, a region on the Shahdag Mountain’s northeastern slopes at 600m (1,969 feet). Little more than 40,000 residents call Quba home in this striking landscape that combines awe-inspiring mountains and rich cultural heritage.

Several villages of particular historical and cultural interest include Khinalig at more than 2,000m (6,562ft), Lahij and Saribash. Most trails are shepherd and cattle paths, so your best bet is finding a local guide who knows where they’re going. The small, medieval city of Sheki lies on the forested lower slopes of the Greater Caucasus on the old Silk Road and is an ideal place to immerse yourself in Azerbaijani culture and explore some fascinating Unesco-listed architectural sights, such as the intricately decorated Khan Palace. 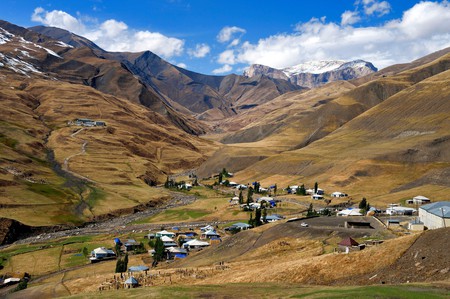 An ambitious project began in 2015 to create a 1,500km (932mi) route connecting the Black and Caspian Seas via the Caucasus Mountains. Still in its infancy and using crowdfunding, the Transcaucasian Trail aims to become the first easy-to-follow trail across the region. When it opens, hikers will traverse peaks reaching 5,000m (16,400 feet) and for the first time, outsiders will have the opportunity to experience the diversity of Caucasus culture, language and landscapes on foot via one easily accessible trail. Some sections in Armenia and Georgia are already complete.

Mount Elbrus, reaching 5,643m (18,510ft) at its summit, holds the title of Europe’s tallest mountain. Compared to other extreme climbs across the world, Elbrus, near the Russian-Georgia border, is relatively accessible (but by no means an easy feat). Expeditions tend to take less than a week to the top. Climbing permits are required and expert guides are essential. Either find a guide based in or out of Russia and remember to factor in obtaining a Russian visa if you plan on adding Elbrus to your Caucasus adventure. 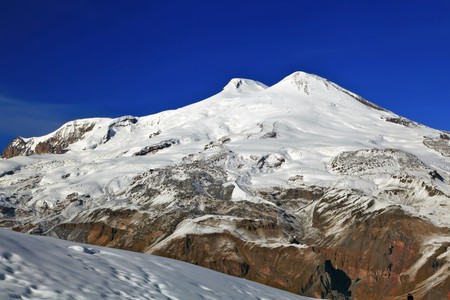 Because of its diversity, the Caucasus region remains politically unstable. Getting from one destination to the next might not be as straightforward as it seems. Southern Russia in the Greater Caucasus and Georgia have breakaway republics, including Russia’s Chechnya and Dagestan and Georgia’s Abkhazia and South Ossetia.

Hiking in the Caucasus is still very much in its infancy, but as the former Soviet Republics continue to change and embrace tourism, visitor numbers are bound to increase in years to come. Visit now to still feel like you’re on an exhilarating expedition into the unknown. Return in the future – and hiking from village to village might well be the norm.