Guram Rcheulishvili (1934–1960) is one of Georgia’s most celebrated writers. Though his life was tragically cut short – dying at the age of 26 trying to rescue a girl from drowning – Rcheulishvili’s career was furious and Rimbaud-esque, producing a multitude of short stories, most of which were published posthumously. In a first ever English translation of Kitesa by Ollie Matthews, Rcheulishvili’s tender prose and allegorical flavour is captured in this touching short story.

Kitesa lay dying. His grandson was playing at the end of the couch.

stood on it and pulled grapes off the end of a vine. Kitesa saw very well

what he was doing but he had not the strength to tell him off. “Where

the bloody hell is that kid’s father?” he moaned to himself. “The old

cow had to go and die now, didn’t she?” he said, remembering his

daughter-in-law. “If he reaches it, he’ll pull the whole vine down.” He

grew weaker, and he closed his eyes slowly. Then all of a sudden, he

heard his grandson fall down on the floor with a thud, and with it, the

sound of him crying.

He had become an old man.

The villagers measured the years by him.

“He’s all a bit washed up now, is old Kitesa,” they said.

He was over a hundred years old.

Once he had been a young man.

He tried to remember this time before he died. He had wanted to

feel sorrier for himself. He dug around in his memory, he tried with all

his might, but he only saw a spade before him.

A spade and black soil, or a clay pit.

He could just about make out his wife, but she was covered by the

A spade and black earth.

He lost all strength. He could no longer worry about his grandson,

longer anything hidden behind the spade.

Kitesa was born during the reign of the third from last king. He grew

up without any clothes on his back. When he reached the age of seven,

they clothed him in rags. The soles of his feet were tough. His father

furrows. He would cut his callused feet on the head of the spade, then

they would heal and harden.

Time passed in a flash.

When he had finished, he was sent on to somebody else.

Whereas their soil was too clayey for vines to flourish, at the new

place the soil was black and it was easier to dig.

break. He would go and buy a new one himself.

He could not remember where the time had gone.

Then he got married.

Then his wife died.

Then he married again.

He had four children with this wife. Two died and two lived.

Then this wife died too.

Then he married his neighbour’s widow. He had four children with

Then he went far away to work on the land.

When he was working on building the road to Svaneti, his first-born

died, and the second-born drowned in the river. Despite this he worked

through the spring. Both babies were buried by the roadside. On their

One of the other workers brought him the news of his wife’s death.

He took the pittance he had earned back to the village; it all went on

Then he worked on the roads for a year.

In Qaraiazi the soil was black, and it was easy to dig.

Three years later he was in Racha. The ground there was stony, and

he would often break the head of his spade.

His children died off one by one. Only one of them, a son, survived;

he grew old without having married, then at the age of eighty

he took a wife. They say that he had taken an oath. Most people

thought there was something wrong with him. The village kids

used to follow him wherever he went and throw stones at him.

At the age of eighty-four, four years after he had got married, Kitesa’s

son had a child.

Then Kitesa’s daughter-in-law passed away.

Now the family consisted of a grandfather, a ninety-year-old son,

and a six-year-old grandson.

The son was digging in the vineyard.

The grandson had been weeping and was drying his eyes.

Again, Kitesa saw his spade before him. It seemed to him that the

blade was blunt and the shaft was broken. He made to sit up so he

could shout at the boy, but as he looked round he could not make sense

of anything, and he lay down again.

And so the little one carried on playing.

And then he died.

It was a summer.

in the vineyard. Vines could barely grow there in the clayey soil. They

lowered him into his resting place, and scattered some clay on top. His

body took up quite a bit of space, and there was some earth left over

that they left on the grave, before tidying it up a little, and that was

Then somewhere Kitesa’s son rummaged and found a spade shaft,

broken in two; he nailed it together to make a cross, and he stuck it at

the head of the grave. 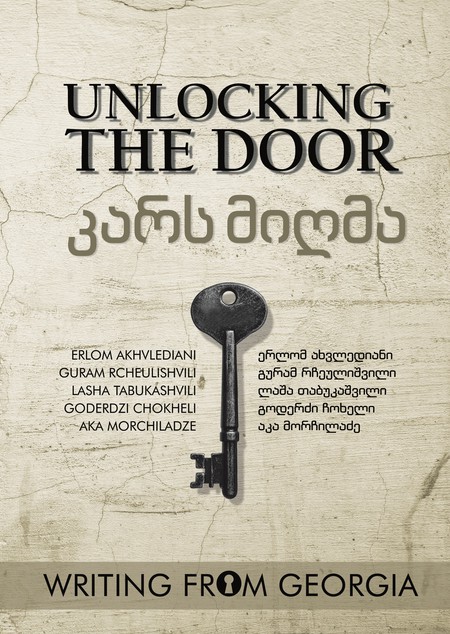 Kitesa and more works by Guram Rcheulishvili can be read in Unlocking The Door, a collection of stories and plays translated into English by students at Oxford University, supervised and edited by Lia Chokoshvili. It will be published by Cezanne in January 2018.