There are plenty of places of worship around the globe in remote locations, but this one goes the extra mile. In the rural western region of Georgia stands the world’s most isolated church. The Katshki Pillar, which locals refer to as “the pillar of life” stands 131ft (40m) tall and houses a 1,000-year-old church at the top.

Within the rock structure there is a crypt, three hermit cells and a wine cellar. At the base, there is a church, as well as the ruins of an old wall and belfry. 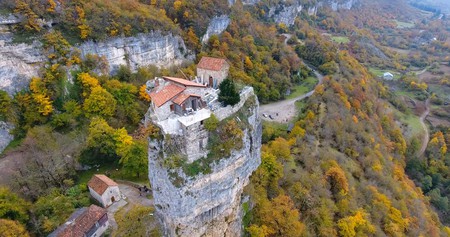 The early medieval building dates back to the 9th or 10th century but was abandoned until 1944 when mountaineers went up for the first time in decades. The only way anyone could get up to the top – if they were feeling brave enough, was a rusty iron ladder which is now closed off to the public, so don’t plan on going up there if you want to visit the location.

Around 125 miles (201 kilometers) from the capital city Tbilisi, the landmark is rather difficult to reach. There are also no trains to the area, so the only way of getting there is by car or bus. The final part of the journey is a 20-minute hike through a dramatic Georigan landscape, so make sure you wear your walking boots and pack a camera.

Believe it or not, there is a single monk who lives in complete seclusion at the top. Maxime Qavtaradze made the church his home in 1993. He told photographer Amos Chappele during an uncommon interview in 2013 that he made the decision to live on the pillar because he was seeking a much-needed change in his personal life; after being released from jail for drug-related offenses, he decided that isolating himself was the best way to reconnect with God.