How To Make the Most of 24 Hours in Tbilisi, Georgia 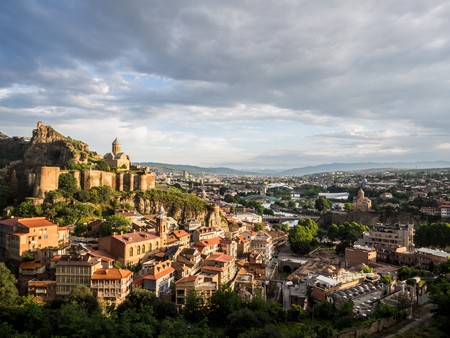 Whether you’re stopping over on your way to Georgia’s Kakheti wine region or are in town for a city break, 24 hours in Tbilisi is just enough time to hit the highlights of the Georgian capital.

Enjoy a guided walking tour of Tbilisi with Culture Trip on our small-group nine-day Georgia adventure, led by our local insider.

Georgia’s dynamic capital has so much going for it – a rich food and wine culture, vibrant nightlife, storied history reflected in a patchwork of diverse architecture and even hot springs – that you’d be hard-pressed to fit it all into a few days, much less 24 hours. But if you really have only one day in Tbilisi, this quick-hit itinerary will ensure you experience all the highlights. 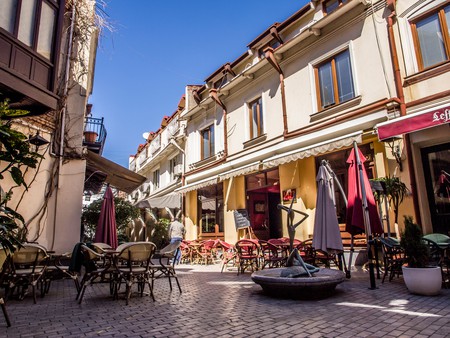 Breakfast isn’t generally a big occasion in Tbilisi – cafés generally don’t open until around 10 or 11, with most local residents starting their morning with coffee and a quick snack. But you’ll need energy for the day ahead: Skola Coffee and Wine Bar is located a 10-minute walk from Freedom Square, a common starting point for tours and a good central point from which to start your city exploration. The coffee is some of the best in the city, and the breakfast menu is solid, with the rice, quinoa or oatmeal porridge all hearty standouts. While Tbilisi’s centre is easy enough to navigate on your own, signing up for a tour with a local guide can give you a deeper, more personal glimpse into the capital’s history. You can also enjoy a guided walking tour of Tbilisi with Culture Trip on our small-group nine-day Georgia adventure, led by our local insider.

While options continue to expand with the influx of visitors, GetYourGuide partners with local operators for private and group tours that provide a particularly engaging “Tbilisi 101”-style introduction to the city’s history. The Old Town walking tour gives you historical and cultural context that’s tied to the present, with visits to the Orthodox Anchiskhati Basilica (Tbilisi’s oldest church) and the modern Bridge of Peace, which lights up with LEDs in the form of the Georgian flag at night. If there’s time, take the funicular from Rike Park, near the Bridge of Peace, to Narikala Fortress: the views on the way up (and from the top) make for Instagram-worthy pictures. 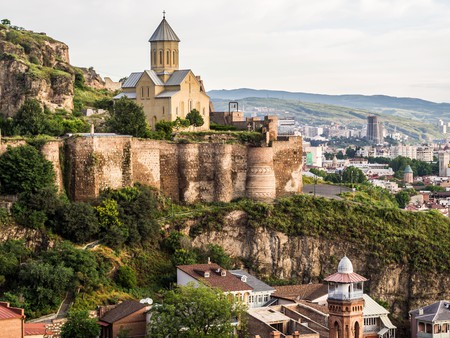 After all that walking, sit down to two of Georgia’s best national dishes. The cheesy, carb-y comfort that is khachapuri is a must-try whether you have two hours or 24 in Tbilisi, as is another traditional favourite, khinkali. They’ll both fill in the gaps from a lighter breakfast and set you up right for the rest of the afternoon’s explorations. Stop into the elegant Keto & Kote, named after what’s considered Georgia’s first comic opera, to slurp down brothy meat khinkali (Georgia’s national dumpling), khachapuri (traditional cheese bread, the ultimate in comfort food), rotating seasonal dishes and a fantastic wine list. You’ll want to call ahead for reservations, and keep in mind that service can run a little slow. Like many wonderful restaurants, it’s a little tucked away: if you get to a dead end, you’re in the right place. 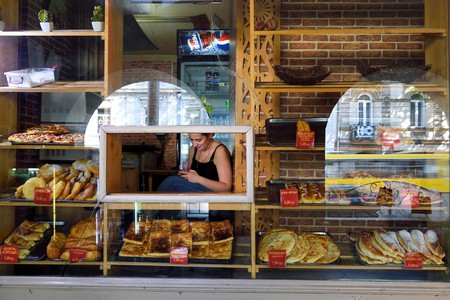 Sweat it out at the sulphur baths

Tbilisi’s nightlife is calling, but before you begin your evening, go for a soak in one of the Georgian capital’s sulphur baths. Tbilisi’s restorative waters are, legend has it, part of the reason the city was founded: a king was hunting with his falcon (in some versions, there are two) when one (or both) of the birds of prey fell in and died in the hot waters, leading him to realise he (or his ill-fated falcons) had stumbled upon something unusual. So, he decided to build a city on the very spot. The bathhouse district (Abanotubani), located in the Old Town, offers plenty of dome-roofed bathhouses to choose from.

It’s up to you whether you go on your own or with friends, nude or in a swimsuit, in a public bath or a private one, but a great place for a sulphuric soak is at Chreli Abano – you’ll know it immediately by its stunning mosque-like blue-tiled façade. Basic private rooms start at 50 GEL per hour (£13.35); ones with dry saunas and other perks are 120 GEL an hour (£32). For an extra 20 GEL or so (about £5), you can get a very thorough scrub-down called a kisa, which feels both invigorating and relaxing after a morning walk around town. (Just go easy on the menu of spirits you can order to your bathing room – you still have a long night ahead!) You can also visit Tbilisi’s sulphur baths on Culture Trip’s specially curated nine-day Georgia trip. 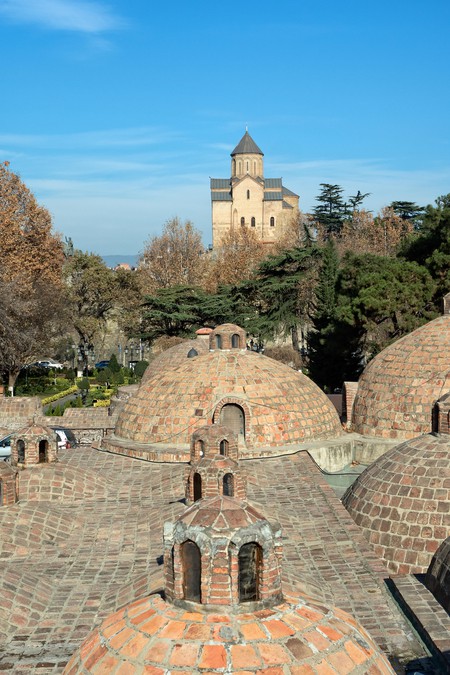 Sip your way through Georgia’s wines

Despite Georgia’s long history of (and passion for) wine-making, wine bars are still a fairly new concept in Tbilisi; instead, wine is traditionally had with meals or at the hours-long Georgian banquet tradition called a supra, where it’s not unusual for guests to drink two litres of wine each over the course of the meal. If your liver isn’t quite up to that, head to a wine bar to get a taste of Georgia’s vineyard bounty. Lida Vardania, who co-owns the highly regarded g.Vino wine bar, says that wine bars were “non-existent” in Tbilisi a decade ago. Hers – the second in the city – makes a great stop if you want to sample wines from around Georgia without leaving town. If you’re not too full from lunch, order one of g.Vino’s tasting boards, which overflow with regional hams, cheese and bread, or choose a snack from the Georgian tapas menu. 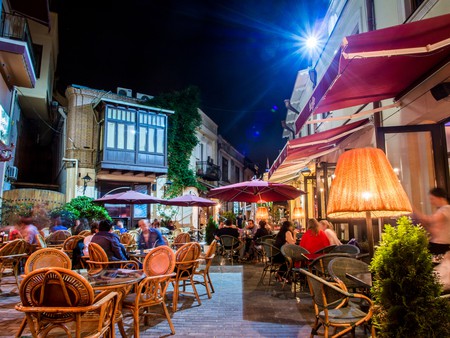 Relax in the courtyard at Fabrika

Walk off the wine with a half-hour meander over to Fabrika, a hip complex anchored by an eponymous hostel built in an old Soviet factory, for some pre-dinner beers. Along the way, head up Agmashenebeli Avenue, one of the longest avenues in the city with pastel Neoclassical architecture you’ll want to keep your camera app open for. Once at Fabrika, find a spot in its lively courtyard, strung with jaunty bunting and lights and dripping with vines (or, should you rearrange the itinerary a bit and come here earlier in the day, browse the shops and studios that surround the courtyard and feature local artists’ work). Check out Black Dog Shop and Flying Painter for local designers’ clothing and reproduction vintage posters to tuck in your suitcase. Also around the perimeter of the courtyard are cafés selling wine, beer and cocktails, perfect for enjoying al fresco at the picnic tables. There’s also the excellent Milk Coffee Shop, which turns out espresso drinks on a La Marzocco machine if you want more of a pick-me-up (or sober-up) than buzz. 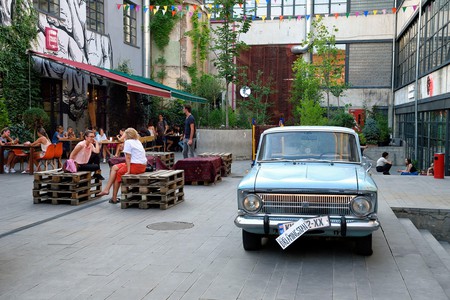 Be sure to key in Shavi Lomi (Black Lion)’s location into Google Maps because, while it’s less than a 10-minute walk from Fabrika, this restaurant doesn’t have a sign out front. Instead, look for the painted black lion mural on this otherwise nondescript, alley-like street. Inside, the restaurant is decked out with shabby chic furniture in cosy, wallpapered rooms, while the menu invites customers to tuck into traditional dishes with innovative twists: try the khachapuritos, for example, akin to quesadillas using fresh lavash bread rather than tortillas. Make reservations ahead of time: this living-room-style restaurant is a popular place to dine out for Tbilisi’s artistic crowd, thanks to both its culinary creative streak and its location in the stylishly bohemian Marjanishvili neighbourhood.

After a long meal, end your night – and begin the next day – on the dance floor. Tbilisi’s techno-driven nightlife often gets compared to ‘90s-era Berlin, and while the two cities often share DJs, the Georgian capital has an energy to its nightlife all its own. Head to Mtkvarze, a former Soviet-era fish restaurant on the left bank of the Mtkvari river, to take your chances on getting past the door and onto its dance floor, usually pulsing with minimal beats spun by well-known names in the techno world. Or, head to Bassiani, located in the old basement swimming pool of Dynamo stadium, which is now home to both Georgia’s national football team and a resident DJ who’s played at Berlin’s infamous Berghain.