How Georgians Celebrate the New Year 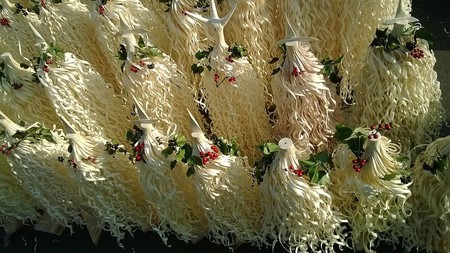 It’s that time of the year when cities are adorned with beautiful decorations and lights to lend a little extra cheer, while people get festive and full of positive emotions. Each country has its own traditions for celebrating the New Year or Christmas, and Georgia is no exception. As this special occasion is almost here, we present the how Georgians celebrate the New Year, with its weird but exciting traditions.

You read that right. Georgia does indeed celebrate the New Year twice in one year – on January 1 and again on January 13. Why so? Because, according to the Julian calendar, used by the Eastern Orthodox Church, the real New Year falls on January 13, and Georgians called it Old New Year.

However, the most significant celebration comes on December 31, when the family sits around the table very late in the evening and has the proper dinner of the day. Thus, no one congratulates each other with “Happy New Year” until the New Year “officially” arrives at 12 am on January 1. Champagne or sparkling wine is popped open as the clock strikes midnight, while kids run in the yards to set off some fireworks.

Similar to the Old New Year’s, Georgians have a modified date for Christmas compared to those countries who celebrate it on December 25. In the past, it was marked on December 25; the proof is the Christmas song called “On December 25th.” But the customs have changed, and now the proper celebration of it is set on January 7, identified by the Orthodox Calendar as well. Georgians even bake a special Khachapuri called Guruli Gvezeli (Guruli pie) specifically on this date.

Georgians put their own Christmas tree called chichilaki alongside the green one. Made from a dried hazelnut tree, the tradition of chichilaki comes from the western part of the country. Instead of sparkly ornaments, the chichilaki is decorated with an assortment of dried fruits and flowers. The tree branches are shaved until it produces curly strings that look like a small coniferous tree.

Chichilaki is believed to be the tree of luck, which should be burned on January 19. It’s a symbolic expression of letting the troubles and misfortunes of the previous year stay in the past.

This is a superstitious habit. Meklve is the first guest after New Year’s Eve, who is thought to bring goodwill and happiness to the hosts. In the past, Meklve was a male guest who would bring sweets and fruits to the family. But nowadays, the gender does not really matter. In the past, every family tried to have a person with positive emotions, so that the person’s personality reflected the New Year. Nowadays, though, the custom has changed a bit, and people often do not put as much thought into it.

Georgians do believe in faith and they even have a special day dedicated to it. The “Day of Faith,” or Bedoba in Georgian, is marked on January 2. It’s believed that how a person spends this particular day will have an impact on the whole year. So everyone tries to make a special day out of it and plan activities throughout the day.

The essentials of the New Year’s Eve supra

The traditional feast of the New Year has its customs as well, with which everyone tries to comply. The main course of the supra is called satsivi, a turkey or chicken stew in walnut sauce. An oven-baked pork rubbed with ajika – a thick chili paste – is also a must-have dish on the table. The rest of the meal includes additional staples of Georgian cuisine such as phkali, eggplant in walnut sauce, salads, marinated vegetables, or Holodets, a Russian aspic dish made for the occasion from a beer or pork broth.

The festive dinner also calls for a special dessert called Gozinakhi, made from honey and walnuts. Additionally, a large plate is filled with churchkhela, dried figs, persimmons, and black plums, as well as fresh fruits and candies.