What happens when you’re too good and not good enough all at the same time? Welcome to Georgian rugby. The Eastern European powerhouse dominates second tier rugby, but they are still being denied the opportunity to step up through a mixture of politics, bureaucracy and confusion.

Last weekend Wales beat Georgia in Cardiff in what was a pretty poor game. It was marred by the controversy just before the final whistle, when Wales’ gamesmanship prevented Georgia launching one last attack through their dominant scrum and potentially drawing the game. Despite that, Georgia were still pleased to have simply been given the fixture in the first place and, ideally, would love a lot more of the same. 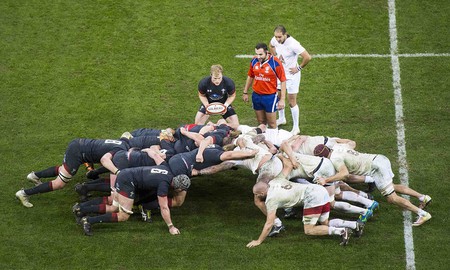 World Rugby, the sport’s governing body, organises its member nations into three tiers. The first is made up of 10 sides, with six European countries competing in the Six Nations and four southern hemisphere nations from the Rugby Championship. Tier Two features 14 countries dotted around the world, while the remaining members (development nations) make up Tier Three.

In European rugby, the Six Nations is the elite competition. Originally for just the home nations (England, Wales, Scotland and Ireland), it expanded to include France in 1910 and more latterly, Italy, in 2000. The annual competition is where the very best of European rugby compete and test themselves against one another. There are fierce rivalries, built on decades of needle, but it’s also where the sport’s money and status is.

For the European nations competing in Tier Two, in the imaginatively titled and incredibly catchy Rugby Europe International Championships, Georgia have outgrown their rivals. In the last 10 years the Georgians have won the competition eight times. A flick through the record books of that competition highlights their dominance, with the most wins, longest run of consecutive wins and most points in a single match all held by The Lelos.

For the majority of rugby fans in Europe it’s easy to overlook Tier Two. It’s rarely, if ever, on television, with little to no reporting of the results, but Georgia is rugby country. Fans pack out stadiums to watch their side compete in the country’s national sport – one of very few nations in the world where rugby union is king. New Zealand, Wales and, somewhat surprisingly, Madagascar, are some of the others. Incredibly, Georgia have just 11,000 registered players and yet and are on the verge of joining international rugby’s elite.

Rugby’s popularity is unsurprising given its similarity to the traditional Georgian sport of lelo burti, or ‘field ball’, which involved rival villages carrying a ball towards the opposing side’s creek. The Georgia Rugby Union was founded in 1964 and the sport developed steadily under Soviet rule, with Georgians representing the USSR.

Since the Rugby Europe International Championships started in 2000, Georgia have been the team to beat. It was also in 2000 that Italy joined the Five Nations, turning it into the Six Nations. Aside from flickering moments of victory, Italy have struggled over the past 17 years and are no closer to the other nations than when they joined. They have finished bottom on 12 occasions, only won 12 games (out of 85) and never beaten England.

The Six Nations is a brutal, intense competition. It’s not supposed to be easy, but the Italians should have made a greater impression and today they remain the whipping boys. They depend heavily on their captain and talisman Sergio Parisse – their only genuine world-class player – but at 34 his retirement is looming and there is no obvious replacement. 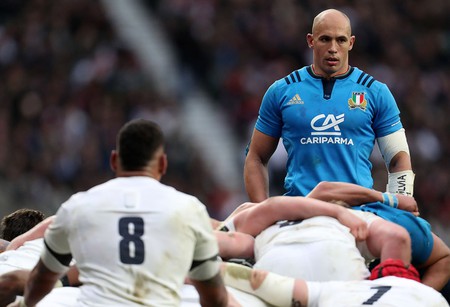 Adding Georgia into the mix would be one solution, but increasing it from six to seven teams seems a stretch given the congestion of the international rugby calendar. There are also serious questions regarding the amount that rugby elite players are being asked to play and the long-term damage it is doing to their bodies.

An alternative would be a relegation/promotion system, something that happens between Tiers Two and Three. If Italy had fully established themselves in the Six Nations and performed better over the last decade there would be less clamour for Georgia’s inclusion at their expense, but a number of different factors have aligned, making it harder to ignore.

If Italy had shared their collection of wooden spoons with other sides, or if Romania, Russia and the like had managed to prevent Georgia from winning so many Tier Two titles (it’s worth stating Romania pipped Georgia to the title in 2017), then it would be harder to justify. But Georgia are deadly serious about being given a shot at the big time.

The issue with a system that involves relegation and promotion, however, is that the Six Nations has to be prepared to lose England from the competition. This is extremely unlikely to happen given England’s performances, but by introducing relegation, it becomes a possibility, minute or not.

England are, financially, the most important part of the Six Nations. As a rugby union they generate the most revenue and are the most commercially viable nation by some distance. Losing them would be financially catastrophic to the competition and as unlikely as the situation may be, why would the Six Nations powers-that-be potentially put themselves in that position? As a result, Italy breathe a huge sigh of relief and Georgia keep plugging away and banging at the door.

What you’re left with is Italy consistently being handed out beatings from the other Six Nations sides, and Georgia in a weird sporting limbo, where they regularly beat the teams they play but aren’t deemed good enough to play better teams. Perversely, or not as the results suggest, Georgia are ranked higher in the world than Italy.

It’s one of sport’s oddities, something that gets muddled by rulings and red tape, becoming ever-more difficult to solve given the factors in play. It’s not unlike cricket, with nations like Ireland and Afghanistan wanting a crack at Test cricket, given the performances of their one-day sides, but being denied the chance by the International Cricket Council (ICC).

Outside from World Cup years, when lower-ranked teams get put into groups with the top sides, Georgia have played a Tier One side on just two occasions in the last 11 years. Rugby nations generate their revenue from playing big games against top sides, so outside of the annual Tier One competitions, games are split into tours, with Europeans heading to the southern hemisphere during the (European) summer and then hosting them in November. 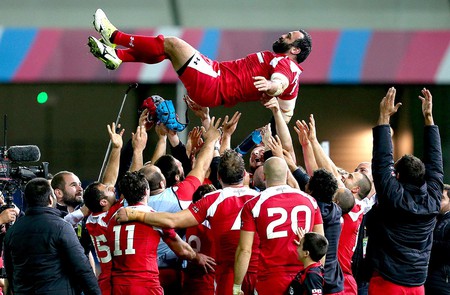 Davit Zirakashvili of Georgia is thrown in the air by his team mates after the IRB Rugby World Cup 2015. | © Kieran McManus/BPI/REX

Last weekend’s match between Wales and Georgia was something that the Georgians were incredibly thankful for. In fact, by agreeing to the fixture, the Wales Rugby Union (RFU) have sacrificed a potentially more lucrative game, against South Africa, for example.

No team enjoys playing Georgia. Without reverting to stereotypes or clichés, they are a team that thrives on an enormous pack – even by rugby’s standards – with brute strength matched with exceptional scrummaging technique. The Top 14 in France is littered with Georgian forwards, with the likes of Clermont Auvergne, Montpellier, Brive and Toulon all putting out packs with an Eastern European grunt.

It’s also worth highlighting that the two most recent additions to elite rugby, Italy and Argentina (the latter joining the Rugby Championship in 2012), both progressed with similar styles of play, utilising their power and strength up front to compete against the very best, even if it meant their backs lacked the same skill set as their opponents.

Argentina have fared far better than Italy. Their progress has stalled recently, but they have a fourth-place finish to their name at the 2015 Rugby World Cup and have developed more creative players among their backs than their Italian counterparts. Setting up a club franchise that now competes in the southern hemisphere’s premier club competition was supposed to be the next step in their development, with the majority of their players playing together regularly for the recently-formed Jaguares (a professional rugby union team based in Buenos Aires), assisting them at international level, but it hasn’t quite worked as intended. That said, they have proved that they are worthy of Tier One status.

For the Georgians, they must keep doing what they’ve been doing. Over the last decade they have surpassed the likes of Russia, the USA and Canada, as well as more traditional rugby playing nations like Tonga and Samoa (although the Pacific Islanders are blighted by financial difficulty). The USA is held up as the next big market for rugby to crack properly, given its potential player pool and financial revenue. But Georgia have far more to gain given their traditions with the sport, rather than playing fifth, sixth or seventh fiddle to the likes of baseball, football, basketball and the rest.

The fact that they have improved significantly is astonishing given their lack of elite opponents. They will play Wales again at the 2019 World Cup, and it will be interesting to see if they get closer than they did on Saturday. The coaching set-up is secure and well thought out, with a development structure in place that is clearly working. Continued domination will, at some point, become too great to ignore. However, it’s likely that any promotion is still some way away. The Georgians must rely heavily on factors outside their control – the agreement of the unions of the current Six Nations sides, World Rugby’s own stance and, without sounding harsh, Italy’s continual slide.

The whole situation has created a perverse dichotomy, where Georgian rugby can be immensely proud of their accomplishments and yet incredibly frustrated because of those same achievements. World Rugby should be aiming for as many Tier One teams as possible; the more quality teams the better, rather than a cliquey “old boys’ club” trying to maintain the status quo. There is a huge array of logistical issues to address to help make it happen, not all within World Rugby’s remit, but if someone knocks long and hard enough at a door it has to open at some point.