Georgia's 10 Contemporary Artists and Where to Find Them

Haunted by their Soviet past, Georgian contemporary artists find themselves still struggling to share their work. The economic difficulties that have plagued the country since independence in 1991 are often blamed for the lack of a permanent contemporary art museum in Tbilisi. Despite this however, Georgian art flourishes. We find out more about ten of the best contemporary Georgian artists.

Alexander Berdysheff graduated from the Tbilisi State Academy of Fine Arts in 1988 with a degree in Graphic Design. To continue his art education, he studied at the Glasgow School of Art. His oil paintings combine figurative and textual components and often feature distorted objects. The basic concept behind his work is showcasing deformation and chaos through the use of precise detail and sharp lines.

Ana Chaduneli is of the younger generation of Georgian contemporary artists. Born in 1990, she received her education at the Tbilisi State Art Academy and the Center of Contemporary Art in Tbilisi. She works mainly with video, sound, graphic, installation and photography. While the message of her work may not always be immediately obvious, it forces the viewer to dig deeper and observe with an open mind. 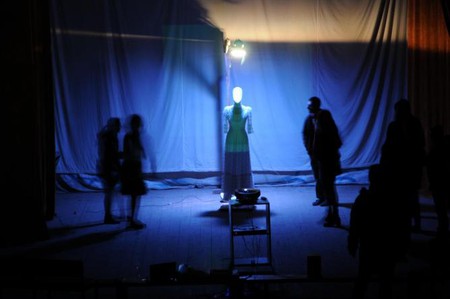 Like many of Georgia’s other contemporary artists, Eka Abuladze also graduated from the Tbilisi State Academy of Fine Arts. Her paintings are kept in galleries around the world, including the Brooklyn Museum in New York and Russian president Vladimir Putin’s private collection. Eka’s exquisite use of color is both thought provoking and inspiring. In addition to painting, she also runs an art studio in Tbilisi where people of all ages can learn the main disciplines of painting, drawing, decorative art and art history.

Performance, photo, video, painting – Kote Jincharadze does it all. Born in Tbilisi in 1962, Kote Jincharadze was very aware of the political, economic and cultural situation in his country and reflects this in his art. After attending the Tbilisi State Academy of Art, he kick-started his career in the 1980s by showing his work at local exhibitions and abroad. His pieces are often inspired by public and individual reaction to specific events, emphasising ideas of freedom and transformation.

Now based in New York, Levan Mindiashvili was born in Tbilisi in 1979 and graduated from the Tbilisi State Academy of Arts. He completed his post-graduate studies at The National University of Art in Buenos Aires in 2012. He has collaborated on several multimedia projects with fellow Georgian artist Uta Bekaia and together they have produced projects in film, fashion and visual arts. Levan is very interested in architecture and urbanism and these are both strongly reflected in his work.

or at Project ArtBeat

Maka Batiashvili works with a variety of media including painting, video art, book illustration and documentary film. She was born in 1975 in Tbilisi and later attended the Tbilisi State Academy of Arts. The inspiration for many of her pieces comes from ordinary moments, where the subject is required to keep a sense of balance despite being on the verge of something. Her pieces are dominated by simple shapes and bright colors, which come together perfectly to create emotionally charged masterpieces.

Nino Morbedadze graduated from the Tbilisi Academy of Fine Arts in 1982 and has had her work showcased in many exhibitions since. Her work defies categorization but is often described as nonconformist with surrealist and expressionist influences. Her paintings are often narratives featuring a protagonist in mythical venues. Nino’s paintings have been shown at several of Tbilisi’s most prominent art galleries, such as the Gala Gallery, Baia Gallery and Vanda Gallery.

or at Project ArtBeat

Ushangi Khumarashvili was born in the eastern Georgian town Dedoplistskaro in 1948. Due to limited alternatives in the world of Georgian education, he too attended the Tbilisi State Academy of Art. Since 1990, he has been working with various types of media including painting, performance, objects and installation. He uses abstract, as well as, figurative imagery, strong brush strokes and expressive color in his contemporary works. He is inspired by the questions of the human subconscious and this is reflected in his paintings.

MoMa Tbilisi Museum of Modern Art is the closest thing that Tbilisi has to a contemporary art museum, yet it only houses the artwork of the famous Georgian-Russian artist Zurab Tsereteli. Zurab Tsereteli is a sculptor, painter and architect known for many famous pieces including the ‘Freedom Monument’ (also known as ‘St. George Statue’) located in Tbilisi’s Freedom square. His works sometimes receive strong public criticism for being too pompous and in recent years, many have been rejected by their intended recipients.

Zura Apkhazi works with a variety of materials to create his masterpieces and not only paints, but also produces sculptures and installations. Born in the Georgian city of Gori in 1968, like many other aspiring artist he had to move to the nation’s capital to pursue his dream, attending the Tbilisi State Academy of Arts. His work often focuses on political issues and incorporates modern cultural icons, such as Marilyn Monroe or Mickey Mouse. His work is famously intriguing and makes the viewer pause for a moment to reflect on the concept behind the art.