A Year in 16 Georgian Festivals 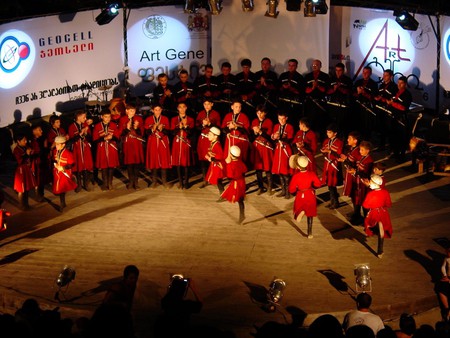 To truly experience Georgian culture and its many traditions, you must attend a few of the festivals held both in the capital and throughout the country. The majority of festivals are hosted in Tbilisi throughout the year, so you’d be safe booking a trip to the city during the following months. Here’s the ultimate guide to Georgia’s celebrations you don’t want to miss.

New Wine Festival is a new addition to the festival scene and focuses on wines made from late harvest grapes. Vessels of wine are unsealed in springtime, and wine producers bring them out for locals to taste and add to their collection. The festival has changed venues each year, and the number of participating companies has increased as well. If you are new to Georgian wine, this is the best place to taste at least 60 different local varieties, some of which are only sold here.

Tbilisi International Book Fair is another important event held in Tbilisi. Over a span of two days, dozens of Georgian publishing houses present their books to hundreds of visitors. Here you can find books by local authors, as well as foreign writers. The fair also includes interview sessions with writers, so you can ask those questions that have been on your mind.

The only international documentary film festival in the region, CinéDOC-Tbilisi brings some of the most influential stories to the capital. If you are a documentary film enthusiast, you have the opportunity to view documentary films created with unique visions, sympathetic protagonists and original visual styles. The film screenings are usually followed by debates and Q&A sessions.

Tbilisi Open Air is an annual international music festival that emphasis rock and electronic music genres. First held in 2009, it quickly became popular among locals and youngsters from neighboring countries. The festival’s program varies each year and has hosted artists like Morcheeba, Akvarium, Air, Adriatique, and Beth Hart to name a few.

The event usually lasts three-four days in a remote area outside the city center. It starts in the late afternoon and continues until early morning. Several stages host a variety of performers, so visitors will never be at a loss for good music.

The coastal city of Batumi is home to an international jazz festival held annually in July. The first event was held in 2007, and the festival now includes R&B, disco, hip-hop, soul and funk. Lisa Stansfield, Hugh Masekela & Band, Macy Grey, Sergio Mendes, Al Jarreau, and Kool and the Gang have performed here, among other well-known jazz musicians. The festival is so famous that the tickets sell out very quickly.

Art-Gene is for those who want to experience Georgian culture, folk music and dance. The event traditionally takes place at the Ethnography Museum in Tbilisi during the summer months. Unlike many other festivals held in Tbilisi, Art-Gene can last for several days, even up to ten days.

Held in Anaklia (another Black Sea coastal town in the Samegrelo region), Gem Fest is for electronic music lovers. The first festival was held in 2015 and it brought 123 international and Georgian artists to the stage. It was attended by 10,000 guests over a span of nine days. During the last two years, Gem Fest’s performer list has included M.A.N.D.Y, Boka Shade, David August, Ellen Allien, Who Made Who, Dubfire, and more. It looks like the next fest is going to be just as impressive, so be sure to book around the 9-12 of August and reserve your tickets.

Despite the fact that Tbilisi’s foundation date is unknown, Tbilisoba is still the most important celebration in the country. Held for the first time on October 28, 1979, Tbilisoba was celebrated on the last weekend of October for years afterward. This was the time when harvests were over, the weather was still warm during the day, and leaves had begun to change their color. However, for the past several years, the government has moved the festival to September. The dates have varied each year since.

During the festival, the central streets of the city are closed to cars and transformed into a space for an open-air fair, where different vendors sell locally made products. Here, you can try wines, cheeses, sweet delicacies like churchkhela, and vegetables straight from a nearby garden. You can also buy handmade accessories and clothes. Apart from shopping, you can catch a small performance depicting Georgia’s history, folk music, and traditional dance. The festival is completed with a gala concert and fireworks.

This annual international theater festival is one of the capital’s most significant cultural events. Taking place annually since 2009, the Tbilisi International Festival of Theatre is held from the end of September through the beginning of October. The festival’s program includes international and local theater companies, as well as workshops, masterclasses, and exhibitions.

The season of harvesting wine grapes in Georgia (Rtveli) is a major event, which traditionally starts in late September and continues through mid-October across Georgia. As the country is the oldest wine-producer in the world, the tradition of Rtveli dates back to ancient times. When the harvest is over, the producers hold a feast, or supra, and celebrate the year’s good harvest.

BIAFF is an annual film festival held in Batumi, a coastal city in the Adjara region. The idea of the festival is to intensify cultural exchange, recognition, and collaboration between producers, filmmakers, and film critics from different countries. The program varies each year and consists of competitions for international features, documentary films, and young filmmakers. Films by famous directors are also screened at this festival. You’ll find screenings of films made in countries and regions along the Silk Road like Caucasus, Iran, Turkey, Central Asia and China.

The GIFT festival is another theater festival that brings local and international performances to Tbilisi in autumn. Dedicated to Mikheil (Michael) Tumanishvili, a Georgian theater director, the festival showcases the unique theatrical culture of Georgia.

Kolga Tbilisi Photo has been running for 16 years bringing international and local photographer exhibitions to Tbilisi. Exhibitions have featured images depicting unforgettable contemporary moments. The event also hosts photo contests and a new variety of photographers each year, making it a whole new experience each year.

Tbilisians love jazz; thus, alongside the Black Sea Jazz Festival, the capital has its own jazz event in autumn. Similar to the summer jazz festival, this event brings international singers and performers from all around the world.

As the name suggests, this festival showcases all of Georgia’s different cheese products. Here you can try products from small enterprises, factories, and farms. Since 2015, the festival has broadened its scope and brought Azerbaijani and Armenian cheese producers to the capital. Cheese Fest features some of the rare cheeses that can’t be found in supermarkets, such as dambalkhacho – a soaked cottage cheese that is sometimes dried or tightly woven into an edible braid (tenili).

Tbilisi is home to another photo festival, which was co-founded by French photographer Lionel Charrier and Georgian journalist Nestan Nijaradze. Launched in 2010, the festival quickly gained popularity and became one of the most important cultural events in the Caucasus. You can find stunning works from photographers in Asia, Europe, and the Middle East.

Benjamin Le Brun from The Eye of Photography in the program of the Night of Photography. Check it on September 16, from 8 pm at #fabrikatbilisi #benjaminlebrun #theeyeofphotography #photography #magazine #tbilisi #festival