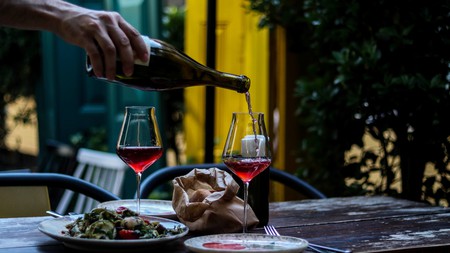 There’s nowhere on earth that scientists have found older evidence of wine production than in Georgia, where they’ve discovered sediment from wine dating back 8,000 years. Don’t expect to find too many merlots and chardonnays here, though; while those varietals are used in some wines, the focus in Georgia is on grapes indigenous to the country – bold saperavi and ancient rkatsiteli among them (the latter dates back to the first century) – and, traditionally, on a style of wine production that uses qvevri. These large earthenware jars are buried underground to age the wine, resulting in a particularly aromatic vino. Guram Maisuradze, sommelier and manager at Tbilisi wine bar g.Vino, gave Culture Trip his Georgian wine 101: from rich, hearty reds to rustic, crisp amber wine.

Tbilisi’s g.Vino wine bar has a cosy outside area | Courtesy of g.Vino

The region’s long winemaking tradition is closely interwoven with Georgian culture. Vast quantities – one to two litres per person aren’t unusual – are traditionally put away at supras: lavish, hours-long banquets where it’s not out of the question to see someone drinking out of a horn (kantsi). On the more low-key end, wine bars, a relatively recent development, are popping up across Tbilisi. These establishments offer a great introduction to the products of Georgian vines, with many wine bars serving bottles that can’t be found anywhere else, thanks to the country’s traditionally small-scale production.

Nonetheless, production was at a record high in 2018, says Maisuradze. There were 86.2 million bottles exported that year, with most going to Russia, Ukraine, and China. Slowly, however, they’re making their way to shelves to farther-flung places like the US and UK. There’s been a growth of 73% since just 2012, driven in large part by encouraging government policies – along with record numbers of tourists. 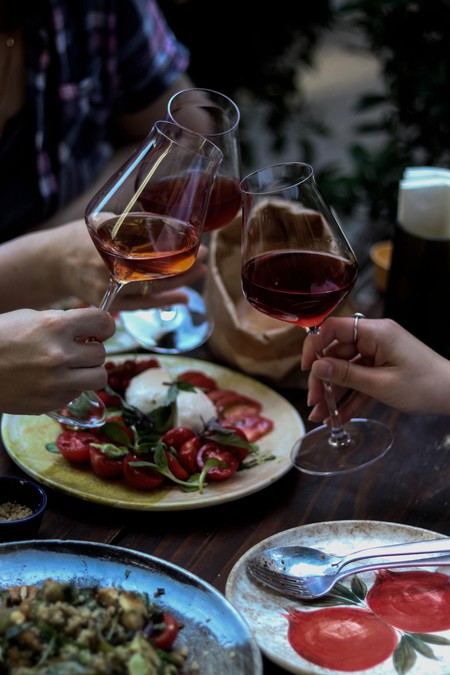 For a real sampling of Georgia’s bounty, says Maisuradze, head to Tbilisi – or to wine country itself. Maisuradze’s workplace, g.Vino Wine Bar in Tbilisi, was founded in 2015 as just the second wine bar in the city. It’s a welcoming spot where each bottle is hand-chosen by the gracious couple who owns the bar, Lida Vardania and Mamuka Maisuradze (Guram is a son of Mamuka’s cousin). The wine bar is also known for its great tapas-style small plates – a pairing the couple chose in an attempt to introduce the culture of drinking wine by the glass. 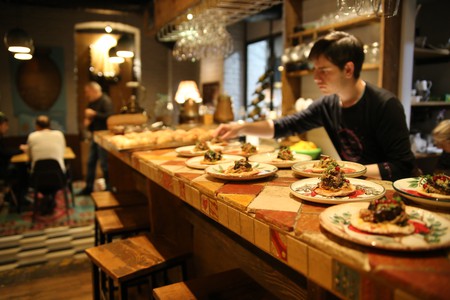 g.Vino offers a range of small plates to complement the wine | Courtesy of g.Vino

Georgia grows over 500 varieties of grapes within its borders, which comprise about one-sixth of the world’s types of grapes. However, only 40 are used in commercial production. Some, you’ll likely only encounter during a visit here: from full-bodied, bracing dry reds to semi-sweet wines and the country’s famous amber wine. 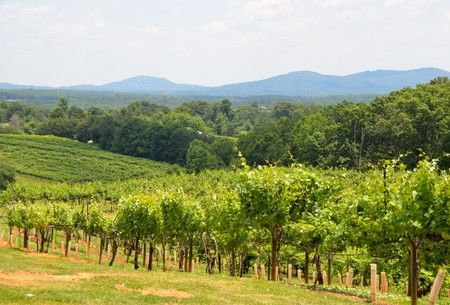 Also, just because Georgia is typically billed as a budget-friendly destination doesn’t mean the wine is cheap – it knows it’s good, and it’s priced accordingly. While wines are available at a range of prices, says Maisuradze, “If you want really good wine with quality, it should cost approximately at least 15 euros (£12.50) per bottle. Natural wines in Georgia usually cost from 15 to 25 euros (£12.50 – £21).”

Besides the unique grapes and dynamic taste of Georgian wine, it’s long been rumoured to have health benefits. Local winemakers say that the qvevri process, where grapes are fermented on their skins and seeds, the parts of the grape that typically retain antioxidants and other nutrients, results in wine that’s actually good for you. “If it’s industrial and full with chemical additions then there is no point talking about superpowers, but most of our traditional wines are really very healthy,” says Maisuradze, adding that this healthy quality is by virtue of the vitamins and minerals in the wine, as well as the lack of artificial yeasts and sulfites. 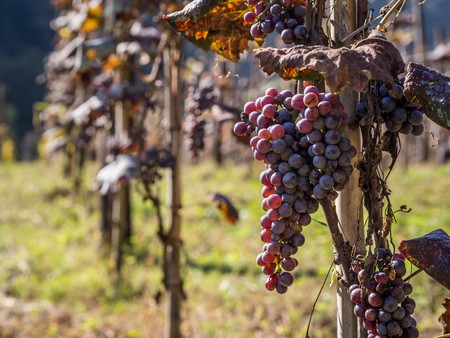 Both traditionally Georgian winemaking methods and European techniques are used in Georgia, though it’s typically the larger-scale industrial wineries that go with European-style production. “The European winemaking style is more popular in big, industrial wineries [with] huge tanks and barrels,” Maisuradze explains. Smaller operations – families often still make their own wine here – tend to go with the traditional Georgian qvevri style of wine-making, he says, which isn’t exactly scaleable: “For mass production, qvevri is useless, because it takes a lot of attention, risk, hard work, and to do millions of bottles it is impossible.” 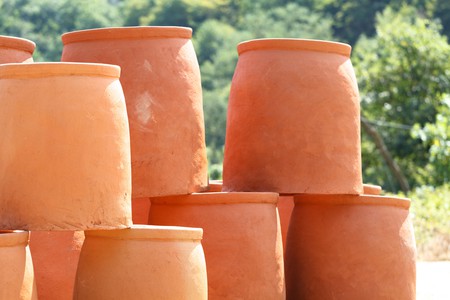 If you’re going to try one bottle of Georgian wine while you’re there, make it qvevri wine. “I think what makes Georgian wine unique is qvevri,” Maisuradze says, explaining that the large clay vessels, used for the fermentation and storage of wine, have been essential to winemaking since ancient times. It’s a way to make natural wines – currently a trending sector of the wine world – without any technical equipment, he says. Temperature control, for example, is solved by just burying the near egg-shaped earthenware vessels deep in the ground, often in a basement. But, he adds, using qvevri isn’t just part of winemaking, it’s a symbol of Georgia’s larger heritage. “It’s also the past, history and culture for us,” Maisuradze reflects.

While winemakers can (and do) make some red and white wines this way, Georgia’s famous amber wine (also known as “orange wine”, largely outside of the country) are notably made using qvevri: white grapes are fermented on their skins and seeds, resulting in tones that range from a blush peach to a deep golden orange, like the colour of a setting sun. It’s a rustic, earthy taste that’s a revelation about what else wine can be for those used to drinking wine that does its fermenting in shining stainless steel tanks or oak barrels. 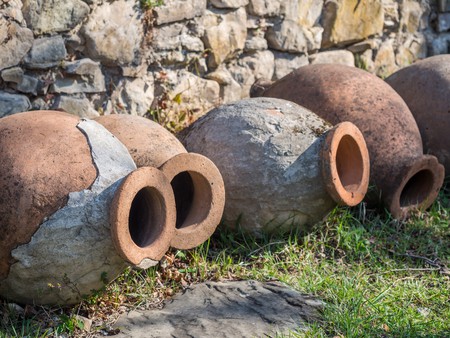 Most of Georgia’s wine – 70% of it, in fact – is produced in Kakheti, fast becoming a destination for tourists combining a trip to the wine country with a few days taking in the capital, which is an emerging tourism hotspot in itself. According to Maisuradze, it’s here that the first evidence of wine production was found, making it (so far) the cradle of wine production. Today, it’s home to Protected Designations of Origin (like DOCs in Italy, AOCs in France, and DOs in Spain), including Tibaani, Manavi, Kvareli, Tsinandali, Kindzmarauli, Akhasheni, Kardenakhi, Mukuzani, Napareuli, and Teliani.

“All these micro-zones are very different from each other – in terms of grape varieties, taste, soil and style of winemaking,” Maisuradze explains. “That’s why Kakheti produces the biggest number of wines, and that’s why wines are so changeable from one area to another. The warm climate and rich soil gives you a lot of options to do wine with the taste you like the most.” 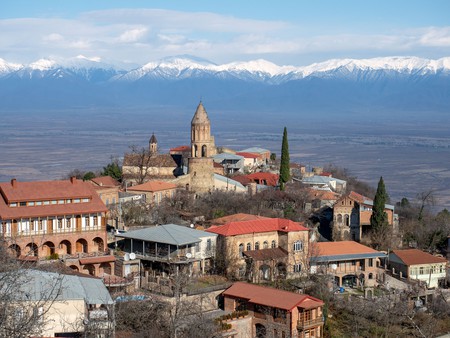 However, Kakheti isn’t the only region that produces great wine: “For sure, Kakheti will be the first recommendation from everyone, but there are other wonderful wine places to see,” says Maisuradze. Two of the ones he finds most interesting are in Georgia’s western regions: Imereti, where qvevri are more commonly called churi, and Racha, where vineyards line the banks of the Rioni River valley. In Imereti, he says, “Wines are more acidic and more refreshing. You will find lots of small wineries doing natural wines with very limited production.”

“Racha is the highest wine region with lots of local grape varieties,” he comments. If you want a base while you’re there, Ambrolauri makes a good one. “There, you’ll be able to try the most famous wines from the area: Rachuli Tetra, Dzelshavi and Kudurauli. Don’t leave without trying Khvanchkara, which Maizuradze calls “the most famous wine there” – a rich semi-sweet red that goes wonderfully with a platter of juicy fruits.

No matter which ones you try, a trip to Georgia isn’t complete without sampling at least a few of its wines. “More and more people, wine lovers, are coming here to see a new country and experience new wines,” says Maisuradze. “I think in a couple of years Georgian wines will be one of the most famous among wine-lovers.” 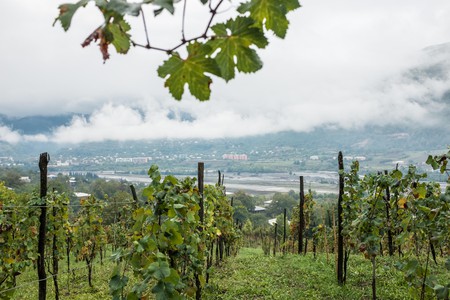