A Solo Traveller’s Guide to Georgia 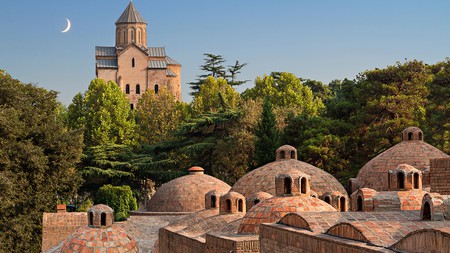 The Republic of Georgia – what a traveller’s find. Birthplace of legends, including Jason and the Argonauts’ Golden Fleece, it’s an ancient land nudging the eastern shores of the Black Sea and bordering Azerbaijan, full of swooping desolate landscapes and lonely holy refuges marked by conical spires. Come for sensational, calorific food, unforgettable horizons and the sense of having gone where no tourist has gone before. 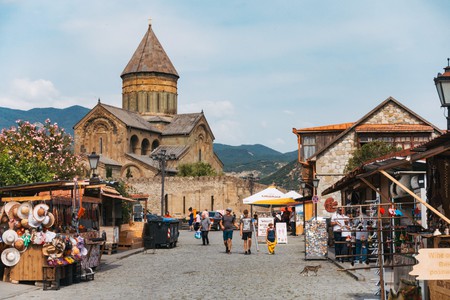 Remote, romantic and welcoming – you’ll drift around blissfully, possibly thanks to a couple of glasses of the ever-available national wine. English is spoken in hotels, city bars and restaurants, and you’ll find people generous with their time and help, whether you need directions or translations.

Aim for a week – ideally two. Size-wise, Georgia is comparable to Ireland, and it’s diverse: a land of lakes, national parks, and vineyards; of massive mountain ranges, monasteries and Black Sea shores. Whatever you plan, you’ll fly into the capital, Tbilisi, which merits at least two days. From here you might make the 90-minute trip to Kakheti for a day or more wine-tasting in the estates. Or head west (375km/230mi) to coastal Batumi. Of the many remarkable monasteries is early-Medieval Jvari, in former capital Mtskheta, near Tbilisi. And for real remoteness, factor in time in Stepantsminda town, for hiking in the northern Caucasus. 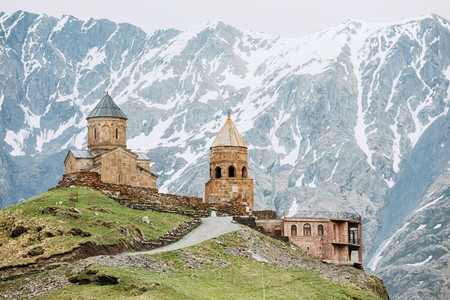 Where to stay in Georgia as a solo traveller

Luxury, local, boutique, budget… it’s all here. Are you a lover of hip hotels? Tbilisi has plenty of them. Look no further than Rooms Tbilisi, with its industrial-chic good looks and Bar Room doing hand-crafted cocktails. Prefer a competitively priced chain property? You’re quids in – from the Hilton, Sheraton and Radisson Blu properties in Batumi, the palm-lined Black Sea town, to the Crowne Plaza in the spa town of Borjomi, home of the naturally fizzy water. Elsewhere there are remote mountain lodges and eco-camping sites, family-run guesthouses and huts with hammocks. To find your ideal base read our expert lists, among them places to stay in Georgia, places with unforgettable views, spa resorts and hotels in Batumi.

What to do in Georgia as a solo traveller

Whether you’re a sucker for city buzz or a romantic in search of rugged terrain, you’ll love this nation. But it’d be remiss of us not to steer you towards these three must-dos.

How this wonderful capital city has remained under the traveller’s radar for so long escapes us. It’s a place of broad, elegant avenues and walks beside the sweeping Kura River. You’ll find bar-hopping action and modern architecture (see the space-age House of Justice and the giant foil-silver tubes that are the Music Hall). But for sheer atmosphere, the cobbled old town – Dzveli Tbilisi – is essential wandering. Balconied houses overhang the snaking streets, and the sulphurous-smelling Abanotubani (bath district) is superbly photogenic, with the Islamic-mosaic façade of Chreli Abano (Orbeliani) bathhouse.

A region in the mountainous north of the republic, this is a wildly romantic getaway, crowned with snow-white summits plunging to vast pastures and bubbling meltwater streams. Taking the old Russian Military Highway, you arrive ultimately in the town of Stepantsminda with its panoramic views of peaks. From the terrace of hotel Rooms Kazbegi, you can see lonely Gergeti Monastery, perched like a tiny mantlepiece ornament on an outcrop 2,200m (7,220ft) above sea level. Amazingly, it’s hike-able in a matter of hours, and looking back down to town when you reach it is breathtaking.

Take a hike to Gergeti as part of TRIPS by Culture Trip’s Georgia adventure. 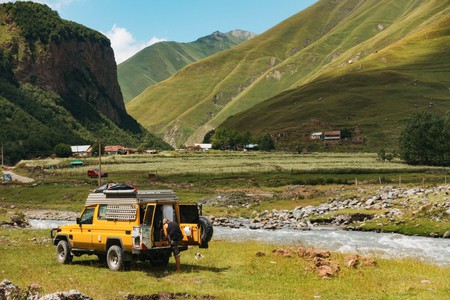 This east Georgian town has history – as the birthplace of Joseph Stalin (1878-1953), secretary-general of the Communist Party of the Soviet Union. It’s an unassuming, rather quiet place of red roofs and pencil-spired Orthodox churches. The main focus for travellers is the Stalin Museum, featuring his boots, his desk and all manner of busts (but little in the way of English signage). His simple childhood home – a wooden bungalow-style affair – has been rebuilt in the grounds, and you can clamber aboard his bulletproof personal train carriage to see his rudimentary bathroom.

Eating and drinking in Georgia

First, the drinking – if you’re a wine-lover who shops at supermarkets, you’ll doubtless have seen Georgian labels on the shelves. In fact, Georgia has a vast range of grapes, and the oldest tradition of viniculture on the planet – traces of production have been detected on pottery shards 8,000 years old. Major vineyard regions include the standout Kakheti, which turns out the highest volume. Come to learn about the traditional use of qvevri: clay vessels buried in the ground to slow-ferment the fruit, resulting in unique aromatic wines.

And the food? Don’t eat for a week before coming to Georgia – eating is a ritual, as typified by the multi-course supra, a traditional multi-course feast that may be formal or informal. In smaller places you may well find yourself invited along to any happening. In Tbilisi are wonderfully atmospheric old dining establishments, doing traditional meats and soups, served on fine china and gaily patterned tablecloths. On a more casual note, the great snacky standouts of Georgian cuisine are juicy khinkali, brothy dumplings stuffed with pork, beef or mushrooms; and khachapuri, canoe-shaped pizza-like treats, baked with gooey cheese and egg.

Hungry for more? Feast on Culture Trip’s list of Georgian must-eats. And quench your thirst with our list of local drinks. 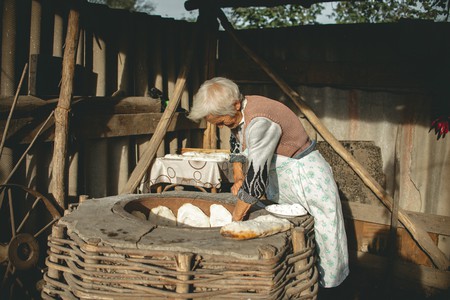 The British government recommends avoiding all travel in the breakaway regions of South Ossetia and Abkhazia. Also avoid all but essential travel to “areas immediately adjacent to the administrative boundary lines with Abkhazia and South Ossetia”.

Take the usual precautions in tourist-thronged places to avoid being pickpocketed, and have your wits about you late at night. In general, though, Georgia is a welcoming, safe country to visit.

Getting around Georgia solo

In cities and towns, as you’d expect, are taxis, buses and minibuses. Beyond, it’s less simple. Roads shrivel suddenly to tortuous winding ways leading to hidden mountain and forest churches, and mountain passes get blocked by snow in winter, making self-drive a less-than-ideal option. Train buff? Explore the rail-travel options. Best of all, join an organised tour, such as TRIPS by Culture Trip’s nine-day Georgian adventure – that way you can drink and be driven. 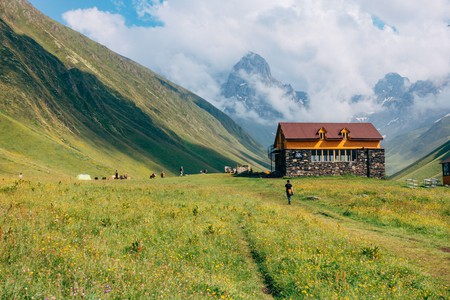 Enjoy remote living with a stay in the Chaukhi mountains

Hospitality radiates from the people you meet and places you visit throughout the nation, from the hip bars of the capital, Tbilisi, to the remotest monasteries hidden in wilderness landscapes. Just be sure, if you’re invited to one of the legendary supra feasts, not to put your elbows on the table. For obvious reasons of historic occupation, do not discuss Russia. And dress respectively when visiting churches and monasteries.

Want to explore Georgia as part of a small group of like-minded travellers? Sign up for TRIPS by Culture Trip’s nine-day itinerary Riches and Ruins: Wine, Dine and Step Back in Time in Rural Georgia. Highlights include a wander in the bewitching old town of Tbilisi, a bacchanalian session of Georgian wine-tasting, and a trek in the Caucasus mountains.