A Perfect Walking Tour of Tbilisi

Tbilisi's clock tower | © Culture Trip / Baia Dzagnidze
Georgia’s capital Tbilisi is ideal those who like to explore on foot – its must-see attractions are largely grouped together, featuring some fascinating architecture that perfectly brings together modern and old styles. If you enjoy a good wander, take a look at our perfect walking tour of the city.

Start the tour from Rustaveli Avenue

Rustaveli Avenue is the central street of the city, featuring many important buildings along the way. Start from Rustaveli Metro station and admire the statue of Shota Rustaveli, a medieval poet who wrote The Knight in the Panter’s Skin. Continue down towards Freedom Square – along the way, look for Tbilisi State Opera and Ballet Theater, Rustaveli Theater, the Parliament building, National Gallery and several museums. 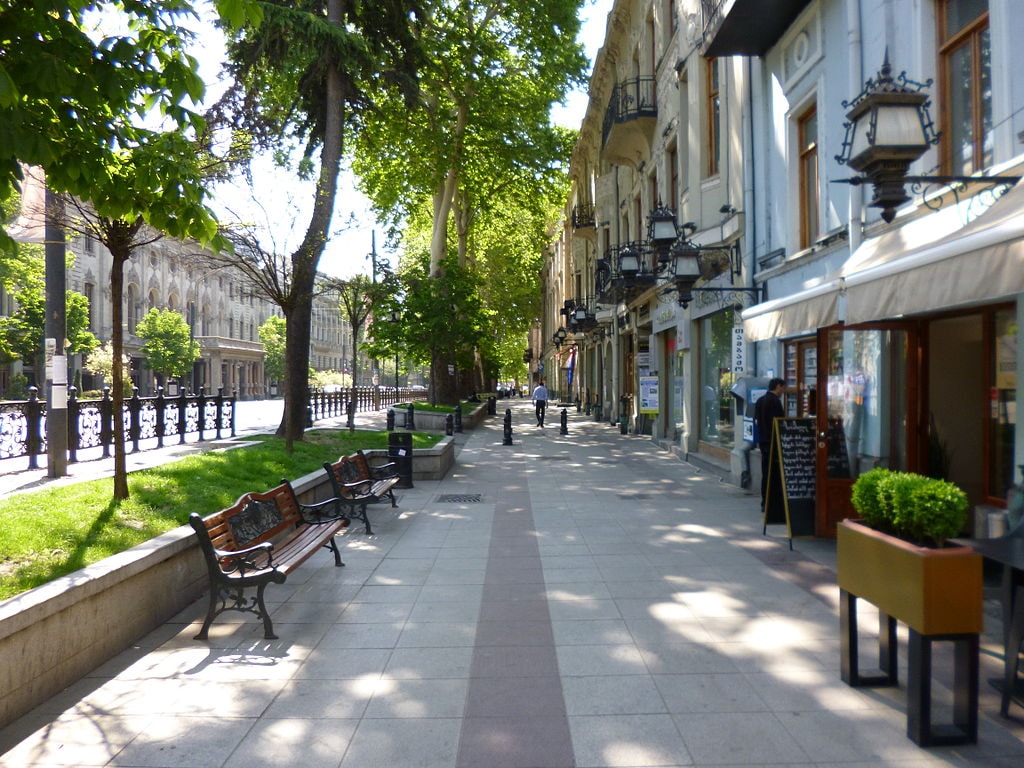 Freedom Square has always been the epicenter of the city which underwent many restorations and name changes. It was called Erivan Square when Georgia was under the rule of the Russian Empire and later, after the Soviet takeover, it was renamed Lenin Square.

Today, its central piece is the Freedom Monument dedicated to the independence of Georgian nation. Made out of granite and gold, the monument is 35 meters (115 feet) high with a 5.6 meter (18 feet)-high statue of St. George, the patron of the nation. 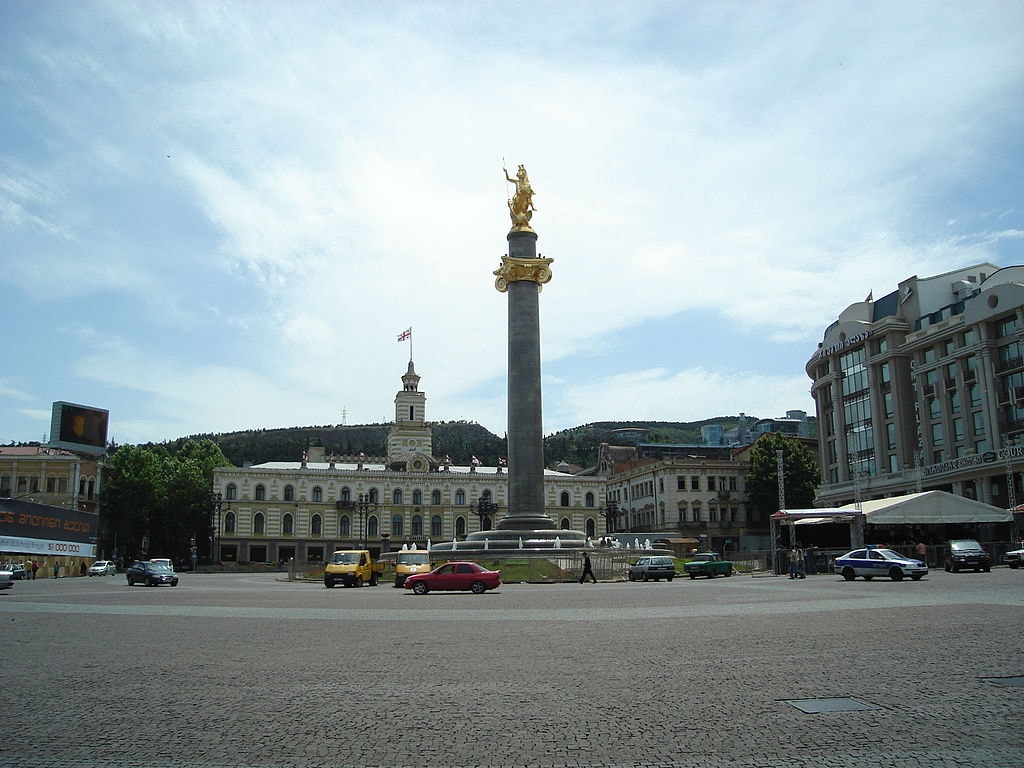 Visit the mansion of a brandy producer

From Freedom Square, continue walking on Giorgi Leonidze and then to Ivane Machabeli Street until you come to the Writer’s House of Georgia. This used to be the mansion of David Sarajishvili, who started to produce brandy according to French techniques he learned in France. Built in 1905, the building features some of the rare furniture, paintings, and memorabilia of that time. Among the most significant items are the custom-made Villeroy & Boch tiles on the terrace. 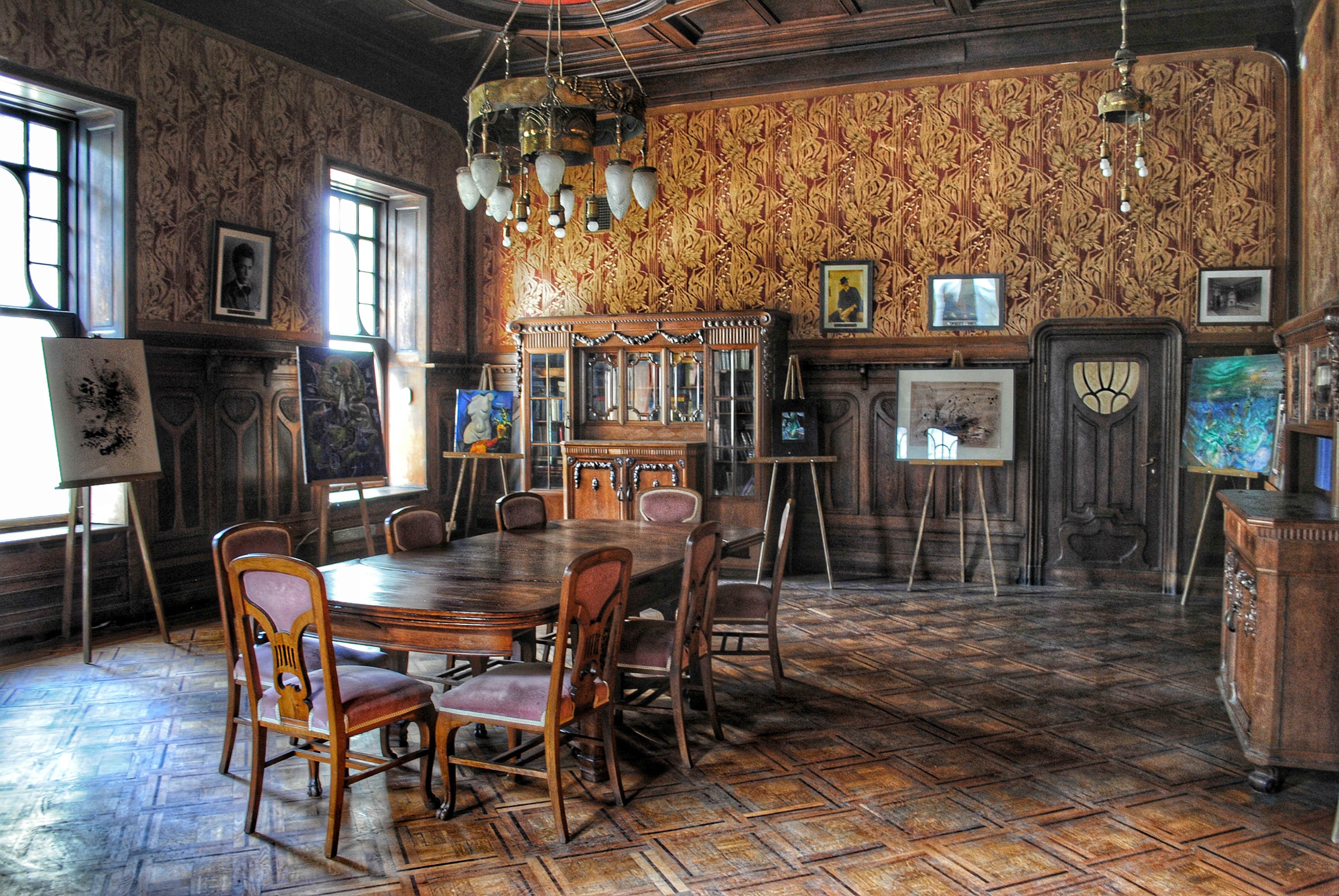 Check out the Hogwarts school

Continue your way to Lado Asatiani Street until you reach Public School N6. Often referred to as ‘Hogwarts‘ or ‘the Harry Potter school’ by many locals due to its appearance, this neo-Gothic-style building was a German boarding school for girls. 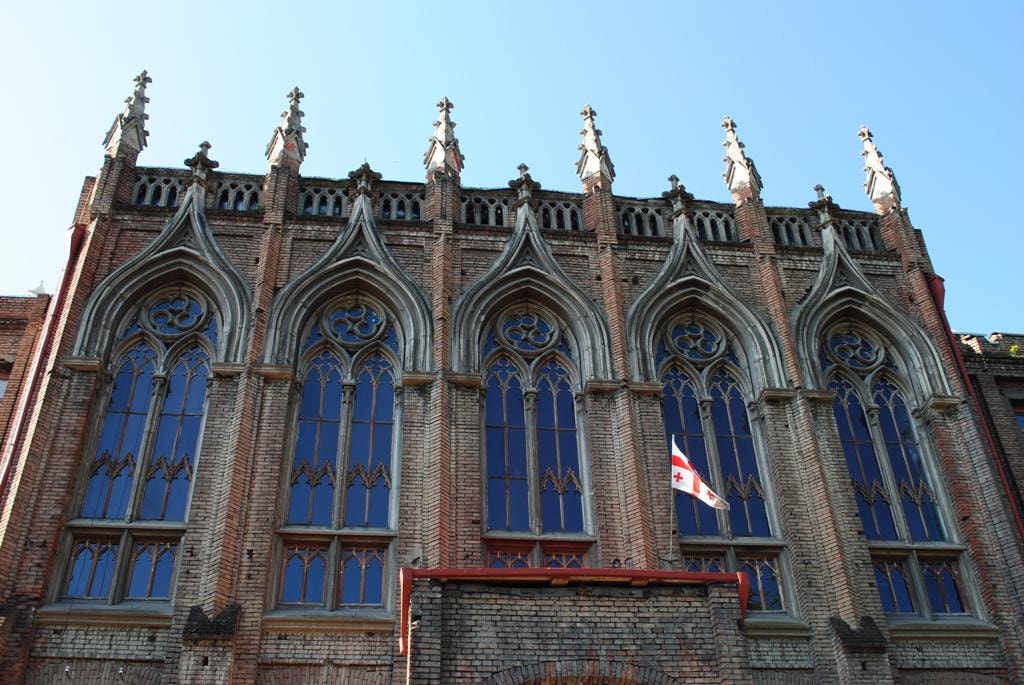 Wander through one of the oldest districts

From here, walk down to almost the end of the street, and once you reach Puris Moedani (‘the Bread Square’), turn right down Betlemi Street. This cobblestone district is full of old, wooden-curved colorful balconies and typical courtyards. Walk up to Gomi Street to find the ancient pagan fire warship icon that still stands in Tbilisi.

When you reach the end of Betlemi Street, you’ll see the steep incline towards Narikala Fortress. Dating back to the 4th century, when Persians ruled over Tbilisi, the fortress overlooks the old town of the city. You can walk on the walls, but be careful as there are no fences in place.

Walk towards the Kartlis Deda statue, (‘Mother of Georgia’) that overlooks the city. The statue represents the character and hospitality of Georgians – with the cup she meets the friends of Georgia, but is ready to fight against those who come as enemies. 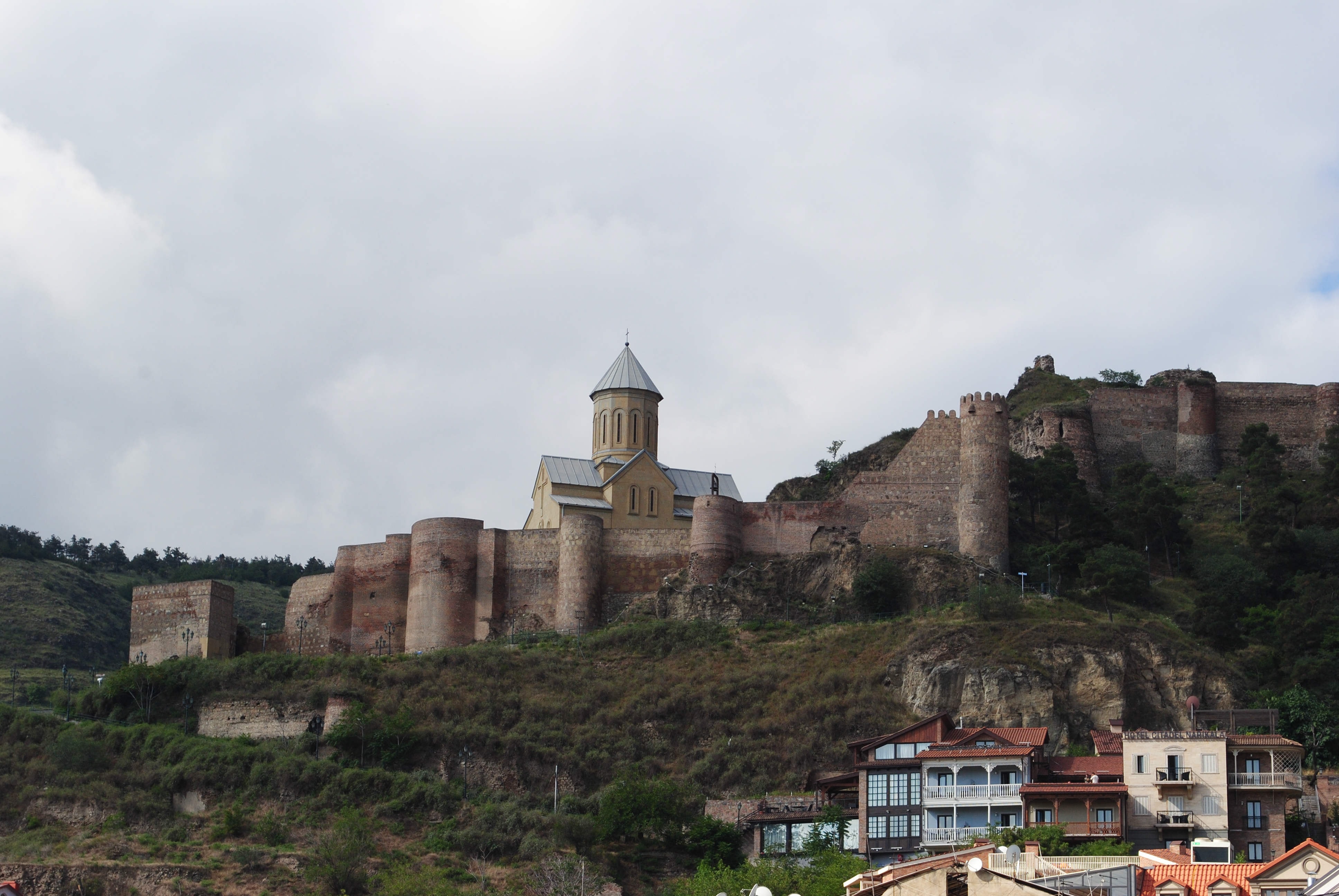 Walk in the Botanical Gardens

From Narikala Fortress, there are stairs leading to the Botanical Gardens. Occupying 161 hectares, the gardens feature a great collection of beautiful flora. 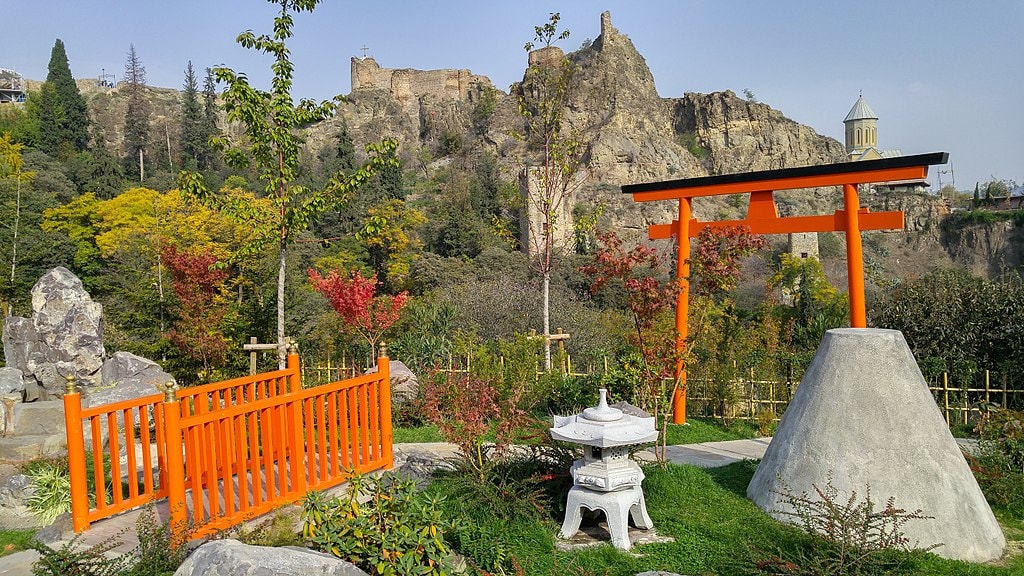 Head down to the sulfur baths

Take either Botanikuri or Miza Shafi streets to come down to Abanotubani, the sulfur bath district of the old town. If you have an extra hour to spend, head inside one of the sulfur baths for the ultimate in relaxation. Otherwise, you can also sit in the park and admire the scenery, or walk towards the Legvtakhevi valley to a small waterfall that comes from the Botanical Gardens. 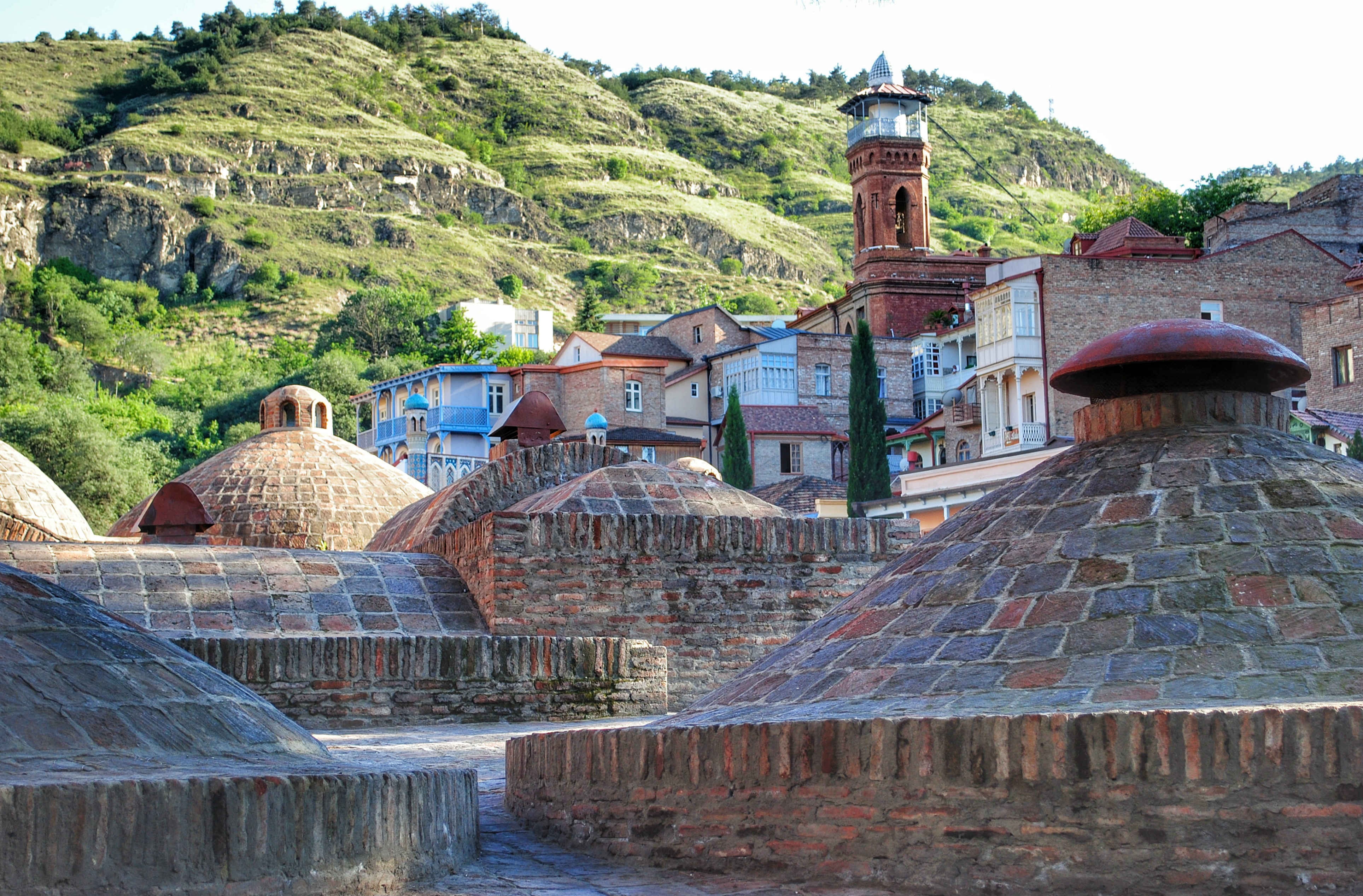 Cross Metekhi Bridge and walk up to the church and the statue of Vakhtang Gorgasali, the founder of Tbilisi – he built his palace and the church here in the 5th century. However, none of it remained and the current church was built in the 13th century. From here, take in a beautiful view of Old Tbilisi, the Mtkvari river, and Narikala Fortress.

Building
Clock Tower, Shavteli, Tbilisi | © Oleg Upalyuk / Alamy Stock Photo
Cross the Peace Bridge towards Erekle II Street and walk towards Ioane Shavteli Street – stop off at one of the cafes along the way if you feel like having a refreshing drink. Check out Anchiskhati Basilica, the oldest surviving church of the city, and finish up at the clock tower, handmade by Rezo Gabriadze, a local sculptor, writer, and playwright. If you happen to be here at noon or 7 p.m you can also see a small puppet show presenting the circle of life. Otherwise, each hour a small angel comes out and rings a bell with a hammer.
More Info
Open In Google Maps
13 Ioane Shavteli Street, Tbilisi, Georgia
View menu
Visit website
Visit Facebook page
Send an Email
Give us feedback

Back to Freedom Square

Follow the street to the end and turn left on Nikoloz Baratashvili Street upwards to Freedom Square. Along the way, you’ll be able to see Konka, the predecessor of a tram and remains of the old wall of the city.