A Food-Lover's Guide to Georgia 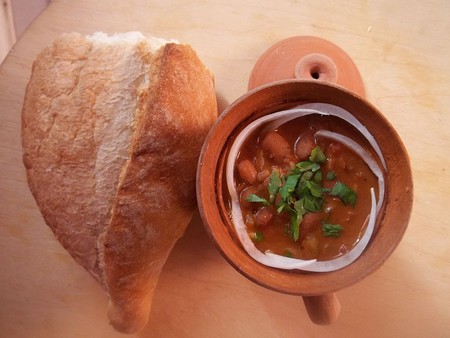 Georgian cuisine is quite diverse, with every region having a specific specialty. Eastern Georgian cuisine is full of meat, bread, animal fat and wine, while the western part is distinguished by nuts, peppers, and dairy products. Here’s a food-lover’s guide to Georgia.

The Adjarian cuisine is the most diverse; highly influenced by Turkish food. Similar to its neighboring country, you can find Baklava in Adjara. The mountainous part of the region uses dairy products in cooking, making their meals greasy and heavy.

The most popular Adjarian meals are as follows: Borano (chopped cheese fried in boiled butter), Chirbuli (breakfast meal prepared with eggs and nuts), Khavitsi (a dish made from coarsely ground corn flour and boiled butter), Kaymak and Sinori (a meal made from ricotta-like diary product and dried dough plates). However, none of them are more popular than Adjarian khachapuri, a boat-shaped cheese pie.

Kakheti is famous for its viticulture, wine, and beautiful vineyards. Mtsvadi, a Georgian version of Shashlik, originated here. Other traditional meals include Khashlama (meat boiled with onion, parsley, celery, bay leaf and red pepper), Chakapuli (mutton or beef meat prepared with tarragon, green plums, dry white wine, and coriander), and Churchkhela (a candle-shaped dessert made from grape juice and nuts).

Famous meals of Tushetian cuisine include Khinkali (meat dumplings), Gordila (boiled dough), Kaurma (a stew made from pork meat, especially liver, heart, lungs, and kidney), Kotori (Tushetian version of Khachapuri made from cottage cheese instead of ordinary cheese). Additionally, the pride of Tushetian cuisine is a goat cheese called Guda. In Pshav-Khevsureti Khinkali can be made from meat, cottage cheese, and potatoes.

The main meals of Imeretian cuisine are cheese and Khachapuri. Locals bake Kachapuri on clay pans, while the majority of cuisine is dominated by plant-based meals Georgians call Phkali. They season those plants with nuts and vinegar, while they put the meat in garlic sauce.

One of the most popular meals from this region is Kuchmachi, a dish made from chicken liver and hearts seasoned with nuts and pomegranate seeds. Additionally, the area is rich in a variety of mushrooms, therefore, the cuisine has several different mushroom dishes as well.

Svanetian cuisine often uses Sulguni cheese, a local version of mozzarella. Svans use this cheese in many dishes, including Chvishtari (a corn mill bread) and Tashmijabi (cheese infused potato puree). Kubdari is another very favorite meal for many locals. It’s basically is a meat pie. However, the pride of the area is Svanetian salt, a regular salt seasoned with pepper and different spices, giving each meal a completely different taste.

Megrelian cuisine, similar to Svanetian, uses big portions of Sulguni cheese in their cuisine. Some of the area’s staples are Ghomi (a porridge made from corn mill), Elarji (Ghomi but with cheese inside), and Gebzhalia (sulguni cheese rolls seasoned with mint). Megrelian cuisine is known for being very spicy, so if you don’t like hot meals, ask them not to put in any peppers.

Just like Imereti, this region’s cuisine is chicken meat and partially plant-based. It also uses a lot of corn mill and is known for Mchadi, a corn mill bread (unlike Svanetian Chvishtari, it doesn’t have cheese inside). Gurians also use clay pans to prepare food and, in order not to burn their meals, they line the pans with vine or walnut tree leaves, giving those meals a special taste and aroma. The most famous of their meals is the so-called Christmas pie filled with cheese and boiled eggs.

#gerogianfood #mchadi Mchadi is a very popular cornbread traditionally eaten with lobio (beans) and cheese. Ingredients (for 6 servings). 400 grams of stone-ground cornmeal (preferably white), 1/4 teaspoon of salt, 1 cup of cold water (may need more depending on the cornmeal). Stone-ground white cornmeal  Preparation. Add water to the cornmeal little by little so that the cornmeal becomes firm but not wet. When the dough is ready, take a piece and make a small ball. Shape the ball in the palm of your hand until it looks like the one in the picture above. Heat the oil in a pan (medium heat) and add the dough. Smooth each piece with the back of a wet spoon. Cover and cook for 5-6 minutes. Turn the dough over and cook uncovered for a further 5-6 minutes. The Mchadi are golden brown when ready. Mchadi is traditionally eaten with lobio (beans) and cheese. Enjoy!