A Brief History of Georgia's Only Female King 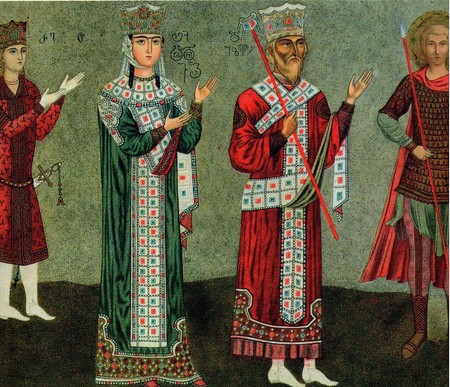 Queen Tamar, also known as Tamar the Great, ruled Georgia from 1184 to 1213, leading to the summit of the Georgian Golden Age. She was the first woman to govern Georgia in her own right. Here we look at a brief history of her rule, accomplishments and diplomacy.

Road to the throne

A member of the Bagrationi Dynasty and the daughter of George III, King of Georgia, Tamar was born in 1160. In 1177, her father faced a group of rebellious local nobles, who planned to dethrone him in favour of his nephew Demna, whom many considered to be a legitimate royal successor of his assassinated father, David V. 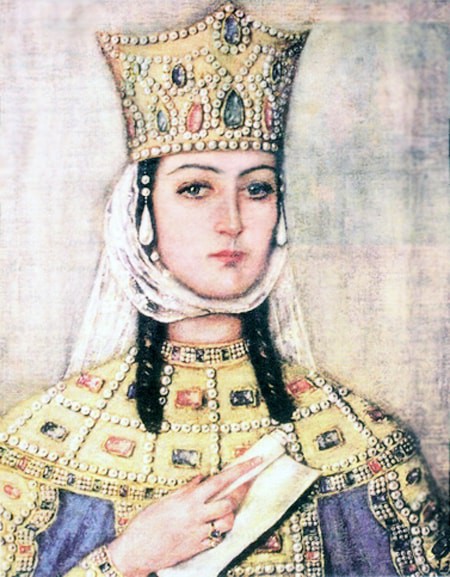 George III defeated the uprising and imprisoned or put to death the rebels. Once the revolt was suppressed and eliminated, he started to include Tamar in government and crowned her as a co-ruler in 1178, when she was 18 years old. This was intended to stop any controversy after his death and legitimise his family on the throne.

Tamar and her father co-ruled for six years and, when George died in 1184, she became sole ruler; crowned for the second time in Gelati Cathedral in Kutaisi.

However, her reign wasn’t met with full support. As the country had never had a female ruler before, the nobles questioned her legitimacy and tried to use her age against her. The young queen was pushed into making important concessions to the nobility, including the removal of King George’s appointees. Thus, the aristocracy came into the centre of power again.

The nobles ordered Tamar to marry to have a head for the army and to provide a successor to the throne. They chose Rus Prince Yuri, son of the assassinated prince Andrei I Bogolyubsky of Vladimir-Suzdal, who lived as a fugitive in the North Caucasus.

Approved by Tamar’s aunt Rusudan, Yuri was brought to Georgia to marry Tamar in 1185. The prince was a skilled soldier, but an unreasonable person and not a good husband. Slowly Tamar started to gain confidence in her rights as a queen. The death of the persuasive Catholicos-Patriarch Michael, who was not a big supporter of Tamar, played a big role in her future governance. Tamar appointed her advocate Anton Gnolistavisdze as chancellor and gradually increased her power base in the courts.

In 1187, Tamar divorced Yuri and sent him to Constantinople. She then chose a second husband – David Soslan, an Alan prince and a great military commander, who became Tamar’s primary advocate and was effective in crushing the rebellious aristocracy united behind Yuri.

King Tamar and David had two children; Lasha-Giorgi, the future King George IV; and Rusudan, who later replaced her brother as a monarch of Georgia.

Why Tamar was called King

Once King Tamar strengthened her power and gained a reliable support, she restored the expansionist foreign course of her ancestors.

One of the most remarkable events of King Tamar’s governance was the establishment of the Black Sea coast’s Empire of Trebizond in 1204. By the end years of her governance, Georgia had attained the peak of its power and fame in the Middle Ages.

Tamar’s kingdom extended from the Greater Caucasus to Erzurum, and from the Zygii to the proximity of Ganja building a pan-Caucasian empire. The royal title increased and reflected, not only her power over the subdivisions of the Georgian Kingdom, but highlighted the Georgian crown’s authority over the neighbouring lands. 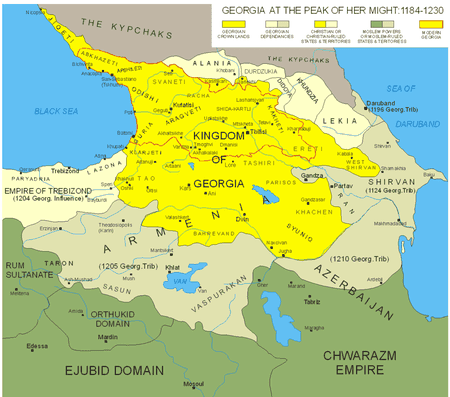 The Kingdom of Georgia during the reign of King Tamar | © User:Andrew Andersen / WikiCommons

Tamar never gained dictatorial leadership and the noble council maintained their function. However, her own influence and the development of feudalism kept the more strong dynastic princes from fragmenting the state.

Besides expanding Georgian territories, her governance brought a golden age in culture. Locals continued to identify themselves with the Byzantine West, rather than Islamic East. This period brought architectural development to the country when a great number of impressive domed cathedrals were built.

Tamar was identified among Georgia’s ‘King of the Kings’, as the language has no grammatical genders, unlike the word king in English, it does not imply a male ruler.

The fame of Tamar continues today

Popular computer game Civilization VI: Rise and Fall included Georgia as one of the world’s ancient nations led by King Tamar. The game gives facts about her, introducing her as a smart, diplomatic woman who supported the arts and who was a brilliant defender of her kingdom.

Tamar speaks in Georgian throughout the game, which also features traditional music and details of Georgian architecture and medieval costumes.