8 Famous Musicians You Had No Idea Were Georgian 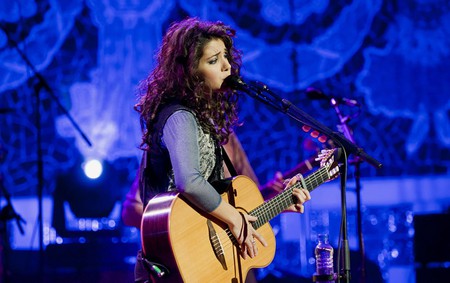 Georgians love to sing on almost any occasion – they have a rich musical culture that has been around for many centuries. Thus, it’s the home country of many famous musicians recognized around the world. You might have heard about some of them, or perhaps none at all; here’s the list of those famous musicians you didn’t know were Georgian.

Katie Melua is a Georgian-British singer and songwriter, who moved to the United Kingdom at the age of eight. In 2003 she made her musical debut by releasing her first album, Call Off the Search, and three years later, in 2006, she gained fame in the UK by being the country’s best-selling female artist and Europe’s highest selling female musician.

Since her debut at the young age of 19, she has sold more than 11 million albums and 1 million concert tickets across the globe. Even though her music isinfluenced by Bob Dylan, Queen, Eva Cassidy, and Joni Mitchell, she manages to write modern and trendy songs that capture the world.

Khatia Buniatashvili is a prominent Georgian pianist known not only because of her excellent technique, great virtuosity, and overwhelming emotion in her performance, but also for her femininity and beauty.

She began playing the piano at the age of three and had her first concert with the Chamber Orchestra in Tbilisi when she was only six years old. And since the age of ten, she has hosted shows in Ukraine, Armenia, Europe, and the USA.

Her U.S debut in 2008 at Carnegie Hall earned her great success and performances at various concerts, festivals, as well as projects with famous artists like Plácido Domingo, Mikhail Pletnev, Kent Nagano, and Neeme Järvi, just to name a few. She has been involved in various projects, like the 70th anniversary of the United Nations – a charity concert for Syrian refugees, “To Russia with Love” – a concert against the violation of human rights in Russia, and the United Nations Climate Change Conference – Marrakech Climate Show, participating in the DLDWomen conference, among others. In 2015, she collaborated with Coldplay for their latest album A Head Full of Dreams. Currently, she is the ambassador of the nonprofit organization Foundation Cœur et Recherche and of the humanitarian organization Plan International.

Beka Gochiashvili is another young pianist who has conquered the stage both in Georgia and the USA. This 21-year-old jazz pianist and master of improvisation has been living and studying in New York City for several years now. He started to play the piano at the age of three, and at the age of ten he had already performed for audiences at various jazz clubs in Tbilisi. A student of the US Juilliard Academy with Frank Kimbrough. He has already earned numerous international awards including the Classical Music Festival 2004, the 2007 Saulkrasti Jazz Festival, and the 2008 Montreux Jazz Festival.

Lisa Batiashvili is a Georgian violinist who has been living in France and Germany since she was 12 years old and has performed across the United States and Europe. Born into a family of artists, she began playing the violin at the age of four with her father. At the age of 15, in 1995, she was the winner of the International Jean Sibelius Violin Competition in Helsinki. A couple of years later, from 1999 to 2001, she became one of the first of BBC Radio 3 New Generation Artists.

After winning the prize at the Francisco Viñas International Singing Contest in Barcelona, she obtained a scholarship at Milan’s illustrious Teatro Alla Scala Academy of Lyric Opera. She had her operatic debut in Milan in 2002, as Cuniza in Verdi’s Oberto. Since then, she has performed in many opera houses around the world.

In 2010, the former president of Georgia, Mikheil Saakashvili, awarded her the Presidential Order of Excellence. In addition, she is one of the founders of a charity organization called Desire Tree, which provides help to those children who need medical care.

Nino Katamadze is a famous jazz singer and artist vastly renowned among Georgians. However, she is also very well known across Europe and the post-Soviet countries. Born in 1972 in Kobuleti, the seaside town of the Adjara region, she studied at Batumi Music Institute in the vocal department. Her first international tour in 2002 across Europe brought her fame and another trip to the US in 2005. One of her albums, White, has been immensely successful and was released not only in Georgia but also in Finland, France, Ukraine, Russia, Sweden, Germany, UK, and Italy with more than 700,000 sold copies.

Nicolas Namoradze is another young pianist already recognized and loved for his exceptional talent among classical music enthusiasts. This 24-year-old young Georgian composer gets inspiration from gravitation waves, Einstein’s theory of relativity, and black holes. He has held concerts in various prestigious venues internationally, which has gotten him featured in the Wall Street Journal and the New York Times.

A well-known guitarist, Kvitelashvili started to play the instrument at the age of 11 on his own and over the years studied different musical styles such as jazz, classical, pop, rock, and flamenco, to name a few. He was the first guitarist in the country who started to create his own arrangements and transformed not only Georgian modern and classical music for guitar, but also world-known classical compositions.

In 1994, he was nominated for Best Guitarist of the Year in Fusion at Hollywood’s International Competition of Guitarists. This bought him more fame and success and scored a performance with Michael Angelo, an American guitarist-virtuoso. Two years later, he was awarded the title of The Best Instrumentalist of Georgia.