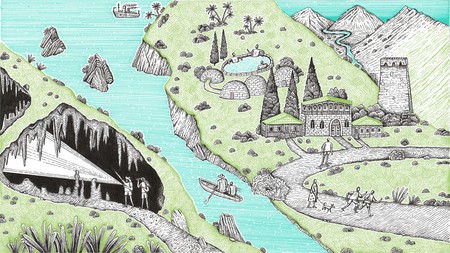 This small, beautiful country spans a continent’s worth of landscapes – you can expect ice-capped mountains, forests, lakes, ancient caverns and a turquoise, palm-fringed sea.

From summer meadows of wild lilies to snowy slopes in winter, Georgia is beautiful in every season: when the steppe blooms in spring or the woods turn gold in the autumn. As those who have seen the attention-grabbing Legvtakhevi Waterfall in the heart of Tbilisi’s old city will attest, there’s no need to trek for days through a national park to get off the beaten track and find this beauty. Simply follow a flowery path or ride a minibus out of town to swim in a spring-fed pool, watch a cascading waterfall or stroll through a subtropical paradise.

Svaneti is the sort of destination nature photographers dream of. After all, there aren’t many places where, in a single shot, you can capture vast, snowy mountains looming over multi-coloured meadows of wildflowers, flooded in a sunset glow and bisected by a rushing, pebbly stream. But Svaneti is one of them. It’s also home to the highest continuously inhabited settlements in Europe, and parts of it (Upper Svaneti) are listed among Unesco’s Cultural Heritage Sites. Increasingly accessible thanks to extended tracks and direct flights from the capital, the once remote region is becoming ever more popular with nature-loving visitors while retaining its natural magic and mystic charm. Scattered across the patchwork landscapes and in sheltered undulations, you’ll find medieval-type villages and tower-houses acting as superb man-made reference points in a region of predominantly natural beauty. The village of Chazhashi in the southern foothills of the Greater Caucasus mountains still has more than 200 of these structures, known as Svan Towers, which were used as homes and as defence posts against invaders. 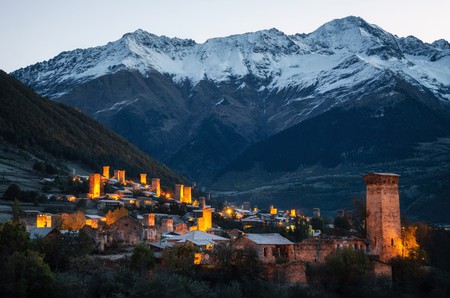 Just a couple hours’ drive southeast of Tbilisi, in a wild, haunting landscape of swirling sunset-coloured sandstone and circling birds of prey, the old caves of the David Gareja Monastery Complex are an unforgettable sight. From April to June, the steppe is a carpet of wildflowers, pink sage and waving grasses, alive with lizards, rabbits, crested skylarks, rose-coloured starlings and even eagles. Saint David founded the monastery in the sixth century and though the complex has since largely expanded, and is currently on the Unesco Tentative List, some monks still live in the red-tiled lavra. Leave them to peaceful contemplation and follow a steep mountainous path with a guide-rail to find the empty caves of the Udabno Monastery. They are painted with incredible frescoes dating back to the eighth century, and offer wide, heart-stopping views across the empty desert hills. 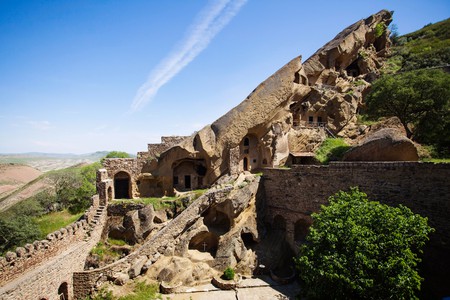 The David Gareja Cave Monastery complex in the Kakheti region of Georgia was built in the sixth century by Assyrian monk, Saint David | © jamais_vu / Getty Images

This mountainous, four-season destination in the Guria district of western Georgia is a relaxing, powdery haven of winter sports and ultra-clean air. A long-time secret escape for Georgians, which is slowly becoming a favourite among savvy visitors, Bakhmaro offers a range of hiking, horse-riding, skiing and snowboarding opportunities. Unmarked trails and mountain paths lead keen hikers through the surrounding lush forestry to other charming Guria villages such as Vakijvari and Gomismta. Wooden cottages are perched on stilts and dotted around the village, appearing and disappearing in the rolling mountain mist, giving the place an otherworldly charm. But best of all are the sunsets. Don’t leave without witnessing the sun slinking beneath the Black Sea horizon from Gadrekili (Sunset Hill). 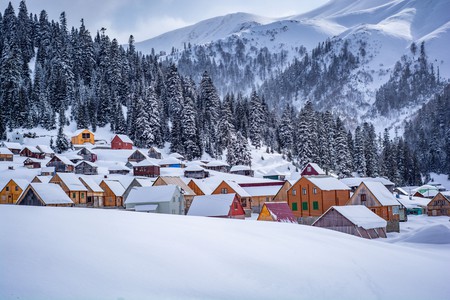 The naturally fizzy Borjomi mineral water that bubbles from springs in the heart of Georgia has filtered down from mountainous glaciers. The fresh mountain air and this water, long favoured by spa-lovers, means Borjomi gets its fair share of visitors. But walk out of the picturesque town along the leafy Borjomula Valley, past lots of pretty bridges, and you’ll soon be deep in the woods. In a clearing among pine and beech trees, you can swim in a warm sulphur pool, fed by a thermal underground spring and only reachable on foot. 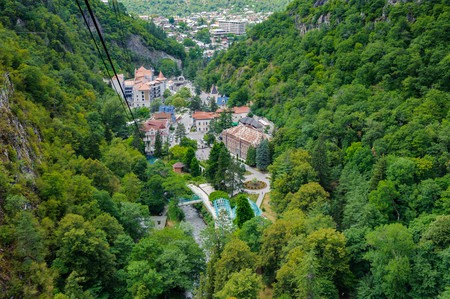 For a different kind of natural encounter, you can explore roughly 1.4km (0.9mi) of this cave system on foot or alternatively boat ride through these limestone halls, about half an hour’s drive from the Kutaisi, one of the oldest continuously inhabited cities in Europe. The legend-rich local landscapes are full of lakes and fast-flowing rivers. Discovered in the 1980s, the Prometheus Caves have been sculpted by time and water into stalagmites, stalactites and waterfalls of stone. An underground river links a cave system 10 times as long as the stretch open to visitors, giving the complex an air of mystery, helped by a classical soundtrack and an artful rainbow of neon lights. Over 70m years old, 40m (131ft) below sea level and pleasantly cool even on the hottest summer days, you can easily believe the legend that says the mythical rock where Prometheus was chained lies somewhere in these mighty caverns. 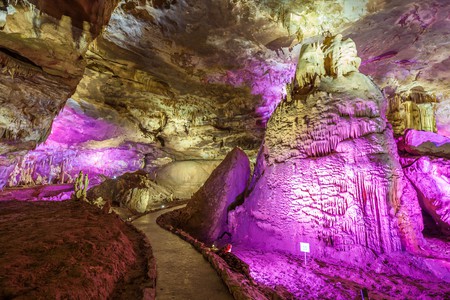 With mountains towering around it, the relatively untouristed province of Racha offers unspoilt forests, mineral springs, vineyards and misty lakes. With a mixture of gold-leafed silver birches and poplars, copper beeches, classic evergreen Christmas trees, and splashes of orange, the autumn colours here are phenomenal and, best of all, autumn also means it’s time for the grape harvest. Steeped in lore and legend, Racha is a destination for the myth-seekers, who will be welcomed by friendly locals keen to tell stories of magical forest creatures and fairies around the campfire. 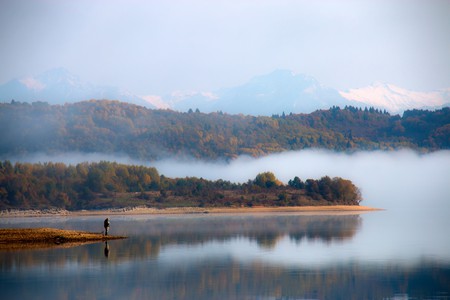 In the quieter corner of Racha, thick forests serve as the perfect backdrop to misty lakes | © cspider

The coastal region of Ajara, in the semi-tropical southwestern corner of Georgia, is where the mountains meet the sea. The blend of salty breezes and clean air from the wooded hills draw visitors in search of a healthy break. You don’t need to hike for miles out of busy Batumi to commune with nature (although you could). A 20-minute minibus ride along the coast brings you to the lush Botanical Gardens, where there are palms and sun-warmed pine trees, flaming Japanese maples and a mossy tulip tree bridge over a valley full of ferns. This 100ha (247 acres) garden also has buzzing beehives, flowers from around the world, and gorgeous views across the blue-green waters of the curving Black Sea coast. 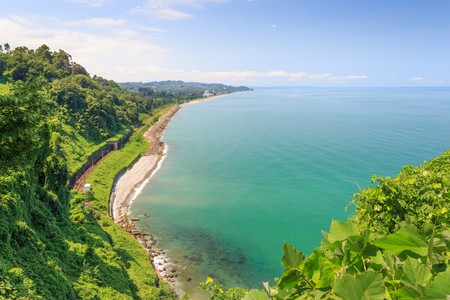