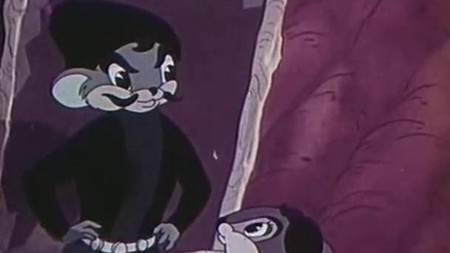 When recalling moments from childhood, every Georgian remembers the cartoons they used to binge watch after they came home from school. Being part of the Soviet Union, there were both Georgian and Russian animated series. However, in later years, kids were introduced to American and European channels and the scope of cartoons significantly increased. Thus, here’s the list of the nostalgic cartoons every kid in Georgia grew up watching.

When Mickey Mouse was getting famous in the rest of the world, Georgia had its famous cartoon character Tsrutsuna, a brave mouse who shows that nothing can stop a person when he is in love. The moral of the story is to fight for the love because, when something is worth having, it’s worth fighting for.

Mtroba, or “Feud” in English, is one of the prominent cartoons in the history of Georgian animation. It’s about a conflict among two species of birds, falcons and hawks, and scrutinizes feudalism and the relationship between master and a slave.

Masters don’t fight, but others do instead and die. Clearly, the brutality and horrific representation of the war has been toned down to make it accessible to a young audience. The cartoon perfectly shows the nature of war, power, and love.

Translated as “I will come as a rain,” it is one of the cutest but at the same time saddest cartoons, every Georgian cried their heart out at the end. This cartoon only has two characters—a girl and a talking snowball—and shows the beauty of friendship and loss and gives a great sense of hope.

While most cartoons were about talking animals, Gabriel Lavrelashvili made a cartoon about talking cars in 1973. This is a fantastic work displaying the rich imagination of its creators and is an amazing work of art.

Komble is an adaptation of a Georgian folktale about a farmer whose cow is taken away from him by servants of his landlord. The animation features excellent music, funny songs, and elegantly drawn characters. It shows that, despite the social scale, a person should stand up for their beliefs, and that nothing that can stop people from accomplishing their goals.

Sazamtro or Watermelon in English is a fantasy cartoon where a planet is represented as a large plate surrounded only by a sun and a moon. On this flat surface lives two men, a working man and a lazy person. Its moral is about light and dark, good and bad, told in an unusual way.

This is a Russian Soviet animated series called Nu Pagadi that debuted in 1969 and has become one of the most favorite cartoons in post-soviet countries, including Georgia.

The animation reflects the humorous adventures of a playful yet creative wolf who tries to catch a hare. There are other characters in the series who either help the hare or intervene with the wolf’s plans. The original language is Russian, but there is very little speech used, so those who don’t speak the language can still watch and enjoy.