5 Local Drinks to Try in Georgia 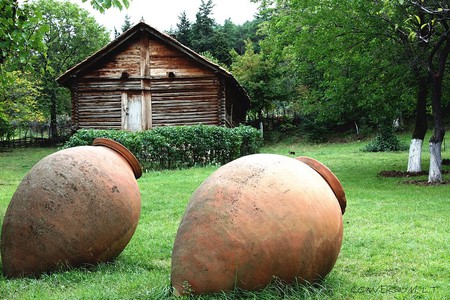 You might have heard about the staples of Georgian cuisine, but you might not know what drinks to try once you visit the country. Even though Georgian beverages are not as diverse as it’s cuisine, there are a couple of beverages unique to the state. So here’s a short list of the local drinks you shouldn’t miss when in Georgia.

Georgia is home to many natural springs, from which several companies produce naturally carbonated mineral water. Each and every beverage is different from the other with taste and carbonation strength. The most famous of all is Borjomi both in Georgia and post-Soviet countries. This particular beverage is from Borjomi Gorge springs, located in the central part of the nation. If you wish to taste the natural spring, you can visit Borjomi and drink it before it is carbonated. Note that the natural spring has a strong sulfur taste before going through the purification process.

The Borjomi Springs were discovered in the 1820s by the Imperial Russian military. This lead to its vast popularity in Russia, both as the drink and tourist destination. The history of the brand Borjomi is closely related to the Romanov Dynasty and has been bottled in Russia’s Georgian estates. However, after the Soviet takeover, the enterprise was nationalized and the product was exported to Soviet countries.

Naturally, lemonades are produced all over the world, but tarragon flavored lemonade is unique to Georgia. It is another carbonated soft drink that Georgian’s love and was very popular during the Soviet era. It has a distinctive bright green color and a taste of the tarragon leaves.

The beverage was made by Mitrofane Lagidze, a Georgian pharmacist in the nineteenth century, by mixing carbonated water with the tarragon syrup. His invention quickly became popular and he opened a syrup factory with the trademark Lagidze Water, which still survives to the this day.

Today, many soft drink manufacturers produce typical lemonades with natural flavoring. The products can be bought at any local shop across the country. If it happens that tarragon is not your cup of soda, you can try other flavors, such as vanilla, lemon, pear, grape, and chocolate to name a few.

As mentioned above, Lagidze Water is created from soda and natural syrups. Traditionally it’s mixed in a glass from the soda fountain in front of you, making the whole experience unique and authentic.

In 1887 Lagidze experimented with the idea of using natural syrups instead of imported flavored essences to make lemonades. In 1900 he and his brothers began to blend unique proprietary flavors made from fruits and herbs. In 2014, this method of making lemonade was added to UNESCO’s Intangible Cultural Heritage List of Georgia.

It’s a fact now that Georgia is one of the oldest wine making countries in the world, producing the alcoholic beverage for at least 8,000 years. What makes Georgian wine so special is the method it uses. Qvevri, a clay jar with a pointed end, is the primary vessel in traditional Georgian wine making. When grapes are crushed, the juice together with stems and skins are poured in qvevri for fermentation. The qvevri is buried underground, where a natural temperature of the soil does the “magic,” resulting in an amber-colored wine.

This local pomace brandy is clear in color and very potent. The name of the drink comes from a Georgian word chacha for grape pomace (the solid remains of wine grapes after being pressed).

Traditionally it was a home-brewed drink of Georgians. Depending on the maker, the alcohol percentage can range between 40-65%. Today it’s commonly produced by many local distilleries and is sold in stores all over the country.

Apart from grape pomace, locals make chacha out of many other fruits, such as figs, pears, tangerines, peaches, and even honey.