Dishes That Are Worth Travelling to Georgia For 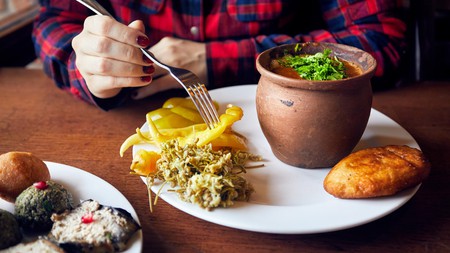 While Georgian cuisine is often heavy on meat, there are some vegetarian options, too | © Marina Pissarova / Alamy Stock Photo

Georgian cuisine is diverse, although often heavy on dough and meat. The influence of Europe and its Middle Eastern neighbours has resulted in delicious, colourful and somewhat unique dishes, and each region has its distinct culinary traditions and recipes. Wondering what you should try when you come to Georgia? Here’s our pick.

If you like to let food guide you when you travel, join Culture Trip on an exclusive nine-day adventure through Georgia. You’ll visit food markets, cook with a local in their home, taste Georgian wine and try many of the dishes below at the best places to find them – guaranteed thanks to our local insiders who will be on hand to provide cultural insight with every meal. 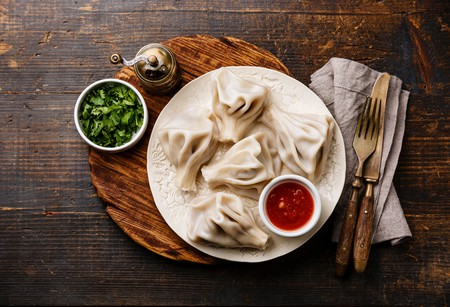 Khinkali is a type of dumpling filled with minced meat, vegetables or cheese | © The Picture Pantry / Alamy Stock Photo

This meat dumpling is a popular dish in Georgia. Khinkali is boiled in water, not steamed, allowing the minced meat inside to produce a savoury broth, making the dish juicy, soft and delicious. It originated in the mountainous regions of Georgia, but later on, it spread across the country. Even though the original recipe calls for meat, restaurants make vegetarian options, too, such as potato, mushroom or cheese. 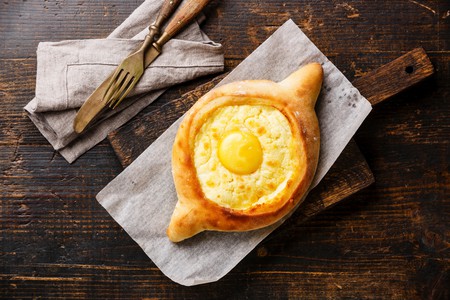 Khachapuri is another favourite meal of many Georgians. It’s a pizza-like dish made with a saltier mozzarella-like local cheese called sulguni. But unlike pizza, the cheese is not on top. Instead, it’s put inside the dough, so when you bake it, the cheese melts, creating gooey stuffed cheese bread.

There are different types of khachapuri – they vary from region to region. They all look alike but have minor differences. However, only Adjaruli khachapuri is distinguished by shape and presentation. The dough is shaped like a boat and baked in a brick oven. Once the khachapuri is out of the oven, the chef cracks a raw egg on top and adds a knob of butter. Once served, you mix everything together, break off the boat-shaped bread’s crusty ends and dip it in the cheese-egg-butter mixture. 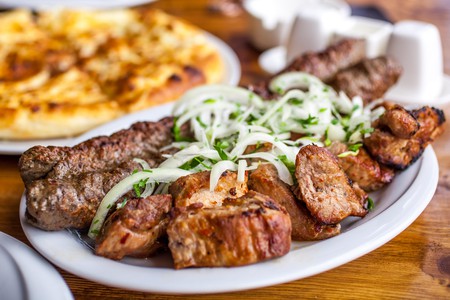 Mtsvadi, another staple of Georgian cuisine, features cubes of meat on a skewer, grilled over the coals of an open fire. Georgian restaurants offer mtsvadi made with different meats, but the most common type is pork. Usually, Georgians eat mtsvadi with a local sauce called tkemali, made with sour plums. There are two varieties of tkemali – red (sweeter) and green (sour). 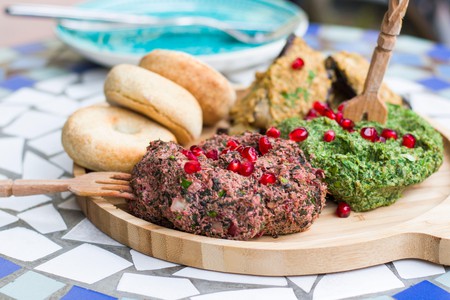 Pkhali is a general term for a meal that consists of minced vegetables in a walnut sauce. Eggplant, cabbage, spinach, beets and beans are mixed or rolled up with the sauce made with minced (or crushed in a pestle and mortar) walnuts, herbs, garlic, onions and vinegar. None of the traditional Georgian feasts or supra is complete without it. Pkhali is the number one appetizer here. 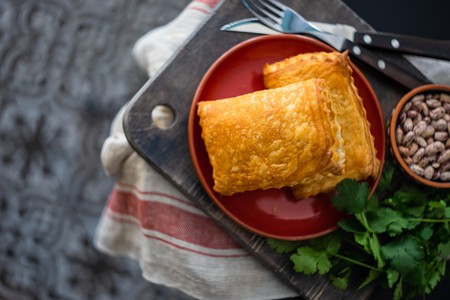 Lobiani is similar to khachapuri; the only difference is filling. While khachapuri calls for cheese, lobiani is made with mashed black kidney beans. 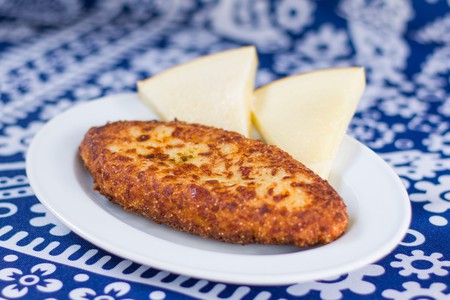 Mchadi is a traditional bread made with cornmeal and water and is eaten with cheese. In the past, when there was a shortage of wheat or a family was poor, mchadi served the same purpose as bread. It still plays an integral part in Georgian cuisine. There is another version called chvishtari, which adds grated cheese to the mixture. Not only is it cheesier, but it’s also softer. 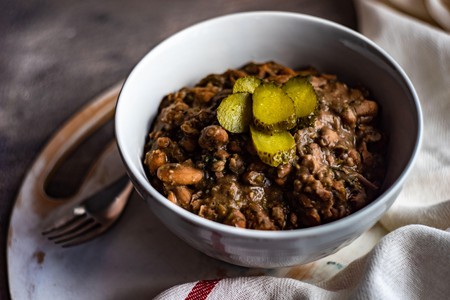 In Georgian, the word lobio means beans, and the eponymous meal is made with various beans. Just like khachapuri, there are different varieties of lobio, cold or hot. But the most famous one is a thick black bean soup, served with pickles and mchadi. 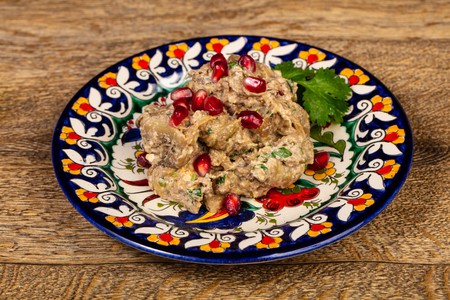 Satsivi is a walnut paste that’s used in different recipes. It’s also a generic term for a turkey or chicken meal prepared with this paste, which Georgians make for New Year’s Eve. One particular variety is bazhe, which is slightly tart and made with red wine vinegar. 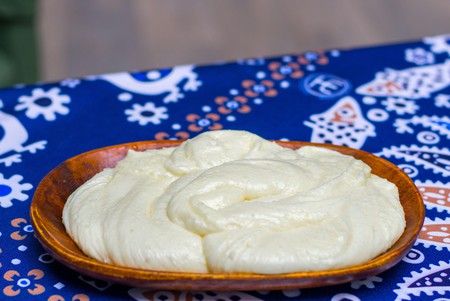 Elarji is a cheesy dish made with cornmeal, corn flour and lots of cheese | © Tamar Dundua / Alamy Stock Photo

This dish from the Samegrelo region is made with corn flour, cornmeal and sulguni. The cheese is added after the corn flour and cornmeal thicken in the pot, resulting in a stretchy and cheesy meal. You can eat elarji plain or pour some bazhe on it. Another variety is ghomi – plain cornmeal and corn flour. You add sulguni afterwards on your plate. Like elarji, you can eat ghomi as is, but most of the time, it accompanies chicken satsivi. 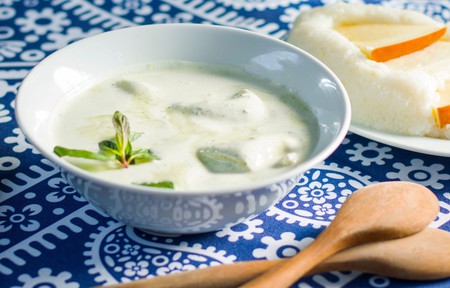 This dish is also from the Samegrelo region. Gebjalia is cheese rolls dipped in a mixture of milk, sour cream and nadughi (ricotta-like cheese). The cheese rolls are flavoured with salt, pepper and mint. 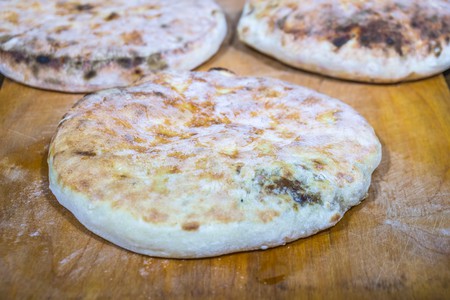 This meat pie is the national dish of the Svaneti region. The filling contains chunks of pork, lamb or goat flavoured with onions and Georgian spices.

Bread is an essential part of a Georgian meal, and traditional bread is made in a tone – a clay oven set within the ground. A fire burns at the bottom, heating the oven’s walls where the bread bakes. 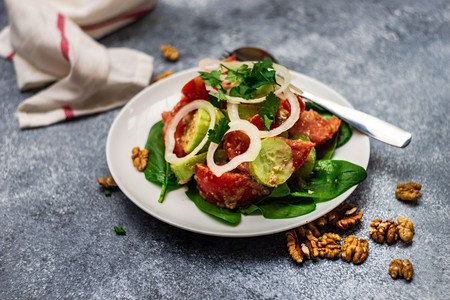 There’s a limited number of traditional salads in Georgian cuisine. A salad usually has cut up tomatoes, cucumbers and onions flavoured with salt and green chilli on the side. However, as Georgians love walnuts, they add a walnut sauce to this simple salad, making it more delicious and somewhat different. 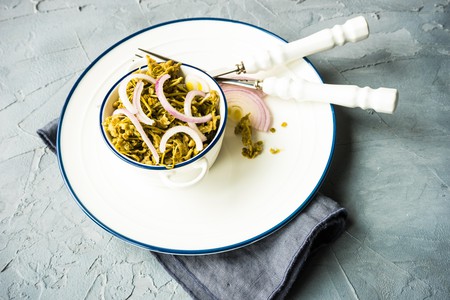 Jonjoli is pickled sprouts flavoured with oil and onions. It goes well with lobio, boiled potatoes or other pickled vegetables, such as peppers, tomatoes, cucumbers and garlic, to name a few. 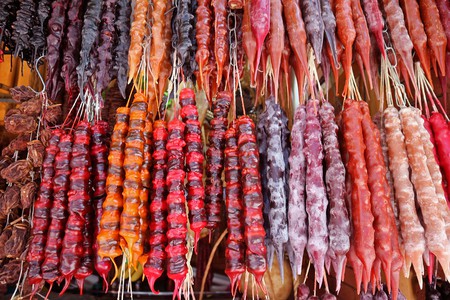 Churchkhela, often called Georgian sneakers, is a local candy made with toasted walnuts and nuts dipped in grape juice and hung to dry. This candy is sweet and satisfying and makes for a great snack during a long day of sightseeing in Tbilisi or elsewhere.