Why There's An Emerald Buried Near the Eiffel Tower

Laurent Derobert is an existential mathematician living in Paris’s Montmartre. His fascinating projects involve exploring the models and mazes of passion, measuring the gap between our dreams and realities, and even burying an emerald near the Eiffel Tower as part of a ritual to capture shadows.

Shadows are elusive dark creatures that mostly come to life in the dead of night, flickering their fleeting shapes beneath the streetlamp’s glare. But Laurent Derobert, with his trademark artistic brilliance and whose poetic projects always shake the tendrils of your soul, set himself the challenge of capturing its elusive essence like smoke beneath a glass.

His unique art of existential mathematics is always slightly obscure, lurking in the shadows of expectation. It involves mathematical operations being performed on poetic concepts, which, purely from a visual perspective, creates a curious cocktail of combinations.

This particular ritual saw him strive to seal the shadow of the Eiffel Tower beneath a nearby pavement. This took place during the brief eclipse that projects the Eiffel’s shadow onto the forecourt of the Palais de Tokyo. The performance was entitled Scellement de l’ombre (Sealing shadows) and coincided with the opening day of the exhibition of the “Edge of the Worlds.” 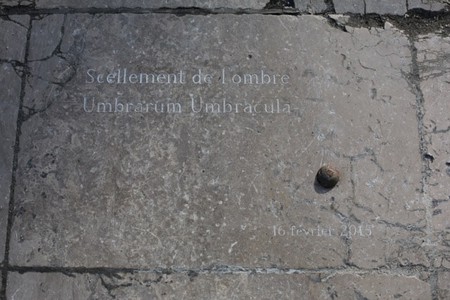 The project is based on the idea is that a splinter of time, so short it’s like an imperceptible birthmark on the memory of time, will be saved forever, and the exact moment that has been preserved within the stone is 14:11, February 16, 2015 (Paris). 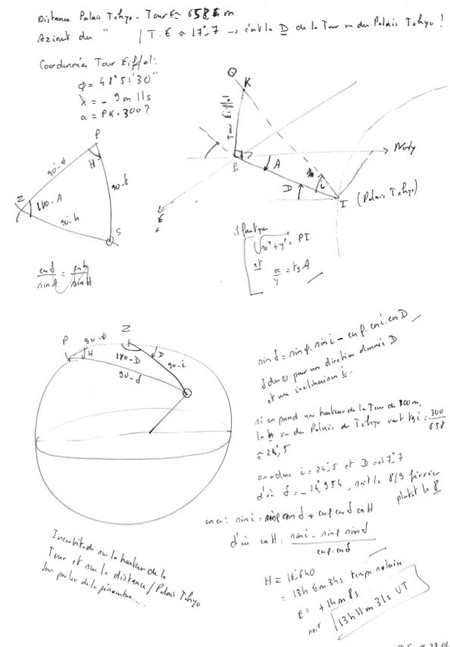 The meticulous calculations were made by Denis Savoie (astronomer of the Observatoire de Paris) and then sketched by Pablo Popall. As far as the physical traces on the pavement are concerned, the rivet that was used to seal the shadow along with a small emerald is an original rivet that actually lined the Eiffel Tower. 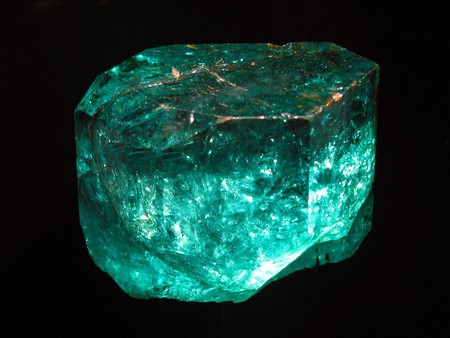 A short history of the shadow tells us that art, mathematics, and shadows have been entwined from the start. As legend has it, a departing lover was caught in candlelight and his shadow was cast on the wall. Its outline was traced by Butades, which is then said to be the origin of drawing. As far as math is concerned, trigonometric functions developed from the study of the lengths of shadows cast by objects of various heights. 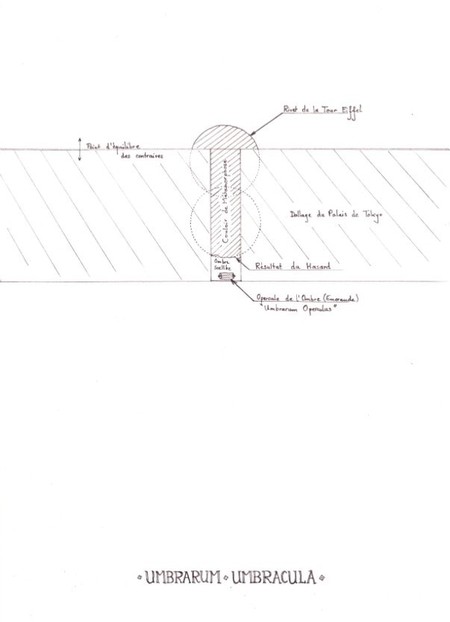 This isn’t the first time that Laurent Derobert has been involved with poetic forms of contemporary art at Palais de Tokyo. In 2015, the exhibition “Tiana’s Conjecture” saw him write equations using the tears of women who came to confess their deepest heartbreaks. 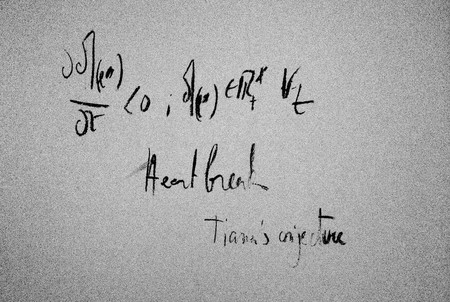 Tatiana’s Conjecture | Courtesy of Laurent Derobert
Give us feedback