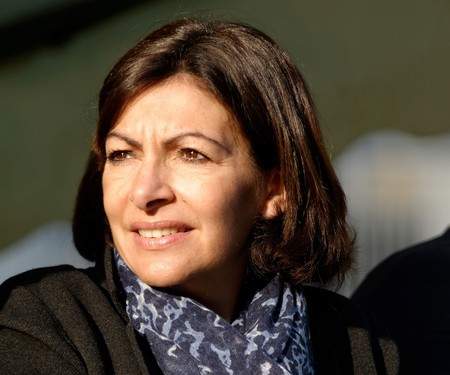 After two and a half years in France’s largest public office – a 155-square-meter, wood-paneled affair overlooking the Seine and the Parvis de l’Hôtel de Ville – Anne Hidalgo’s political capital continues to grow. Not only has she led Paris through its darkest days in a generation, she has successfully fought for policies that will make the city a fairer, smarter, and greener place to live.

For many, the most startling fact about Hidalgo is that she is not French by birth. Born in Spain and raised in Lyon, she gained dual nationality and changed her name from Ana at 14. In 1994, she joined the Socialist Party and from March 18, 2001, to April 5, 2014, served as First Deputy Mayor to Bertrand Delanoë (Paris’ first openly gay mayor). Her plan for improving the environment and housing won her the office. She has already extended bicycle and car-sharing programs, all but assured the pedestrianization of the Seine highway, and passed legislation to expand green spaces. Key environmental targets include phasing out diesel vehicles by 2020, making public transport electric by 2030, and ensuring the energy efficiency of public buildings by 2050. In August, Hidalgo was unanimously elected head of the C40 global cities group, enabling a worldwide rollout of similar policies. 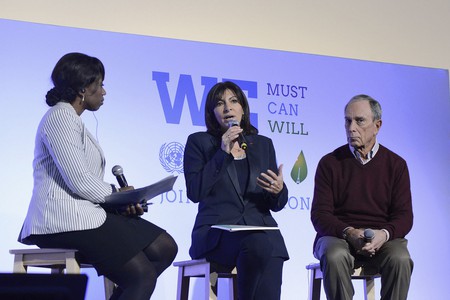 The annual creation of 10,000 new residences – 70% for low-income families – is another goal. For Hidalgo, it is essential that they, as well as centers for growing homeless and refugee populations, are spread across the arrondissements to promote inclusivity. This has been met with stiff resistance in Paris’ wealthiest quarters.

Twice, Hidalgo has set aside policy in order to be a unifying force for Parisians. After the terrorist attacks of January and November 2015, she was a familiar sight on the streets and in the media, where she spoke of tackling radicalization with education and inclusion. Indeed, her insistence on unity in diversity is one of her greatest strengths. During the mayoral elections, opponents attempted to use her foreign background against her but this, and her staunch support of minority groups, instead gave her the political edge.

On the matter of sexism, and specifically on her working relationship with UMP’s Valérie Pécresse, President of the Regional Council, Hidalgo has said: ‘We have different political ideas, but we work well together. I know the media prefers women in politics to be hysterical so they can portray us as aliens, but it’s hard enough already for a woman to get to the top in politics.’ Hidalgo also put paid to the usual irrelevant questions about her wardrobe early on, stating: ‘I am an elected official, not a model.’ On November 7th, she participated in a nationwide protest by halting a city council meeting at 4:34pm, the time after which women work for free due to unequal pay.

Hidalgo likes to maintain healthy competition between Paris and London. She once joked that if Britain voted to leave the E.U., she would roll out the red carpet for businesses wishing to cross the Channel, echoing former-mayor Boris Johnson’s comments before the Socialist government came to power. While Paris is still some way from taking over as the financial capital of Europe, it is quickly becoming the continent’s digital capital. Most notably, the largest tech start-up campus in the world, Station F, will open at the beginning of 2017. Hidalgo also lived through Paris’ defeat by London for the 2012 Olympics and has doubled down on the city’s bid for the 2024 Games.

Hidalgo’s detractors claim she is too much of a technocrat and lacks charisma. One recent example of this, presented in an April 2016 profile in The Guardian, was Hidalgo’s insistence on understanding the technical aspects of a flooding simulation during a public conference. Not one month later, the Seine rose to its highest levels in 30 years, causing traffic chaos and threatening riverside museums. In retrospect, it is quite comforting to have a mayor who prefers acquiring knowledge to spouting slogans.

She is also refreshingly frank. Asked about Donald Trump’s proposed ban on Muslims entering the U.S., she said simply: ‘Mr. Trump is stupid. He is very stupid.’ Following his election win, she said that ‘the shock is brutal’ and that it is ‘very bad news’ for those who want to live together peacefully and combat climate change.

So far, the mayor has split opinion: only 52% rated her first two years in office ‘favorably.’ Among under-35s and left-wing interviewees, this rose to 60% and 72% respectively. On the right, 70% said they were ‘unhappy’ with her performance. Regardless, Hidalgo’s popularity at the moment for a Socialist politician is impressive. Despite this, she deflects questions on a possible presidential bid once her mandate ends in 2020, insisting she is content in ‘the best job in the world.’