Who Is Altuzarra? The Designer Behind Evan Rachel Wood's Tux At The Golden Globes

When Westworld star and Golden Globe nominee for best actress in a television series, Evan Rachel Wood, showed up to the red carpet in a sleek tux, in a season when the pantsuit is a political statement, everyone asked the same question: who is Josehph Altuzarra, the designer behind Wood’s ensemble?

Wood told E! reporter Ryan Seacrest that her choice to don a tux was a nod to David Bowie (the Golden Globes fell on the late singer’s birthday) and silver screen sensation, Marlene Dietrich, and that her choice to wear a tux was based on giving young girls a different type of red carpet look to admire, “I’ve been to the Globes six times, and I’ve worn a dress every time, and I love dresses, I’m not trying to protest dresses,” she told Ryan Seacrest. “I wanted to make sure that young women and girls knew that they aren’t a requirement, and that you don’t have to wear one if you don’t want to. Just be yourself, because your worth is much more than that.”

In a season when the pantsuit was such a political statement, Wood’s sartorial choice couldn’t help from giving (even an unintentional) air of “protest.” Dietrich famously donned a top hat, tux and white bow tie for her role as cabaret singer Mademoiselle Amy Jolly in Josef von Sternberg’s Morocco (1930) to the shock (and delight) of audiences everywhere – as was the point. Dietrich’s look in “le smoking” (designed by Yves Saint Laurent) was designed to push boundaries as the gender-bending Jolly, dressed in androgynous formal-wear, kisses a woman on the lips in one of Morocco‘s cabaret scenes. 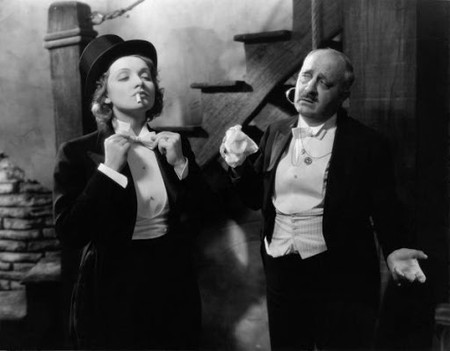 Wood’s Altuzarra tux also featured a pussy bow, which was a sartorial decision that also made headlines this election season, when Melania Trump wore two different pussy bow looks to two presidential debates. One can only wonder what truly motivated Wood’s tux, but in any case, the look was très chic.

But who is the designer behind the look?

“I decided not to wear dresses this year to be a gentle reminder to young girls that you’re not required to wear one if you don’t want to. Your worth is more than that. So just be yourself.” – @EvanRachelWood is a Rebel with a cause in every way, in a tribute to David Bowie and Marlene Dietrich. #GoldenGlobes With thanks to @samanthamcmillen_stylist. A photo posted by ALTUZARRA (@altuzarra) on Jan 8, 2017 at 5:07pm PST

The Golden Globes were not the first time Altuzarra dressed Wood for a Hollywood event. In 2016, Wood wore Altuzarra’s “Simeon” Jacket and “Jane” Pant to the Critic’s Choice Awards. At this awards ceremony, Wood took home the statue for best actress in drama for her work in Westworld.

The Altuzarra label describes its Spring 2017 look as “fiercely feminine,” merging “French sophistication with American pragmatism and ease.” Inspired by Roman Polanski’s thriller Frantic, where Emmanuelle Seigner stars as the epitome of Parisian badass glamour, Altuzarra’s Spring 2017 collection is for the woman who is unafraid to make a bold statement.

As the creative director of his label, Altuzarra envisions a line “to make the sophisticated modern woman feel seductive, strong and confident.” With Wood speaking so eloquently on a woman’s right to choose (pants) on the Golden Globe’s red carpet, I can’t think of a better muse to bring the Altuzarra mission to women around the globe. 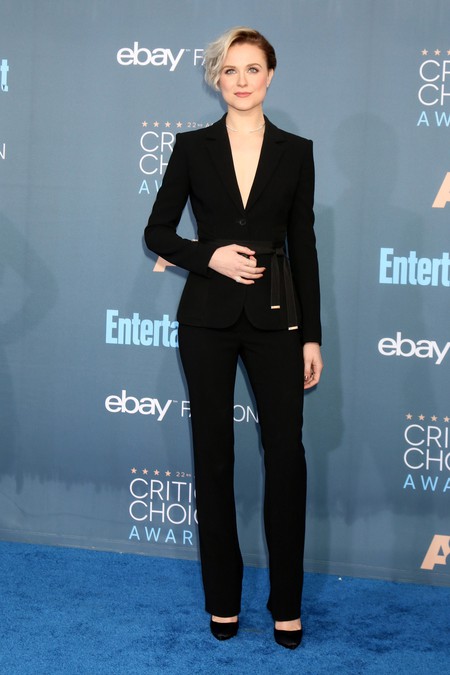