Who Are the Five Women Honoured in Paris’s Panthéon? 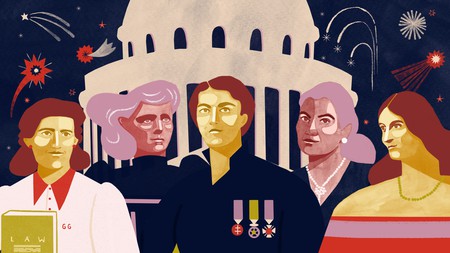 Paris’s domed secular mausoleum, the Panthéon, honours dozens of national heroes from French history, but only a handful of them are female. Culture Trip takes a look at the five influential women who are buried in the Panthéon and celebrates their long-overlooked legacy.

An inscription at the entrance to the Panthéon reads: “To its great men, a grateful fatherland”. And this focus on the male continues inside. Within the Panthéon, 72 men are interred, including philosophers Voltaire and Jean-Jacques Rousseau, which is almost 15 times the number of women buried in the mausoleum.

Nevertheless, from leading the battle to legalise contraception and abortion in France to fighting in the French resistance and pioneering scientific research, the legacies of the women inside the Panthéon are nothing short of extraordinary.

Marie Curie (1867-1934) was a French physicist and chemist of Polish descent who conducted pioneering research on radioactivity. She died in 1934, aged 66, as a result of the radiation she encountered during her scientific experiments.

Marie Curie was initially buried in the cemetery of Sceaux with her husband, Pierre, who had died 28 years earlier. However, 60 years later in 1995, the remains of both were transferred to the Panthéon in honour of their scientific achievements. The decision to inter Marie Curie in the Panthéon was unique, as she was the first woman to be buried on account of her triumphs.

This wasn’t the only first for Marie Curie: she was also the first woman to win a Nobel Prize, and the first person – and only woman – to win twice. In addition, she is the only person to have won a Nobel Prize in two different sciences.

Geneviève de Gaulle-Anthonioz was a heroine of the French Resistance

Geneviève de Gaulle-Anthonioz (1920-2002) joined the French Resistance after the occupation of France in June 1940. She was arrested by Pierre Bonny of the French Gestapo in 1943, imprisoned in Fresnes and later deported to Ravensbrück concentration camp near Berlin in February 1944.

After her liberation at the end of the war, Geneviève de Gaulle-Anthonioz became an active member – and later president – of the ADIR (Association Nationale des Anciennes Déportées et Internées de la Résistance). She also filed lawsuits against Nazi war criminals.

Most notably, in 1988, Gaulle-Anthonioz became a member of the French Economic and Social Council and fought for the adoption of a law against poverty. After a decade of campaigning, her law was finally enacted in 1998.

This law has inspired a wave of social welfare initiatives, including French Universal Health Coverage (CMU) and the DALO law, a step towards making the right to housing a reality.

Geneviève de Gaulle-Anthonioz was interred in the Panthéon in May 2015 as part of a symbolic ceremony. Instead of her remains, Gaulle-Anthonioz’s coffin contains soil from her grave, as the resistance worker expressed the wish to be buried with her husband, Bernard Anthonioz, in Bossey, Haute-Savoie.

Germaine Tillion risked her life to help others

Germaine Tillion (1907-2008) was a French ethnologist and member of the Musée de l’Homme resistance network in Paris during World War II. Among her most selfless acts of kindness, she is known for helping a Jewish family escape persecution by giving them her family’s papers.

Tillion helped prisoners flee and organised intelligence for the Allied forces between 1940 and 1942. However, she was betrayed by a certain Robert Alesch, a double agent working for the Nazis, who would sway people to join the resistance only to hand them in to the occupiers. Alesch joined Tillion’s resistance network and gained her confidence, before giving her up to the police.

As a result of Alesch’s tip-off, Tillion was arrested in Paris on 13 August 1942 and sent to the German concentration camp of Ravensbrück on 21 October 1943. She later escaped in April 1945 thanks to a rescue operation led by the Swedish Red Cross. The initial aim was to rescue just the Scandinavian prisoners, but on 21 April, the Swedish Red Cross gained permission to transport prisoners of Western European origin to Sweden.

After her liberation, Tillion remained vocal on several political topics. She protested against the French use of torture in Algeria and for the emancipation of women in the Mediterranean. In 2004, Tillion launched a statement against torture in Iraq along with several other French intellectuals. In honour of these efforts, she was buried in the Panthéon on 27 May 2015.

The French president at the time, François Hollande, used his speech during the symbolic ceremony to denounce the resurgence of anti-Semitism following the terrorist attacks on a Parisian supermarket earlier that year.

The problematic inclusion of Sophie Berthelot

Sophie Berthelot (1837-1907) was the first woman to be buried in the Panthéon and is often referred to as “l’inconnue du Panthéon” (“the stranger in the Panthéon”). Surrounded by politicians, scientists and philosophers, Berthelot made her way into this famous mausoleum on very different grounds.

Unlike the other people interred in the Panthéon, Sophie Berthelot is not remembered as a French national hero. However, her husband, Marcellin Berthelot, was world-renowned for his achievements in the field of chemistry. The couple died on the same day in 1907, and Sophie was interred with her husband “in homage to her conjugal virtue”. Marcellin Berthelot had specifically asked to remain beside his wife even in death.

Some French feminists have used this example to illustrate just how, historically, it has been easier for a woman to enter the Panthéon at their husband’s wish rather than on their own merits. The fight to redress this gender imbalance is ongoing.

Following the death of Simone Veil on 30 June 2017, aged 89, thousands of people signed a petition for her body to be buried in the Panthéon. Veil’s burial represented one of the rare instances in which French citizens have had their say on those interred in the mausoleum, and increased the total of female citizens from four to five.

A Holocaust survivor and women’s rights defender, Veil was famous for her fight as Minister of Health to legalise contraception and abortion in France in the face of strong opposition. She also introduced measures to help people with HIV and secured improved rights for prisoners and children in the care system.

Veil and her husband, Antoine, a high-ranking civil servant who died in 2013, were buried in the Panthéon on 1 July 2018 following their request to remain together.

Veil is the most recent person to be interred in the Panthéon. But there are campaigns led by the collective Osez le féminisme for more women to be added to the mausoleum, including the revolutionary proto-feminist Olympe de Gouges and the feminist writer Simone de Beauvoir.