Where to Find Amazing Street Food in Paris

In a bygone time, the term “street food” would have seen any Parisian turn up their nose in disgust. However, in recent years street food has metamorphosed into something else entirely: affordable gourmet food. With this explosion in popularity has come a wave of new, delicious choices. Here are our favorite picks of amazing street food from around the French food capital.

Right in the heart of the Jewish Quarter, one whole end of the street is lined with restaurants selling falafel and shawarma sandwiches. Do not be fooled by the term “sandwich” here, which may commonly be associated with a light lunch option — these “sandwiches” are exploding with filling and sauce. Go easy on the sauce piquante that you will be offered, as some vendors can be heavy handed with the spice. So which falafel stand should you choose? While L’As du Falafel is the most famous, the quality does not differ hugely between vendors. With such fierce competition, it is imperative that the standard remains consistently high, and all of the menus are similar. If it is a sunny day, try to resist eating it until you get to Jardin des Rosiers-Joseph Migneret (a little public garden conveniently placed just off the road); these sandwiches are not the easiest things to eat on the go, and you don’t want to lose half to the floor or down your front! 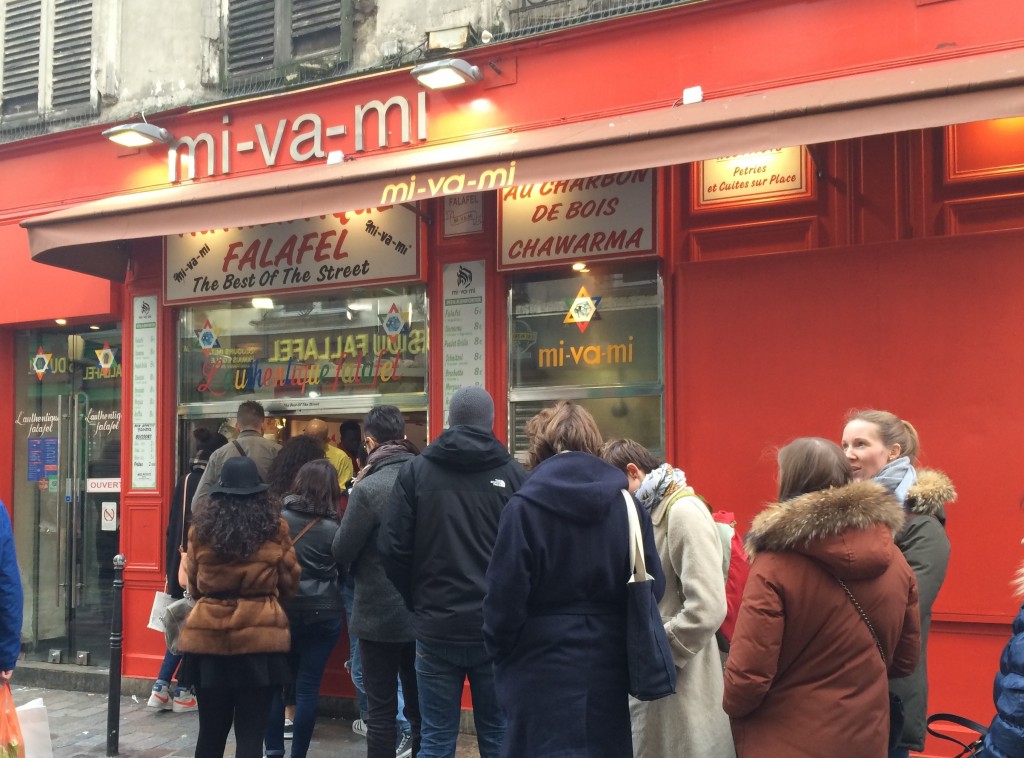 This is the spot for a slightly more “artisan” style of street food (and a big hot burger). The market that takes place here, in the first arrondissement, hosts street-food king (and now restaurant, too) Cantine California, which serves the ultimate gourmet burger. Cantine California was set up by an American man who has brought the burger to Paris in a big way, and its truck pops up all over the city, so be sure to catch it if you can. Missed it? Head to the restaurant in the third arrondissement.

If you are a late riser and unlikely to make it in time for the close of the market at 3pm, there are a few other street-food vendors around the square. Big Fernand has some particularly meaty burger options that rival those of Cantine California and stick to the same “quality ingredient” policy, while neighboring Café des Abattoirs does a mean meatball sandwich to take away during Saturday lunchtimes. 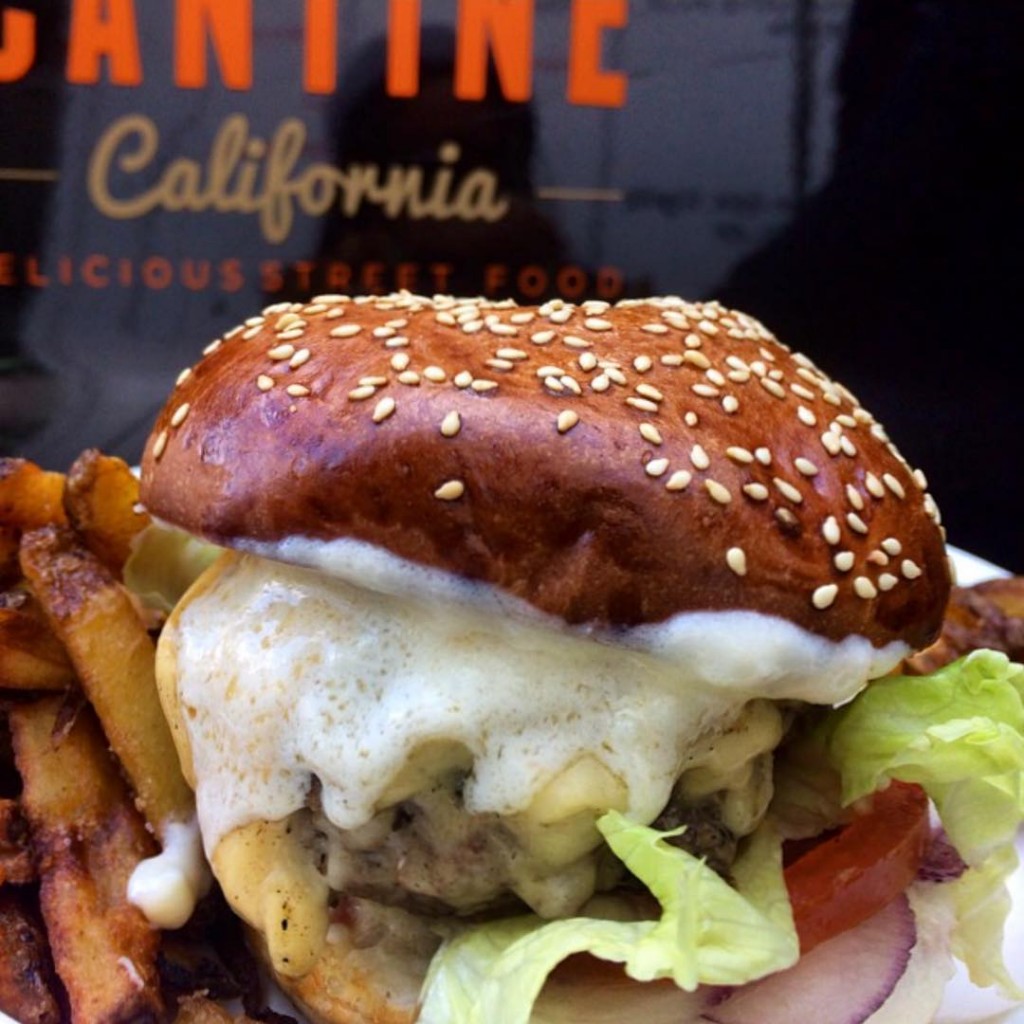 This is one of the most culturally diverse streets in the city and another road where you will find good, authentic street food for refreshingly reasonable prices. For the adventurous among us, part of the fun is taking a chance on one of the many street-food vendors all the way up the road. From Turkish, to Indian, to Lebanese, you will find some of the most authentic foods from Asia and the Middle East, with Passage Brady being a favorite for curries. Steer clear of those with gaudy photographed formule menu options and you will be fine.

However, if you want a fail-safe recommendation, Le Daily Syrien is it, where newsagent meets restaurant. The sandwiches (there’s that word again!) that you will find here are difficult to beat and are made right in front of you, so you can personalize your fillings. The aubergine caviar makes a very welcome and garlicky addition. 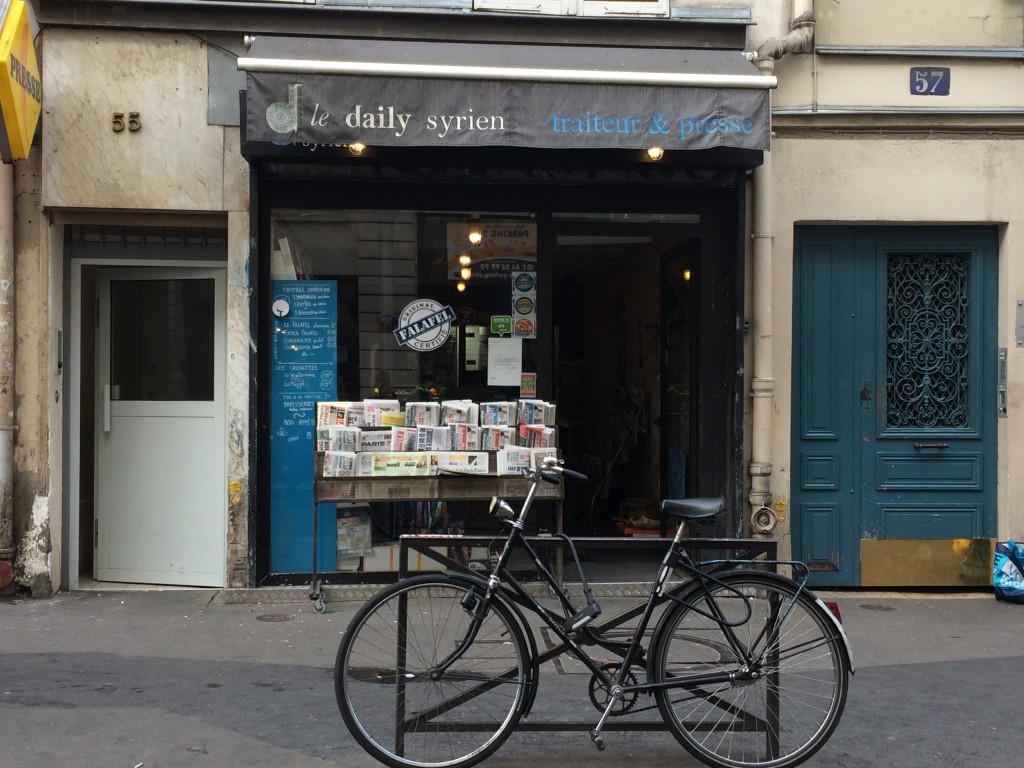 In the 13th arrondissement, in front of the MK2 Bibliotheque cinema, you will find a selection of food trucks, both at lunchtime and in the evening. Among these is a favorite among young Parisians, Le Camion qui fume, specialising in burgers. It can also be found at its permanent restaurant on Rue Montmartre.

Other trucks to be found here are: 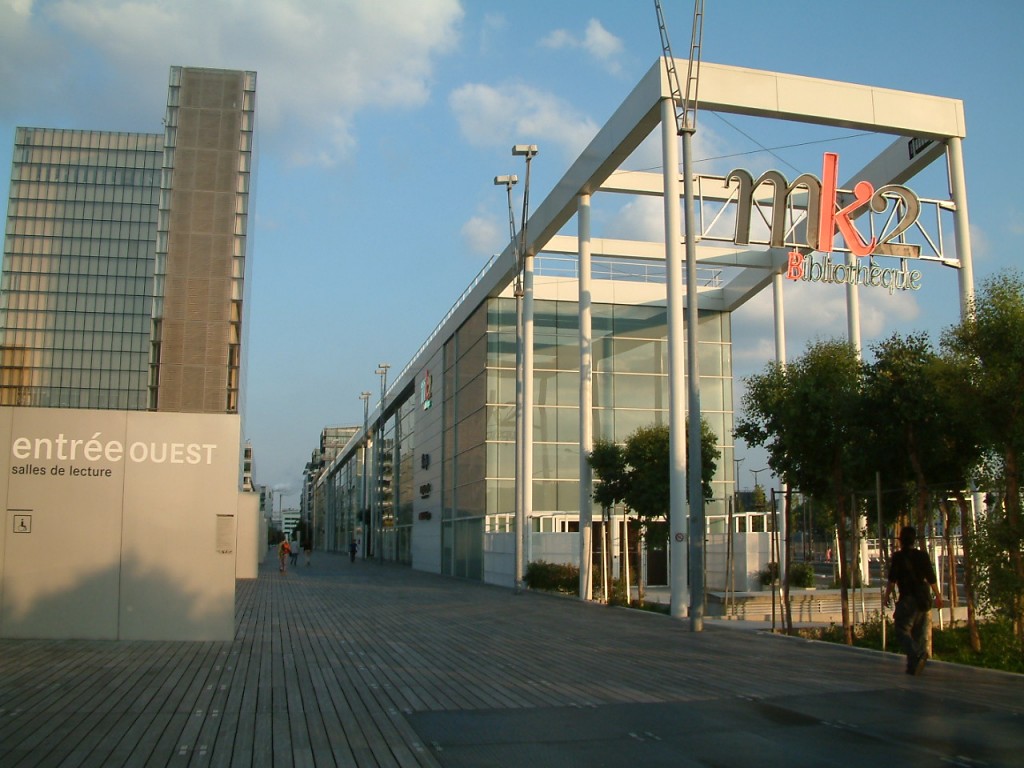 Step inside and you will find an absolute treasure trove of edible treats. Like the numerous markets across the city, there is the usual wonderful array of fruit, vegetables, cheese, meat and fish on sale here, but it also houses a number of food outlets, with meals prepared to eat there and then. Take a journey across the globe, with cuisine from South America to Africa, all under one roof. Eateries within the market include (but are not exclusive to) the following: 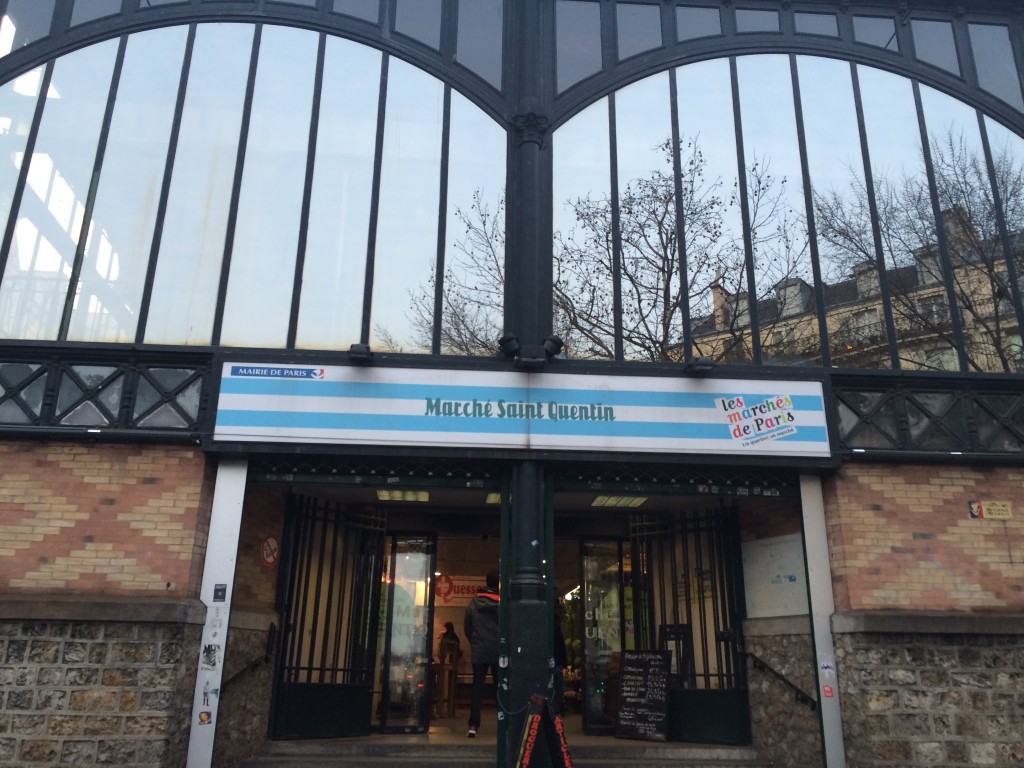 The simplicity of the menu is what makes this such a success, and the kebabs here will leave you with nothing like the usual 3am “probably going to regret this in the morning” feeling that we have come to associate with the dish. With only one meat on offer (veal), all you need do is decide which sauce tickles your fancy. The meat is succulent, the sauces are made from fresh ingredients and the men who serve you are delightful. You could ask for no more. The simplicity of the menu is reflected in the layout of the venue, which boasts nothing more than a few raised chairs and a counter. They know what they are doing and they do it well. 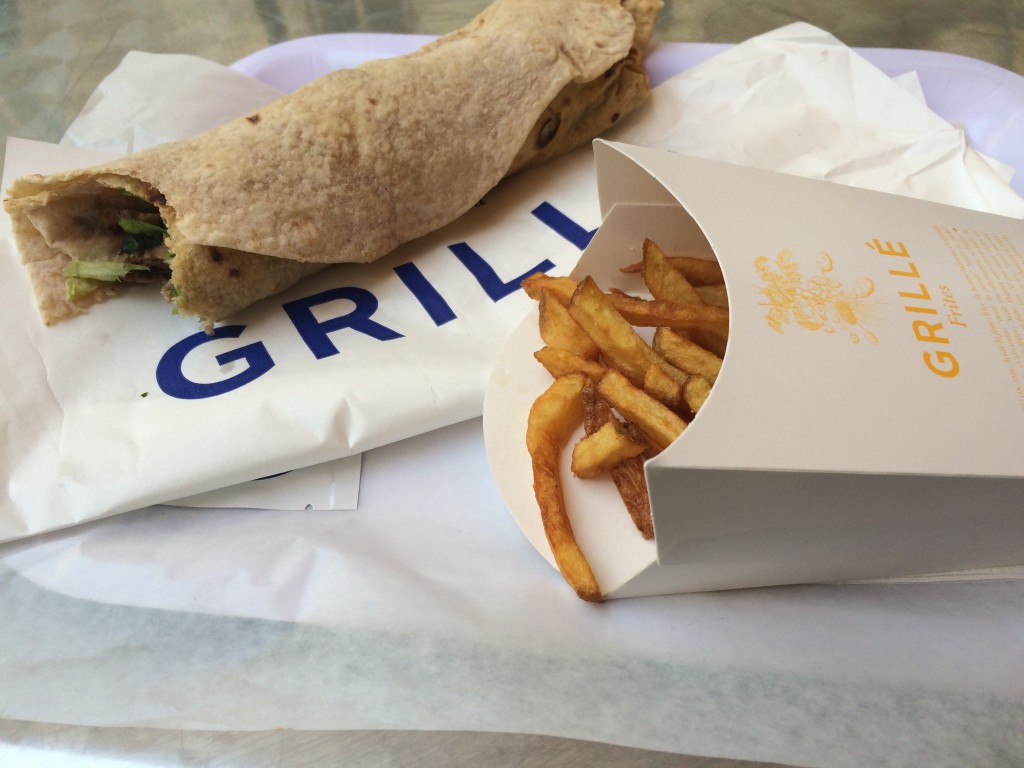 On a street where almost every shop is selling similar things, Juji-ya manages to stand out, as the quality of its food is exceptional. A Japanese grocery store/restaurant, you can expect an efficient in-and-out service from this straight-talking eatery — but don’t hope to be wooed by the staff; it’s clear they are there to get a job done! The takeaway boxes are separated in compartments, making for an easy eating experience, and the options are clearly presented in a glass-front refrigerator as you enter. All in all, a very regimented dining experience, but with food that does not falter. 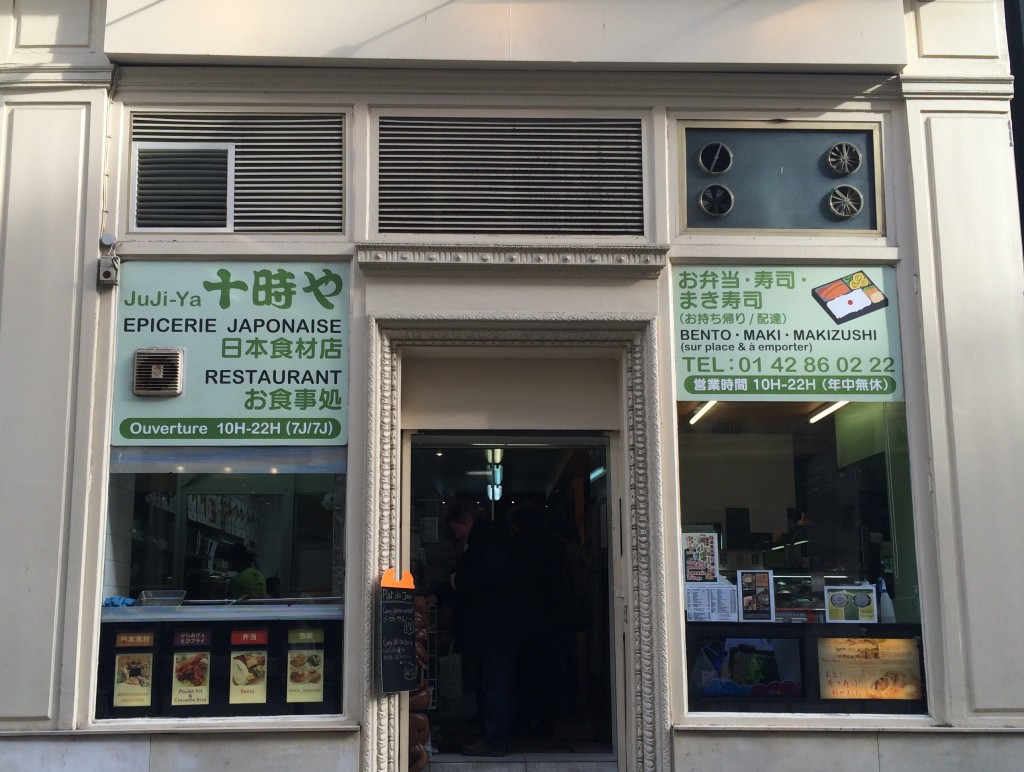 Rarely seen without a long queue of well-dressed, cigarette-wielding youths outside, this is a popular venue in the fashionable Quai de Valmy — and for good reason. Original in both design and menu, here you can sample unusual and experimental combinations of Thai food, at a very reasonable price (increasingly rare for this area). The papaya salad is a popular dish and can be incorporated into one of the formules on offer. Eat in if you can squeeze on a table, to appreciate some of the Bangkok-style street art that adorns the walls. 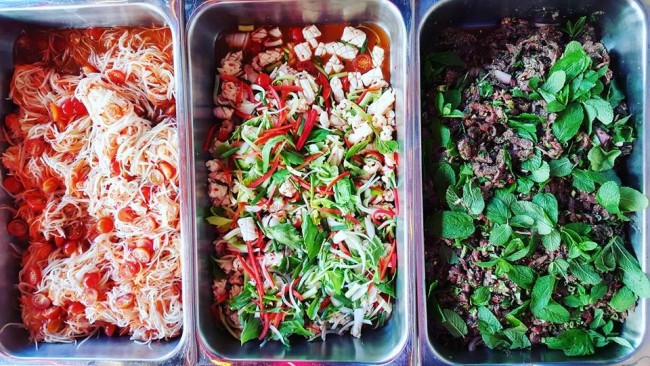 One of many things that the French are known for: the crêpe! You could not come to Paris without having one, and if you are looking for food on the go, this is your place.  Both savory and sweet options can be prepared in front of you, from the little window at the front of the store, which you can nibble as your continue your exploration of the Marais. What could be more French? 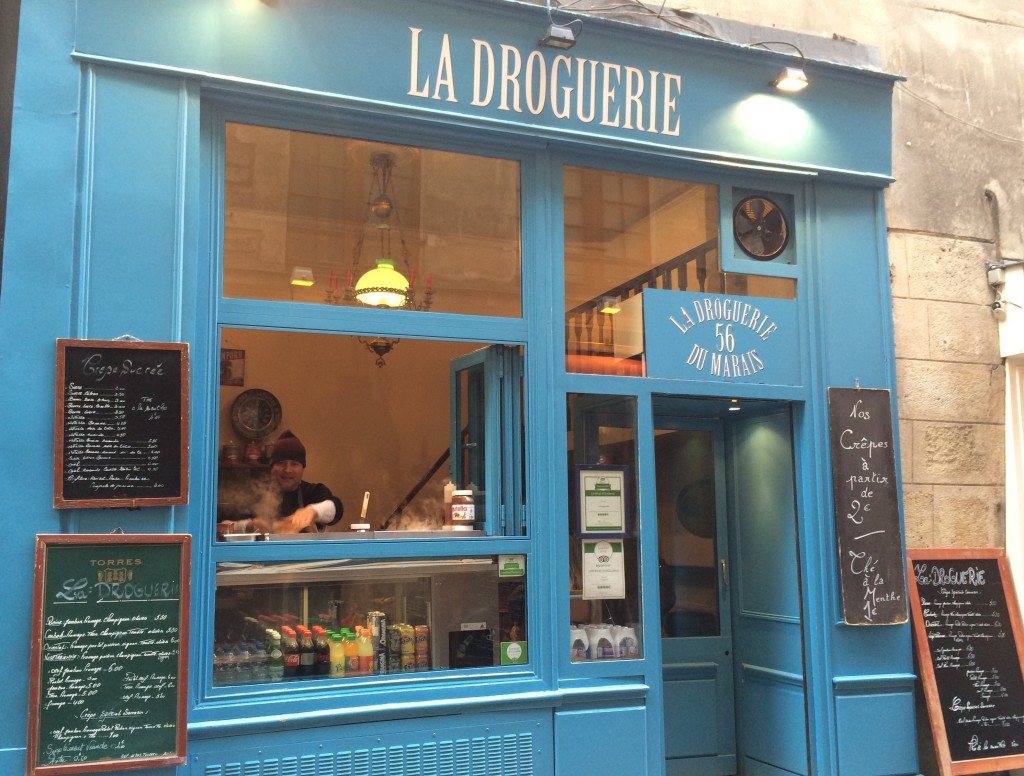 The speciality of Lo Zio is its piadine, a stuffed flatbread. The focus is on fresh and uniquely Italian ingredients, and the menu comprises a concise selection of fillings for the piadina, including various Italian meats and cheeses from the Emilia-Romagna region. If you have the time, it would be worth eating in. It would be silly not to go the whole hog and splurge on a side of arancini (fried balls of risotto) followed by the unbeatable home-made speculoos cheesecake. If you are in a rush, no fears! Innovative (if slightly gimmicky) tear-and-eat sandwich bags mean you won’t get sauce all over your hands.

Once a month, the road between Menilmontant and Couronnes metro stations transforms into a food market whose stalls sell ready-to-eat portions of expertly prepared food, which can be gobbled up at big, communal tables. There is a focus on providing high-quality food at reasonable prices, which makes for a convivial, sociable atmosphere from the get-go. Keep checking its website for future dates. 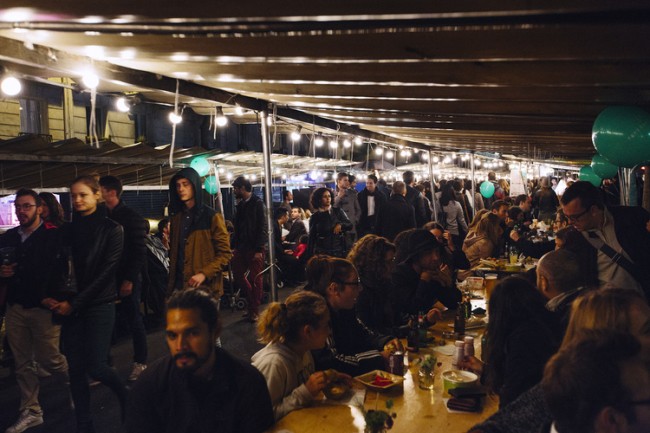 Every Friday and Saturday night you can book a table and spend the night eating and dancing here, in the Salon des Miroirs, where a number of the city’s favorite food trucks come to showcase their best food. €23 may seem a little steep, but this includes your choice of three courses and an evening of music. 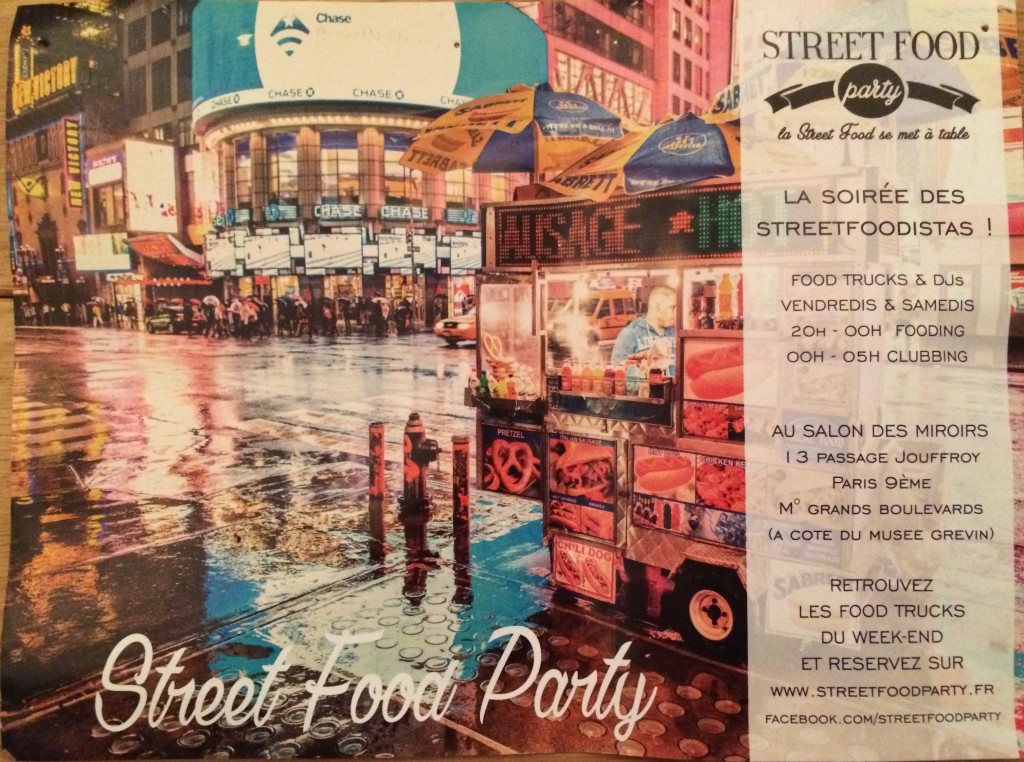