When Is the Best Time of Year to Visit Paris? 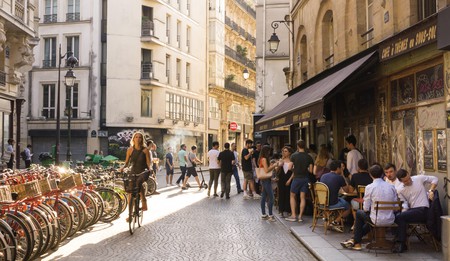 Is there any time of year that's not a good time to visit Paris? | © Soma / Alamy Stock Photo

From the Eiffel Tower to the Arc de Triomphe, Paris is well known for its glorious architecture and its gastronomic excellence, but the City of Lights is also renowned for its frequent rainfall. This month-by-month guide will help you weigh up the relative merits of a winter, spring, summer or autumn holiday.

With the festivity and fun of the holiday season still in the air, there’s no better way to start January than on the stunningly elegant Champs-Élysées in Paris, gazing at the fireworks display over the Arc de Triomphe. This is where the Parisian New Year’s Eve street party kicks off every year.

Throughout January, Parisian shop windows are also plastered with posters promoting the hotly anticipated winter sales (soldes). Whether you prefer to browse the tiny designer boutiques selling unique one-offs or dash by the bigger grand magasins, January is the best month for a Parisian shopping spree. There’s also the annual Traversée de Paris Hivernale, when the city streets roar with the engines of vintage cars, and Paris Fashion Week Men’s in January, dedicated to men’s fashion. 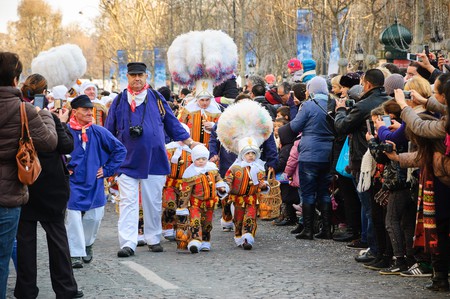 Whether you’re hoping to take a trip to one of the world’s most romantic cities for Valentine’s Day, or simply prefer to pay a visit when there are fewer crowds and shorter queues at museums and major landmarks, February is a good time to visit Paris. Celebrate Valentine’s Day at the best-kept secret in Paris, the Musée du Chocolat, or choose from a wealth of romantic cruises along the Seine. The carnivals start in Paris this month, too – enjoy the epic spectacle of Carnaval de Paris, a colourful costume parade with floats that provides a welcome burst of joy during the cold, grey winter days. A trip to Paris in February may have you swooning, but the weather is often chilly, so be sure to wrap up warm. 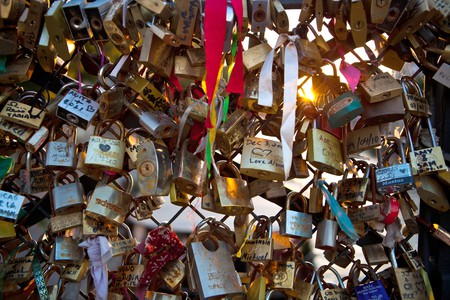 There’s a wealth of things to do in Paris in March. From the annual slashed cinema prices to an unusual marathon that involves racing up and down the Eiffel Tower, your trip will not be short of activities. Be aware, though, that March is a rainy month and one of the coldest times of year to visit Paris. In fact, locals have a saying, Il pleut des cordes (“It’s raining ropes”), that is a poetically accurate take on the endless force of the spring rainfall. Some years, it even snows in March. Despite the weather, this month is great for carnivals such as Carnaval des Femmes, a vibrant festival that began in the 18th century and features parties until dawn. 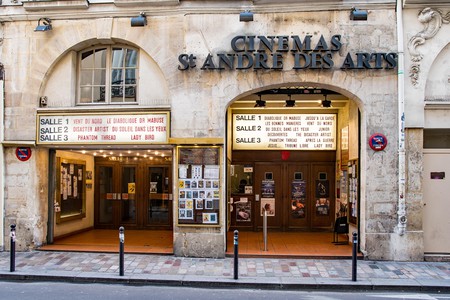 Paris is great during April, as the classic jazz song by Ella Fitzgerald and Louis Armstrong, ‘April in Paris’, confirms. And this is especially true around Easter, because the holiday is celebrated with huge enthusiasm here.

You’ll find a range of lively Easter markets and events, many of which are often clustered around the Notre-Dame cathedral, one of Paris’s most beautiful places of worship. Notre-Dame usually holds a Catholic service with Easter prayers and Gregorian chants on Easter Sunday. Even if you don’t speak French, attending a service will be a memorable experience.

Given the city’s gastronomic excellence, Easter also encourages long, multi-course lunches and dinners. If you visit later on in the month, you’ll notice that the Paris weather starts to brighten up, with much clearer skies. But it’s best to still pack your umbrella! 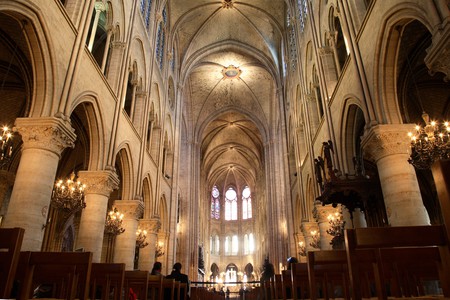 Paris in May sees the public gardens and parks bursting into blossom as the weather gears up for summer. There are festivals kicking off as the season gets underway, including the annual Paris Ukelele Festival and the Jazz à Saint-Germain-des-Prés, which has been running for nearly 20 years.

There’s no better time to marvel at the city’s artistic wonders than in May, when the city stages its annual edition of Nuits des Musées. Not only do more than 100 museums and cultural spaces in Paris stay open well beyond their usual hours, allowing visitors to discover masterpieces in the moonlight, but there are also plenty of special events, workshops, screenings and concerts. Entrance to many museums with guided visits is free on this day. 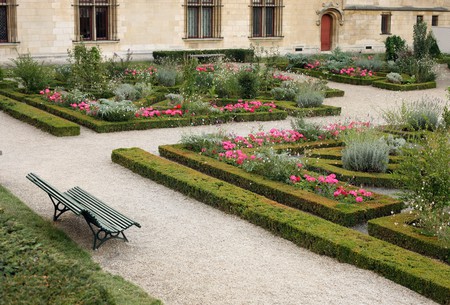 The highlight of travelling to Paris in June is soaking up the sunny outdoors in parks, sipping jacool drinks on a terrasse or dancing at one of the many live-music festivals. There’s the eco-friendly We Love Green festival that’s been taking over Bois de Vincennes in eastern Paris since 2011, Fête de la Musique, which has a history that stretches back to 1982, and the annual Django Reinhardt Jazz Festival, located on a small island on the Seine. While Paris itself might be a little busier than earlier in the year, this shouldn’t put you off, as museums start their extended summertime hours to accommodate the extra tourists. And if you missed the winter sales, fear not, as shopping gets even better when the summer sales season kicks off in June. 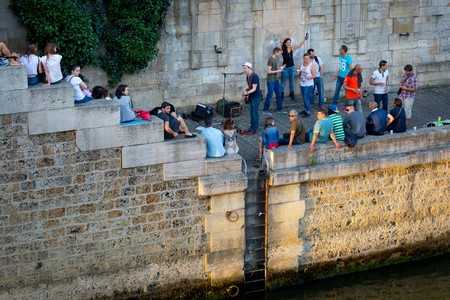 The most important festival in Paris – and the whole of France, for that matter – takes place on 14 July each year, and celebrates the storming of the Bastille and the start of the French Revolution. The occasion is marked by a massive military parade down the Champs-Elysées, a string of lively firemen’s balls and free concerts, plus incredible fireworks above the Eiffel Tower. A favourite with locals is the Fête des Tuileries, when a host of rides and attractions take over the famous Tuileries Gardens. Rediscover sweet childhood pleasures and enjoy the food stalls wafting the scents of the tastiest fairground delights at this funfair right in the heart of Paris. 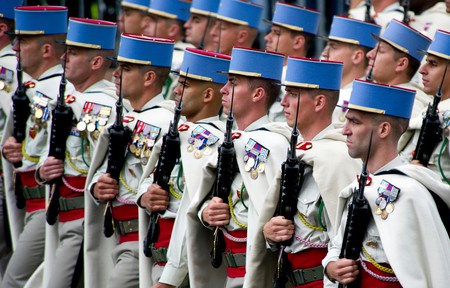 August is the hottest month in Paris, which makes it one of the most popular times to soak up the city sun and lounge around in one of its many green spaces. René Viviani Square is a hidden treasure from which you can view the wonder of Notre-Dame Cathedral without the hassle of the busy summer crowds or queues. But there are plenty of other secluded corners to explore. Les Arènes de Lutèce is an ancient Roman arena hidden in the 5th arrondissement of Paris, and is a great way to get immersed in the history of the city while avoiding long museum queues. There is one good reason to go back indoors, though – the Parisian summer sales wrap up in August, and prices really hit rock bottom. 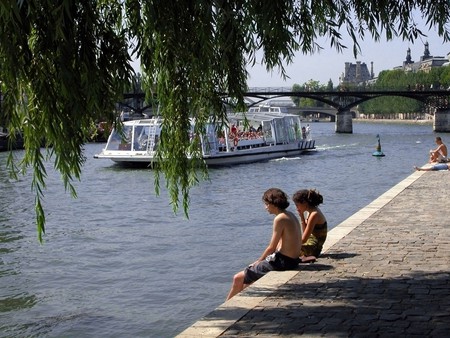 Paris in September will be slightly cooler than August, which makes travelling on the Métro a little more pleasant, as it gets incredibly stuffy in peak summer. There are still a few music festivals taking place, such as the annual Jazz à La Villette. Since it was brought back to life in 2002 under a new name, this has been one of the most hotly anticipated music festivals of the autumn, if not the entire year.

For culture lovers, the Opera en Plein Air initiative was launched nearly 20 years ago with the aim of bringing art to the masses, and its concert series now attracts close to 800,000 spectators. There’s also the famous Paris Design Week with exhibitions, cocktail parties, installations and debates galore. 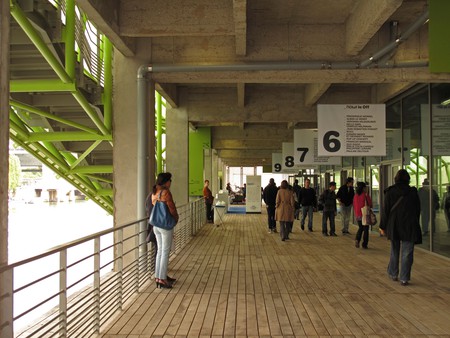 The season for sipping coffee on Parisian terraces until late in the evening starts to come to an end in October. But do not despair – a whole host of fun events and activities kicks off this month. At any time of year, a visit to Paris is a gastronomic delight, and around the end of October (or the start of November) the city holds one of the world’s largest shows dedicated to chocolate. Le Salon du Chocolat invites sugar lovers to sample an innovative selection of chocolate alongside workshops and performances.

Later in the month, the city’s Halloween celebrations are nothing short of magnificent, particularly at Disneyland Paris, where celebrations will delight both children and adults. Make sure to bring warm layers, though, as the temperature starts to drop in October. 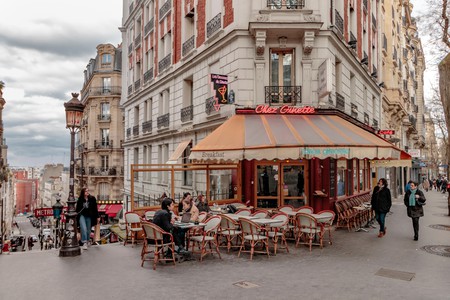 Paris draws closer to the off season with the approach of winter in November, but tourists still flock to the city in their thousands. The month usually opens with Pitchfork Music Festival, which takes place at La Grande Halle de La Villette. This is followed by the Armistice Day celebrations on 11 November, which surround the Arc de Triomphe in the heart of Paris, to the delight of huge crowds.

Later still, there’s Beaujolais Nouveau Day, which celebrates the new wine harvest and is marked in France on the third Thursday in November with fireworks, music and festivals, as well as free tastings. Another bonus is that November is one of the best months to find cheap flights or Eurostar deals. 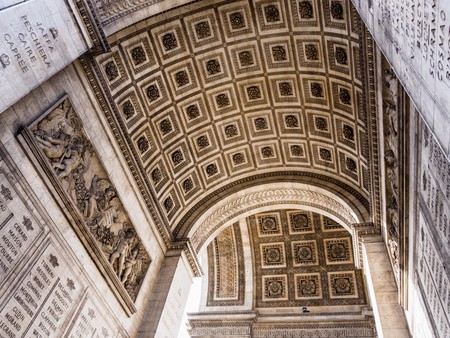 With Christmas markets offering gourmet tastings, festivities and fun across the city, December is a wonderful, joyful time to visit Paris. The wide boulevards are spruced up with luminous decorations and food stalls and there’s music to get you in the festive spirit. Paris’s artisan markets are a great place to buy presents crafted by local workers, and unique handmade souvenirs. The Christmas lights on the famous Champs-Élysées glow and visitors flock from all over the world to admire the illuminations. The spectacle makes for dazzling photographs, especially with the Arc de Triomphe in the background. 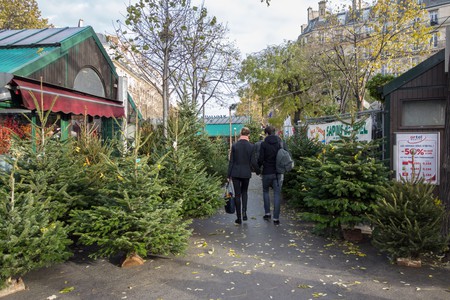 When not to go to Paris

To help you decide on the best time to visit Paris, it’s worth considering when not to go. Really, it’s down to personal preference, as there is no bad time to visit the city. Parisian weather can be cold in early winter (December to early January) and rainy in early spring (March to early April), so these months are not favourites among locals, but if you wrap up warm, there is still much to enjoy about the city. If you prefer to experience Paris in the summer months, this is the best time of year to make the most of its parks and gardens, and numerous music festivals and events take place at this time, too.