10 Must-See Artworks At The Paris Museum Of Modern Art 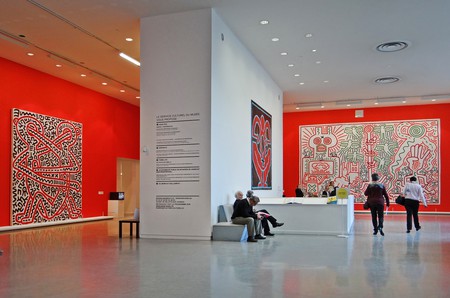 The Musée d’Art Moderne De La Ville De Paris is a museum located in the 16th arrondissement in Paris. It is dedicated to modern and contemporary art from the 20th and 21st centuries. The museum’s collection includes more than 10,000 works from art! Thankfully, the museum’s permanent collection is completely gratuit. For all the non-French speakers, that means free! Check out our list of the ten must-see artworks below!

French artist Robert Delaunay is best known in the art world for his involvement in the Orphism movement. Delaunay, alongside his artist wife Sonia, French poet Guillaume Apollinaire, and artist František Kupka, coined the term Orphism to refer to the art they were producing at the time. Orphism is a form of art that evolved from Cubism and Fauvism. Orphism focuses on bright colors and is also somewhat responsible for setting in motion the re-use of color during the monochromatic phase of Cubism. Delaunay’s La Ville de Paris is currently housed at the Musée d’Art Moderne in Paris and is an excellent example of Orphism. 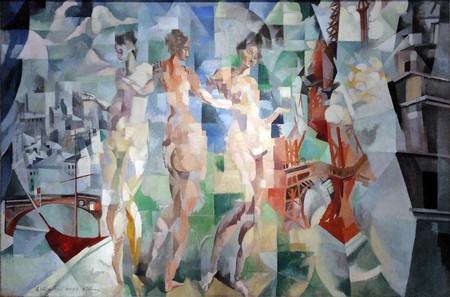 Amedeo Modigliani is an Italian artist that spent most of his life living in France – more specifically, in Paris. Modigliani is most recognized for his figures with elongated faces and, like most artists, his true talent was not acknowledged until after his death. Although Modigliani lived a somewhat tragic life, struggling with alcoholism and drug abuse and dying at the young age of 35 from tuberculosis, his artworks are some of the most sought after oeuvres in the world. To see Modigliani’s talents in person, Femme aux Yeux Bleus is a great piece with which to start.

Lovers of fine art across the world know all about Pablo Picasso’s famous ‘Blue Period.’ It was a period in a young Picasso’s life that can be characterized by his use of the color blue, and also by the depression the artist was experiencing in his personal life. The Blue Period also signals the artist’s transition from a classic style of art to a more abstract one. What many art lovers may not know is what catapulted Picasso into this period. The painter’s close friend, Carlos Casagemas, tragically killed himself at a crowded Parisian café in front of many of his friends after being rejected by a love interest. Although Picasso was not among those who were present, he has been quoted in saying, ‘When I realized Casagemas was dead, I started to paint in blue.’ Check out the origins of one of the most famous ‘periods’ in art by visiting Evocation ou l’Enterrement de Casagemas.

Albert Gleizes is a French artist, philosopher, and theoretician. He is most recognized for his early involvement in Cubism. Gleizes and fellow artist Jean Metzinger (whose work is also on this list!) wrote the first major formal essay on Cubism, the art movement that began in the early 1900s and continued until the 1920s, in 1912. Many art historians and critics believe that artists Pablo Picasso and Georges Braque are the founders of Cubism, but Gleizes was a self-proclaimed ‘founder’ as well.Les Baigneuses by Gleizes is an outstanding example of the earliest forms of Cubism. 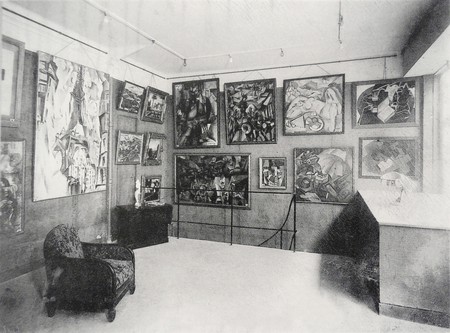 Henri Matisse was a major player in the art scene of Paris in the early 20th century, being a friend of Picasso and a favorite of art collector and writer, Gertrude Stein. Alongside Picasso, Matisse is credited in revolutionizing the plastic arts world in the 1900s. As a leading figure in modern art, it is no surprise that some of his works are housed in a room dedicated to the artist at the Musée d’art Moderne. La Danse and La Danse inachevée are the results of a commission from an American doctor who wanted a mural to display in his home. Matisse developed three versions of this mural, two of which now hang in the museum. 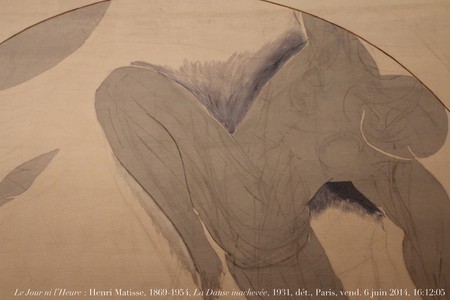 Pierre Bonnard is a French painter, illustrator and printmaker. Bonnard’s works can be recognized by their somewhat dream-like quality as far as his use of colors and viewpoint. He is also known for his very intimate domestic scenes, most of which include his beloved wife, Martha. Martha is the subject of Bonnard’s famous painting, Nu dans le bain. Bonnard painted five variations of the work, and the piece displayed at the Musée d’art Moderne is the lightest and most iridescent version. Bonnard’s use of colors and imagery is gorgeous in person, earning Nu dans le bain a place on this list. 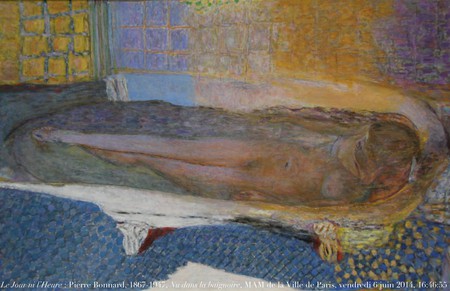 La Fée Electricité translates into English as ‘The Electricity Fairy.’ This massive mural by Raoul Dufy depicts the history of electricity across approximately 200 feet of wall space. Dufy was commissioned to create the mural by the Palais de La Lumière et de l’Electricité as a part of the 1937 World’s Fair in Paris. The piece is based on the first-century poem, De Rerum Natura (The Nature of Things) by Lucretius. In addition to this, the mural depicts portraits of over 100 inventors and scientists who have made meaningful contributions to the study and application of electricity. The mural is overwhelming and must be seen in person in order to truly understand and appreciate its beauty. 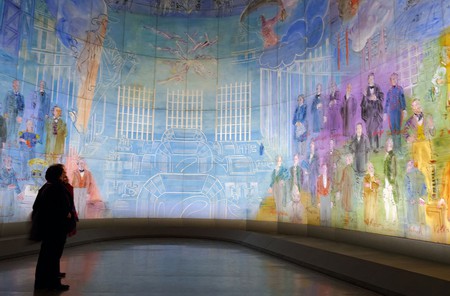 ‘When Matisse dies, Chagall will be the only painter left who understands what color really is’ – this is what Picasso famously said about Russian-French artist Marc Chagall. Although described as a painter by Picasso, Chagall successfully worked in many mediums including painting, illustration, stained glass, ceramics, stage sets, and tapestries, to name a few. A portion of the ceiling at the famous Opéra Garnier in Paris was painted by Chagall, and he also produced stained-glass windows for the cathedrals at Reims and Metz in France. Le Rêve (Le Lapin) is a perfect example of the dream-like imagery and surrealism Chagall is known for. 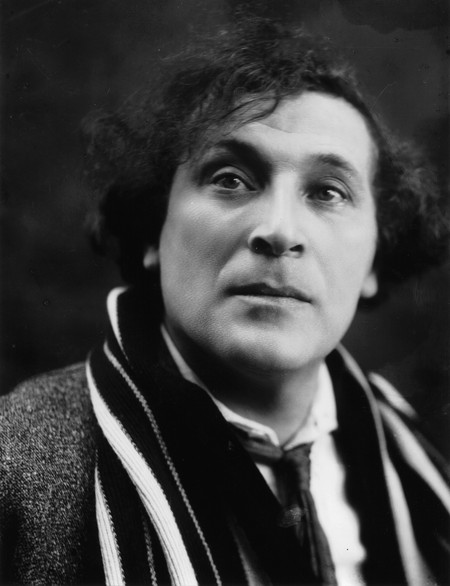 French artist, theorist, critic and poet Jean Metzinger, alongside Gleizes, co-wrote the first major essay on Cubism. Metzinger is said to have had such an impact on the art community, especially in Paris, because of his artistic personality. As Cubism became a big part of French culture, Metzinger was at the forefront of the artistic movement in Paris as a painter, theorist, and also as a friend to Picasso, Braque, Delaunay and other artists. L’Oiseau Bleu is a prime example of Metzinger’s work. It is also his most recognized and most referenced painting. The poet Apollinaire (who was very involved in the Cubist movement, as mentioned) has been quoted as saying L’Oiseau Bleu is a ‘very brilliant painting’ and ‘his most important work to date.’ Many would agree! 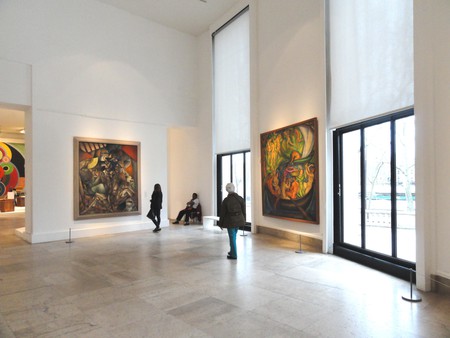 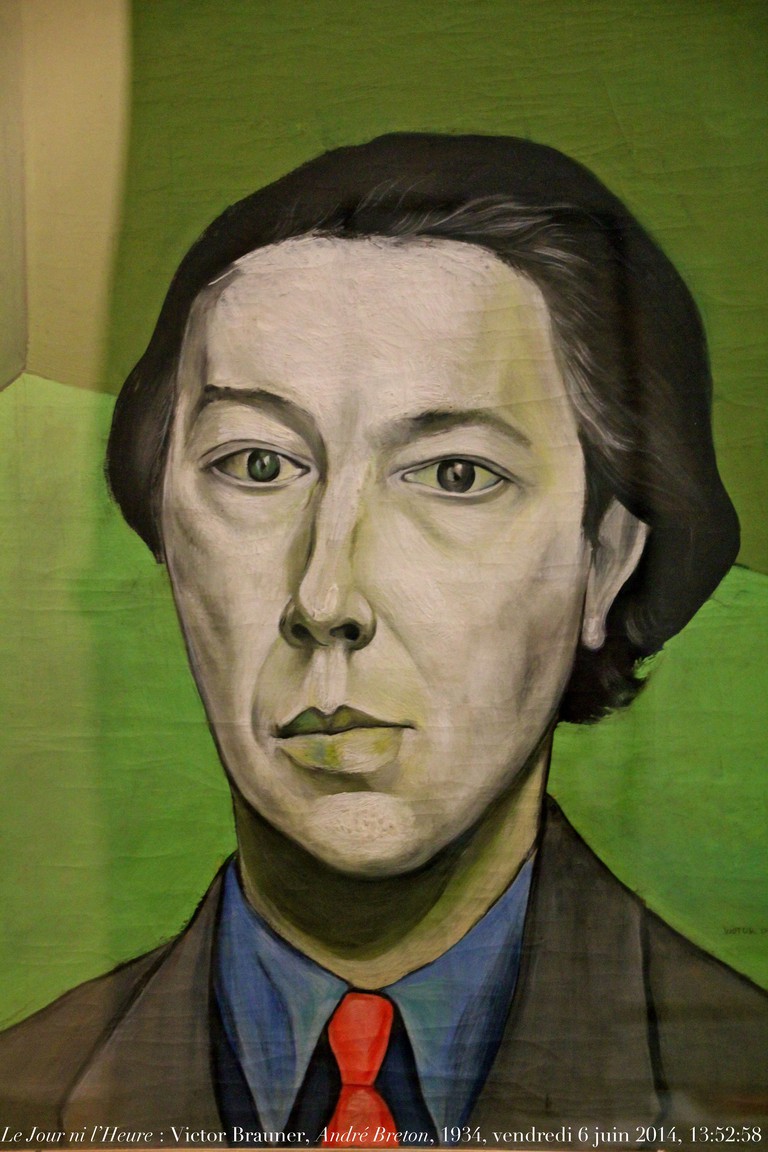 Portrait d’André Breton by Victor Brauner, 1934 | © Renaud Camus/Flikr
French poet and writer André Breton is said to have been the founder of Surrealism. So, it comes as no surprise that Surrealist painter Brauner chose Breton as the subject of one of his paintings. Indeed, Breton and Brauner were close friends and colleagues. The two even did a project together that satirized the bourgeois class in Paris in the 1930s. The Portrait d’André Breton is an outstanding example of Brauner’s talents and of surrealism at the time; therefore, it is a must-see!Musée d’Art Moderne de la Ville de Paris, 11 Avenue du Président Wilson, 75116 Paris, France,
Open In Google Maps
Paris, France
Give us feedback
Give us feedback