As the internet has attested, people can’t get enough pictures of cats. People have access to cat photos and cat art like never before, but cats have always been a part of the human race’s cultural endeavors, right back to ancient Egypt where cats were worshipped and glorified. Below are the top ten in art, limited to paintings and photographs, as the cat sculpture world puts even social media to shame. 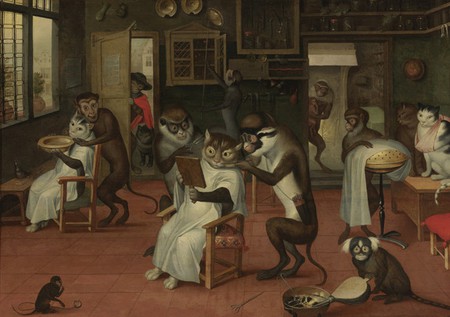 This is possibly the cat painting that can best be equated to the enduringly famous Dogs Playing Poker. However, the anthropomorphization in Abraham Teniers’ work predates its canine companion by nearly 400 years, and the surreal nature of its subject matter is quite captivating. Teniers was part of a Flemish artist family who specialized in genre paintings of villages, inns and, as logical follows, monkey scenes. The monkeys stay in this painting, but the cats are undeniably the stars, getting coiffed and ready for the weekend, served by their attentive monkey servants. There is curiously a cat in a sling to the right and a Puss in Boots-type at the door. It is a scene rich in action and the bizarre. 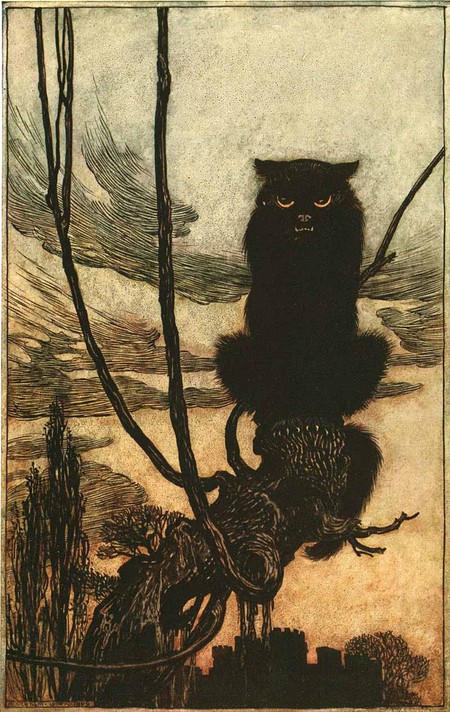 By Day She Made Herself Into A Cat, Arthur Rackham

By Day She Made Herself Into A Cat, Arthur Rackham (1920)

Arthur Rackham was one of the great book illustrators of the early 20th century. This painting took inspiration from a Brothers Grimm fairytale, in which the eponymous ‘she’ is a shape-shifting witch who turns virgins into birds and cages them. There is a malevolence in the cat’s expression and posture, which very much demonstrates why the cat is the witch’s animal of choice, and it is no real leap here to see that the cat is the animal form of a dastardly witch. With his work on other tales such as Hansel and Gretel and The Wind in the Willows, Rackham proved that he was quite adept at portraying states of mind through animals. Meow. 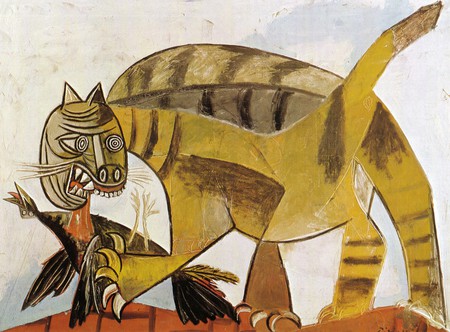 Cats and Cubism, it turns out, result in something that is altogether quite unsettling. While many cats in art are very much presented as either docile house cats, sitting patiently — or sullenly — on laps, or possibly in slightly odd scenarios, Picasso’s Cat Devouring A Bird portrays a cat in its natural way of being — as a hunter, devouring its most famous foe. This comes two years after Guernica and shows his continued interest in violence and chaos. There is no evidence of whether this was Picasso’s cat. It is mostly seen as an allegory of the Spanish Civil War, with the anger in the cat’s face being almost human-like. It takes a great master to make a picture that captures the essence of a cat’s nature while saying something wider about humankind.

Throughout the 18th and 19th centuries, advertising became increasingly sophisticated and, as has been attested by the popularity of coffee table books and shows such as Mad Men, has become a legitimate art form in and of itself. This poster by the Art Nouveau painter and printmaker Théophile Steinlen is both one of the most famous cat pictures and advertisements from history. He was commissioned to do the poster by befriending the artistic crowd at Le Chat Noir, a popular bohemian entertainment establishment that is widely thought to be the first modern cabaret club. While the club is long gone, the poster remains a mainstay on many a wall, and le chat being a perfect representation of much of 19th-century Paris. 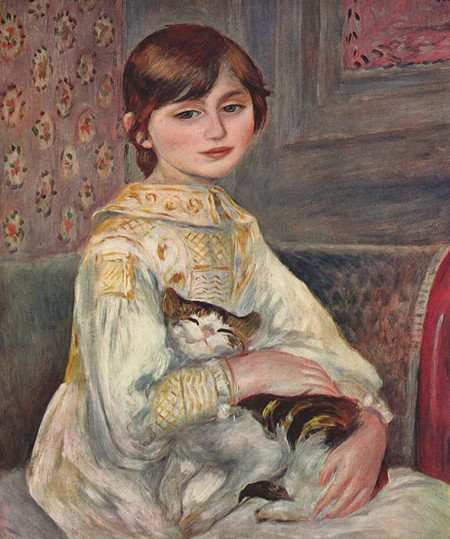 Sometimes the simple joy displayed in a painting is what makes it stand the test of time. Renoir created a number of paintings with cats as a subject matter, but this particularly stands out among his works as it was a magnificent example of the research that went into his art, with the maestro making at least four preparatory drawings for the painting and taking a number of different sittings and positions to form the final composition. Also known as Julie Manet, the subject of the painting is of Édouard Manet‘s niece, with her parents being close friends of Renoir. It depicts the simple pleasures and comforts of youth exemplified by feline folly.

The Cook and the Cat, Théodule-Augustin Ribot

The Cook and the Cat, Théodule-Augustin Ribot (1860s)

There is something very natural about a fish and a cat. That the fish is a cook’s fish means that the cat in this painting has a much easier job than his brothers in the wild, but there is still a playfulness in this painting, as the cat paws the object of its desire. The cook looks oblivious to the feline thief, as he attends to the rest of his meal, although he could be purposely ignoring the fact so that his furry friend can get a treat. Ribot was a prominent Realist painter — this everyday scene was very much in his typical style, offering the viewer a peek into the kitchens of the mid-1800s. 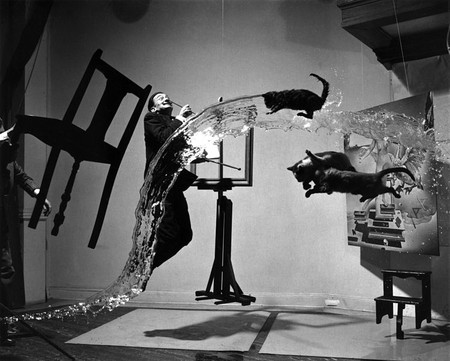 Some look down on photography as an art form, and considering that everyone has access to cameras, this belief does, in ways, logically make sense. Then you get someone so committed to their art that you truly appreciate the work that goes into composition. This may be quite an extreme example of this mantra, but the great Salvador Dalí was never one to do things by halves. In partnership with the portrait photographer Philippe Halsmann, the duo made a series of surreal photographic projects, with Dali Atomicus being the most iconic due to the fact that it all had to be composed in situ and without modern assistance, such as Photoshop. It took 28 attempts to get the final photo, which is 28 times that the cats had to be catapulted through the air — the price you have to pay for great art. 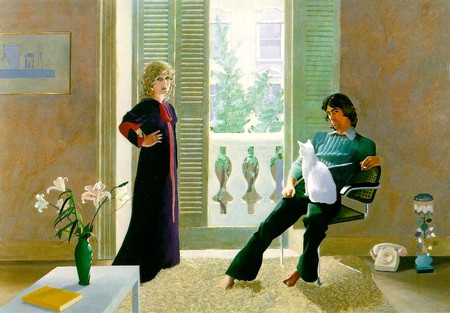 One of David Hockney‘s most impressive and renowned pictures is a portrait of his friends, the fashion designer Ossie Clark and the textile designer Celia Birtwell — and their cat Percy. Hockney created the portrait shortly after the couple’s wedding. It is rife with symbolism, and Percy is an important part of this. As he looks aloofly out of the window, more than just representing cat-hood, it alludes to infidelity, envy, and Clark’s bisexual affairs which plagued the marriage and eventually led to its demise in 1974. Hockney commented that the aim of the painting was to “achieve […] the presence of two people in this room [with the main aim being] to paint the relationship of these people.” Sometimes all you need is to add a cat to speak volumes on relationships. 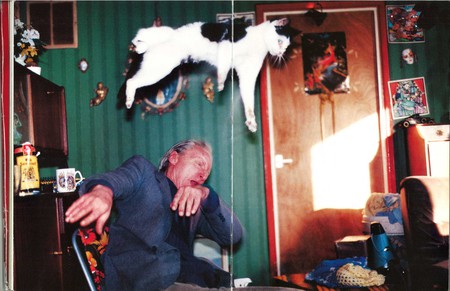 British photographer and artist Richard Billingham is best known for his photobook Ray’s A Laugh, a poignant and insightful documentation of the life of his mother and alcoholic father. The photo series is harrowingly honest, documenting much of his father’s alcohol-fueled activities and the effect that this has on those close to him. There are many heartbreaking and intimate moments, but one of the standouts — and arguably, whether sadly or not, most resonant with the millennial generation — is a well-timed picture of a cat mid-air while being thrown. It is a meme-worthy photograph that still has the color and tenderness of the rest of the series. 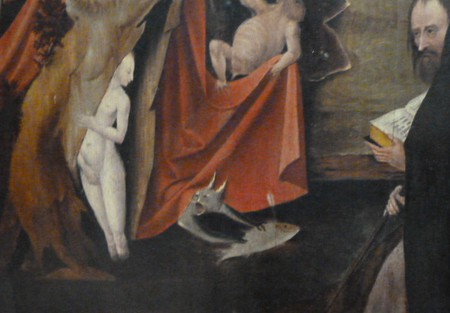 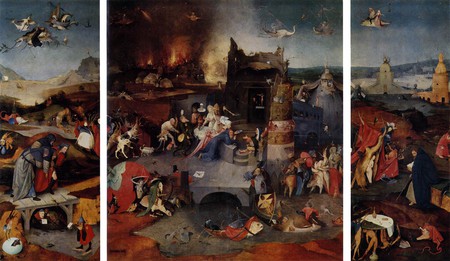 Triptych of the Temptation of St Anthony, Hieronymous Bosch

Triptych of the Temptation of St Anthony, Hieronymus Bosch (c. 1501)

This list shall end with one of the most harrowing pieces of art — cat or no — to ever have been created. Bosch is far from being the only person to take the story of the temptation of St Anthony as the subject of a visual art piece, but this is certainly among the most well-known interpretations of it. The triptych tells the story of the mental and spiritual torments experienced by St Anthony, and as was Bosch’s signature, it contains a variety of fantastical, mythical and disturbing imagery. On the right panel, in the wilderness, you will see a cat hissing at a woman who is trying to tempt hermit Anthony with her naked body. The fish is a symbol of Christianity, but cats — particularly this one, with its horn-like ears — were often emblems of the demonic.