To Be Young and in Paris: How the French Capital Is Seducing New International Talent 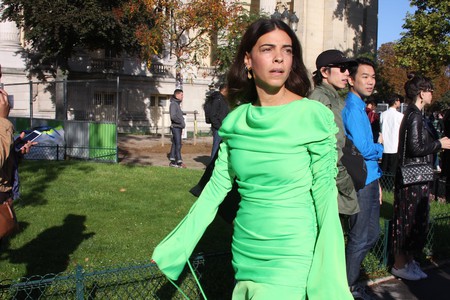 The fashion scene in London is more dynamic than ever, but young designers can’t seem to get enough of Paris. Culture Trip investigates the allure of the French capital, and what this means for the British fashion industry.

Having London Showrooms in Paris might seem like a strange concept given that London Fashion Week happens only two weeks before, but this British Fashion Council initiative is an invaluable way of getting the maximum exposure that new British talent needs. For while London might be the perfect place to expose and explore new ideas, Paris remains the main place to convert creativity into commercial success – a vital element for emerging designers.

This season, the British Fashion Council partnered with Tranoi for the first time, a move that Caroline Rush, CEO of British Fashion Council commented, was ‘designed to reinforce their place at the heart of Paris Fashion Week’. The move was a savvy one by the British Fashion Council, who in the past have faced challenges ensuring that the showrooms get an optimum amount of visits. Partnering with Tranoi ensures a huge amount of additional publicity, both from Tranoi’s own material and from the international press pick-up. This season Tranoi also provided a shuttle service between all three venues: a basic logistical function which makes it as easy as possible for visitors to get to all the showrooms – and when every day is rammed, the power of good logistics can’t be underestimated. 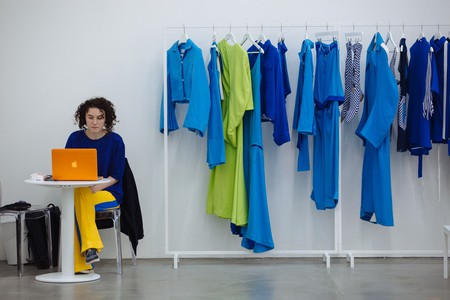 And it works: when I hop off the fashion bus and into the Marais showroom at Galerie VNH, the room is buzzing with editors and buyers, swarming around the rails and placing their orders. Meanwhile designers (this year included Eudon Choi, Roberta Einer, Sadie Williams, Richard Malone and Fashion East’s Supriya Lele) and their teams sit hunched over laptops, plugging sales into spreadsheets and using the opportunity to be out of the studio as a chance to catch up on post-London Fashion Week hype as well.

‘It’s been busy, which is great,’ says London designer Ryan Lo, ‘we’re getting a lot of orders’. In London, Lo’s punchy show took place at a church in Holborn and his collection was full of signature frills and playful takes on grown up femininity. In the more minimalist setting of the showroom, the designs still pull their weight, while offering an opportunity for buyers and editors to really spend time with the clothes. After a month of catwalk shows, having eight days to investigate is a relaxing reprieve.

Central Saint Martins graduate Mimi Wade – who did three seasons at Fashion East – is showing independently for the first time this season. Without the support of such a big platform she was worried it wouldn’t go as well, she tells me, but that happily has turned out not to be the case. Wade has garnered a cult following in London for her strong use of graphic prints (her graduate collection was inspired by horror films from ’50s Hollywood) and super-feminine, flirty silhouettes. Outside of the English capital though, there’s still a big international audience to seduce. Being in Paris again means reaching the widest possible pool of buyers and editors – when I stop by her stand, an American journalist is avidly proclaiming her love for Mimi Wade designs, using all the best adjectives and rendering it difficult to say anything complimentary that Wade hasn’t heard before.

Being in Paris also offers opportunity for dressing some of London’s most exciting models when they’re visiting: Adwoa Aboah (who, after enjoying a major week in London was over to walk shows for the likes of Chanel) borrowed one of Mimi’s designs and posted on Instagram, garnering over 18,000 likes – that’s the kind of invaluable exposure that comes from being where the action is.

It’s not just young London designers coming to the French capital. At the Tranoi showrooms at the Carousel de Louvre, designers from around the world debuted their collections underneath one of Paris’ most iconic landmarks. Only 11% of the designers showing are from France; with Turkish, Japanese, Italian and South Korean designers making up a large majority of those on show. 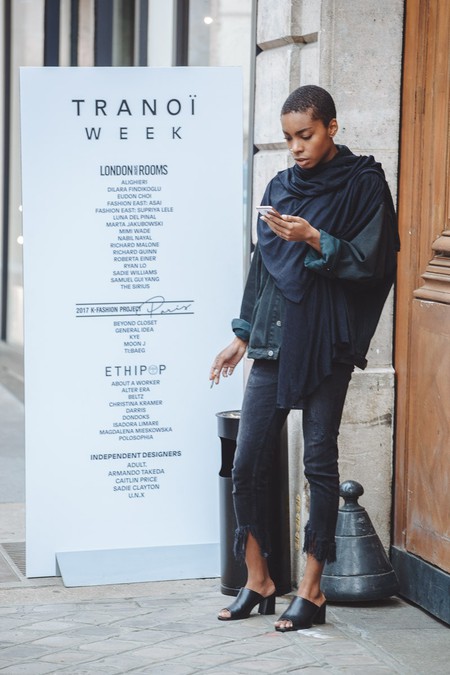 Outside the London Showrooms | © Culture Trip

‘It’s much easier because we’re fashion people, and there are fashion people here,’ says Bumsuk Choi, designer at General Idea. ‘Korea is only trendy in the media,’ he adds, responding to my probing that Korea is considered to be one of the most stylish countries in the world, ‘you walk around dressed like us and people think you’re crazy.’ Style aside, Paris also ensures stronger exposure for international creatives. ‘In Korea there isn’t the same platform for young designers to show their work,’ says Kwang Woo Choi of Genuin Verk, a new South Korean fashion collective. ‘Europe is much better for young international labels.’ What about London? I ask, Kwang shakes her head ‘London is cool, but Paris is the most vibrant place.’

‘Paris fashion is a real business industry,’ Dutch designer Liselore Frowijn tells me. ‘The scene is so big there, which means it’s a great setting to present my work.’ This year Liselore curated Tranoi’s event space, before finishing the week with a catwalk show set amongst the imposing columns outside Palais Brongniart. ‘Amsterdam is the perfect city for me to work in, and then I can take my presentation to Paris and show it to the greatest amount of people possible.’ 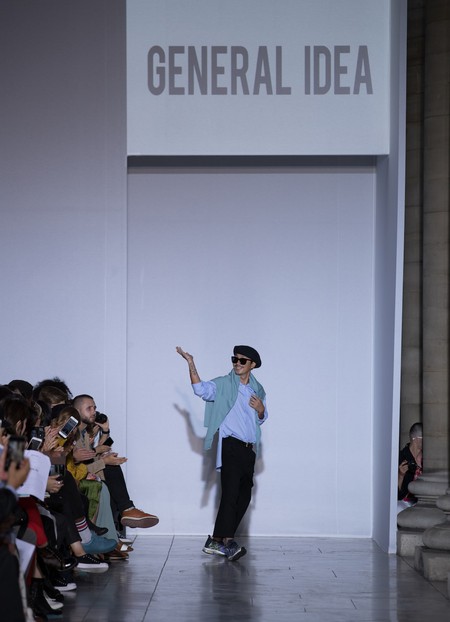 Indeed, in terms of offering a central location to show collections the positioning of Paris within Europe undoubtedly plays a part in attracting international, emerging talent. Easy access from across the channel – and a more liberal baggage allowance on Eurostar than any cheap airline – means Londoners can hop across without much effort, while the city is big and buzzing enough to accommodate the needs of international visitors.

As such, new French designers are staying put but finding creative and unique ways of getting attention. ‘A lot of French buyers prefer to invest in Céline or Balenciaga because it’s more obviously of value,’ says Zarah Müller, French artist and craftswoman who’s showing her brand Zatsu for the first time this season. ‘However if you do something that catches their eye then it’s okay, you can make sales.’ For Zarah, this ‘difference’ comes in the form of hand-painted silk pieces, complete with handmade wooden buckles. Each one-of-a-kind piece comes in a limited edition box, labelled with the number of production. ‘I want to globalise craftsmanship,’ she says, notably choosing to build her business with culture at the heart of the brand – next moth she’s travelling to Japan to learn how to paint gold leaf onto dresses. 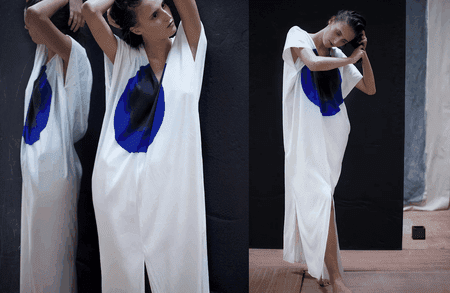 More established designers such as Coralie Marabelle, who started her own brand in 2012, are also building culture into the heart of their designs. Not only did she collaborate with French artists to create the pieces, but also showed her clothes in a format that was part catwalk and part dance-off. ‘French people are more conservative,’ she notes, but adds, ‘I feel free from [the legacy of Paris fashion]. That’s what is going to make my designs different.’

So with Brexit looming, does the power of Paris spell doom and gloom for London? Not at all. This season saw London offer one of the most exciting seasons of late, with a fresh and genuine embrace of diversity and sustainability, coupled with energetic and captivating collections from the city’s rising stars. The challenge will be to ensure that the creative vision stays strong enough to keep the international press engaged; that’s no small challenge, especially with the pace of the fashion industry, season on season. But given the calibre of design coming out of London, and the pick up in Paris, if anyone can make sure London stays open, it’s the class of 2017.