The Top 10 Things to Do in Louvre-Tuileries, Paris

The Louvre Museum | © Zoran Karapancev/Shutterstock
Paris, full of romance, beauty, history and culture, is a truly fantastic city to explore. However, with so much going on in the heart of the capital, whether it is museums, art galleries, famous landmarks or parks, it can prove quite a challenge to see and visit everything in a short trip. Here is a quick guide highlighting the unmissable attractions of the Louvre-Tuileries area.

Museum
Among the most famous museums on earth, The Louvre is also the world’s largest and most-visited museum, as well as being one of Paris’ most beautiful historical monuments, housed in the Louvre Palace. Holding a huge collection of items dating from pre-historic times to the 21st century, including the Mona Lisa herself, the Louvre offers a never-ending experience, as it is impossible to get through it all in only one visit. However, if the queues are too troublesome, walk around the grounds to appreciate the palace’s beautiful architecture and the glass pyramid in the courtyard.

A beautiful oasis in the heart of Paris, the Tuileries Gardens is the perfect place to relax after visiting the Louvre museum. Fountains, ponds and stunning garden make the Tuileries Garden a magical location. You can also enjoy the little bars and French cafés selling refreshments on hot summer days or warm beverages during the chilly winter. Running alongside the gardens is the River Seine and also visible in the distance is the spectacular Arc de Triomphe du Carrousel.

The Arc de Triomphe du Carrousel is among the most famous landmarks in Paris and is an important symbol of the French nation. Standing proudly in the centre of the Place du Carroussel, this magnificent arch commemorates those who fought and died for France during Napoleon’s victories, which happened a year prior to the construction of the arch. Although smaller and less-well known than the Arc de Triomphe de l’Étoile, this architectural masterpiece is worth visiting.

The Palais-Royal, built in 1629 faces the Place du Louvre and stands opposite the Louvre museum. Having once been the home of royalty, this immense structure is not open to the public, although its beautiful gardens and courtyard, known as the Cour d’Honneur, can be visited. The Cour d’Honneur boasts 280 black and white truncated columns and a sculpture by Daniel Buren, while the garden’s main focus is the picturesque central fountain, a favorite spot for those who want to take refuge from the hustle and bustle of Paris.

Paris’ famous cultural institution La Comédie Française, also referred to as the ‘Maison de Molière‘, is made up of three sites, but the building in the Louvre-Tulieries area is called the Salle Richelieu, located next to the Palais-Royal. Being one of the few state theaters in France, this cultural institution supports and promotes national theater and is the only theatre in the country to have its own troupe of actors. Visit this majestic theatre, which is just as stunningly beautiful on the inside, to have a magical experience watching France’s best performances.

Art Gallery, Building, Museum
59 Rivoli | © 59 Rivoli
Book Now
Located in the west corner of the Tulieries Garden, the Musée de l’Orangerie offers visitors the chance to see incredible Impressionist and post-Impressionist artwork in person. This small museum is home to many pieces by celebrated national and international artists such as Paul Cézanne, Henri Matisse, and Pablo Picasso, but is most famous for holding eight of Monet’s Waterlilies murals, which cover the walls of two showrooms. For anyone who is a lover of Impressionist art, the Musée de l’Orangerie is a must-see.
More Info
Open In Google Maps
Paris, Île-de-France, 75001, France
+33144504300
View menu
Visit website
Visit Facebook page
Send an Email
Give us feedback

One of Paris’ oldest medieval streets is the Rue Saint-Honoré, which is the place to go for shopaholics. France is famous for its unique style when it comes to fashion, so why not have a peep at the leading brands in the heart of Paris? All the world’s top boutiques, from the infamous to the less-well known, can be found here. Classy and niche, this street of luxury offers a fantastic experience to see the best of designer items as well as getting a taste of the more exclusive side of Paris. 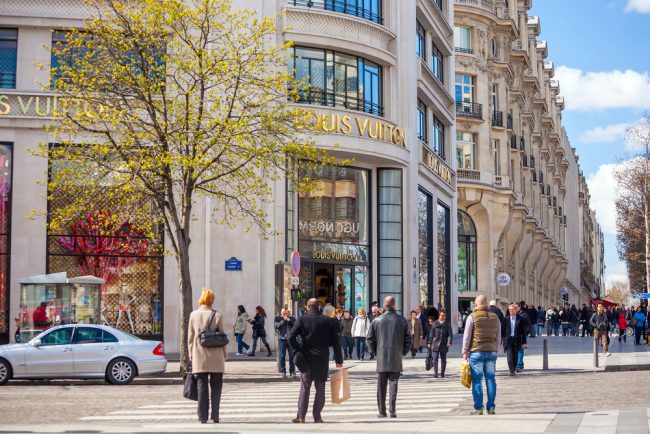 Crossing over the Seine from the Tulieries Garden is the Musée d’Orsay, which is located within the former railway station. This museum houses French art from the mid-19th century to the early-20th century, including, photography, furniture and sculptures. The architecture of the railway station allows the museum to feel open and spacious, giving the museum a welcoming and light atmosphere in which to enjoy the masterpieces on display.

The Place de la Concorde is the largest of the capital. In its center stands the magnificent Louxor Obelisk, an Egyptian column engraved with hieroglyphics and which stood at the entrance of the Louxor Temple. On the pedestal are pictures explaining how it was transported to the square in 1836. Beside the obelisk are two water fountains, ‘La Fontaine des Mers’ and ‘Elevation of the Maritime’, which have become the symbol of Parisian fountains. Do notice that the square is in fact octagonal, with a statue in each corner representing a French city.

Across from the Place de la Concorde on the other side of the river is the Palais Bourbon, a glorious Neoclassical building from 1728. This building is in actual fact the National Assembly of France, but was originally built for the daughter of Louis XIV, and overlooks the Seine, with the Tuileries Gardens on the other side of the river. The building is worth visiting even just to see the architecture from the outside, but internal visits are also possible with prior booking so plan ahead to take a peek at the impressive interior.