A Local’s Guide to the Best Things To Do in République, Paris 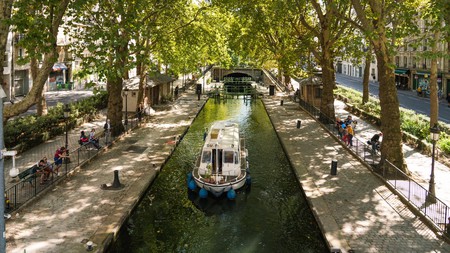 Three neighbourhoods converge on Paris’s Place de la République – the youthful Canal Saint-Martin, the historic yet hip Upper Marais and the trendy 11th arrondissement, which is brimming with some of Paris’s best restaurants – making it a diverse and lively area of the city to explore.

Paris’s République neighbourhood gets its name from the square and statue that dominate this convergence of the 3rd, 10th and 11th arrondissements, which together symbolise the free French Republic, founded in 1792 following the French Revolution. While République draws a host of hip residents and visitors, it was not always the bastion of trendiness it is today.

“République used to be a simple hub for transportation,” says Meg Zimbeck, the founder of popular restaurant review site and food tour company Paris by Mouth, adding that the neighbourhood has nevertheless evolved in recent years to become a hotspot for great eating and drinking. Today, it’s particularly popular with students and millennials. “This area is especially interesting if you want to rub shoulders with young Parisians,” she says.

“It’s an area that’s very much of the people,” says Lindsey Tramuta, journalist and author of The New Paris. “Demographically, it’s a mixed area (which is what I love about it) and a hub for convening and demonstrating.”

Here, local journalist Emily Monaco gives you an insider’s guide to the best things to do in République.

Place de la République is what gives this area its name, and it should be the first stop on an exploratory tour of the neighbourhood. Start with Marianne, the statue at the centre of the place and a French symbol of the revolutionary values of liberty, equality and fraternity.

The square was recently overhauled to make it more welcoming for passers-by – with public seating and water features added. Today, the pedestrianised space is a great place to hang out, especially on a warm summer’s day. “The urban furniture, sadly, has not aged well (it’s only been a few years),” says Tramuta, “but it remains a much more lively area to gather than ever before.”

The redevelopment also spurred on regeneration in the surrounding area. “Similarly,” Tramuta continues, “the changes inspired new businesses to [come to] the area and other regeneration projects, namely of the rue du Château d’Eau nearby, which has become something of a destination for food and shopping. Overall, it’s been ‘polished’ to a degree but still maintains the edge one would expect from a highly frequented subway hub.”

The square has now become a focal point for protest. “It has seen incredible demonstrations of civic engagement, movements of unity – particularly in the aftermath of the 2015 attacks – and festivity (concerts, dancing, etc),” explains Tramuta. And while people frequently gather here to protest, peaceful assembly is common too. “I’ve happily stumbled upon two-day concert series, animal fairs, parades and other cultural attractions,” says Tramuta. 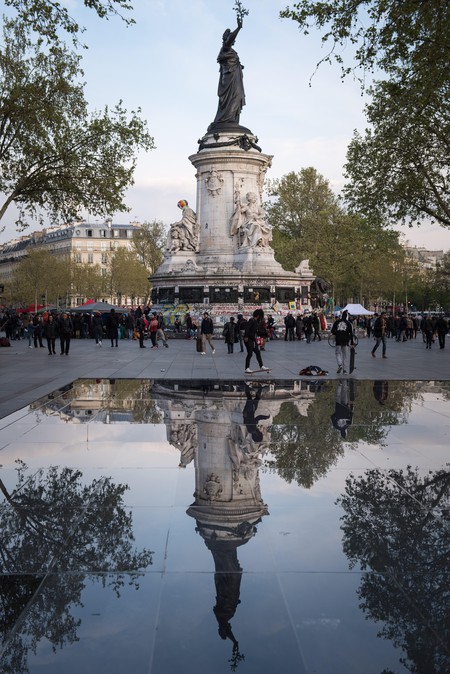 Aside from being a popular spot for protesting, République draws plenty of skateboarders. Take a seat at Café Fluctuat Nec Mergitur on the square of the same name, both of which are named for Paris’s motto – “She is rocked by the waves but does not sink.” It’s the perfect place to watch local kids perfect their ollies while you enjoy a glass of wine (or one of the most reasonably priced cups of coffee in the French capital).

Paris is home to nearly 100 morning markets, which pop up in different neighbourhoods depending on the day. The Marché des Enfants Rouges, however, stands out as the oldest covered market in Paris. It’s open all day every day, except for Mondays, and it’s home not only to vendors of produce, cheese and fish but also to a range of restaurants. Try out the exceptional Les Enfants du Marché for prime people-watching and delicious tapas, or snag a simple but flavourful sandwich from famous shop Chez Alain Miam Miam. 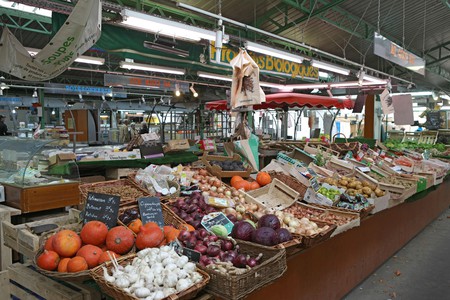 Eat like a local on a Paris by Mouth food tour

To learn about the local food scene, join one of the small group tours around République from Paris by Mouth. Expert guides will introduce you to the best that the neighbourhood has to offer in terms of French cheese, wine, chocolate, bread and more. You’ll leave far fuller and far wiser. Be sure to book early – these tours fill up months in advance. 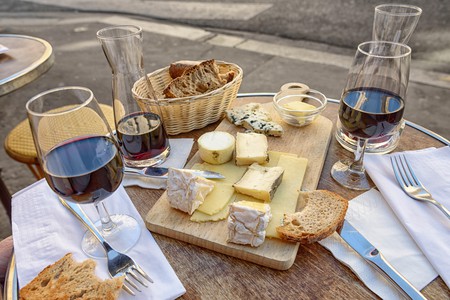 Uncover the tastes of an artist at the Musée Picasso Paris

Head into the Upper Marais to encounter the newly renovated Musée Picasso Paris in the gorgeous Hôtel Salé – a former private mansion in the Baroque style dating back to the 17th century. The museum is home not only to some of the master’s great works, such as La Celestina from his Blue Period, but also to Picasso’s private art collection, which includes works by artists such as Cézanne, Matisse, Degas and Renoir. Like many museums in Paris, this one is closed on Mondays. 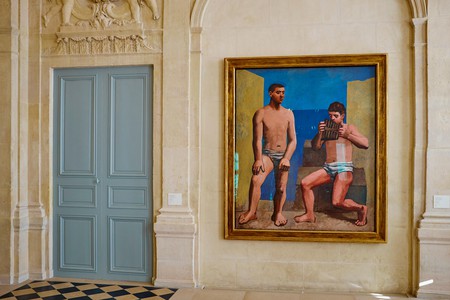 The Musée Picasso Paris has works by Picasso, such as ‘The Pan Flute’, 1923, and others | © Tuul and Bruno Morandi / Alamy Stock Photo

Enjoy art inside and the view outside at the Centre Pompidou

If you head a little farther south, you’ll stumble upon France’s national museum of modern art. The ultra-modern building, which dates back to the early 1970s, is home to works by such masters as Jackson Pollock and Henri Matisse. The Centre Pompidou also plays host to regular visiting exhibits. Some of the best views of Paris can be seen from the escalators that carry visitors along the outer walls of the unusual, inside-out, high-tech-style architecture of the building. Note that the Centre Pompidou closes its doors to the public every Tuesday. 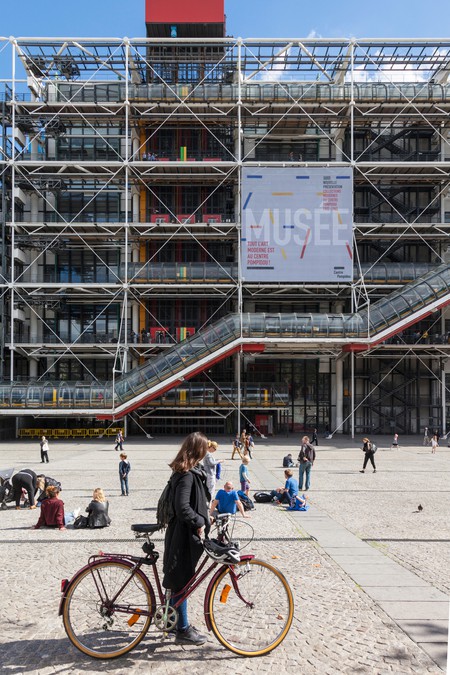 Enjoy a Parisian picnic on the Canal Saint-Martin

While walking northwest from Place de la République, you’ll encounter the Canal Saint-Martin, a former source of drinking water for Parisians that has since become a trendy part of the neighbourhood. When the weather is pleasant, the banks are brimming with residents picnicking on baguettes, the perennially popular pistachio escargot pastries (named for their snail-like, pain-aux-raisin-style shape) from nearby Du Pain et des Idées, or perhaps cheese from La Crèmerie. Lavadenz notes that while “it’s not really a secret” to residents, an insider’s tip is to head over to Le Verre Volé, a wine shop and bar barely a block from the canal known for its selection of natural wines, for a bottle to enjoy on a sunny afternoon. 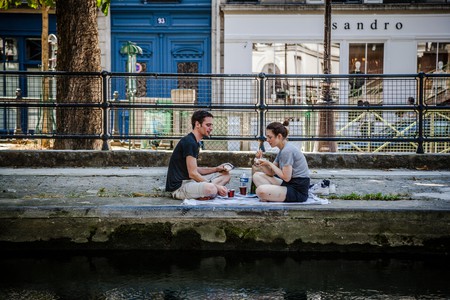 Soak up art and culture at Le Point Ephémère

Le Point Ephémère is a cultural hub at the far end of Canal Saint-Martin that is known for its regularly changing schedule of cultural events, ranging from concerts and art exhibitions to tarot readings. The venue is also home to dance, art and music studios as well as an inexpensive restaurant, Selma Pastel, boasting Afro-fusion cuisine inspired by the Caribbean, France and beyond. 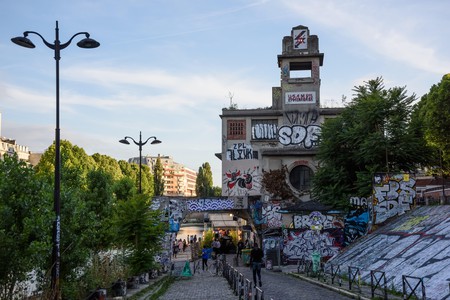 Le Comptoir Général is hard to define. Part bar, part event space and part restaurant, it’s best known as a hip place to relax and hang out with friends. Eclectic and easy-going, this shabby-chic space describes itself as a “haven of escapism”, has a tropical garden and is dotted with African souvenirs. It boasts plentiful (though, given its popularity, rarely enough) seating space and areas for dancing, chatting and for shopping and perusing occasional pop-ups. Keep an eye on the venue’s Facebook page for upcoming events such as concerts, guest DJs, brunches or screenings of major football matches. 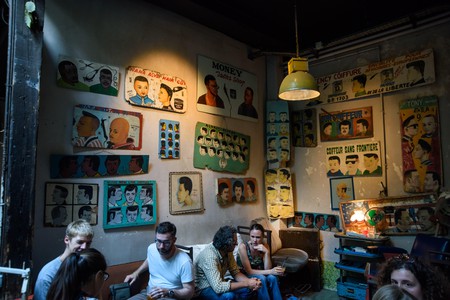 Sleep with a view of the canal at Le Citizen Hôtel

The Le Citizen Hôtel is a favourite among young visitors thanks in large part to its ground-floor bar, which is ideal for people-watching, and its internationally inspired tapas menu. The trendy hotel boasts 12 tastefully decorated rooms with Scandinavian-inspired interiors and a view of the Canal Saint-Martin’s famous movable bridge, Pont Tournant de la Grange-aux-Belles. It’s also right around the corner from Ten Belles café, which serves up some of the best coffee in the area.