The Most Stunning French Desserts 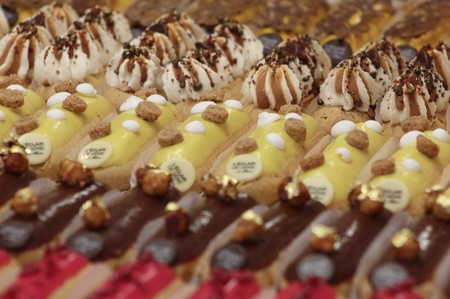 When walking down the alluring streets of Paris, you can expect to be captivated by countless cafés and salons de thé. The French capital also offers hundreds of mouthwatering pâtisseries. We’ve made it easier for you and carefully selected the most beautiful and tasty desserts in the city. It’s a big world out there in Paris if you have a sweet tooth, so we’ve narrowed it down for you. 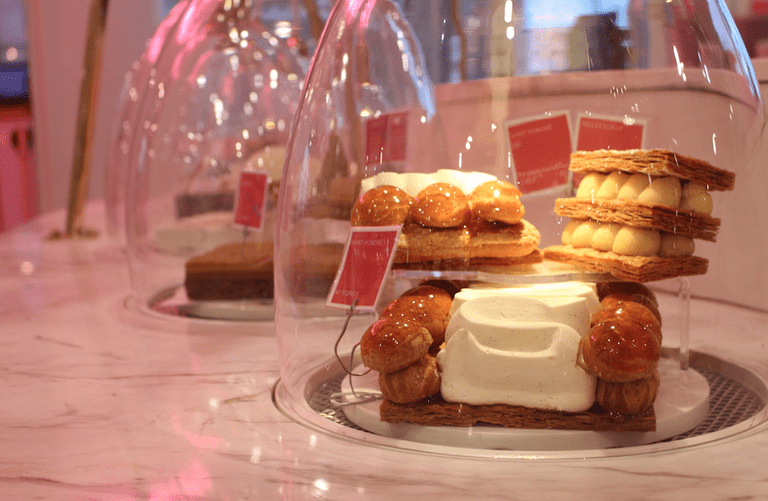 © Marilyn Rios
The first dessert on this list is called Le Saint-Honoré. Named after the French patron saint of bakers and pastry chefs, this cake-like treat will not disappoint. Using puff pastry, caramelized sugar, whipped cream, and pâte àchoux, it is no wonder this treat was named for Saint Honoré. The best place to find this gem in Paris? La Pâtisserie des Rêves, with its many locations throughout the city. 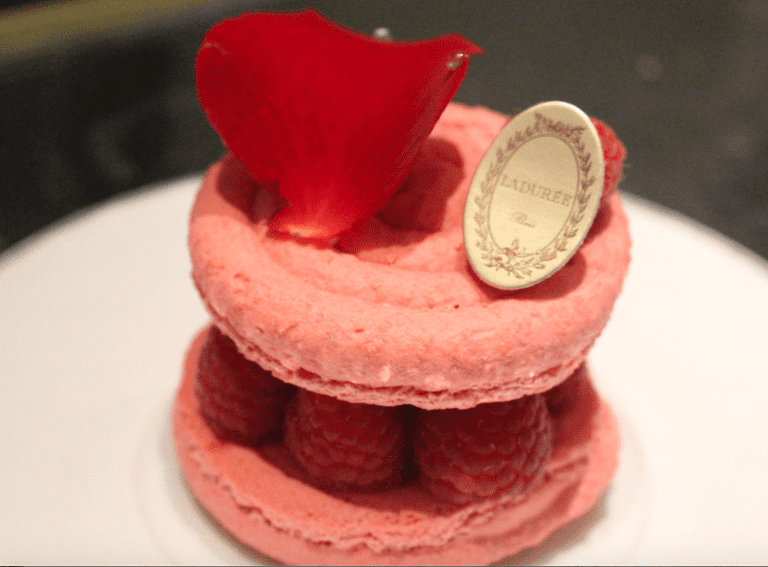 © Marilyn Rios
Ispahan is a dessert that was created by the ‘Picasso of Pâtissiers’ (as he was dubbed by Vogue), Pierre Hermé. Hermé began his baking career at the tender age of 14, and since then, he has had a most impressive career. In addition to being involved in the expansion of the famed salon de thé, Ladurée, he was the youngest person to win France’s Pastry Chef of the Year award, plus he has written cookbooks and also started his own chain of pâtisseries. Ispahan is a melt-in-your-mouth version of the classic macaron and can be found at one of the many locations of Ladurée in Paris. 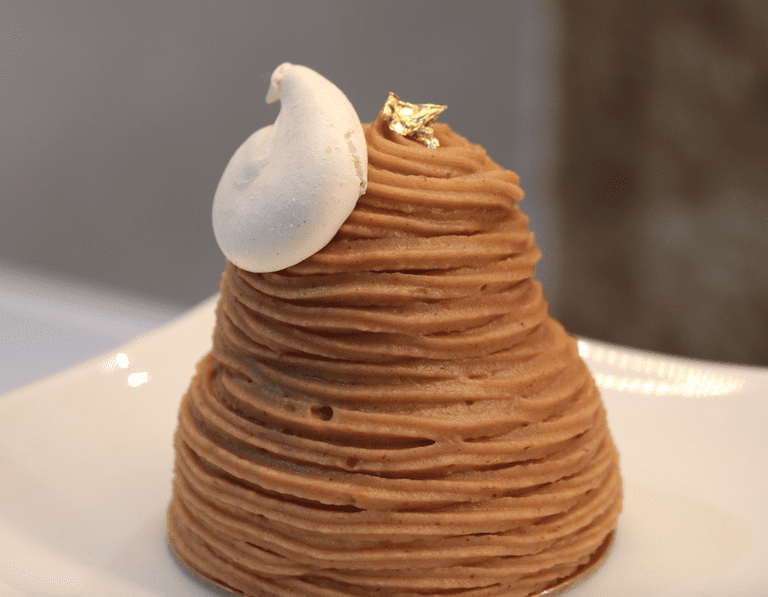 Mont Blanc, Le Mont Du Bonheur, Paris | © Marilyn Rios
A French classic, this dessert can be found in most pâtisseries around the country. Mont Blanc translates to ‘white mountain’ in English, and as you can see, the dessert really does resemble a snow capped mountain. Made using sweetened chestnuts and whipped cream, the Mont Blanc is the perfect way to treat yourself. While this dessert is definitely French, it is appreciated around the world in places like Japan, China, Hungary, and Romania. If you find yourself in Paris, be sure to visit Le Mont Du Bonheur to try a Mont Blanc. 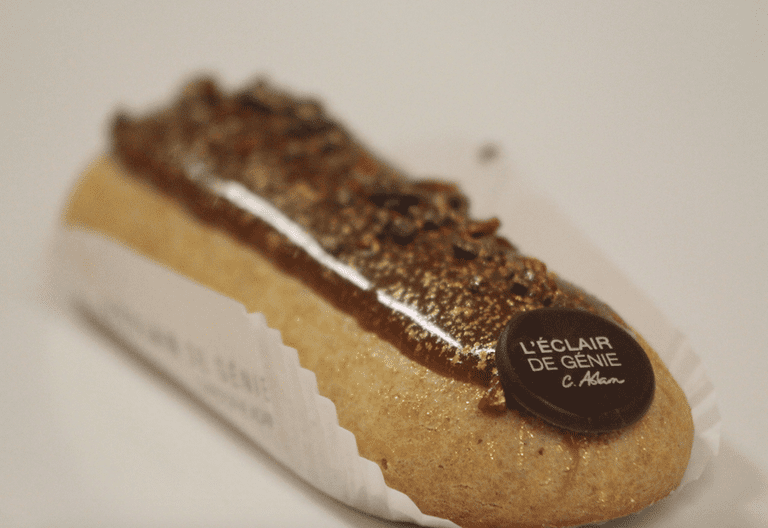 © Marilyn Rios
In French, éclair literally translates into ‘flash of lightning’. This dessert was named as such because éclairs are often eaten so quickly that they are gone in a ‘flash’. A classic éclair is normally filled with vanilla, coffee, or chocolate-flavored custard and then topped with icing. Many pâtisseries in Paris have taken creative license and have come up with numerous different flavor combinations to keep things interesting. The most famous place to find éclairs in Paris is called L’éclair de Genie; they have more that 100 different flavors from which to choose!

Aumônièretranslates into English as ‘beggar’s purse’, and that is exactly what this dessert resembles. Aumônièresare made using crêpes and a yummy filling. It comes in various flavors such as vanilla and strawberry, and the flavor comes from the filling inside the bundled crêpe. A great place to find this dessert in Paris is called Stohrer, the oldest pâtisserie in Paris, which opened its doors in 1730. A pâtisserie that has been around for over 200 years? They must be doing something right.

This dessert may be French, but throughout the years, it has become very well known and can be found around the world. In English, it is called Lemon Tart with Meringue and is especially popular in the UK and in America. There is evidence of this tart’s existence dating back to the 17th century. There are many places to enjoy Tarte au Citron Meringuée, with two suggestions in Paris: La Grande Epicerie, located inside the first department store in the world, Le Bon Marché, and La Loir dans la Théière in Le Marais for a more intimate locale. 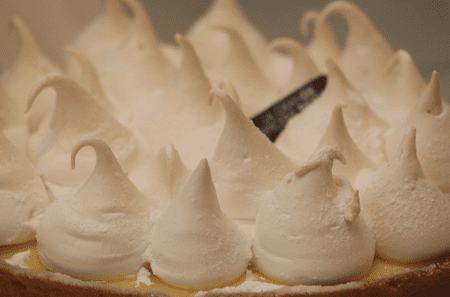 La Fée Bonbon is a dessert that was created by the bakers behind Les Fées Pâtissières, which means ‘the fairy bakers’ in English. This pâtisserie feels more like a concept store when you first enter, with its trendy décor and modern fixtures. La Fée Bonbon is a petit dessert, made using marshmallows, cream, and strawberry jam. This treat may be small, but that doesn’t mean it is any less satisfying! Be sure to check out the other choices at Les Fées Pâtissières, there is plenty from which to choose. 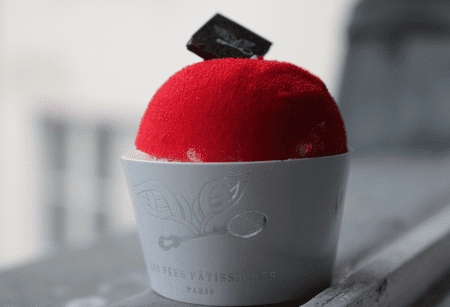 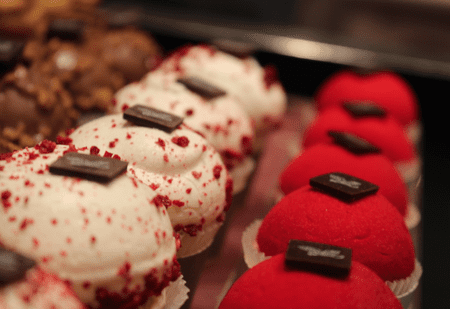 The Diadema: a biscuit crumble made with lemon cream, delicious. The Diadema can be found at Le Café Pouchkine, a Franco-Russian pâtisserie with three different locations in Paris. Le Café Pouchkine had been operating in Moscow since 1999 before they decided to broaden their horizons and open a location in Paris. That was in 2010, and the pâtisseries have been operating successfully ever since. Upon entering any of the locations, one is immediately struck by the elegant and elaborate décor, which is a huge part of the mission of the owners – to pair exceptional desserts with an exceptional locale. 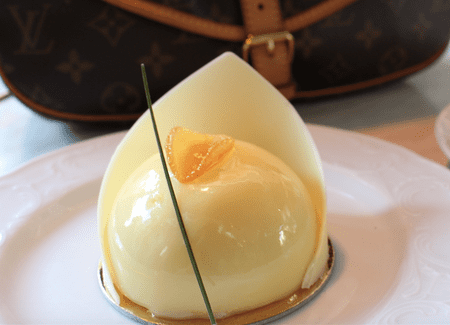 © Marilyn Rios
Give us feedback