The Most Romantic Hotels to Book in Paris 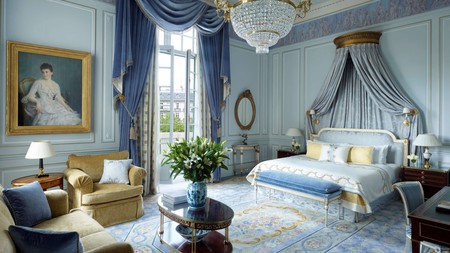 It’s the city for lovers, so hotels that get the heart racing aren’t too hard to find in Paris. That said, we’ve rounded up a clutch of the very best, from charming boutiques to palatial piles – bookable on Culture Trip.

Romance in Paris is everywhere, to be sure. But the city’s hotel scene has a gritty, cutting-edge attitude to art and architecture that is sometimes at odds with its historic facades and movie-set backdrop – so make sure your crashpad is just as seductive as the sights in the City of Lights. Look for the city’s officially rated “palace hotels”: the lavish Haussman mansions that trim the grand old boulevards and velvet-trimmed boutique townhouses with intimate cocktail bars, practically tailored for romantic breaks à deux. Read on to discover our guide to the most romantic hotels France’s capital has to offer. 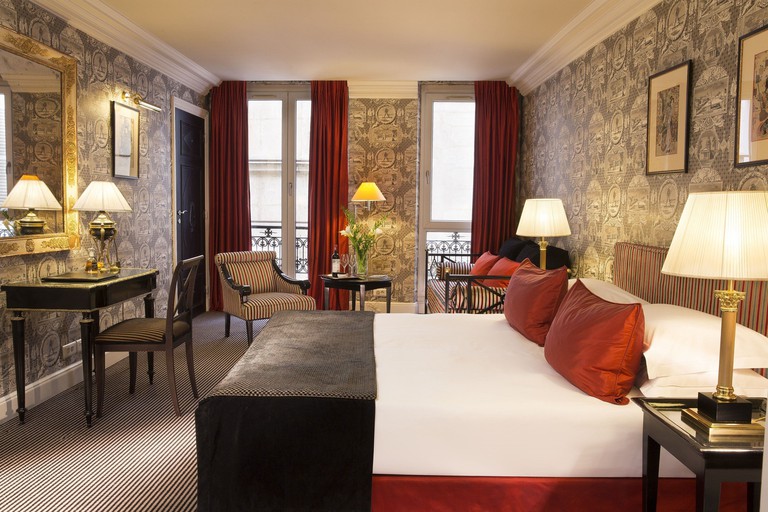 Set on the storied Left Bank, between St-Germain-des-Prés and the Latin Quarter, this classic inn has glossy dark woods, chintzy wallpaper and a convivial bistro serving beef bourguignon at street level. Unlike some of the city’s more expensive stays, it also has a bargain, quality breakfast in true Parisian simplicity: coffee, juice and a pastry from the local Gerard Mulot bakery. Look out for packages that throw in roses, champagne and chocolates. 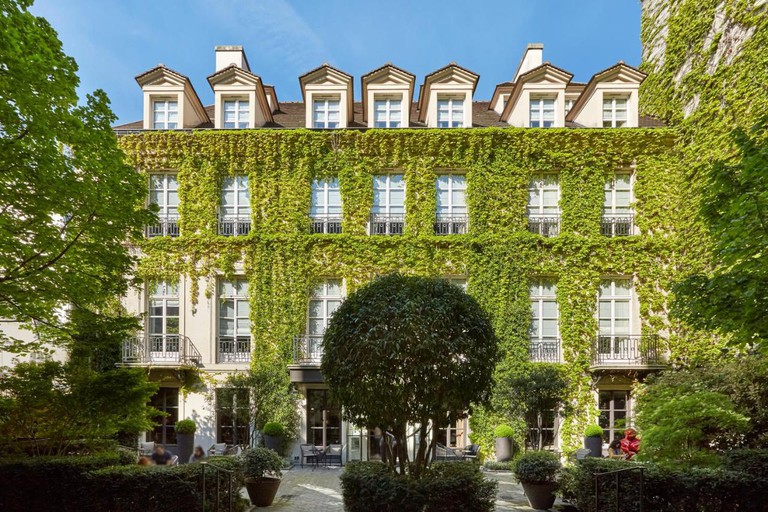 The Marais is one of Paris’s most atmospheric neighbourhoods for couples, who love its village-like patchwork of ivy-draped cafes, falafel-frying delis and cute concept stores. Vines also trail this handsome 17th-century residence, which conceals boldly designed suites with black geometric carpets, plush velvet chairs in jewel tones and brave-but-stylish wallpaper. Most romantic of all is the fairy-light-strung courtyard, where you can feast on truffles, foie gras and millefeuille on a long summer night. 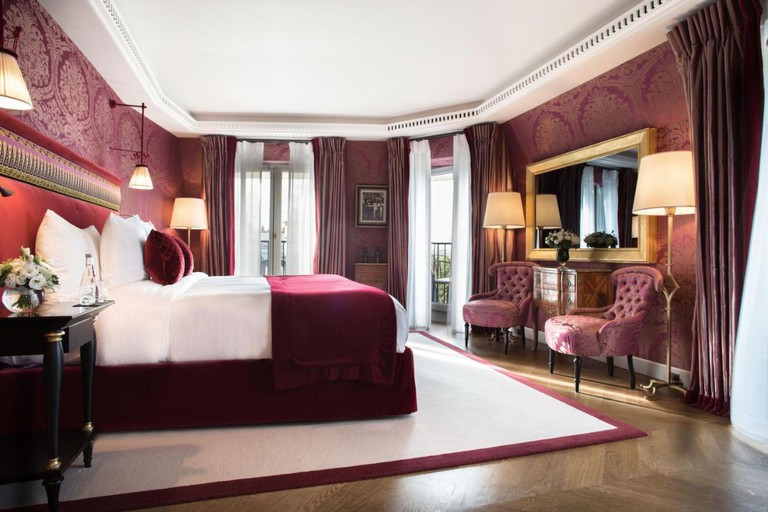 Two-starred Michelin chef? Check. Internationally regarded spa? Check. Richly upholstered, gilt-trimmed decor? Sure. La Reserve is the more modern choice of the high-net-worth crowd, with its ritzy address in the 8th arrondissement, close to the Champs-Elysées, the Louvre and the Palais Garnier opera house. The splashy, show-off feel starts at check-in, where you’re ushered into the ornate Louis XV Salon for a welcome drink; but the sky’s the limit in terms of concierge arrangements, from private-chef-fed boat trips along the Seine to opera-soundtracked walking tours of Montmartre. 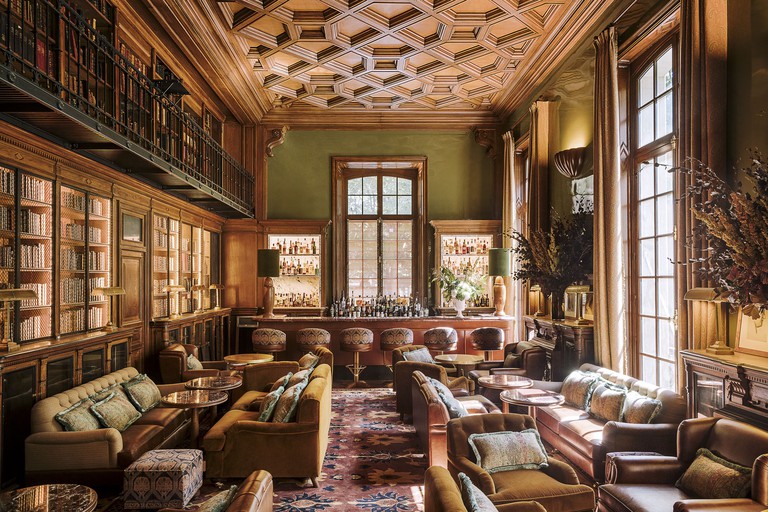 This neoclassical mini-chȃteau, encircled by private gardens, feels like an occasion from the second you pull up outside. Inside is a snuggly library-styled bar and a Michelin-level restaurant serving dainty sea bass tartare and pigeon infused with Earl Grey; rooms are modern and peppy with feature wallpaper and lashings of scarlet. First-timers will love the feel of staying in a prim country palace, while being walking distance from most of the key sights. 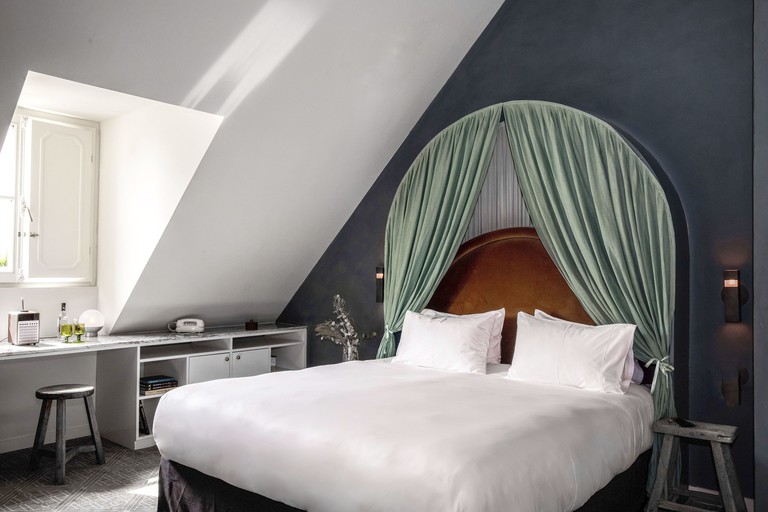 A designer Parisian pad from France’s elite Experimental Group, Grands Boulevards has a modern French aesthetic: think hanging baskets in the conservatory bar and peony-pink velvet headboards draped with linen canopies, rather than the usual intricate period details. Romance comes naturally in the rose-gold-hued cocktail bar, lit by the glow of dozens of luminous globes. Book a balcony room facing the inner courtyard for morning coffees in total peace. 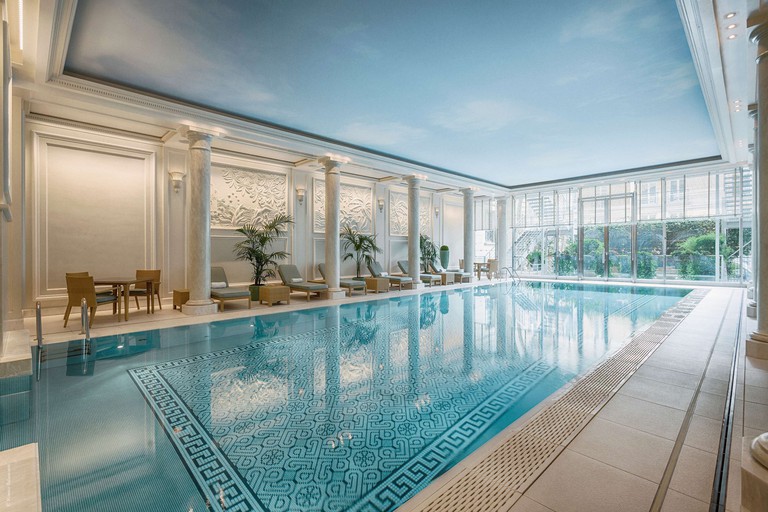 Courtesy of Shangri-La Hotel Paris / Expedia
The brand name is a stamp of international luxury, but there’s also a distinctly Parisian charm at play in this green-canopied mansion in the glam 16th arrondissement. Rooms play it safe with muted cream, duck-egg blue and pale-gold decor – some with killer views of the Eiffel Tower. Treat your amour to an Eiffel-view dinner on the summer terrace and set aside a day to soak in the Chi Spa, with its colonnaded lap pool and immune-system-boosting treatments. 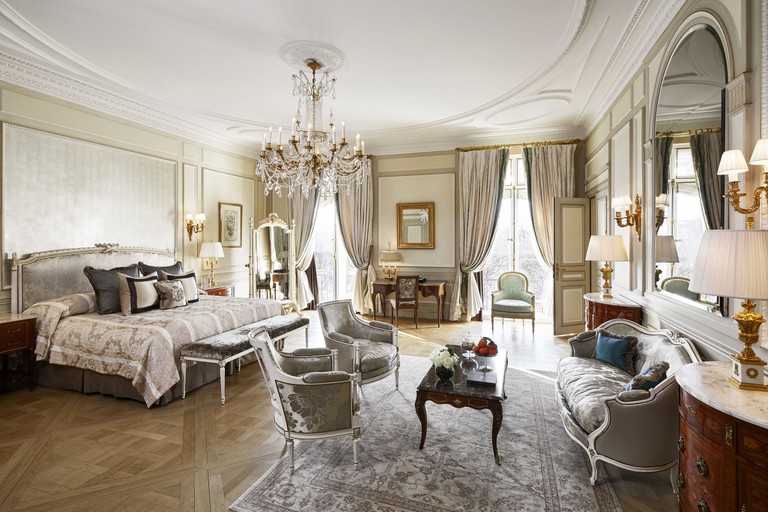 On the sought-after Rue de Rivoli – neighbour to the Louvre, Jardin des Tuileries and the original Chanel boutique – this is palatial, only-in-Paris living. Met by chandeliers, giant-tasselled curtains and priceless art in the lobby, you’ll follow in the footsteps of Salvador Dali, Emile Zola and Andy Warhol as you slink from elegant mirrored salons to glossy classical rooms to gleaming marble bathrooms. Don’t miss a table for two at the Philippe Starck-designed, double-Michelin-starred Alain Ducasse restaurant. 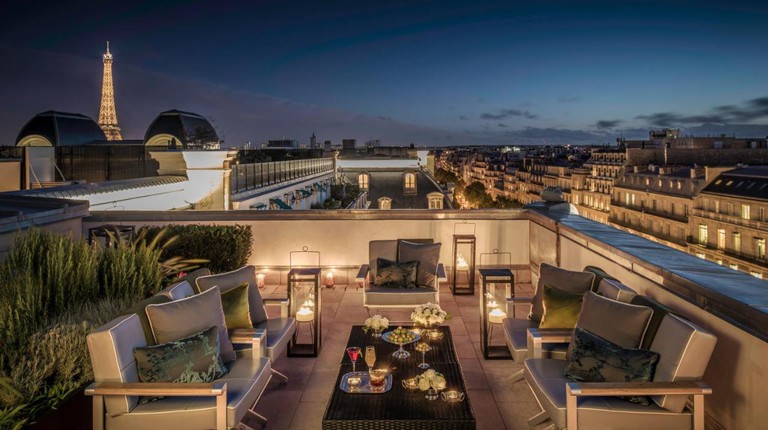 Courtesy of The Peninsula Paris / Booking.com
Peninsula fans are fiercely loyal to the brand’s contemporary take on luxury, with modern art and minimal Asian motifs woven into landmark historic buildings. The Paris outpost has a 200m (656ft) indoor pool that’s pure 21st century, but also a high-ceilinged, palm-trimmed lobby salon for afternoon tea; rooms are strikingly modern with polished dark woods and jet-black sunken bathtubs. Book a cushioned corner on Le Rooftop for the most romantic aperitif in town. 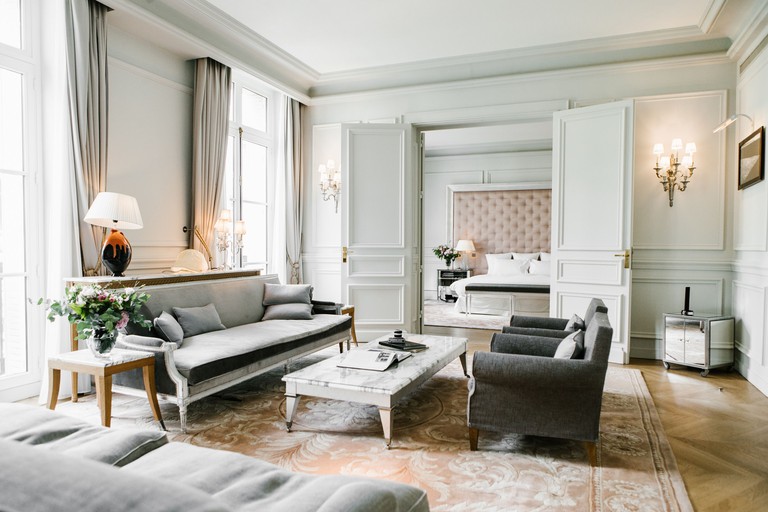 Courtesy of Le Royal Monceau Raffles Paris / Expedia
The scarlet Art Nouveau canopy over the door at Le Royal Monceau gives a hint of the history – and character – inside. This is the artists’ choice palace hotel: Josephine Baker, Ray Charles and Coco Chanel were all fans and it regularly hosts headline-grabbing art exhibitions and installations. Bed down in bright, tasteful rooms decorated ice-white and tan, with zero chintz and plenty of personality. Alternatively, devour designer sushi at the Nobu-helmed Matsuhisa restaurant. 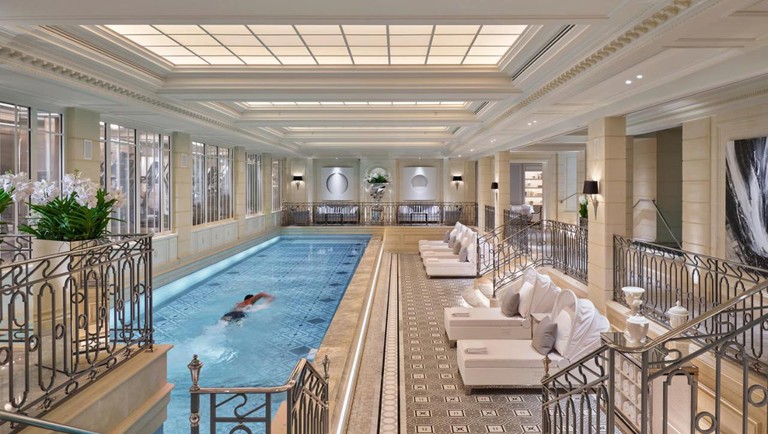 This landmark art-deco building is breathtakingly grand, whether you’re in the fresh-flower-trimmed indoor pool or dining among creamy rococo interiors and full-sized palms at triple-Michelin-starred Le Cinq. Decor may not be bold or edgy, but it’s undeniably lavish – even the “basic” superior rooms drip with teardrop chandeliers and Louis XVI furniture. Splurge on the Eiffel Tower suite for views of the great metallic structure, framed by clean white decor. 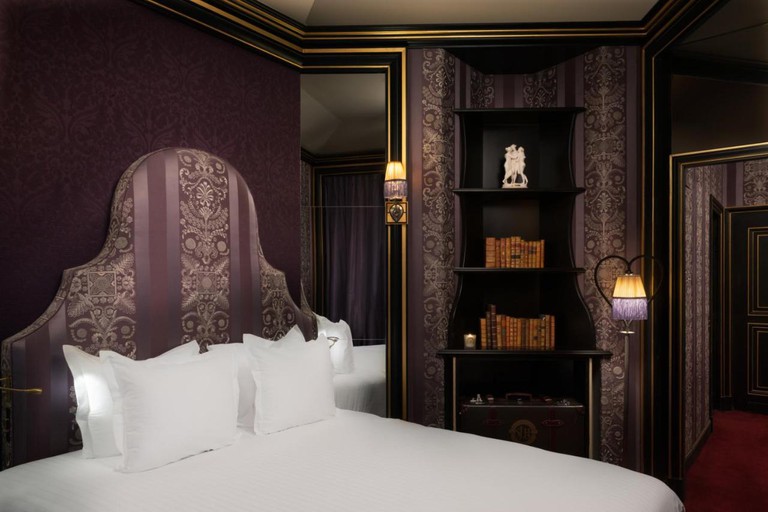 Rich jewel colours and oriental-styled patterns characterise the intimate spaces at this boutique hotel in Paris, from its velvet-splashed reading room bar to striking black and gold rooms. It’s in the Montmartre district of artists and bohemians, loved by francophiles and romantics the world over, a location reflected by the leather-bound books, cognac-infused cocktails and chinoiserie details that add flavour and texture to its never-dull interiors. Book a session in the mini, galaxy-themed spa to fully escape reality.

This is an updated version of an article originally by Jade Cuttle.