The Most Beautiful Monuments in Perè Lachaise Cemetery 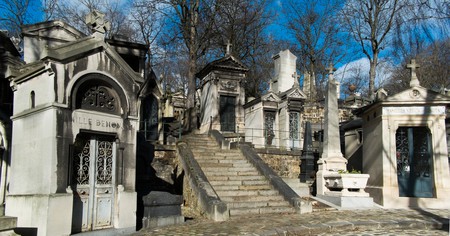 As the famous resting place of many an artist, writer, war veteran and scientist, Père Lachaise cemetery attracts more than 3.5 million visitors each year. This poignant spot is no typical cemetery, and its remarkable monuments tell intriguing stories of the deceased. Take a Culture Trip tour of the most beautiful monuments in Père Lachaise. 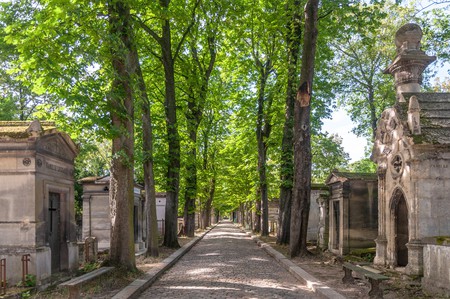 “A kiss may ruin a human life,” wrote Oscar Wilde, Irish poet and playwright. The tomb of Oscar Wilde is one of the most beautiful in the whole Père Lachaise cemetery, and it’s covered with lipstick kisses that show the love and admiration his fans feel for this literary genius. A glass barrier was erected in 2011 to make the monument ‘kiss-proof’ to save it from further damage, but the fine sphinx design remains very much visible. The sculpture is by Jacob Epstein and took around ten months to complete. 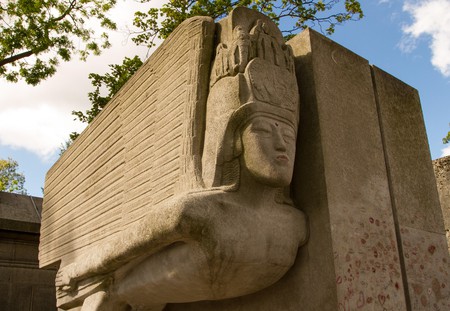 The chapel of Heloise and Abelard

This sepulchral chapel tells the sad love story of the medieval couple Heloise and Abelard. Abelard first met Heloise, a noble young lady, when he was hired to be her teacher. They married in secret, but tragedy struck when their marriage was discovered by the bride’s uncle and Heloise was sent to a nunnery, while Abelard became a monk. They lived the rest of their lives apart, but were reunited when their bodies were brought together to the Père Lachaise. Their tomb is seen as a symbol of eternal love and has become something of a shrine, full of love letters written by modern visitors. 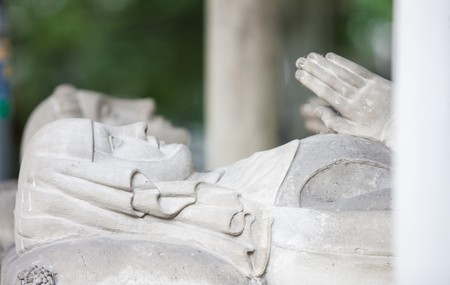 One of the most visited tombs of the cemetery is that of heartthrob Jim Morrison, one of the founders of The Doors. The design of the tomb is modest and understated, but it has a powerful emotional impact. Being one of the most famous rock stars in the music industry has meant that his grave is overflowing with flowers and heartfelt messages of admiration. 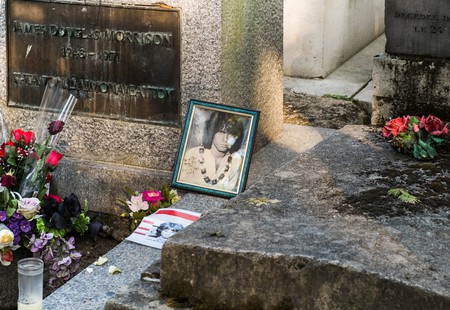 Monuments to the Holocaust’s victims

The power of these monuments, commemorating the Jewish people who suffered and died in the Holocaust, lies in their beautiful simplicity. Some are abstract and minimal, but most of them depict unrecognisable skeletal figures lying down or doing physical labour. Among the adult-size footprints there are smaller ones signifying the younger victims of the Holocaust. 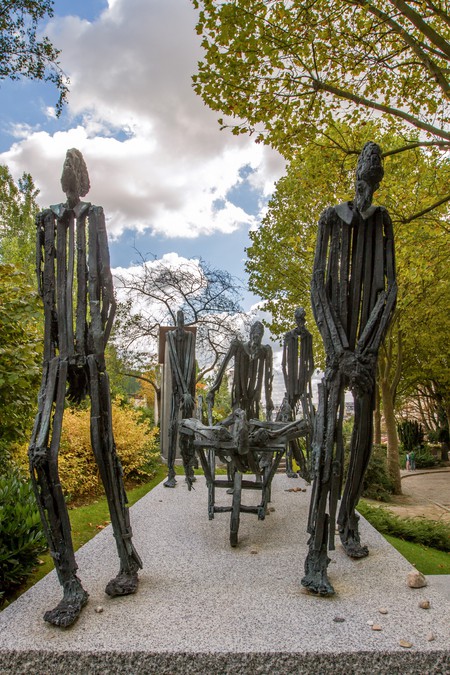 Victor Noir’s tomb is well worth a visit to learn about the tragedy of one of the most promising French journalists of the 19th century. He died at the age of 22, only a few days before his wedding. He was murdered by the royal Pierre Napoléon Bonaparte, who was never charged with his death. What makes this monument so beautiful are the fine artistic details on his unbuttoned trousers and shirt, his bullet wound and his top hat falling away from his right hand. 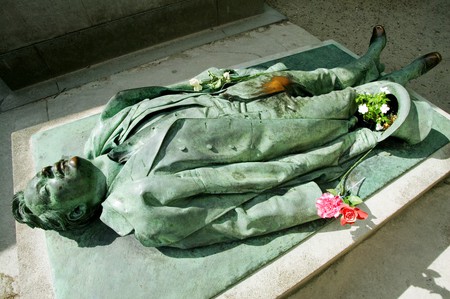 Rodenbach was a Belgian Symbolist author who wrote literature in the 19th century. His heartfelt stories and poems reflect his beautifully romantic soul. He was most famous for his emotive depiction of Bruges, the city featured in his famous short novel Bruges-la-Morte (1892). The love story tells the tale of a man who lost his wife in this quiet city and depicts a very romantic Bruges. 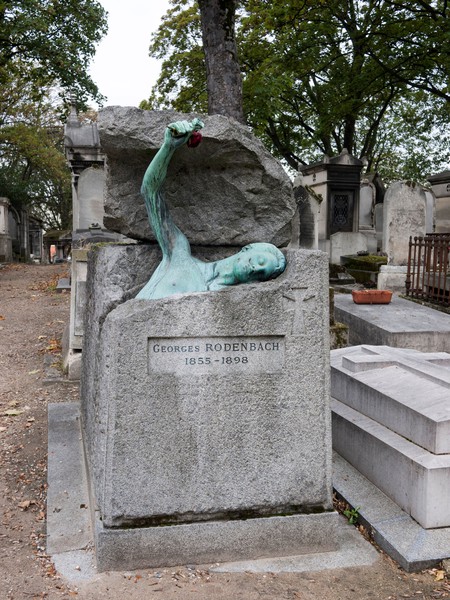 The elaborate statue marking the tomb of Louis-Auguste Blanqui was created by the French sculptor Jules Dalou. A symbol of Christ’s suffering on the cross, the bronze statue portrays a skeletal corpse-like figure covered in plain drapery. Blanqui was a socialist living in France in the 19th century, whose political activities led to him being imprisoned for most of his adult life. His sculpture was a commission paid for by the public.

A trip to the Père Lachaise cemetery would not be complete without admiring the tomb of France’s national chanteuse, Édith Piaf. In her most famous love song, ‘La Vie en Rose’, she wrote, “With you, I see the world through rose-coloured glasses”. The grave is modest, but it’s heartwarming to see how, after a difficult and controversial life, Édith Piaf took her final resting place beside her second husband Théo Sarapo, her father Louis-Alphone Gassion and her daughter Marcelle Dupont. 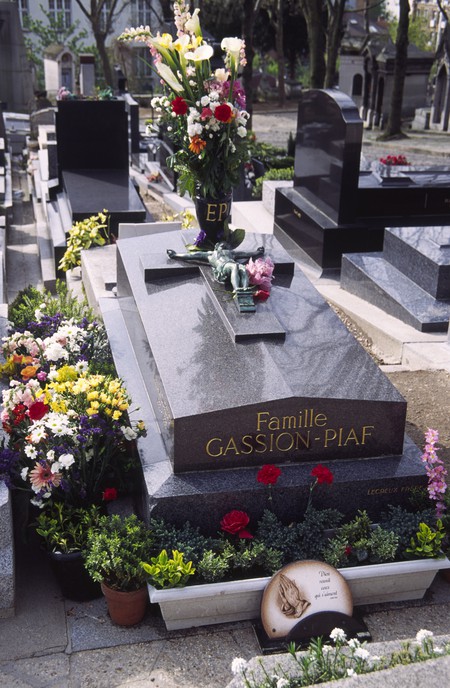 Designed by Paul-Albert Bartholomé in the 19th century, Monument aux Morts is a memorial to unidentified deceased Parisians. This enormous temple-like monument can be seen as a shelter for the unknown dead who do not have graves of their own. Behind the stunning monument lies a communal ossuary, which keeps the remains of these people intact. Located on the bottom part is a female figure protecting a couple and their child, all of whom are in repose. The French inscription under her left arm means, “For those who live in the shadow of darkness, the light shines.” 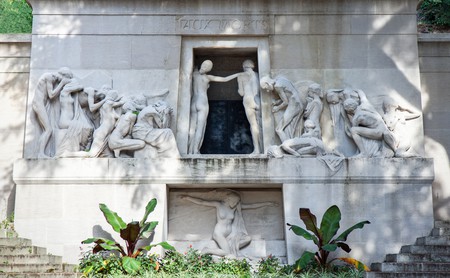