The Most Magical Christmas Markets in Paris 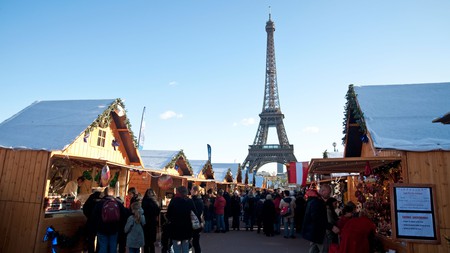 Christmas in Paris, France is a magical time, with crisp winter sunshine illuminating landmarks like Notre-Dame, the Eiffel Tower, the Louvre and many more, against a cold blue sky. The city is obsessed with Christmas markets, too, which sell trinkets and snacks in almost every arrondissement.

Paris is a show-stopper city at any time of year, but come winter it takes on a new, heartwarming persona, as the air becomes filled with the smell of spiced goodies and vin chaud (mulled wine), which drifts across from the many Christmas markets. Whether you’re keen to do some serious Christmas shopping or simply relax with a slab of gingerbread, Paris’s markets will deliver – in typically chic style. And as many are set around or nearby various iconic attractions (including the Eiffel Tower, of course), you can even weave some prime sightseeing into your market-hopping. Here’s our pick of the finest Christmas markets around Paris. 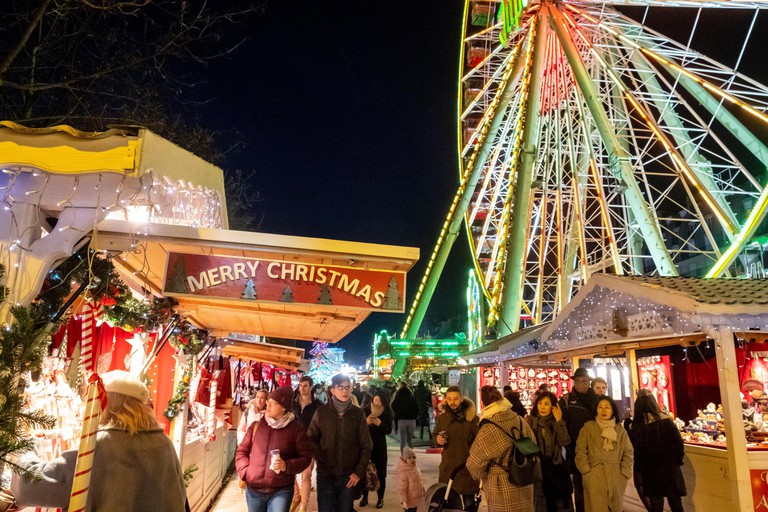 Rising like a festive phoenix from the ashes of the Champs-Elysées Christmas Market, which ended several years ago, La Magie de Noël (“The Magic of Christmas”) sprawls across the vast green space of Tuileries Garden. There are around 100 stalls selling every Christmas knick-knack imaginable, plus enough food to keep Santa, the elves, the reindeer and the whole of the North Pole going all year long. There are roasted chestnuts, mulled wine, an ice rink, a towering Christmas tree and even a full fairground with elaborately decorated carousels. It’s Christmas cranked up to the max. 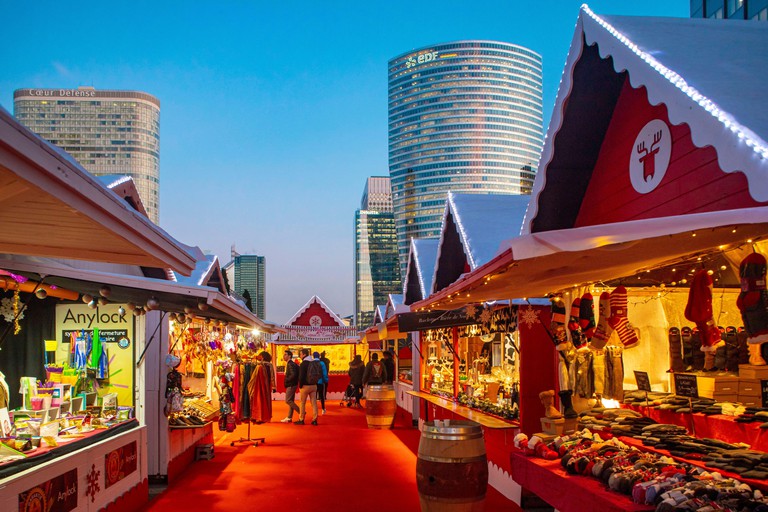 Forget the ghost of Christmas past and propel yourself firmly into the future of Christmas at this market in one of the city’s main business districts. A backdrop of slick skyscrapers and arty, angular office buildings may not be what you expect at a Christmas market, but thanks to some very stylish decorating, it looks and feels remarkably festive. The sheer size (with around 350 chalets, it’s one of Paris’s largest markets) also means there’s an incredible variety of products on offer, from toys to jewellery to decorations to non-Christmassy items, which is probably why it’s so popular with Parisians. There’s also a large ice rink where you can burn off calories from all the food stalls you’ve just trawled through. 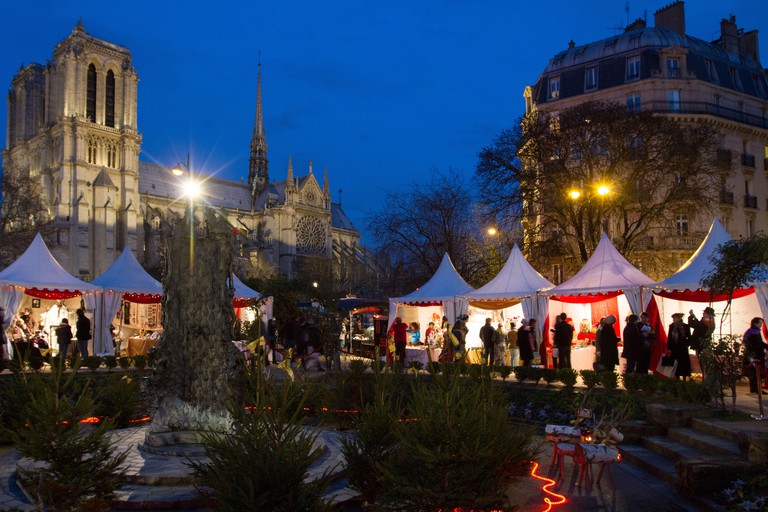 Since it’s set in the shadow of Notre-Dame Cathedral, why not combine a visit to this market with a jaunt around the mighty Gothic masterpiece? For extra sightseeing points you can also take a look at the oldest tree in Paris, which dates back to the 17th century and sits on the edge of Square René Viviani, where the market is held. The market itself is small and pretty, and the many artisan maker stalls mean that it’s a great bet for arts and crafts of all kinds, such as mosaics, stationery and raku (a type of Japanese pottery).

Just because it’s around 500km (310mi) away from Paris, it doesn’t mean you can’t get a taste of the Alsace region in the French capital. Eat and drink your way through a world of traditional Alsace-style products at the oldest Alsatian market outside of the region, including kougelhopf (a bready cake made with yeast), männele (brioche shaped into small figures, eaten in Alsace on 6 December), bretzels (Alsatian pretzels), sauerkraut, pungent mountain cheeses, white wine (seek out the Riesling) and much more besides. 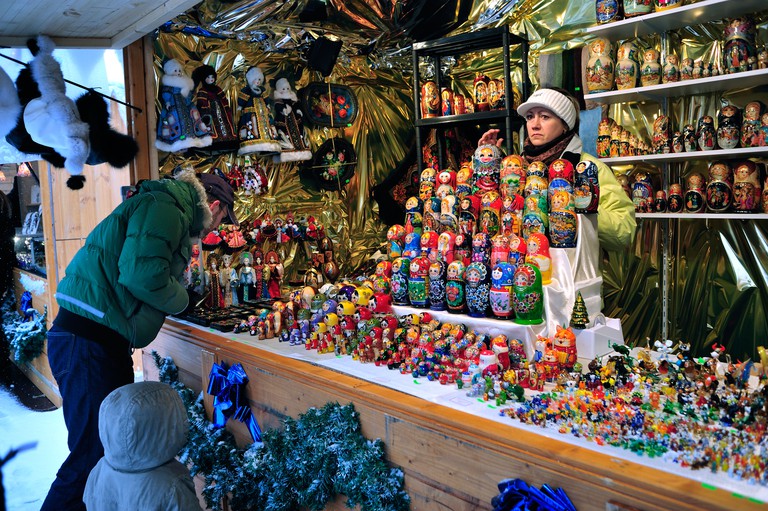 Surely the most coveted spot for a Christmas market in the whole of Paris is the offering at Trocadéro. The market stretches out from the foot of the Eiffel Tower and offers superb views of the French landmark as you browse trinkets spilling from rows of cute wooden chalets. Just don’t get so engrossed in the shopping that you forget to watch the Eiffel Tower’s hourly light show, which takes on a Christmassy spin during festive months. 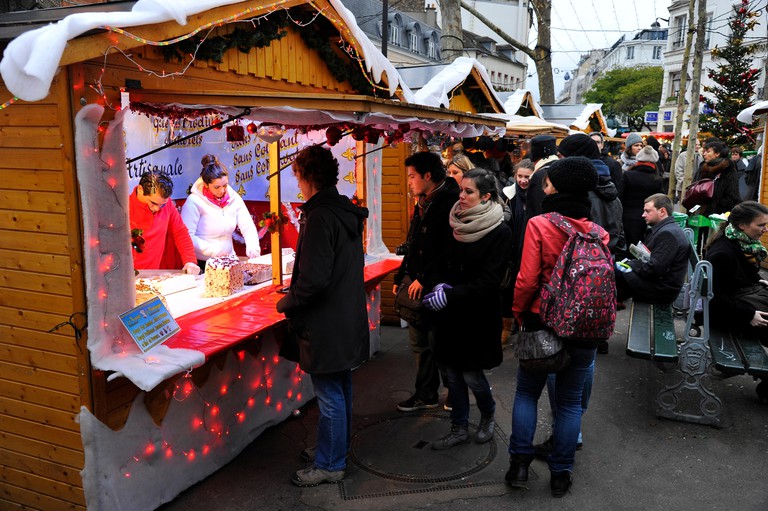 If you’re looking to dodge the Christmas crowds, head to the bohemian Montmartre neighbourhood for this small, intimate market. It’s a far more compact event than most, but still features plenty of craft-based creations and food stalls selling traditional French dishes, such as sautéed mushrooms and raclette. Best of all are the views from the market to Sacré-Cœur, the famous Roman Catholic church overlooking the city, whose gleaming white stone facade will light up even the darkest of wintry nights. It’s best observed with a steaming mug of mulled wine in gloved hands. 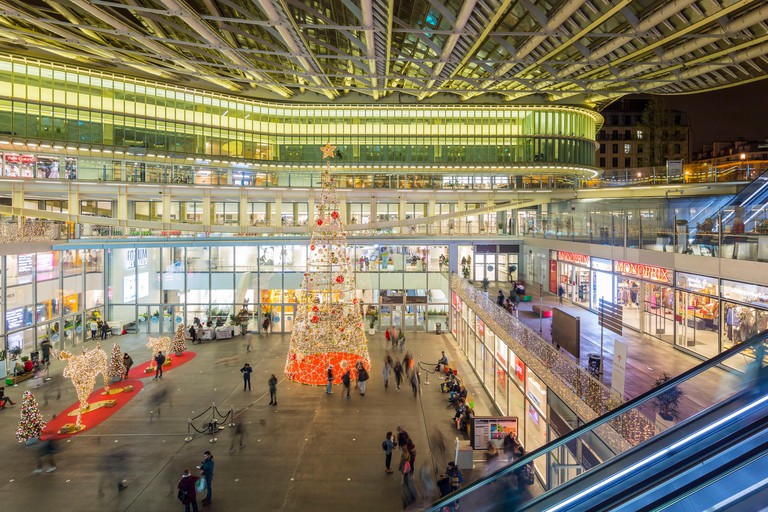 While Paris in the rain has a certain romance, it’s not so fun if you’re ambling around a Christmas market. That won’t be a problem at the Canopée des Halles shopping centre, which hosts this small but well-stocked market, featuring around 20-30 chalets selling mainly food and smaller festive gifts. And if you don’t find what you’re looking for, you’re in a huge shopping centre, so continue your browsing there. The ceiling-length Christmas tree in the middle of the hall is always overflowing with lights and decorations, making for a prime photo opp. 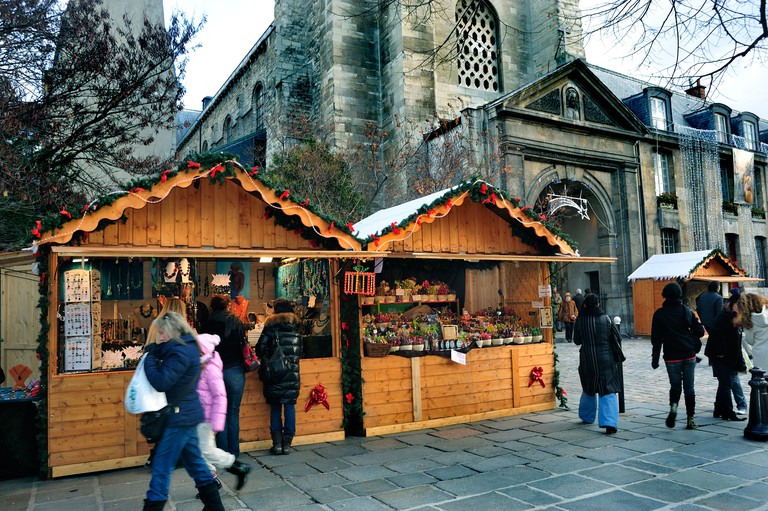 A neighbourhood as arty as Saint-Germain-des-Prés could only ever host a super-stylish market, and this one lives up to expectations. Many of the 20-30 chalets stock high-end gifts and luxury-leaning items, but the main draw for many visitors is the fashion, with items from local and international designers on sale (mirroring the many clothing stores around the area) alongside all the usual festive staples. The food and drink here is also a little fancier, so if you fancy swapping your vin chaud for champagne and artisan chocolate, now’s your chance. 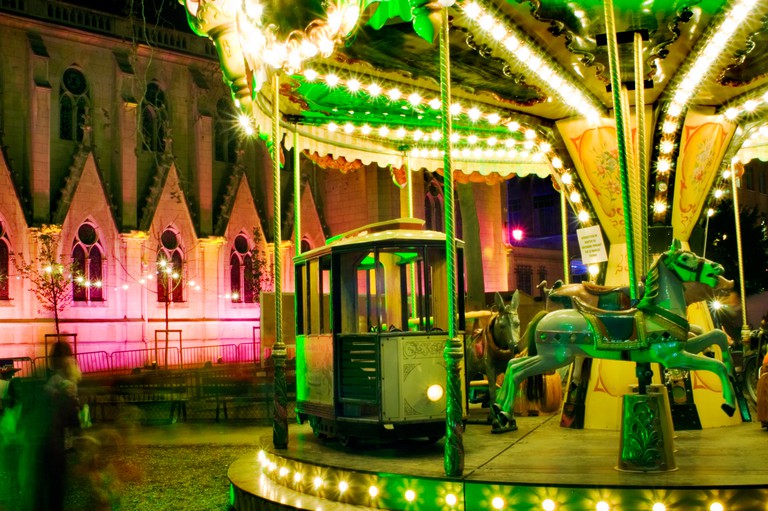 Witness Christmas creativity flourishing at this market, which specialises in local goods produced by various skilled makers and artists. There’s even a flea market, teeming with all kinds of trinkets. Jewellery, hats, bags, ceramics, books, nativity figurines and tree decorations are all surrounded by some of the prettiest street decorations you’re likely to see at a Parisian market. This is also a great one for families thanks to a range of activities for children, which might include anything from magic shows to fairground rides to nativity performances. 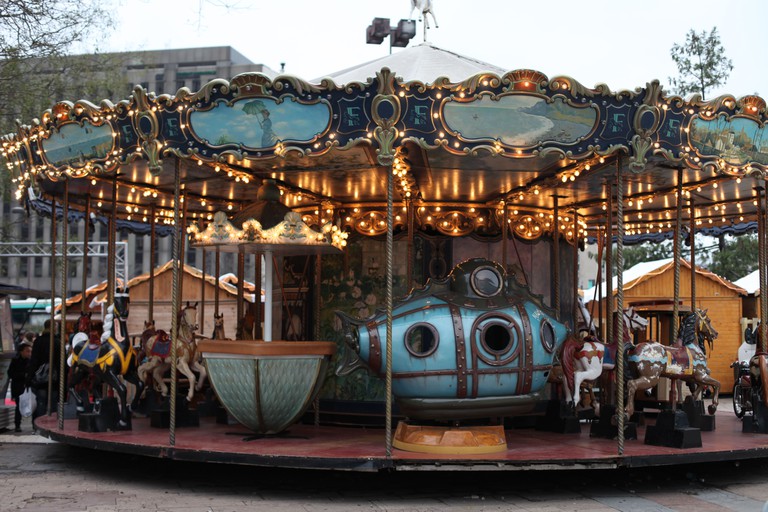 Holding around 40 chalet stalls, this market isn’t in an obvious spot for tourists, meaning it’s a little quieter than most, but popular with locals who live or work nearby. Once you’ve browsed the decorations and munched a crêpe or two, head straight to the Montparnasse Tower (the third tallest building in Paris), which sits at the edge of the market. The observation deck supplies panoramic views out across the city from over 200m (656ft) high, made even better by the fact that the tower is the only tall building in the city centre (apart from the Eiffel Tower – also best seen from the top of the Montparnasse Tower).

This is an updated version of an article originally by Maria Trapiello.