Most Fascinating Buildings By Jean Nouvel

Jean Nouvel, a contemporary French architect with a taste for heights, lights and reflections, is one of the key architectural figures of our century. The architect recently finished one of his masterpieces, the Philharmonie de Paris, opened to the public in January 2015. Here’s a look at the Philharmonie and some other fascinating creations by Nouvel. 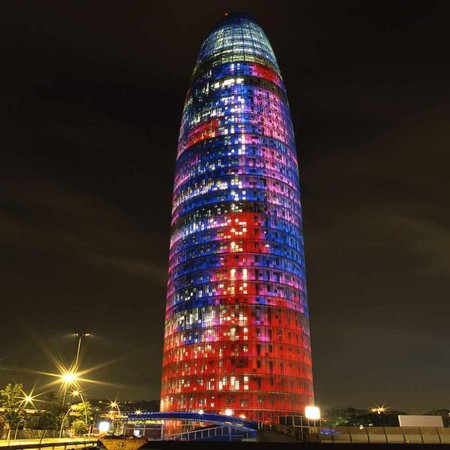 This 38-story skyscraper designed by Nouvel is located in Barcelona, Spain. According to the architect, the tower is intended to recall the shape of a geyser rising into the air. The building also takes some of its inspiration from Montserrat, a multi-peaked mountain near Barcelona, and from one of the most representative symbols of Catalan architecture – the Sagrada Familia church by Antoni Gaudí. The striking structure is built with reinforced concrete and covered with a facade of glass with over 4,500 window openings. The glass plates that cover the entire building are a defining element of Nouvel’s style, since the architect is interested in playing with reflective surfaces and light. A distinctive feature of the tower is its nocturnal illumination. It has 4,500 LED devices that enable the generation of multi-color luminous images on its facade. In addition, the outside of the tower has temperature sensors that regulate the opening and closing of the window blinds, reducing the consumption of energy from air conditioning. Torre Agbar is the third tallest building in the city, after the Arts Hotel and the Mapfre Tower.

The Arab World Institute is an organization founded in Paris in 1980 by 18 Arab countries and France in order to research and spread information about the Arab world, its cultural and spiritual values. The building of the AWI is as important to architecture as the institution is to global culture and politics. The facade on the side of the River Seine follows the curve of the waterway, offering an inviting view from the Sully Bridge. In contrast to the curved surface on the river side, the south-west facade is a straight rectangular glass-clad curtain wall. Visible behind the glass wall, a metallic screen unfolds with moving geometric motifs. The motifs are made up of 240 photo-sensitive motor-controlled apertures, or shutters, which act as a sophisticated brise soleil that automatically opens and closes to control the amount of light and heat entering the building from the outisde. The mechanism fills interior spaces with filtered light – an effect often used in Islamic architecture with its climate-oriented strategies. This is another building that shows that Nouvel manages to create innovative buildings while paying a tribute to cultural elements. 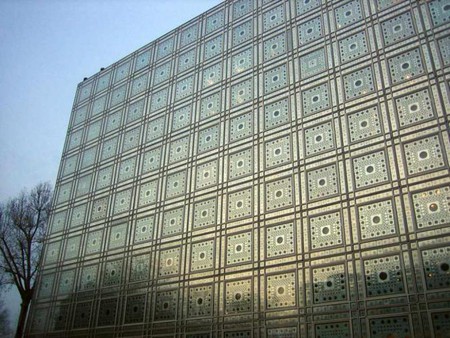 The Doha Tower is located in Doha, Qatar. Shaped similarly to Torre Agbar, the phallic shape which is meant to symbolize the strength and power of the city prevails again – Nouvel described it as a ‘fully assumed virility’. However, unlike the Catalan building, the Doha Tower has a long thin spire or lightning rod on top of the building. The architecture also reflects the local culture, connecting its modern elements with ancient Islamic designs. Islamic screens were designed to shade the building from high temperatures and the unpleasant sand residue found throughout the region. The tower is an expression of the architect’s lifelong interest in both cultural interpretation and technology, and has been praised by the CTBUH for its pursuit of local significance in the face of globalization. The building is designed to host offices for businesses wishing to operate in the diverse business district of West Bay. In 2012, the building received the CTBUH Skyscraper Award for the Best Tall Building Worldwide. 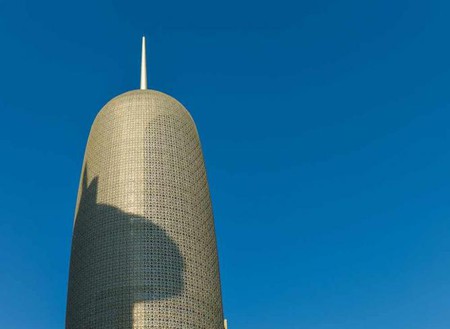 The Philharmonie de Paris is a cultural institution in Paris, France, which offers different spaces all dedicated to music. The central part of the institution, the symphonic concert hall, was designed by Nouvel and opened to the public in January 2015. This is a mineral building with unconventional lines, rising up like a hill within the Parc de la Villette. The aluminium swirls wrapped around the concert hall contrast with the rest of its matte exterior. The exterior facade covering is composed of 340,000 birds made in four shades – ranging from light grey to black – that are intended to symbolize a grand take-off. The rooftop of the concert hall will soon be open to the public offering views of the surrounding areas from the height of 37 meters. Both the exterior and the interior of the building are innovative. Inside, the auditorium contains 2400 seats which are distributed between the parterre, behind the stage and on floating balconies around the central stage. The hall’s enveloping configuration is designed to immerse the spectators in the music: its walls are composed of moving panels designed to redirect the sound in multiple directions. Nouvel’s building clearly serves its purpose, paying homage to the musical arts. 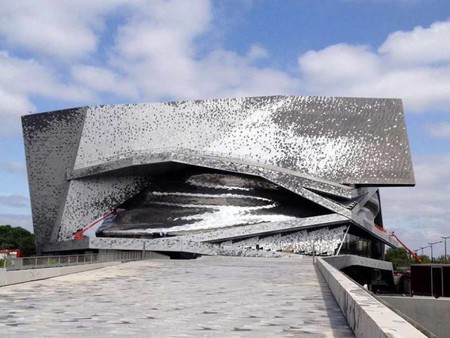 Built in 1998, LCCG is another magnificent building by Nouvel located in Lucerne, Switzerland. This is a multi-functional building which hosts a concert hall that is appreciated for its excellent acoustics. The center is built on Lake Lucerne Vierwaldstättersee and its construction complements the lake with its horizontal shapes and water-like fluidity. The construction of the center was a major challenge because of the overhang that reaches 45 meters on the diagonal level, with a height of 21 meters. Faced with the impossibility of building the center on water, Nouvel decided to bring the lake closer to the building by creating two low-depth channels that operate within the complex. The water was channeled into the three different parts of the building at the same level as the Plaza Europa. This building, once again, shows the architect’s ability to connect his innovative designs to the more traditional elements of landscape and culture that surround his buildings. 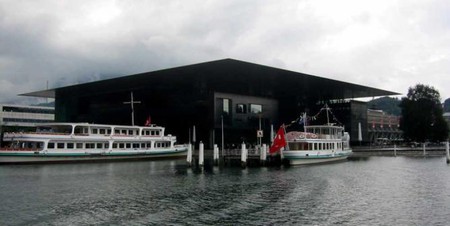 Lucerne Culture and Congress Centre | © Andreas Praefcke/WikiCommons
Give us feedback