The Most Beautiful Squares in Paris 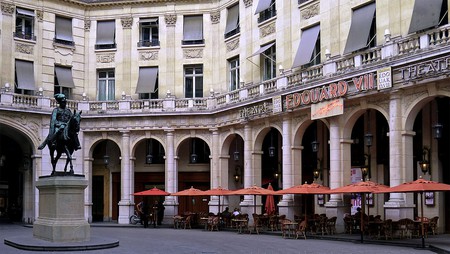 City squares, where you can relax with a plate of cheese or glass of wine and watch the world go by, are a sometimes large, sometimes small, always stunning part of what makes France so great. You probably already know the likes of Place de la Concorde and Place de la Bastille so here are 10 lesser-known squares where you can chill out like a local.

Named after the 19th century French novelist and poet Emile Goudeau, this square is typical of many in Montmartre: tree-covered, centered around a Wallace fountain, and with a special place in the neighborhood’s literary and artistic history. Goudeau himself founded the Hydropathes literary club and the Bateau-Lavoir, the hub for artists and writers in the 19th and 20th centuries, was located here before it burned down in the 1970s. For dinner with a view over the city’s iconic rooftops, visit Le Relais de la Butte. 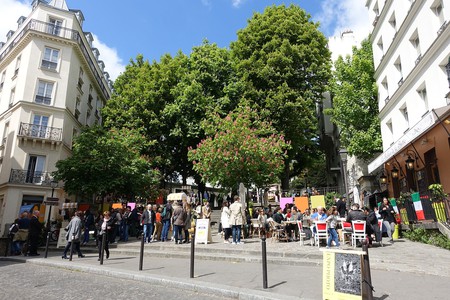 This Parisian square has a distinctly English feel to it. This is mainly because of the unmissable figure in the middle of King Edward VII, nicknamed the Peacemaker, who worked to strengthen Franco-British relations during his brief reign at the beginning of the 20th century. The cafés and elegant shops around square are typical of the Madeleine neighborhood, but the square is best known for the Théâtre Edouard VII. Even if you aren’t going to the theatre, you can still go for dinner at its Café Guitry or sip cocktails at the Bar Anglais, which is classed as a historical monument.

This triangular square is located on Ile de la Cité between the Pont Neuf and the Palais de Justice. When it was built by King Henri IV and named after his son, the properties were bought by the merchant class and not the aristocracy like in nearby neighborhoods. Advances in trades like photography and watchmaking were made here (Marie-Antoinette bought her first Piguet watch in the square). Today, chestnut trees line the bookshops, restaurants, and cafés, making it one of the hidden treasures in the city and the perfect respite from the hustle and bustle of central Paris. 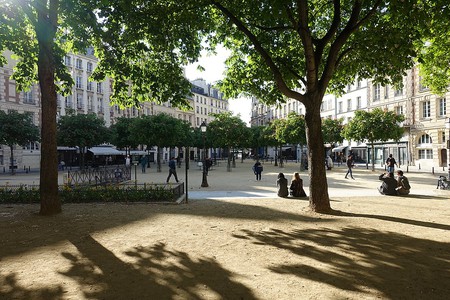 If you’re looking for a momentary break from a stroll around the Marais, the Place du Marché Sainte-Catherine, is the perfect place. Chinese white mulberry trees surround the square whose name comes from the old market which opened in the 18th century on the spot of a former convent. There are many bars and restaurants to choose from, like Chez Joséphine which serves traditional French cuisine. 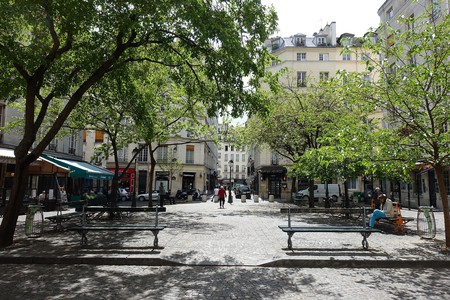 This neighborhood in the 5th arrondissement was at the literary and artistic heart of the city in the early 20th century, with frequent visitors including Ernest Hemingway. The open-air dance halls and cabaret clubs which used to occupy this square have now evolved into shops and delightful restaurants and bars. Try Café Delmas for a coffee, happy hour cocktail, or even a Sunday brunch. Note that renovation works are currently taking place until the end of summer 2017. 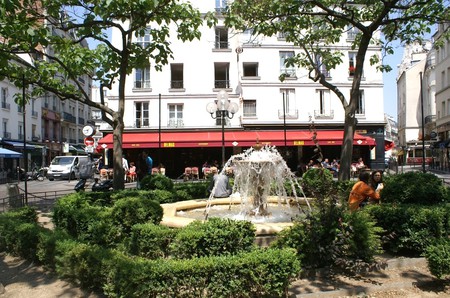 The relatively little-known square of Place Gustave Toudouze is a stone’s throw from the Moulin Rouge and other sites along Boulevard Clichy, and right in the heart of the trendy South Pigalle (SoPi) neighborhood. The No Stress Café bar is perhaps an indication of the mood this type of square is going for. It is the perfect place for a pit stop when exploring this cool neighborhood. If you’re out for the night, try the nearby La Buvette or Les Affranchis for a guaranteed excellent meal. 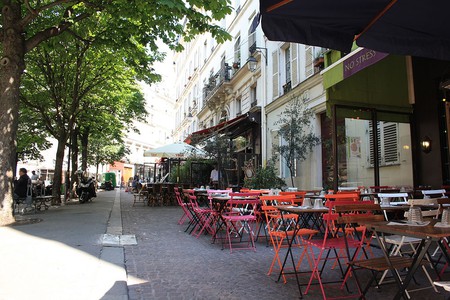 Dalida, the Egypt-born Italian-French singer, was a longtime resident of Montmartre, and in 1997 – on the 10th anniversary of her death – the city opened this square in her honor. The main attraction on the square is the life-size bronze bust of Dalida who is looking up at the Basilique du Sacré-Coeur. The metal breasts on the bus are well-polished, which is apparently because of a superstition that says that rubbing them brings you good luck. 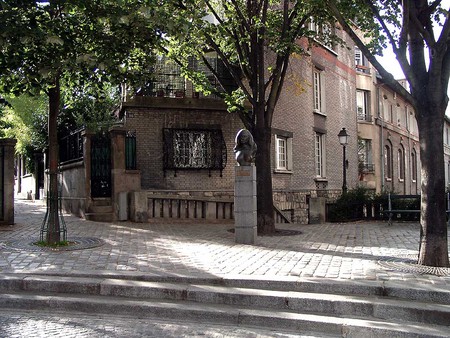 Given its location near Opéra, the Louvre and the chic St. Honoré neighborhood, it is not surprising that this is one of the city’s busiest squares. The beautiful fountains in the center of the square look on to the Comédie-Française, one of the few state theaters in France and the oldest active theater in the world. Try the Brasserie du Louvre, or one of the many restaurants in the Palais-Royal gardens just next door, like the Restaurant du Palais-Royal for a fine-dining experience. 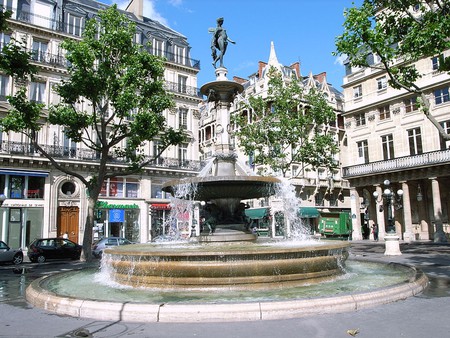 Chestnut trees with pink flowers surround the Place Saint-Sulpice, built in 1754 as a quiet garden in the heart of the Latin Quarter. The square is home to the church of Saint-Sulpice as well as the town hall of the 6th arrondissement. Stop in at the long-established Café de la Mairie for a quick coffee, or longer Aperol, depending on the time of day. 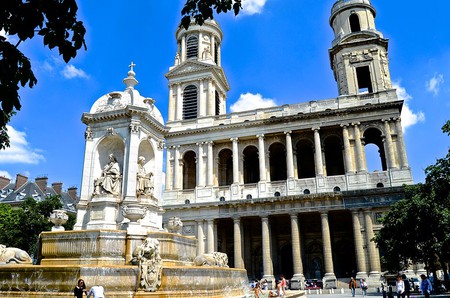 The sole reason this square was created was to provide an elegant backdrop for a new statue of King Louis XIV in the 17th century. Fortunately, or unfortunately, depending on how you see it, this was melted down during the Revolution. Place des Victoires is at the confluence of six long streets and straddles the border between the 1st and 2nd arrondissements. If you’re looking for a chic day out, shop (or window shop) in some of the clothing and furniture boutiques around the square, and head to the Galerie Vivienne for a glass of wine and sharing platter at Legrand Filles et Fils. 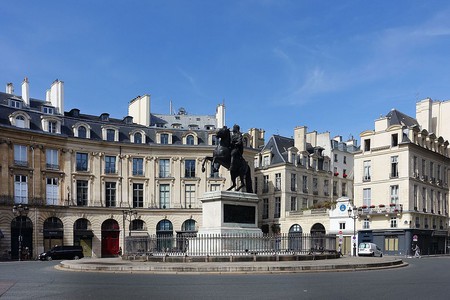