The History Of Place De La Concorde In 1 Minute 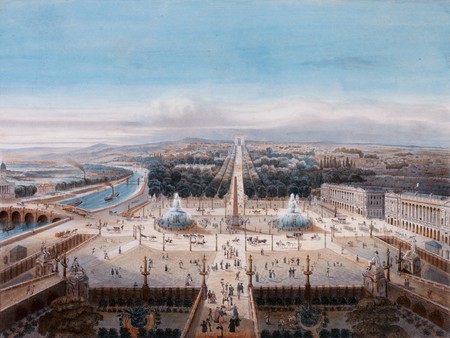 Place de la Concorde is located between the Champs Elysées and the Tuileries Gardens, and because of its elaborate history, it is one of Paris’ most evocative public spaces. This square is the largest in Paris, and the country’s second largest after Place de Quinconces in Bordeaux.

Built between 1757 and 1779, the square was originally given the name ‘Place de Louis XV’. In its center was a large equestrian statue depicting France’s current Monarch, King Louis XV. During the French Revolution, the square underwent dramatic changes. In 1792, the statue was destroyed and and the square was renamed, Place de la Revolution (Revolution Square). During the Revolution, the square became the selected site for the guillotine and soon turned into a bloodstained stage as the revolution descended into anarchy. The revolutionary government executed more than 1200 people in Place de la Révolution, surrounded by cheering crowds – some of the most famous victims were King Louis XVI, his wife, Marie Antoinette, and leader of the revolution, Maximilien Robespierre.

With the Reign of Terror coming to its end in 1795, the square was officially renamed Place de la Concorde, which is a reference to peace and harmony. 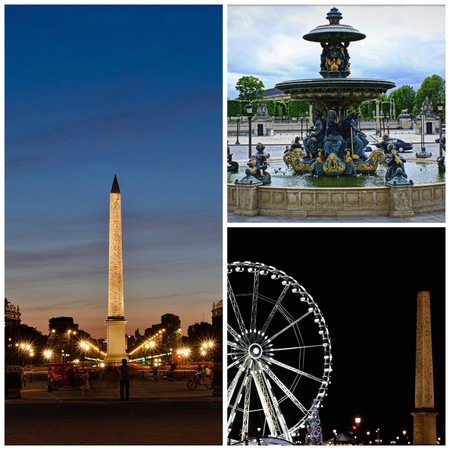 In the decades following the chaos of the French Revolution, the square acquired its current appearance between 1836 and 1840, when the imposing 3,300-year-old Egyptian obelisk was placed in its center, by orders of King Louis Philippe, in 1836. The obelisk was a gift sent from the Egyptian government to France in 1829. Decorated with hieroglyphics that allude to the reign of pharaoh, Ramesses II, the obelisk had once marked the entrance to the Luxor Temple. In order to immortalize the intrepid and complicated task of transporting the obelisk – due to the technical limitations back in the day – on the pedestal are carved diagrams explaining the machinery that had to be used for the transportation from Egypt to France. Since the obelisk was missing its original cap – believed to be stolen in the 6th century BC – the French government added a gold pyramid cap to the top of the obelisk in 1998.

Also in the 1830s, the square was adorned with two elegant fountains that were designed by Jacques Hittorff, a student at the famous, École des Beaux-Arts. Hittorff had served as the official architect of Festivals and Ceremonies for the King, and had spent two years studying the architecture and fountains of Italy. The two fountains were therefore, inspired by the Italian, neoclassical style.

The north fountain is dedicated to the rivers of France, with allegorical figures representing the Rhone and the Rhine. It honors the art of harvesting flowers and fruits, as well as the brilliance of navigation, and agriculture. The south fountain, closer to the Seine, represents the Atlantic and the Mediterranean oceans. It honors the art of harvesting coral and fish, and alludes to astronomy and commerce.

Today, Place de la Concorde is the the finish line for the annual Tour de France bicycle race, the winner of which gets to stay in the illustrious Hotel Crillon that sits on the north side of the square.