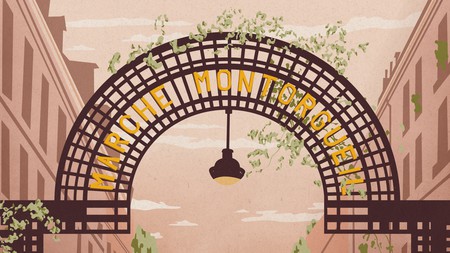 In the centre of Paris, one street’s dedication to good food and drink has stood the test of time. History might have claimed a facade or two on Rue Montorgueil, but the spirit of the place endures. Take a walk along its 350 metres of foodie heaven and learn of the literary greats who came and had a grand old time before you.

For centuries, Parisians have been visiting Rue Montorgueil to shop for everything from cheese, bread and wine to pastries, oysters and more of the finer things in life. The shopfronts may have changed – some more than others – but glimpses of the original street remain, not least in the exposed wood of the buildings and the worn cobbles underfoot.

If you’ve never heard of Rue Montorgueil, its neighbour Les Halles, which sits at the street’s southern end, might ring a bell. King Louis VI established the earliest incarnation of this marketplace, an open-air affair where merchants came to trade grain, in 1137. This is long gone, of course, as are the 19th-century wrought-iron pavilions that stood in its place; in 1969, city authorities relocated the food hall to the suburb of Rungis and installed an underground shopping centre in its place. For many, this ripped the soul out of one of Paris’s most central districts; where once Parisians of all stripes had come to shop and eat and drink at all hours of the day and night, people tended to avoid. In 2016, a €1 billion redevelopment project seeking to reverse the area’s fortunes – the city’s largest infrastructure project for decades – was unveiled to mixed reviews, with one journalist branding it a “custard-coloured flop”.

In any event, Rue Montorgueil has fared rather better. While history has erased almost every trace of many of the establishments that helped make it famous, among Parisians and visitors in the know, others have survived pretty much intact. All that remains of Au Croissant, at No. 9, a cabaret once frequented by none other than 18th-century Venetian Lothario Giacomo Casanova, is a small crescent moon above the door’s moulding; on the other hand, L’Escargot Montorgueil has been serving its escargot bourguignon (snails cooked in butter, parsley and garlic) at No. 38 undisturbed since 1832. Admirers of its signature dish can count Marcel Proust and Sarah Bernhardt for company.

Despite this illustrious endorsement, the street’s most famous culinary establishment is a little bit further along, at No. 51. Pastry chef to King Louis XV, Nicolas Stohrer came to France from his native Poland with Marie Leszczyńska, a Polish princess and the future French queen consort, and opened his eponymous store in 1730. Among the sweet delights it has been trading on for approaching three hundred years, none are more feted than the baba au rhum, a boozy fruit cake served chilled with fresh chantilly and seasonal berries that Stohrer is said to have invented himself. The shop is small but ornate, with shimmering chandeliers and original murals by Paul Baudry, who created the frescoes of the Palais Garnier, Paris’s grand, 19th-century opera house.

Describing Le Compas d’Or in 1873’s Le Ventre de Paris (The Belly of Paris), Émile Zola writes: “It was like a taste of the countryside right in Paris.” The decor of Le Compas, the brasserie that now occupies the terrace and ground floor of 62 Rue Montorgueil, is more industrial than rural chic, with its filament bulbs and studded-leather bar stools, but its menu is equally as appealing. For Honoré de Balzac, the taste of Paris was the taste of Rue Montorgueil, specifically of Au Rocher de Cancale, at No. 78. “To find Paris again!” he writes, in Honorine (1843). “Do you know what that means, O Parisians? It is to find – not indeed the cookery of the Rocher de Cancale as Borel elaborates it for those who can appreciate it, for that exists only in the Rue Montorgueil – but a meal which reminds you of it!” Indeed. The restaurant, established in 1804 and famed for its oysters, has a powder-blue and gold-detailed facade that’s hard to miss. Alexandre Dumas, the author of The Count of Monte Cristo (1844-46) and The Three Musketeers (1844), was another literary patron.

While the first À la Mère de Famille, founded in 1761, is a 15-minute walk away, at 35 Rue du Faubourg Montmartre, the chocolate shop’s outpost at 82 Rue Montorgueil is still worth a visit. The antique typeface above and around the door harks back to a simpler, or at least less commercialised, time, and, inside, Paris’s oldest confectioner’s keeps as close as possible to its original recipes.

Just before the Rue Montorgueil melts into Rue des Petits Carreaux at the intersection with Rue Saint-Saveur, there’s La Fermette, a fromagerie that local food writer David Lebovitz assures will become “your favourite cheese shop in the whole wide world”. It’s not a particularly historic address, No. 86, and its endorsements might not have come from the literary greats of the age, but it does speak to an immortal truth about Rue Montorgueil: this is a place to come and wander, shop to shop, restaurant to bar, to eat and drink and talk and remember all the good things about days and nights in Paris.