The History Of Les Docks In 1 Minute

The Cité de la Mode et du Design, or ‘Les Docks’ for short, is the nucleus of an urban redevelopment project akin to the Docklands in London or Riverside South in New York. The epic cultural center occupies a converted industrial unit on the left bank of the Seine between the Gare d’Austerlitz and the Gare de Lyon and is a symbol of 21st-century Parisian living.

In 1907, the Port autonome de Paris (PAP) commissioned Georges Morin-Goustiaux to construct a set of quayside warehouses. Eschewing the trend for hiding industrial buildings behind a decorative façade, he chose to leave his reinforced concrete structures (some of the first in the capital) as they stood. His bold architectural decision was admonished and admired in equal measures. 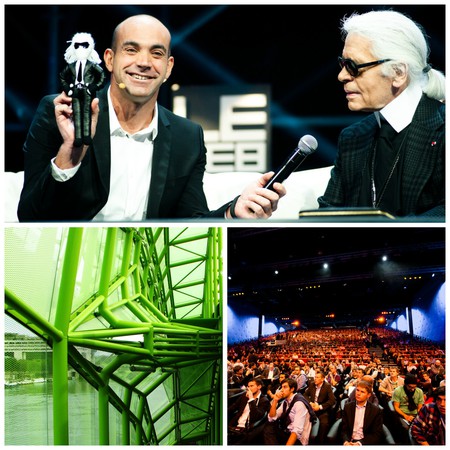 Almost a century later, in 2004, the City of Paris acquired the building from the PAP with the aim of transforming the 12,000-square-meter space, which had for 20 years been a carpet warehouse and examination center, into an architectural feature ‘that would define Paris in the 21st century’ and showcase a creative, urban, and contemporary lifestyle.

Jakob + MacFarlane, a Parisian firm headed by Frenchman Dominique Jakob and New Zealander Brendan MacFarlane, won the tender process with their plan to preserve the original structure while creating a ‘non-standard architectural object.’ At the same time as exposing the building’s skeleton, the architects engineered a new skin for its Seine-facing side, inspired by the perpetual motion of the river itself. The ‘Plug-Over’ was created by digitally modeling a distorted version of the pre-existing framework. The tubular metal structure was covered with a stenciled glass sheath and transplanted onto the building. The roof terrace, which is the largest in Paris, is a mixture of planting and wooden matting and also features a lighting design by artist Yann Kersalé.

Renovations began in 2007, and Les Docks was officially opened to the public in the spring of 2012. As with Morin-Goustiaux’s design, the building created a storm of mixed reactions. Some claimed it ‘re-energize[d] historic Paris’ and others, in mock bemusement, said it was ‘something that must be called architecture.’

📅 Open every day, 10:00am to midnight. (Check websites for night club opening times.)