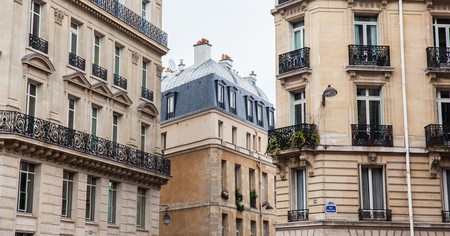 Nadia Barrientos (who leads walking tours in Paris) is fascinated by the invisible, by what escapes the eager clutches of historical documentation.

Unlike the historical monuments that continue to assert their presence after centuries, the oral dimension of history has for the large part been forgotten. This is due to its fleeting nature of being spoken, rather than constructed in stone.

However, this elusiveness is exactly what enthrals Barrientos, especially when it comes to the forgotten history behind street names in Paris. 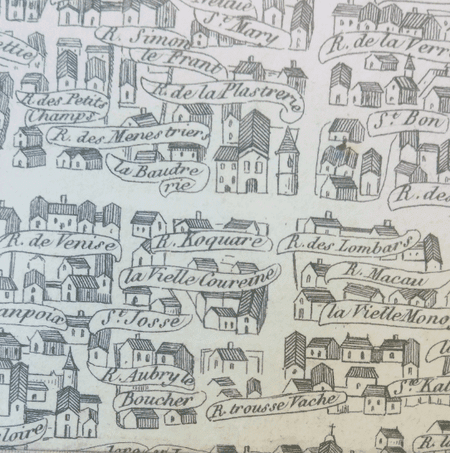 There is a forgotten history behind Paris's street names | © Nadia Barrientos

La Rue Marie-Stuart in Paris proudly bears the name of Mary Stuart (1542-1587), Queen of Scotland, but it’s hardly an honour. According to Barrientos, the queen was passing through the street and, full of curiosity, she asked what its name was. A simple and innocent question, but one that was followed by a flustered pause. 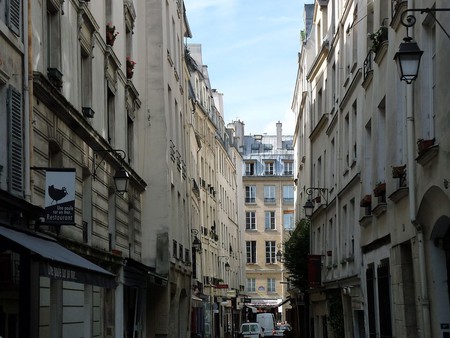 The name the locals gave to this street was far too scandalous to pronounce. It was known as Rue Tire-Boudin, a quite vulgar reference to the prostitution of the time (tire means ‘pull’ and boudin means ‘sausage’).

Overwhelmed by embarrassment, the guide decided to lie and said he didn’t know its name. Still keen to impress, he suggested they name it in her honour. The queen was pleased, though she would never discover it was really just to cover up the locals’ shame.

Another interesting legend behind famous streets in Paris includes the narrowest street in the capital, La Rue du Chat-qui-Pêche. According to Barrientos, it’s named after the mysterious cat of a 15th-century canon who was exiled from Notre-Dame. Legend has it that he was engaged in alchemy and that his curious powers transferred to the cat. 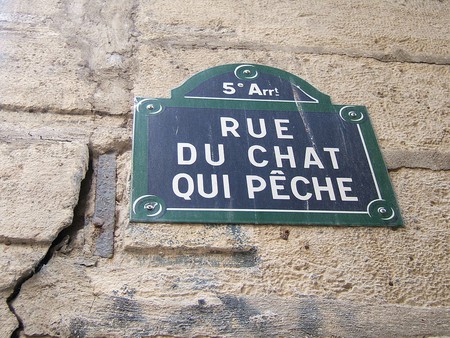 Some accounts report the unbelievable skills of the cat being able to catch fish from the dangerous, turbulent waters of the Seine river (which flowed past the bottom of this street) with just one swipe. Most cats are scared of water, so the locals were unsurprisingly awe-struck.

It’s for this reason, Barrientos says, that La Rue du Chat-qui-Pêche – ‘The Street Of The Fishing Cat’ – received its name, upholding this forgotten legacy right through to the present day.

As it happens, La Rue Marie-Stuart is not the only street in Paris to pay tribute to a past of prostitution. Many of the ancient names of Parisian streets were linked to sexuality, almost like a catalogue you could flick through to know where and where not to visit. Another example was the ancient name of the current Rue Le Regrattier-Île Saint-Louis, previously called Rue de La Femme Sans Teste (‘Street of the Woman Without Head’), which referred to a notorious tavern that was located on the same street. 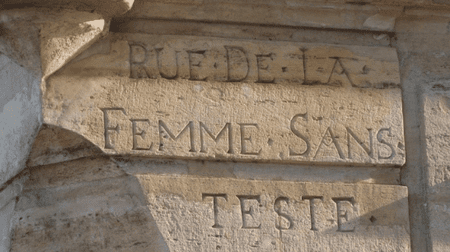 The art of memory was much more revered in ancient times compared to today, particularly when it came to navigating a city like Paris. When people didn’t have Google Maps or even pens in their pockets, they simply had to remember things, but such ‘things’ easily disappear. 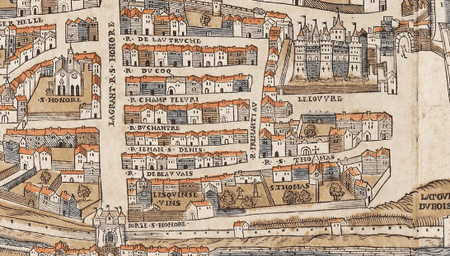 Ancient maps, once you peel back their history, illustrate a fascinating origin of taverns. In the olden days, there was widespread illiteracy where many people couldn’t read. The origins of many tavern names, therefore, arose from the simple fact of how useful they were as points of orientation. The Lion d’Or (Gold Lion) is one such example.

It’s easy to be swept away by imagination and wonder whether the Lion d’Or took its name from an ancient legend of an escaped lion or something of the sort. However, this is not the case. Its name came from the fact that people used to refer to this place, upon passing by its ancient wooden doors, as au lit on dort, which means ‘in the bed, we sleep’. The name simply highlighted its function. But over the years, this has been conflated into the similar sounding and more exciting name, Lion d’Or.

The magic of Paris

“What’s marvellous is the magic of Paris, how a name of a place disappears for 500 years but then comes back on a shop sign and no one knows what it means,” Barrientos says. 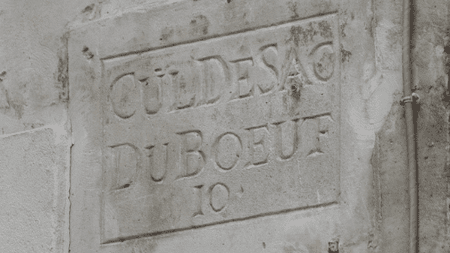 "What's marvellous is the magic of Paris" | © Nadia Barrientos

“What I try to do today is to resuscitate this dimension of time and memory that has since become invisible. I’ve spent my life in libraries, opening this Pandora’s Box.”