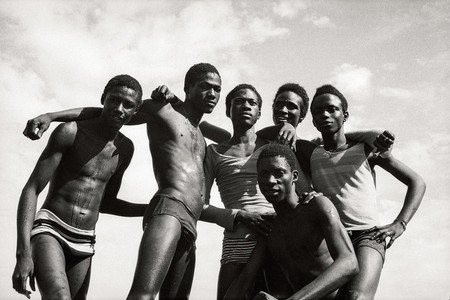 Mali Twist, an extensive survey of the exuberant work of the Malian photographer Malick Sidibé, is showing at Paris’s Fondation Cartier until February 26.

Sidibé died April 14, 2016, at the age of 80. It’s said he left behind 400,000 negatives in cardboard boxes in his Bamako studio. The Fondation Cartier show includes 250 black-and-white photos—all printed by the photographer. Thirty of these shots had never been seen before.

Known as the Eye of Bamako, Sidibé has been heralded, along with his compatriot photographer Seydou Keita, for his portraits of fellow Malians set against graphic backgrounds and African textiles. Whereas Keita had focused on making images of the middle class of the 1940s through the 1960s, Sidibé’s signature became the bravado, street style, and aspirations of the post-colonial generation.It is his ebullient images of Malian youth attending evening soirées and gathering by the local river that dominate the Paris show. 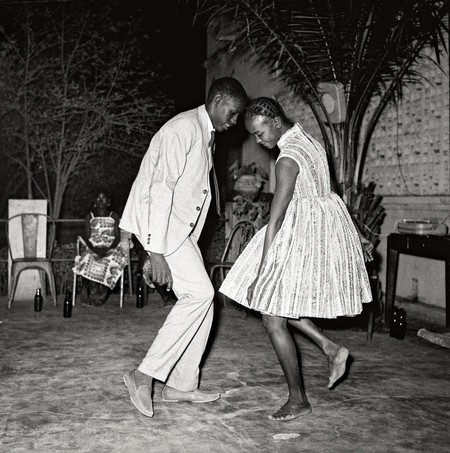 Born in 1935 or 1936 in Soloba (then in French Sudan), Sidibé lost the sight in his left eye in a childhood accident. He was the only one of the 17 children in his family chosen by the village chief to receive an education. His charcoal drawings won him a place at the École des Artisans Soudanais in Bamako, where he began an apprenticeship under French photographer Gérard Guillat-Guignard. In the 1950s, Sidibé began shooting weddings and christenings. In the early 1960s, he turned his Brownie Flash (the same camera Keita used) on nightlife and youth culture.

Twisting the night away

Mali gained independence in 1960, and the country’s newfound exuberance and freedom would energize Sidibé’s images. Partygoers at social clubs like the Sputnik, the Beatles, the Happy Boys, and the Zazous put their all into dressing and then letting loose on the dancefloor, where for the first time they could dance close. Sidibé’s photos are filled with confident, kinetic Malian youth fueled by music: James Brown, the charanga, and the twist were the preferred beats of the time. (The show’s title, Mali Twist, comes from a popular song that played on Radio Mali in 1963.) Music, Sidibé said, was the “real revolution.”

The Fondation Cartier exhibit includes numerous self-made “contact sheets” of Sidibé’s social-club shots, along with his iconic image Regardez Moi (1962), which depicts a dancer mid-twist, and Nuit de Noël (1963), which shows a boy and girl head-to-head; this picture—of a brother teaching his sister how to dance—was named one of the “100 Most Influential Photos” by Time magazine. 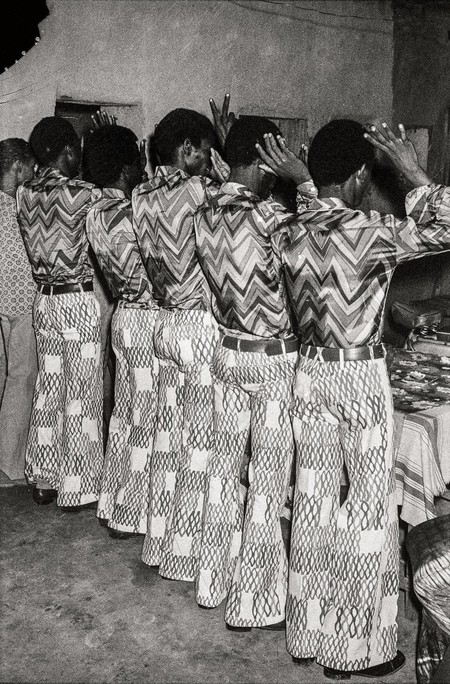 In another picture, five males in matching outfits simultaneously adjust their near-identical Afros. In Sidibé’s river photos, boisterous bathers of both sexes revel by the riverside, their friendship and ephemeral youth palpable.

In 1962, Sidibé opened Studio Malick, measuring three by four meters, in the Bagadadji district of the Malian capital.In his studio images, SAPEURs (a play on ‘Société des Ambianceurs et des Personnes Elegantes’, or ‘The Society of Tastemakers and Elegant People’) and poseurs stand proudly with cigarettes dangling from their lips; others straddle their motorbikes. Turned out in wide-belled pants, oversize sunglasses, colorful prints, and attitude to burn, Sidibé’s subjects surpass Brooklyn’s youth in terms of cool.

Sidibé was meticulous about composition in his studio work, which he focused on during the 1970s. He utilized his drawing background to help position his subjects, often framing them head to toe. “The photographer’s relationship with his subject is established by touch,” Sidibé said.

In one studio shot, a young boy has stuffed his sweater to make himself look pregnant; the adjacent youngster is styled and painted like a pygmy. The playful image is a visual in-joke shared by the photographer and his subjects, a parody of the National Geographic and Irving Penn tribal portraits of the time. 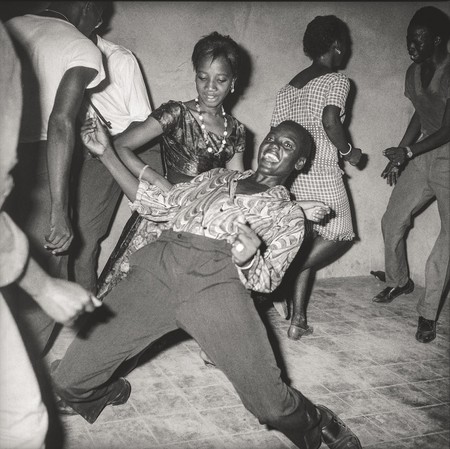 At his best, Sidibé is unsurpassed as a master printer capable of capturing the full tonal range of black skin, especially against the deep black African night sky. This is no small feat: The photographic gray scale was built upon white skin, and black skin is often ignored by photographers. Sidibé, instead, realized its power and beauty.

Sidibé’s shots were mostly pocket-size and often lined with brown tape; like Seydou Keita’s photos, they were intended as personal souvenirs. In the 1990s, both photographers’ images were gathered up (and blown up) by collectors, and both came to international acclaim. Sidibé won several prizes, including the Hasselblad Award, and in 2007 he became the first African to win Venice’s Golden Lion. 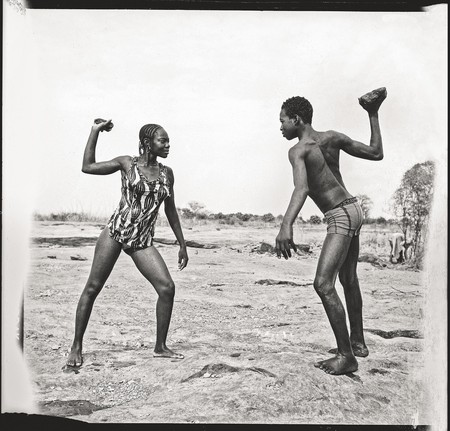 Sidibé eventually surpassed Keita as an influence on pop culture. Sidibé’s images were echoed in Beyoncé’s spring 2017 Push Party Instagram pictures, while singer Inna Modja paid homage to his work in her Timbouctou video. Janet Jackson’s Got ’Til It’s Gone was steeped in Sidibé’s imagery, as was the pre-fall 2017 Gucci couture campaign.

In more recent times, the predominantly Muslim Mali deemed Sidibé’s images risqué, and Sidibé had been unable to show his work in his country.

Sidibé’s subjects were the people he loved and lived among: He shows them letting go, having fun, projecting their best selves. He photographed an Africa rarely seen in images made by white photographers—a place of sheer joy.

Mali Twist has a perpetual line, so it is advisable to order tickets in advance. The exhibit’s re-creation of Sidibé’s photo studio, complete with props and costumes, is a favorite for self-portraits. Find a café after the show and take it all in, but don’t be surprised when the stranger in the next seat flashes his phone with a selfie shot against the backdrop of Sidibé’s signature stripes.