The Caravaggio In The Attic: Judith Beheading Holofernes Goes On Show in Paris 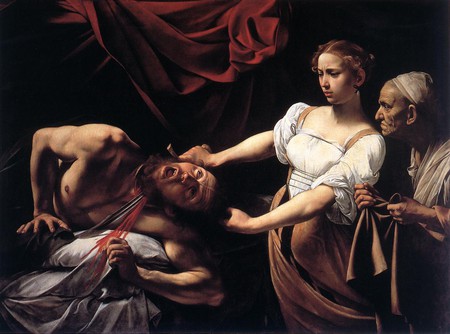 When a couple from Toulouse, in south-western France, climbed into their attic hoping to unearth the source of a leaking pipe, the last thing they expected to find was a Caravaggio masterpiece worth a possible $137 million.

Judith Beheading Holofernes went on display in Paris after its rediscovery in early 2014 and, for good reason, has sparked controversy within the art world.

Paris-based gallery owner and expert on the Old Masters, Eric Turquin, was invited to view the painting shortly after it was found, and he instantly suspected the work to be something very special indeed. After two years of scrupulous analysis, Mr. Turquin is confident in confirming the painting to be an original, and he believes that it was painted by Caravaggio. Mr. Turquin does concede, however, that it is unlikely that a consensus on the work’s provenance will ever be reached by the art world in its entirety. Mina Gregori, a Caravaggio expert and art-historian, has suggested that the painting is more characteristic of 16th century Flemish artist Louis Finson, who was famed by his contemporaries for his uncanny Caravaggio reproductions.

Caravaggio, whose name in full was Michelangelo Merisi da Caravaggio, was active from approximately 1595 up until his death in 1610. The ‘greatest artist in Rome’, who was a pioneer on the Baroque artistic scene, lived an unconventional and somewhat violent life, and was even reported to have killed a man.

Experts believe that Judith Beheading Holofernes, which depicts the biblical figure of Judith decapitating the Assyrian general Holofernes, was painted around 1599 and disappeared from circulation 100 years later. Assuming this Caravaggio in the attic is an original work, it exists as one of two versions of the painting done by Caravaggio in the late 16th century. The other version, depicting a more gentile Judith, is on display at the National Gallery of Ancient Art, at Pallazo Barberini.

It has been suggested that the painting made its way to France 150 years ago when an ancestor of the existing owners brought it home from a Spanish military campaign under Napoleon.

The painting, which was first rediscovered in April 2014, has hit headlines a mere month after another lost-and-found Caravaggio went on display in Tokyo. Mary Magdelene in Ecstasy was revealed to the public at an exhibition in the Japanese capital in early March this year.

For the time being, the provenance of Judith Beheading Holofernes remains questionable, despite there being considerable evidence to suggest that the paintingis indeed an original Caravaggio. It seems likely, however, that a couple from Toulouse, who thought they were merely forcing a door open to fix a broken water pipe, in fact forced open a door onto a majestic and lucrative discovery, and a re-routing of the trajectory of art-history.

The painting will remain in France for 30 months in order to allow French museums to consider its acquisition.