The Best Vegetarian and Vegan Restaurants in Paris 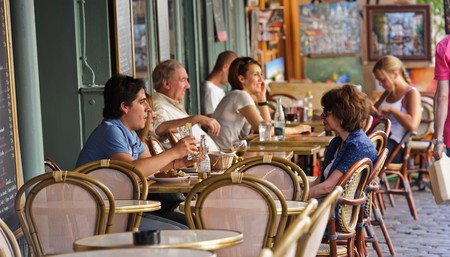 France is not famous for its vegetarian cuisine. Whether it’s steak-frites or beef bourguignon, many of the country’s most famous recipes are heavy on the meat (and often light on the vegetables). But with plant-based dining taking hold around the world, the French capital has finally welcomed vegetarian- and vegan-friendly restaurants worth writing home about.

Just a few years ago, a request for vegetarian options at any Parisian restaurant would have left many waiters stumped – and offering an assortment of questionable choices ranging from the not-vegetarian (chicken or fish) to the not-delicious (green salad with watery winter tomatoes and little else).

Luckily, this is no longer the case. Amanda Bankert, founder of Boneshaker Doughnuts in Paris’s 2nd arrondissement, notes that while “traditionally, French cuisine was 100 percent meat and dairy-based,” today, “attitudes are changing.”

Fred Pouillot, the vegetarian founder of Le Foodist cooking school in Paris’s 5th arrondissement, explains that French cuisine, by design, is characterised by “a reliance on techniques to cook each and every ingredient separately,” as well as “a repertoire steeped in regional tradition”, and, “a centuries-old taste for innovation.” As a result, Pouillot notes, French cuisine can be a “solid basis” for vegetarian cooking – though reliance on dairy makes fully plant-based recipes difficult to envision.

In his vegetarian cooking classes, Pouillot creates both traditional French recipes that are naturally vegetarian, such as leeks with gribiche sauce or ratatouille, as well as traditional recipes reimagined through a vegetarian lens.

“For example, you do not need a beef stock to make a very good French onion soup,” he says. “So we take the opportunity to show people how to make a delicious and deep mushroom stock.” 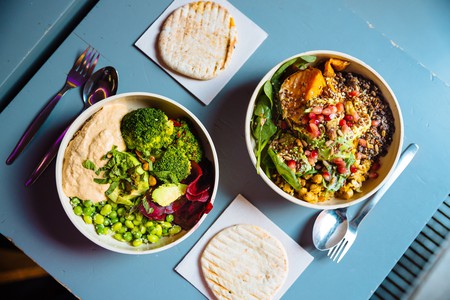 Both approaches feature on Paris’s plant-based dining scene, which nevertheless remains in its fledgling stages when compared to other preeminent food cities around the world. Bankert calls the scene “limited but enthusiastic,” but nevertheless growing, pointing to prominent French chefs like Alain Ducassse who have already begun focusing more and more on vegetables in their menus.

Robert Mendoza, chef of Le Saint Sébastien in Paris’s 11th arrondissement, is one of several chefs in the city naturally gravitating towards a more plant-heavy menu, a choice he says stems in large part from the wealth of fantastic produce around Paris. 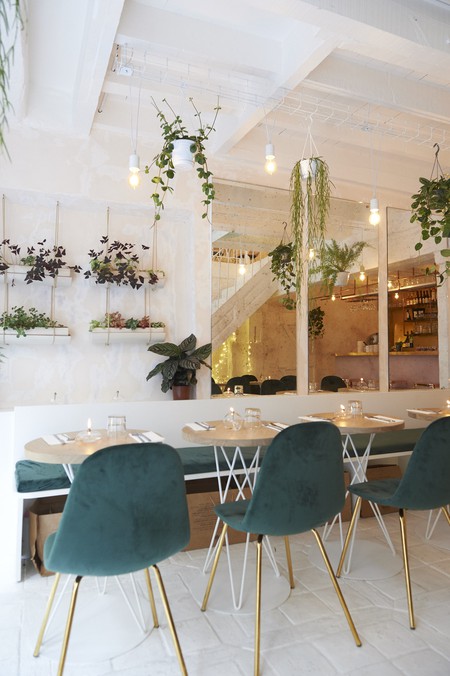 “What makes plant-forward cooking exciting is working directly with a variety of farmers and foragers around Paris,” he says. “I don’t think I consciously make it a priority working with the plant kingdom, it’s just how I like to eat and what comes more naturally.” 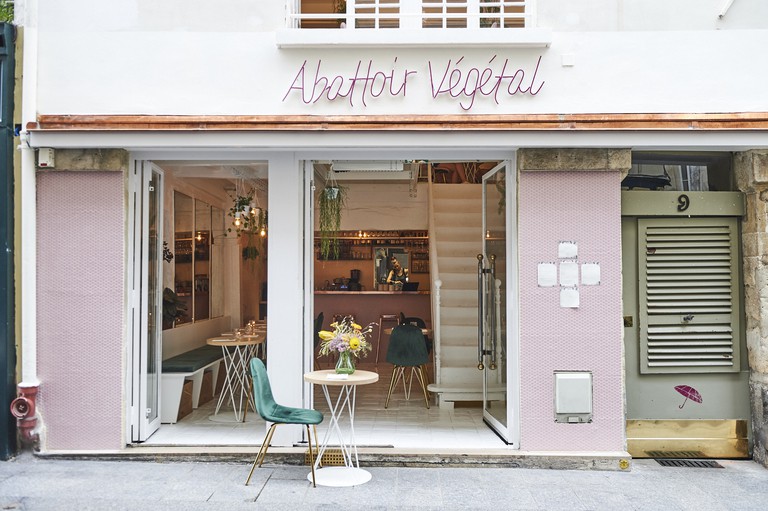 This vegan restaurant’s name translates to ‘vegetable slaughterhouse’. With a menu featuring exclusively organic vegan ingredients, it takes its inspiration not from French cuisine, but from international influences: West African mafé (peanut stew), Thai kao pad (fried rice) and American burgers may all appear in this Montmartre dining room. A special €17 (£14) lunch deal is a steal, including a soup of the day, vegan plate and dessert. 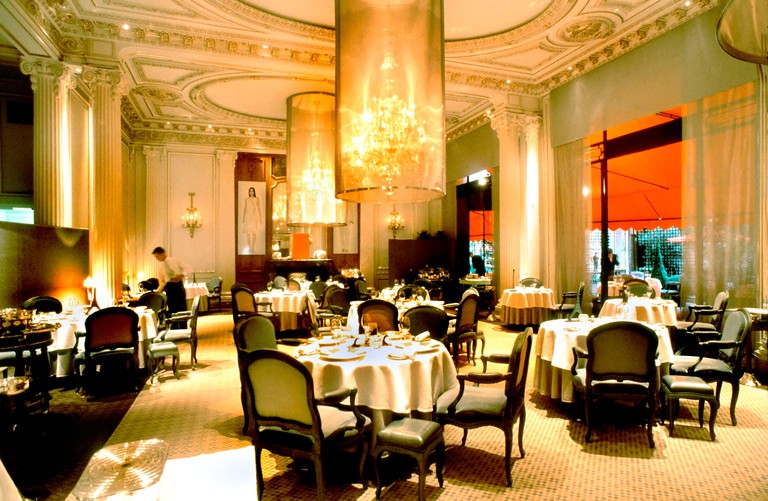 In 2014, Alain Ducasse overhauled the menu at this luxury hotel to focus on sustainability, with a plant-heavy menu that also includes plenty of pescatarian options. All of the produce on the menu comes from the gardens at the Château de Versailles, and is highlighted in dishes such as spelt with sea vegetables and salsify or truffled pasta with nutritional yeast. Be sure to note your specific needs when making a reservation for the best chance at more choice, especially if you do not eat fish. 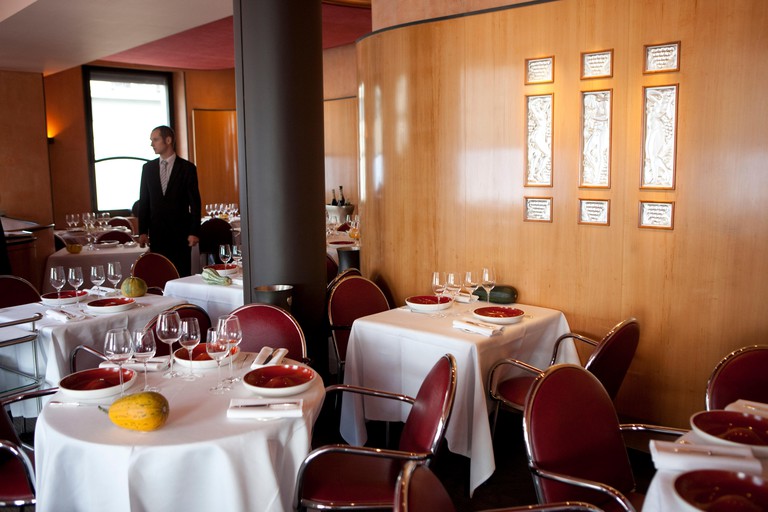 © Maurice Rougemont / Alamy Stock Photo
Book Now
Vegetables have been the centrepiece of Alain Passard’s Michelin-star menu since 2001. Today, the chef takes full advantage of the richness of the soil in western France with vegetable gardens that provide the bounty featured on his menus. A vegetable tasting menu for €420 (£353) offers a wide variety of flavours and textures with haute cuisine appeal. The prix fixe finishes with Passard’s landmark “bouquet de roses” apple tart, which is crafted in the form of a rose.
Open In Google Maps
84 Rue de Varenne, Paris, Île-de-France, 75007, France
+33147050906
Visit Website
Give us feedback

Wild And The Moon

The organic, plant-based menu at Wild and the Moon has captivated many a plant-lover, including Chef Mendoza of Le Saint Sébastien, who names it as his favourite inexpensive plant-based restaurant in Paris. The fully vegan menu features açai smoothie bowls, bo bun-inspired konjac noodle bowls and lentil bowls, which join a daily hot plate (often a curry), soups, and snacks such as guacamole, avocado toast and vegan, gluten-free muffins. With several locations throughout the city, this spot is as popular for lunch as it is for a coffee (or a cold-pressed juice) and a snack.

Paris is famous for its pastry, and while most French pastries are butter-based, vegans visiting France’s capital need not despair. Boneshaker Doughnuts’s Bankert says that this spot in the 11th arrondissement makes “consistently delicious vegan versions of traditional French pastries”. Vegan croissants, macarons and flan are all on offer, and with gluten-free versions of some pastries, too, it’s a must-visit address for anyone in Paris with dietary restrictions.

While vegan offerings in Paris skew towards the health food that defined plant-based dining in other cities a decade ago, Le Potager du Marais seeks to take advantage of its location in France’s capital to adapt traditional French food for vegan diners. Dishes may include seitan (wheat gluten) bourguignon in a red wine sauce, mushroom terrine, or tofu blanquette in a rich, white gravy. Desserts continue in the same vein, with vegan chocolate mousse, crème brûlée and tarte tatin.

Judy pegs itself as neither vegetarian, nor flexitarian, but rather “qualitarian”. This health-conscious, gluten-free restaurant regularly changes its menu in accordance with the seasons but may boast Buddha bowls, avocado toast, soup or teriyaki stir-fry. While meat does feature in some options, there is always a wealth of both vegetarian and vegan choices, and the smoothies are particularly tasty.

Restaurant, Vegan, $$$
Facebook
Email
Twitter
Pinterest
Copy link
Share
Map View
As its name suggests, 42 Degrés offers cuisine that’s not only vegan: it’s raw. This restaurant’s gourmet approach means the menu may include choices such as brussels sprouts and pumpkin raw granola, sprouted buckwheat toast and raw konjac and sweet potato noodles with seaweed pesto. With a raw, plant-based cheese course and raw apple tart for dessert, it’s an impressive demonstration of what can be achieved with raw ‘cooking’. Le Foodist’s Pouillot notes that he enjoyed the restaurant “thoroughly” on his first visit, when the chef applied “classic French techniques to the concept of vegan raw food”.
Open In Google Maps
109 Rue du Faubourg Poissonnière, Paris, Île-de-France, 75009, France
+33973657788
Visit Website
Give us feedback

Asian restaurants are often the best bet for plant-based diners to find something interesting to eat in Paris, but at Tien Hiang, vegetarians can eat the whole menu. The first fully vegetarian Asian restaurant in Paris, Tien Hiang uses soy as the base for almost every dish, from its fried ‘chicken’ to its glazed ‘pork’ to its ‘shrimp’ bo bun. Influences run the gamut from Cantonese to Vietnamese to Japanese, with something for every palate.
Open In Google Maps
14 Rue Bichat, Paris, Île-de-France, 75010, France
+33142000823
Visit Website
Give us feedback

Paris’s rue des Rosiers has long been the go-to spot for all things falafel, with spots such as L’As du Fallafel and Mi-Va-Mi battling it out for years. Israeli restaurant Miznon was nevertheless a welcome addition to the neighbourhood when it opened around the corner on rue des Écouffes. The ever-changing menu always boasts several vegetarian options that may include marshmallowy roasted sweet potatoes, ratatouille or the now-famous monumental whole-roasted cauliflower.

Israeli cuisine also captivates diners at Maafim, which Bankert particularly loves for its falafel. Reviews of this spot from the team behind Salatim – a garment district favourite for its schnitzel sandwiches – praise the shakshuka, eggplant arancini, and dukkah-spiced roasted carrots, and the rich, decadent French-toast-style babka is already becoming a local favourite. The lunchtime prix fixe, meanwhile, is a reasonably priced option often featuring vegetarian or pescatarian options.

This article is an updated version of a story originally written by Jade Cuttle.