The Best Things To Do in Pigalle, Paris 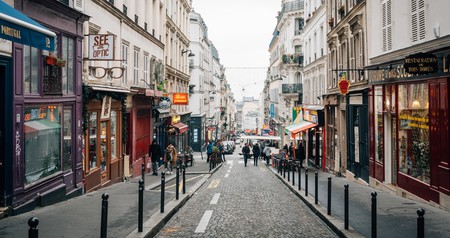 Paris’s seedy red-light district of Pigalle has recently undergone something of a revival, and it’s now frequently referred to as SoPi (‘South of Place Pigalle’) by its residents. This vibrant neighbourhood is on the up-and-up as hip new businesses move in, attracting a new, sophisticated clientele. Discover the quartier and the best things to do in Pigalle with our detailed guide.

Get your mandatory selfie at the Moulin Rouge

If you’re new in the area, it’s basically written in French law that you need to visit Pigalle for your obligatory selfie in front of the famous red mill. But there’s more to the Moulin Rouge than just the cancan. It was the first building in Paris to be powered by electricity, in 1885, and it houses its own feather company, which was needed to keep up with the rising demand for costume changes and maintenance. 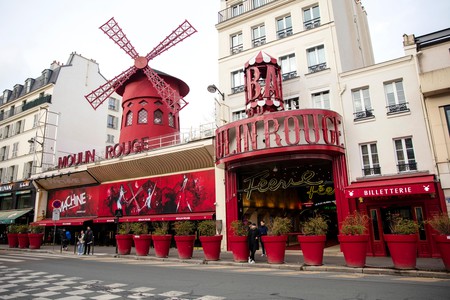 The acid, almost iridescent hues of the Pigalle basketball court make it an aesthete’s dream. It’s tucked away on the Rue Duperré, nestled amid typical French architecture. It’s sassy and wonderful, born from a collaboration between fashion brand Pigalle and design and photography agency Ill-Studio, and supported by Nike, in the hopes of encouraging local kids to get on the court.

Discover the soul of SoPi on Rue des Martyrs

The true heart of SoPi is the Rue des Martyrs. This bustling avenue is a haven for foodies and gastronomes, a bit like Rue Montorgueil for the northern arrondissements. Stop by the Rose Bakery, an English café run by a Franco-British couple and whose gorgeous Instagram features mouthwatering dishes. Order a box of choux to go from Popelini, where crunchy, buttery pastry is stuffed with some truly excellent flavoured creams. Don’t miss Glaces Glazed, one of the best ice cream shops in Paris, with unusual flavour combinations (the Black Sugar Sex Magic is an intriguing mix of wasabi, ginger and dark chocolate), or Carmello for more traditional Italian gelati (and one of David Leibovitz’s faves). 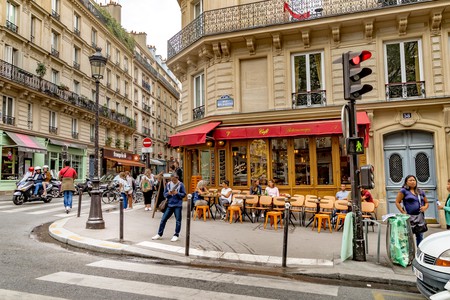 Of course, no Bobo neighbourhood is complete without some decent shopping options. You’ll find second-hand and vintage treasures at Troc en Stock and Chine Machine, but if it’s high fashion you’re after, A.P.C., concept store L’Œuf and Spree aren’t too far away. For a side of caffeine to go with your homewares, try Rocketship.

This quarter within SoPi was surprisingly inspired by London’s urban architecture around the time it was built. It was popular among the working class and intellectual elite of the day, as well as artists, writers and musicians. If you’re looking for the stereotypical Parisian apartments with wrought-iron railings and neoclassical detailing, take a stroll down Rue Blanche, Rue La Bruyère and Rue Henner. Stop by the Musée Gustave Moreau for the famous twisting staircase, then continue along Rue de la Tour-des-Dames, where you’ll find some of the best examples of this particular architectural style. 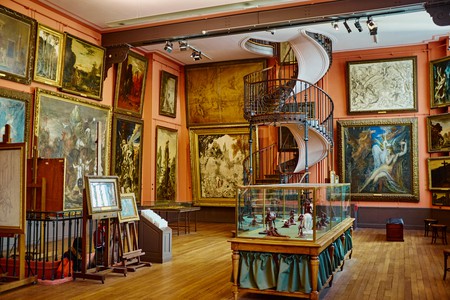 When the Grand Pigalle Hotel opened its doors, it signalled the beginning of Pigalle’s transformation. Velvet and gold accents contrasting with rough stone walls bring a gritty art nouveau twist to this chic Italian-inspired bar on Rue Victor Massé. The subdued lighting and impressive international wine selection make this place best suited to an intimate rendezvous, especially when the soundtrack is so moody and dark. During sunny days, the big windows are often thrown open to let in a breeze, which pairs well with the fruity cocktails poured over crushed ice.

A l’Etoile d’Or is regularly cited as the best candy store in Paris. It’s enchanting with an old-world atmosphere that perfectly complements the array of confectionary on display. The candy is often housed, wrapped and boxed in packaging that looks like it’s from another time. The owner, Madame Acabo, is reason enough to visit the store. In her distinctive blonde plaits and pleated skirt, the Madame is an imposing figure at first glance, but upon your first conversation – which she will absolutely strike up – you’ll be lovingly guided around the store with explanations for almost everything in sight. For true chocolate lovers, ask for the Bernachon chocolate, one of the only brands that create bars straight from the bean. Madame Acabo’s store is the only one outside Bernachon’s flagship in Lyon to stock the brand.

The best thing about La Musée de la Vie Romantique (named after the Parisian Romantic Era, an artistic, intellectual and literary movement) is the charming adjoining café. Surrounded by roses and fuchsias, it’s an ideal place to spend your time on sunny days. The fresh and romantic atmosphere makes it easy to forget that you’re in the middle of one of the most densely populated cities on the planet. The museum itself was built in the 1830s by Dutch artist Ary Scheffer, whose friend the feminist writer George Sand spent many evenings here for Scheffer’s famous soirées. These two prominent figures are honoured with the museum’s permanent exhibitions.

Restaurant, Wine Bar, French, $$$
Facebook
Email
Twitter
Pinterest
Copy link
Share
Map View
Experience a bit of New York City in SoPi by visiting Buvette, a delightful American-style restaurant with a very New Yorkaise menu – and frequently included on top SoPi restaurant lists. Buvette was first introduced in New York’s West Village as an American’s take on a French wine bar, which has since come full circle to land back in Paris. All ingredients are locally sourced from the markets around town, and all are, obviously, French-inspired with a new world twist. Think fresh, crusty baguette stuffed with ratatouille and goat cheese, or foie gras mousse with onion and bacon. Of particular notoriety is Le Sandwich: a bacon, egg and cheese concoction that, to the French palate, is typically American. If you’re after something more substantial, the coq au vin is oft talked about, as is the selection of wines on offer.
Open In Google Maps
28 Rue Henry Monnier, Paris, Île-de-France, 75009, France
+33144634171
Visit Website
Give us feedback

Of course, you can’t experience Pigalle without a little late-night tipple. Lulu White Drinking Club, named after a famous New Orleans madam and housed in a building that was once (appropriately?) a brothel, is a speakeasy dedicated to the green fairy. Regularly mentioned on lists of top bars of the world, Lulu White Drinking Club is hidden away at 12 Rue Frochot, marked only with a tiny gold plaque. If you can find it, you’ll discover an intimate, delicately illuminated Belle Epoque bar with many absinthe-inspired cocktails on the menu, and where feathers and fringes are standard issue.