The Best Things to Do in La Défense, Paris 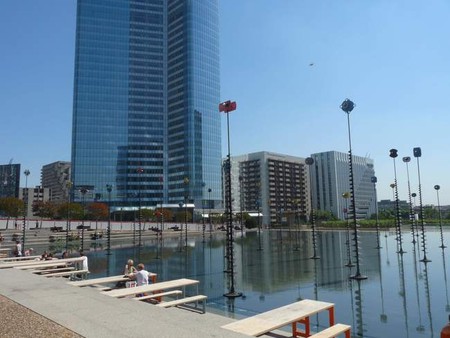 From celebrated sculptures to a beautiful cathedral and stunning modern architecture, there is plenty to experience in Paris’ La Défense district.

When you think of culture in Paris, La Défense doesn’t immediately spring to mind – primarily, it’s a business district, much like London’s Canary Wharf. However, it’s about time this perspective was upturned. In this article, we give you a glimpse into just a handful of the district’s hidden architectural and artistic highlights.

The most unexpected sight in La Défense is a sculpture display by Spanish artist Joan Miró (1893 – 1983). The piece is called Pair of Lovers Playing with Almond Blossoms and was created in 1976, less than a decade before Miró’s death. 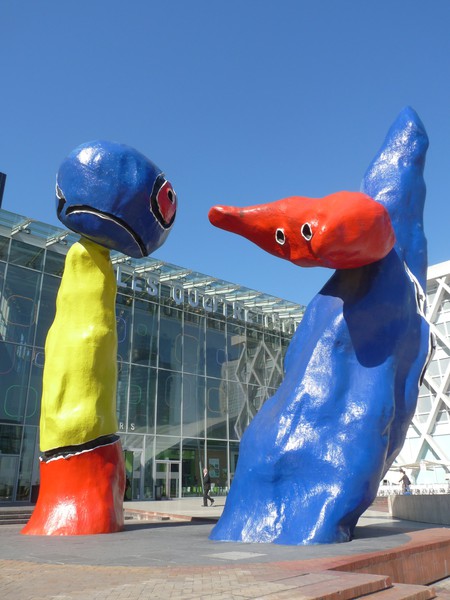 These two abstract creatures create a playful contrast with the towering, uniform skyscrapers of the business district’s surroundings. Reminiscent of a child’s Play-Doh creation, they infuse the area with a sense of fun. 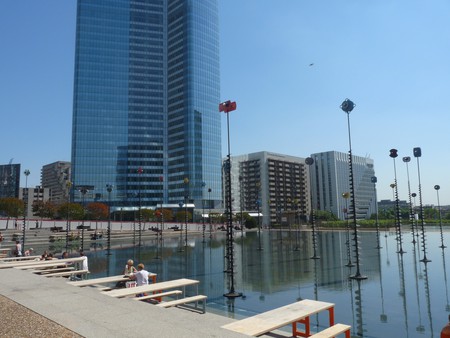 While they might seem a little out of place at first, the brightly-coloured, creative shapes of Miró’s sculptures prove that the area isn’t just for serious people in suits. It’s a subtle hint that the district is bursting with unexpected surprises, for those who are willing to explore.

Immerse yourself in an open-air museum

The Joan Miró sculptures might be the most vibrant, imposing works of art to catch your attention in La Défense, but there are other artistic gems lurking in the shadows waiting to be discovered as well. Scattered between the buildings of La Défense is a magnificent open-air museum, with 60 works of art signed by great modern and contemporary artists. 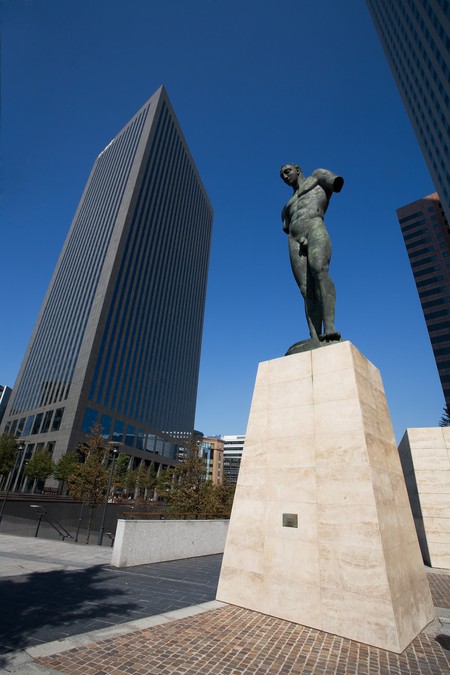 These include Calder’s Red Spider, César’s The Thumb, the Vegetal Chimney by François and La Défense de Paris by Barrias. You can also book a guided open-air art space tour to make sure you don’t miss any notable works.

Watch the sun set under the Grande Arche 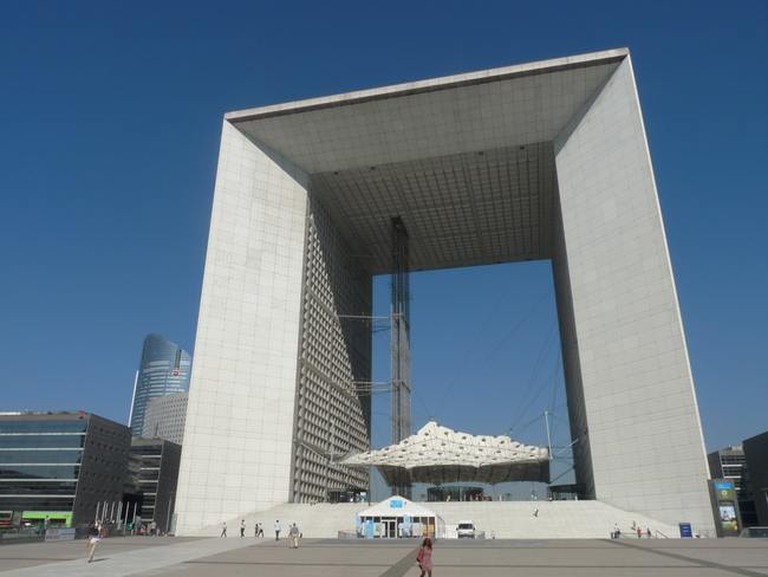 This cube-shaped monument first opened in 1989 after being selected to win a national design competition launched by former French president François Mitterrand. Known as La Grande Arche de La Défense, it rises up against the Parisian skyline like a 20th-century version of the Arc de Triomphe. Its jaw-dropping size, 110 metres tall and wide, is so huge that it could actually fit the Notre-Dame Cathedral within its arch. It’s most incredible to visit when the sun sets in the centre of the Grande Arche vault.

Be mesmerised by the Fontaine Agam’s mosaics

The Fontaine Agam is one of the most unusual and spectacular fountains in Paris. With 66 water jets and a vibrant pattern of mosaics that rise majestically from the road below, it’s a magical place to visit in La Défense.

If you’re planning to stop by a boulangerie and buy a sandwich to eat on the go, then this is a great spot to tuck in by the side of the fountain. There’s a calm tranquillity to be found in the beauty of its basin. 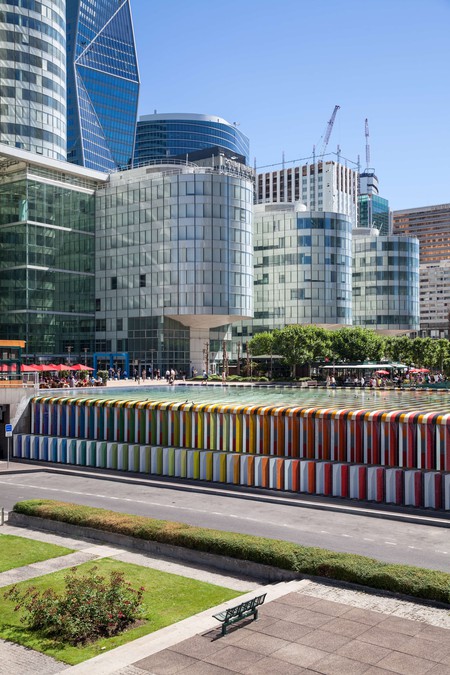 From the famous Notre-Dame on the Île de la Cité to the Grande Mosque of Paris, places of worship are some of Paris’ most popular attractions. The Cathédrale Sainte Geneviève et Saint Maurice is not only a beautiful, overlooked example of religious architecture in the city, but it is also rooted in some fascinating history. Sainte Geneviève, after whom the cathedral is named, was born around the year 420, supposedly in the spot where the cathedral stands today. Legend has it that Sainte Geneviève was born with healing powers and so, many tourists flock to pray by the ‘healing waters’ of the well. You can also visit the sarcophagus that holds Sainte Geneviève’s remains.

The Grande Arche vault might be the most iconic landmark in this business district, but there are plenty more architectural wonders to be discovered, too. 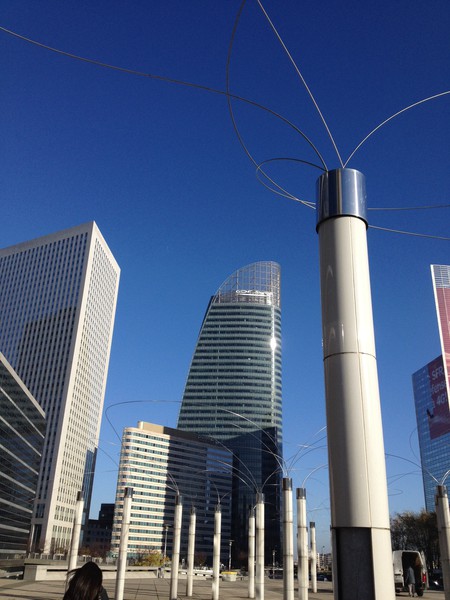 There are unique and unusual buildings designed by internationally renowned architects at every turn in this district. These include the imposing Centre of New Industries and Technologies, one of the first ever buildings in La Défense, and the pioneering towers of the 1960s, right through to more recent, bold additions like D2 or Majunga.

Even now, renovations, developments and new buildings mean the area is constantly reinventing itself. The best way to learn about what makes this district so architecturally special is to enjoy a guided tour by a local expert.

Track down the Berlin Wall

A small segment of the Berlin Wall, the concrete barrier that physically and ideologically divided Berlin from 1961 to 1989, can be found next to one of the office buildings in the La Défense area of Paris. 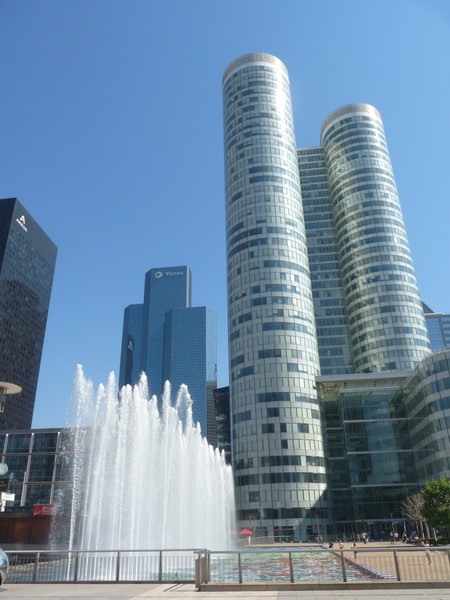 It can be a little difficult to find, unless you know exactly where to look, but there are tours on offer that can help you track down this hidden relic.

Some of these walks are combined with a street art tour, including the work of Catherine Feff, for example, a Parisian artist and painter born in 1954. Such tours give a rare insight into the most overlooked district in Paris. 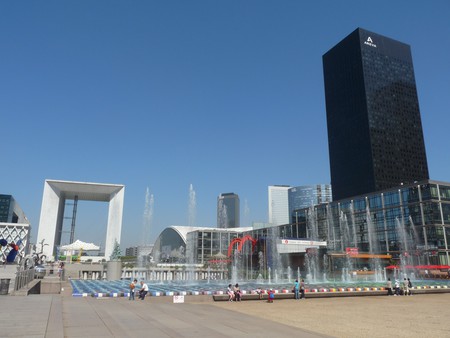 La Défense is a diverse and unexpected cityscape | © Taïna Duffourc

Whether you prefer to browse tiny designer boutiques or dash by the bigger outlets, Les Quatre Temps offers an impressive selection of shopping options. The centre brings together all the hottest brands under one convenient roof. The best time to shop here tends to be between January and February, during the winter sales, or soldes, which are mandated by the French government. During this time, shops must slash prices on pretty much everything, with up to 75% in price reductions.