The Best Hotels Near the Champs-Élysées, Paris 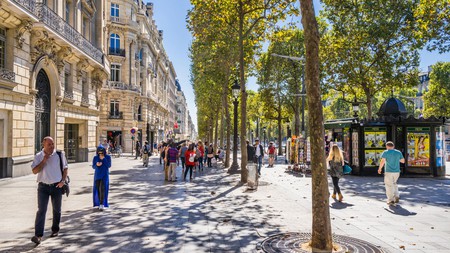 The Champs-Élysées in Paris is internationally renowned for its high-end, elegant boutiques and is often described as one of the world’s most beautiful avenues.

As well as being home to the city’s best shops, the Champs-Élysées has long been the very heart of Paris, and many events take place on the boulevard, including Paris’s New Year’s Eve street party and the yearly Bastille Day fireworks over the Arc de Triomphe. As may be expected, this strip also boasts the most decadent places to stay in Paris. You can book the best hotels located near this delightful boulevard right here on Culture Trip. 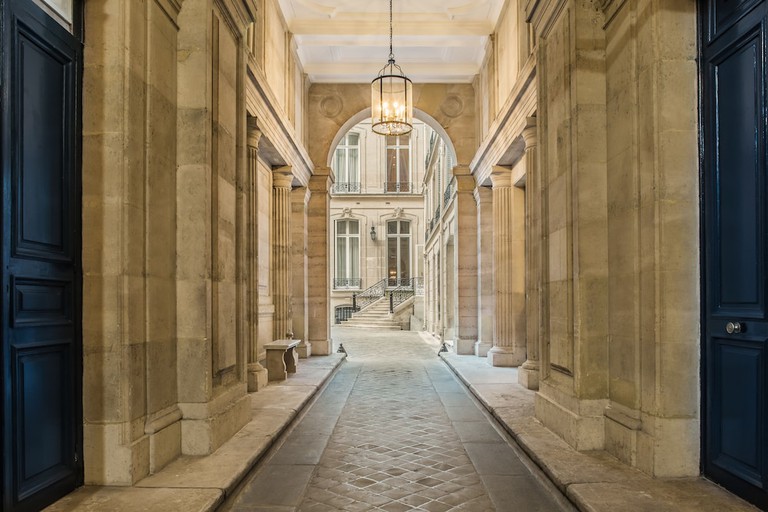 Alfred Sommier was a notable sugar baron in the 19th century, and his former home is now one of the most desirable hotels in the 8th arrondissement. Pillars, marble staircases and ornamental fireplaces work together to create a regal atmosphere. A print of another opulent French estate hangs over every bed, and the building’s history is even written into the leather-bound room directory; and Les Caryatides restaurant feels every bit as classy, but the menu is modern and inventive. 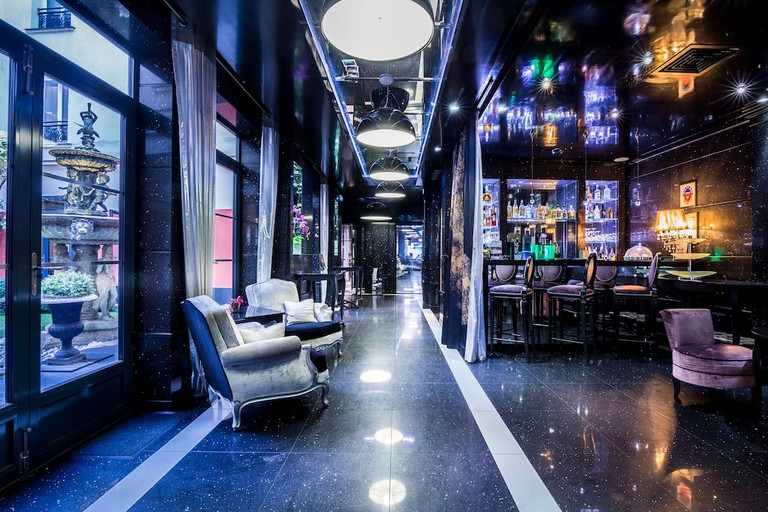 The Maison Albar Hôtels – Le Diamond markets itself as a tribute to diamonds, and this is evident by the glimmering design. The rooms have white walls, silver chandeliers, wrought iron balconies and, in some cases, white-stained exposed beams. The hotel also offers a bar lounge and terrace overlooking the city, with a great view of the nearby Opera and Place de la Madeleine. 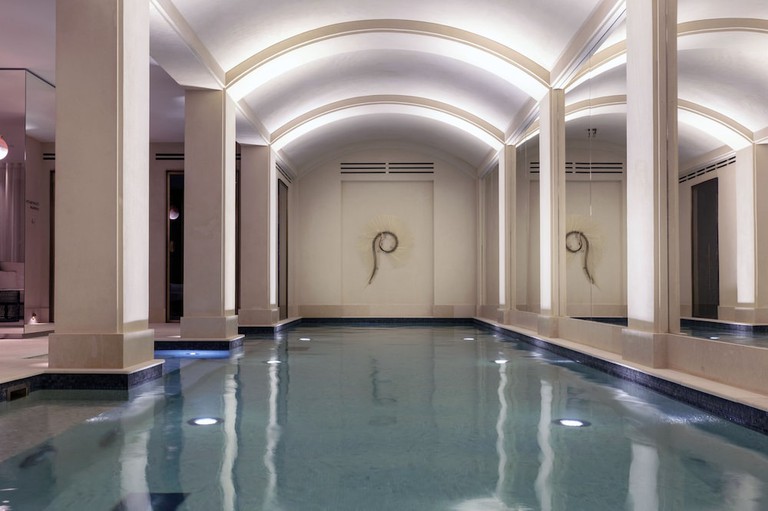 As the name suggests, this hotel is less than ten minutes from the famously fashionable Rue du Faubourg Saint-Honoré. Immediately upon entering, the class of the Madeleine district is on display, from the white archways to the marble and herringbone parquet floors. All 36 rooms and suites feature an appealing mix of modern interiors and eye-catching wall hangings. There’s a wealth of textures to play with, from velvet bedheads and plush rugs to brushed brass gold bathroom fixtures. There’s a subterranean spa with a 15-m (49-ft) pool, as well as a high-end restaurant and a bar. 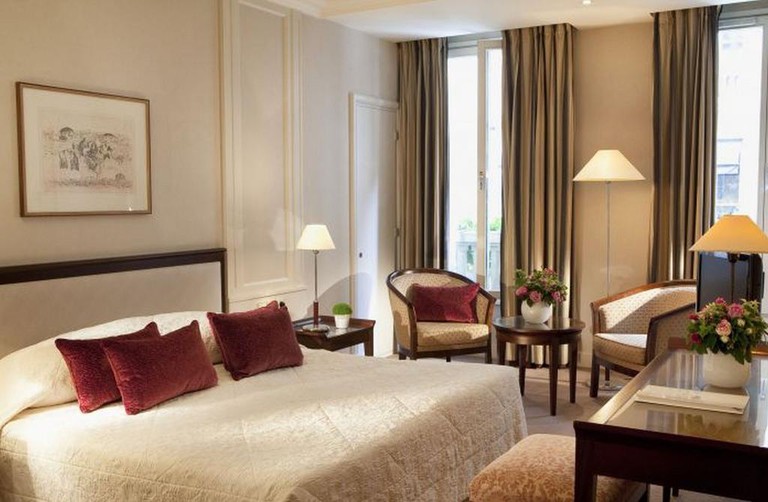 The Bedford has been owned and operated by the same family for more than a century, and this extensive history is evident across every inch of the hotel. Whether it’s the magnificent stucco walls and domed ceiling in the restaurant or the warmly understated classical charm in the rooms, everything feels deliberate and artful. The restaurant offers traditional French cuisine, and there’s an adjacent bar that serves lighter meals and a wide selection of cocktails. Place de la Madeleine is just over the road and can be seen from many of the rooms. 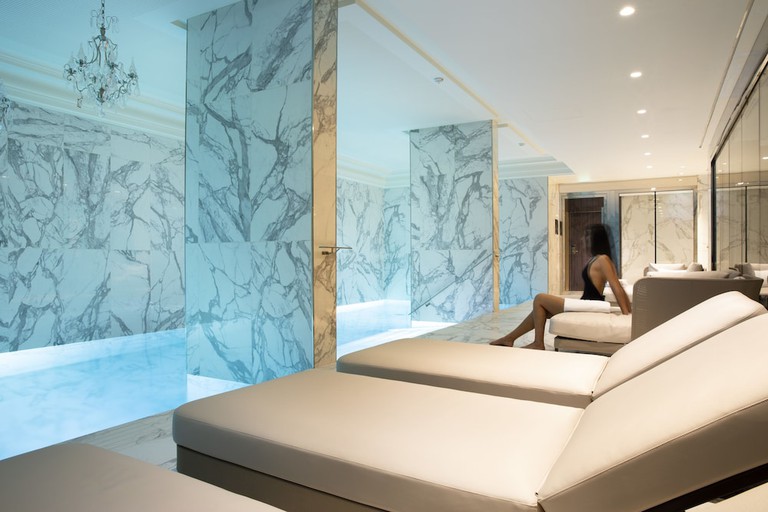 Le Damantin sits right on the bank of the Seine, welcoming guests in with its charming red and cream brick exterior. Inside, a blend of traditional and contemporary interiors make for an appetising mix. The slickly designed rooms – in shades of grey, black and white – come outfitted with books and board games to keep you busy. The salubrious suites offer views of the Eiffel Tower. Unwind with a trip to the spa where you’ll find a pool, sauna and two treatment rooms. Other perks of this place include a lounge with a fireplace, a bar, a traditional restaurant and a winter garden housed within an indoor courtyard. 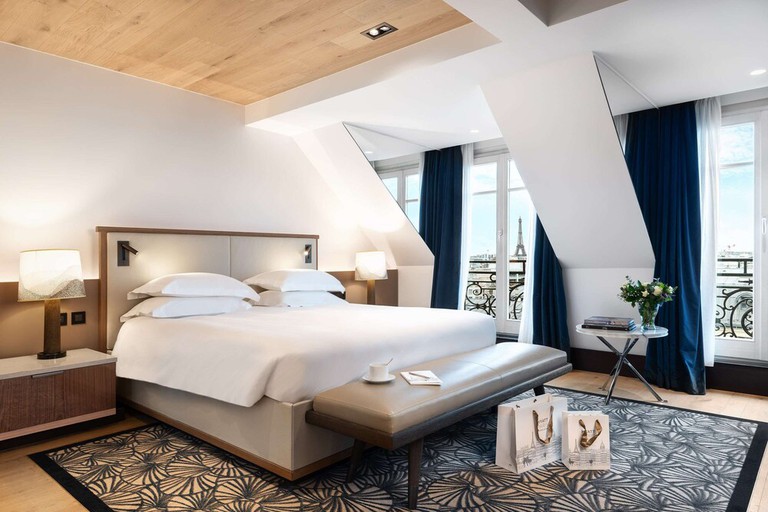 Compared to some of the larger properties the Hyatt operates elsewhere in the world, the 85-room Madeleine is modest, but it’s also one of the hotel chain’s most intriguing. The rooms have high ceilings, walk-in rainfall showers and the top-floor Parisian suites have highly Instagrammable sweeping views. Cafe M offers a seasonal, worldly menu; while La Chinoiserie bar – featuring a magnificent domed, glass roof – serves cocktails and tapas. Down in the basement, the spa offers treatments such as facials and reflexology. 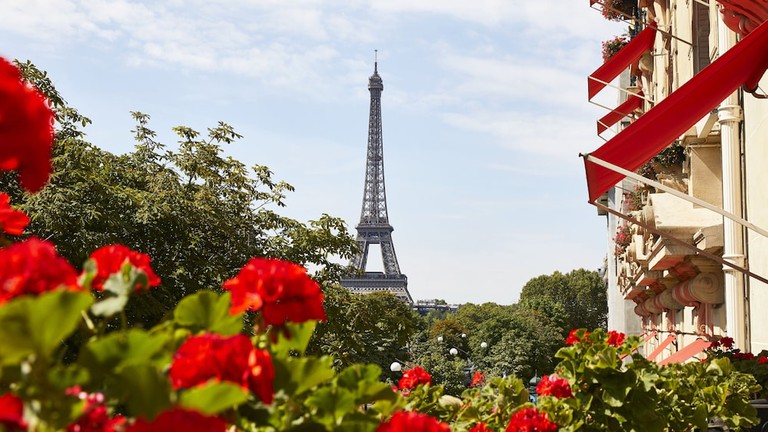 Many of the hotels around Paris are big on spectacle, but the Plaza Athénée is in a class all of its own. Fans of Sex and the City will recognise it from the final season; the Alain Ducasse restaurant in particular looks like some kind of sci-fi/period hybrid, with silver pod-like booths and massive chandeliers. The rooms are decked out with thick carpeting, and feature colossal beds, soaking tubs and a remarkable amount of floor space. There is a spa featuring Dior products; and four restaurants – the grandest of which is famed for its theatrical service. 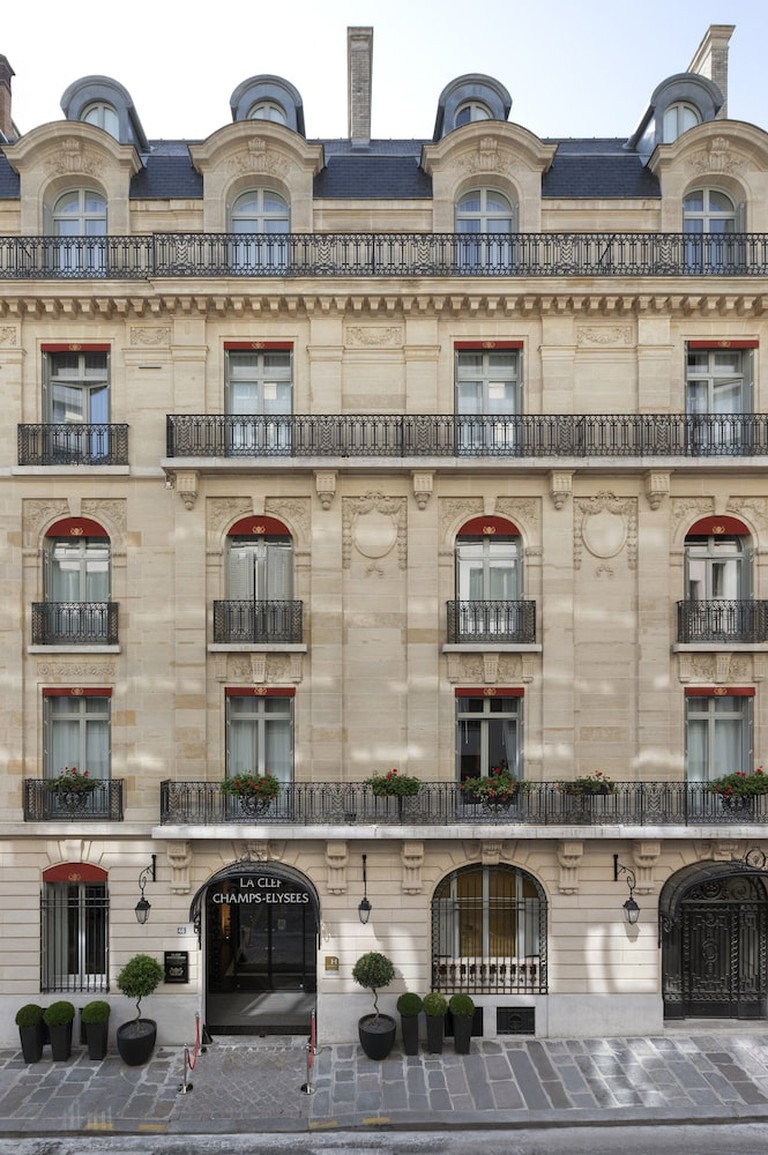 Cognac fans will be excited to learn that this hotel was in a past life the home of the famous Hennessey family, a strong pedigree which it honours gracefully. It sits about 10 minutes on foot from the Champs-Élysées, and feels like a part of the scenery inside and out, with sand-blasted walls and renaissance prints everywhere. The 70 rooms all contain little ornamental references to the history, as well as big mirrors (some of which hide TVs), lots of gold trim and rainfall showers. There’s a salon with a games room, an honesty bar and a big table next to it with different perfumes to sample. 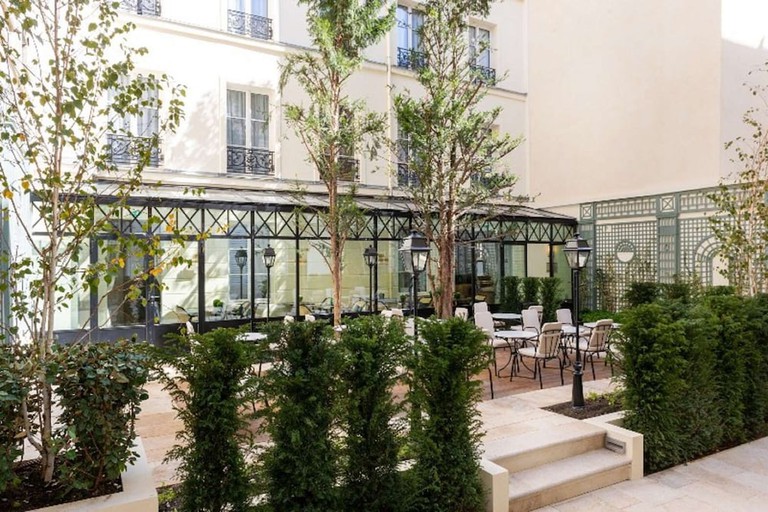 As you would expect from a hotel named after a famed classic writer, the Lord Bryon is heavy on romanticism. It’s conveniently close to the Triangle d’Or, and inside the rooms and common spaces alike are awash with chic furniture and elegant decoration. The veranda lounge area has an honesty bar, there’s a steam bath and, unusually for hotels in the area, it is dog friendly. 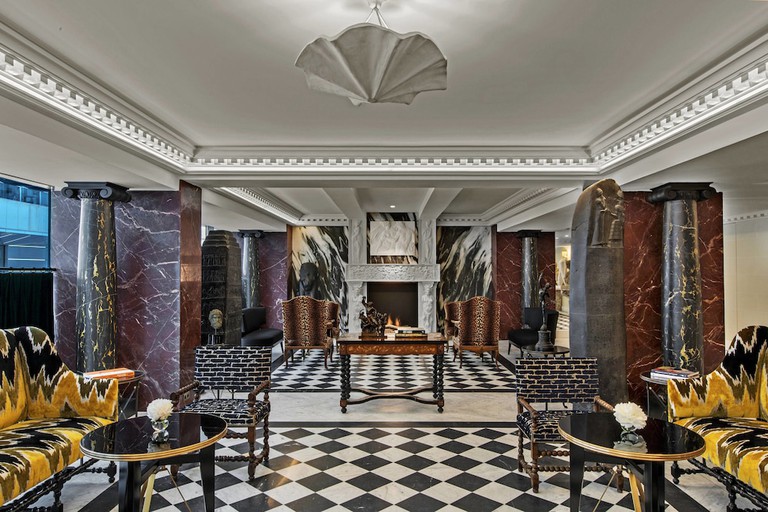 The interior of Hôtel de Berri is daringly innovative – think sassy leopard-print chairs juxtaposed with classy marble columns – which is perhaps unsurprising, considering that it was once owned by the avant-garde fashion designer Elsa Schiaparelli. The stylish decor is enhanced by a private art collection dating back to the 1900s, and there are decorative stone busts at every turn. But it’s the hotel’s spa that is the ultimate highlight, with its two Carita treatment rooms and a pair of hammams, one of which is exclusively for women. Outside, a private park lined with century-old trees provides a vestige of calm. For the more active, the fitness centre is open 24 hours a day and is equipped with state-of-the-art weightlifting and Technogym machines.

© Shangri-La Hotel, Paris / Hotels.com
Check Availability
Price Drop
Now from $958 per night
As might be expected from the former home of Napoleon Bonaparte’s grandnephew, Prince Roland Bonaparte, there’s sophistication in abundance at The Shangri-La Hotel. Listed on the French Monuments Historiques registry since 2009, this 19th-century architectural gem gained Parisian Palace status in 2014 (an accolade bestowed on only the very best Parisian hotels). The public areas are decorated with Murano-glass chandeliers, elaborate winding staircases and mosaic floors, and the 100 rooms and suites available are no less splendid – with incredible views across the River Seine. As for the cuisine, there’s a wide range of choice between the hotel’s three restaurants, including a one-Michelin-starred Cantonese restaurant, and La Bauhinia – serving a unique blend of French and Southeast Asian dishes.
More info 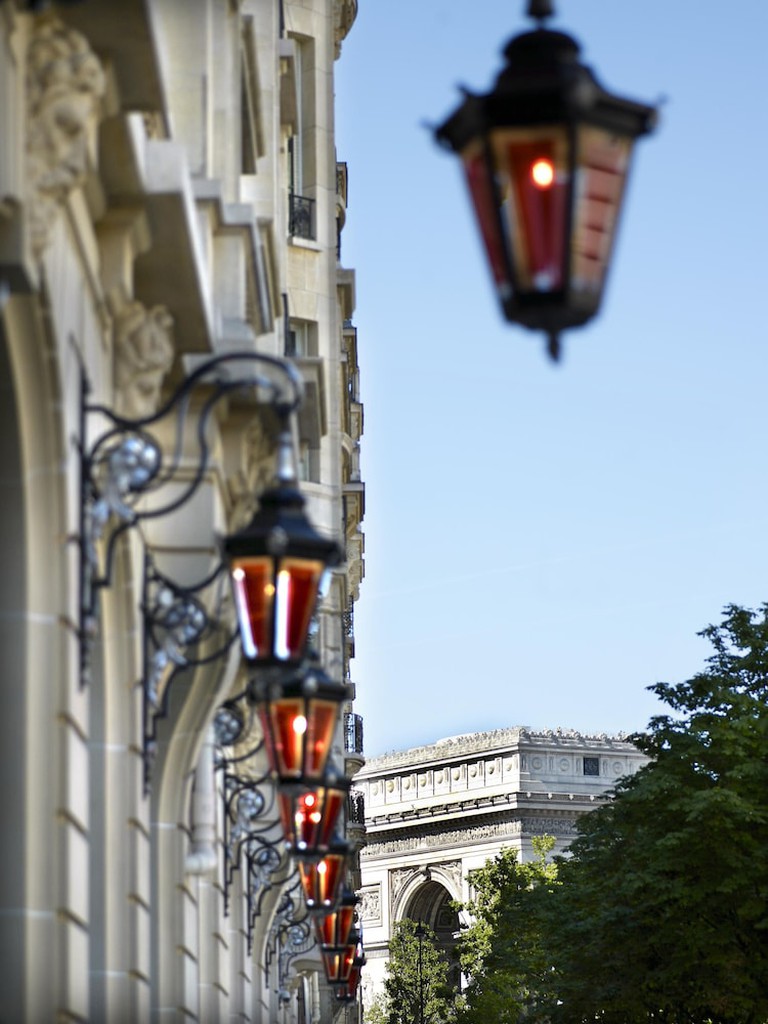 The Royal Monceau, Raffles, just a five-minute walk from the Arc de Triomphe, is a truly sophisticated Parisian hotel. Across its five lavish floors, each of which has been refurbished to perfection by world-renowned French designer Philippe Starck, are elements of glamorous 1950s-inspired decor. But despite the hotel’s grandeur, there’s also a warmth and homeliness that comes from the gentle pastel shades used throughout the design, and the huge windows that bathe the bedrooms and restaurants in natural daylight. 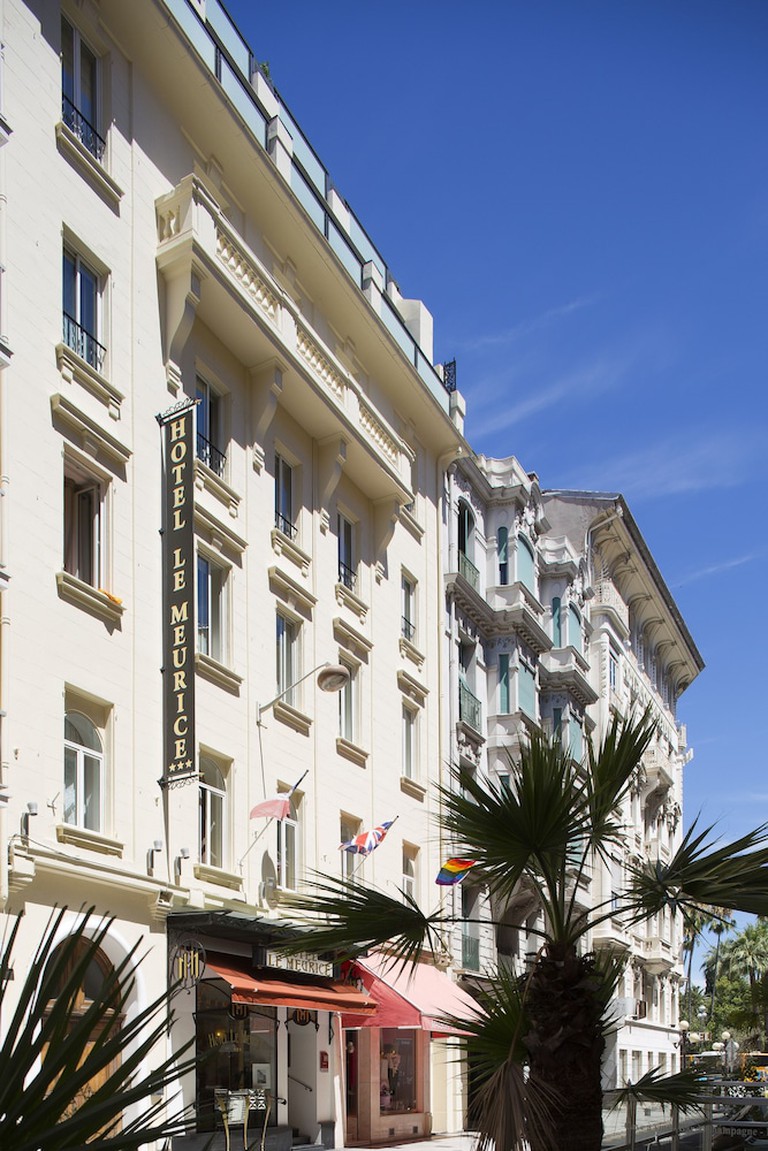 Part of the luxury Dorchester Group, the five-star Le Meurice is located between the Place de la Concorde and the Louvre – on the edge of the Jardin des Tuileries. The spectacular interior design, which draws inspiration from the Louis XVI era, is also the work of designer Philippe Starck. The hotel’s suites are truly decadent, with golden furnishings, draped curtains, plush seating and marble bathrooms. Tuck into magnificent cuisine in the hotel’s two-Michelin-starred restaurant, where guests are seated beneath chandeliers and surrounded by marble columns; or seek out the elegant Restaurant Le Dalí restaurant, which was named in the artist’s honour. And for relaxation, there is an on-site spa complete with world-class facilities. 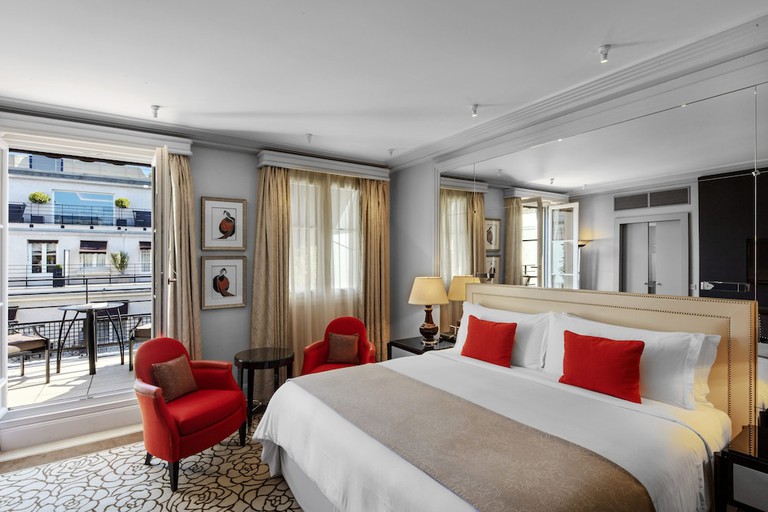 The Prince de Galles hotel, close to the Champs-Élysées, is another art deco Parisian hotel. Opened in 1929 at the height of the Roaring ’20s, this hotel was meticulously restored by Pierre-Yves Rochon, who incorporated sleek, streamlined designs and monochrome tones into the original design. There are 116 rooms and 43 classy suites on offer at The Prince de Galles, and the best suites command unrivalled views of the area’s top sites. The food is excellent too; the newly opened restaurant, Akira Back (led by the Michelin-starred chef of the same name) serves modern Asian dishes combined with international flavours. 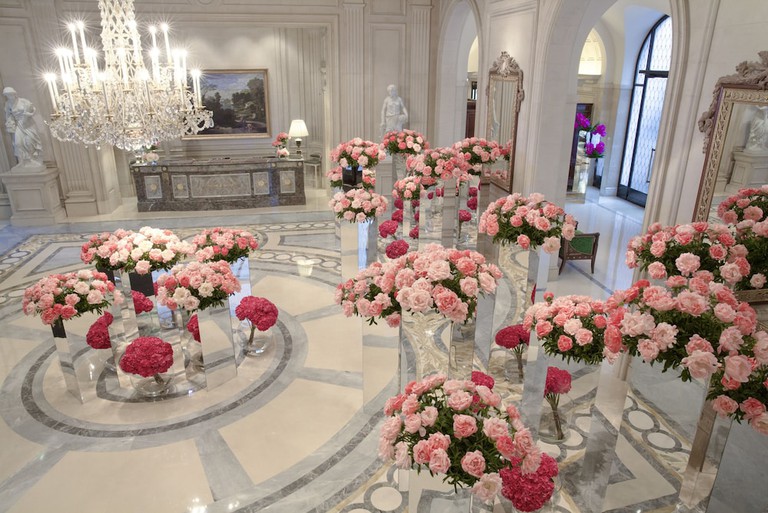 Four Seasons Hotel George V is located in the Golden Triangle of Paris, the city’s high-end shopping district. The palatial building was originally constructed in 1928 and is a spectacular example of art deco architecture and design. Many of the sumptuous suites, which feature marble fireplaces, richly decorated fabrics and cornice ceilings, offer views of the Arc de Triomphe, the Eiffel Tower and the Grand Palais. When it comes to dining, indulge in gastronomy from both the French Riviera and Northern Italy in the hotel’s three restaurants, which boast no fewer than five Michelin stars between them. 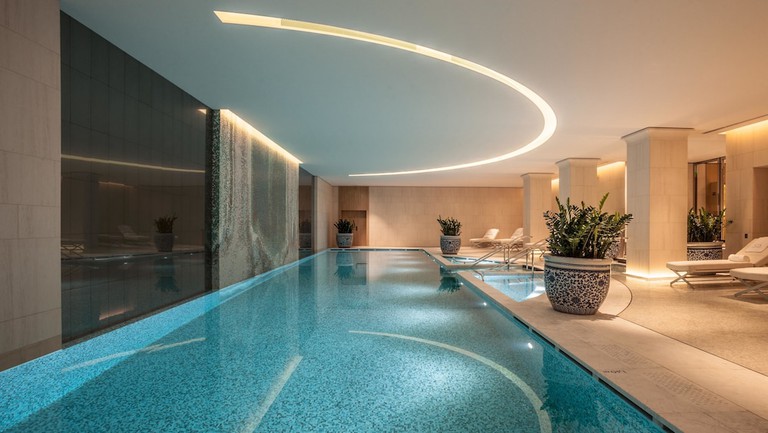 Courtesy of The Peninsula Paris / Hotels.com
Check Availability
Price Drop
Now from $1259 per night
The Peninsula Paris, located just 500m (1,640ft) from the Arc de Triomphe, and within walking distance of many other world-famous Paris monuments, is a truly spectacular hotel on the Champs-Élysées. Opened in 1908, the original establishment was legendary in the 1920s, when it was frequented by the rich and famous. Today, there are 200 stylish rooms on offer, including 86 sumptuous suites inspired by French haute couture, which is evident in the sleek furnishings and chic fabrics. The Rooftop Garden Suite is the most highly coveted room in the hotel, and offers incredible views of the Eiffel Tower. The Peninsula Spa is perfectly poised for a relaxing stay, with two VIP double treatment suites, and a pool with underwater mood LED lighting and separate Jacuzzi.
More info