The 10 Most Beautiful Metro Stations in Paris
Paris / Design

The 10 Most Beautiful Metro Stations in Paris

Paris is a famously beautiful city: it contains some of the best museums in the world, and many artists have lived here over the centuries. It’s not at all surprising that even the metro stations in the French capital are gorgeous, with designs that range from elegant art-décor entrances to renowned statues and intricate engravings. Culture Trip has outlined exactly what visitors should look out for in Paris’ ten most beautiful metro stations. 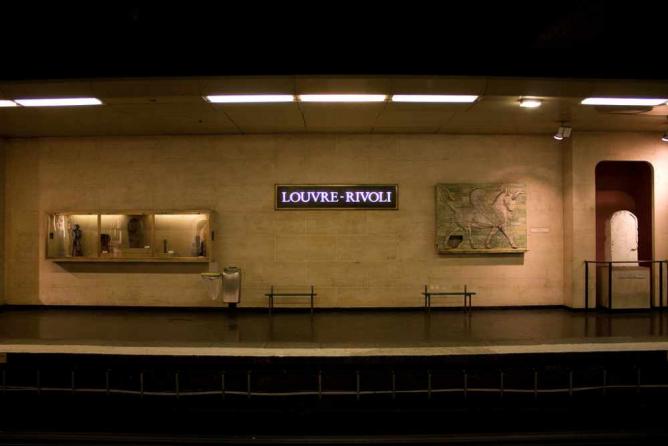 Line 1 passes through this station, which is decorated as a museum to pay homage to the nearby Louvre. It was opened in 1900 and was originally named just Louvre, but it was baptized again with its current name in 1989, after the construction of the Louvre Pyramid and the creation of a new entrance through the Palais Royal station to the Louvre. Even though it has lost its direct access to the Louvre, this station still conserves many replicas of its beautiful artwork.
More Info
Paris, Île-de-France, 75001, France
Visit website
Concorde
Train Station 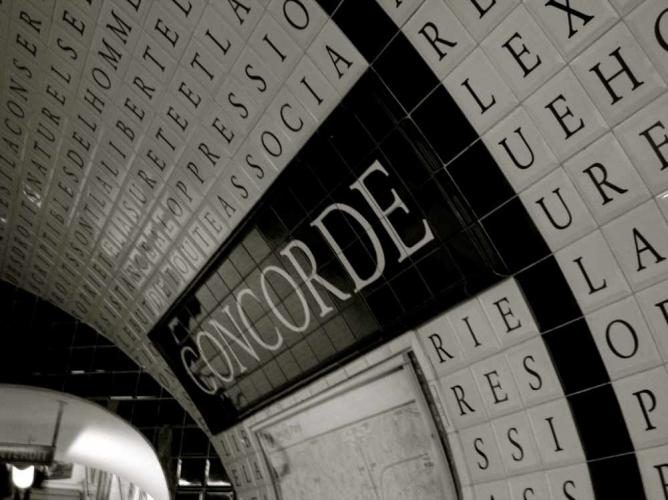 What is so striking about the design of this metro station is its tiled walls. Many Parisian metro stations have beautiful tiled walls, but these ones, envisaged by Françoise Schein’s, resemble a huge word search puzzle, and were put in place in 1989 (200 years after the French Revolution). There is no punctuation, so it is difficult to make out what is written on the wall, but the letters are not randomly placed: they spell out the Declaration of the Rights of Man, a very important text linked to the Revolution. It is served by line 12.
More Info
Paris, Île-de-France, 75001, France
Visit website
Varenne
Museum, Train Station 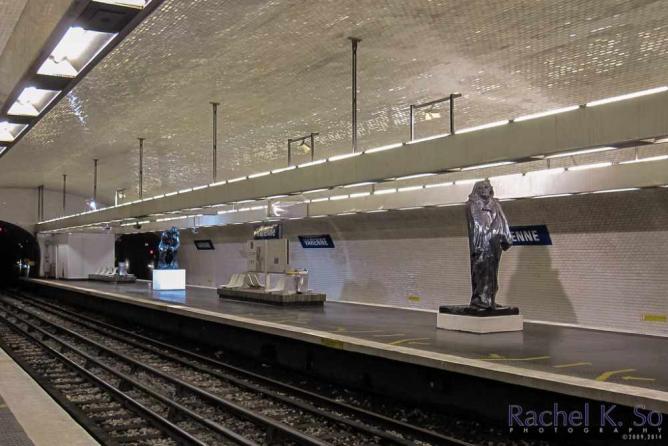 This station is on line 13 and is located in the 7th arrondissement. Much as the Louvre’s station has replicas of the artwork inside it, the Varenne metro station has replicas of the works in the nearby Rodin Museum. Rodin was considered by many to be the father of modern sculpture and one of his most famous sculptures, Le Penseur (the Thinker) is replicated here. This statue, which is famous around the world, was originally named The Poet, after Dante. The Varenne station has benches, so those visitors who are not interested in visiting the Rodin museum can ponder over the meaning of this sculpture for free while they wait for the metro to arrive.
More Info
Paris, Île-de-France, 75007, France
Visit website
Cluny-La Sorbonne
University 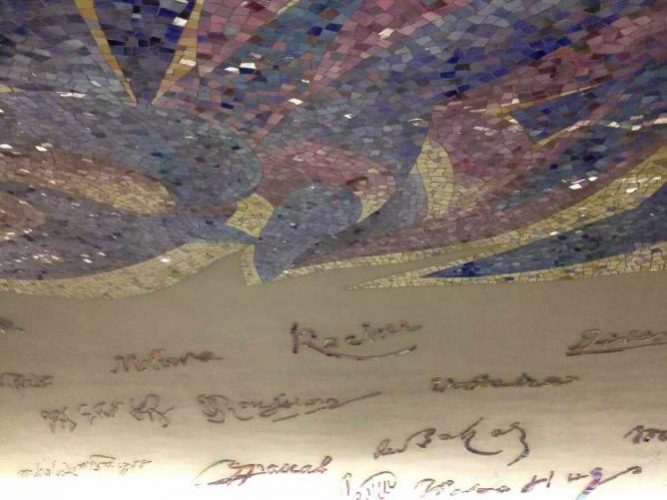 This station, located in the Latin Quarter (5th arrondissement), has beautiful, brightly coloured mosaics on the ceilings. The most important piece is called Les Oiseaux (The Birds) and is the work of Jean Bazaine. The names of important French people who lived in this area (Rabelais and Molière are just a few) are also written on the ceilings of this station. Cluny-La Sorbonne was first opened in 1930, and then again in 1988. It is named after the Musée de Cluny and the Sorbonne University, and serves line 10.
More Info
Paris, Île-de-France, 75005, France
Visit website
Pont Neuf
Bridge, Museum 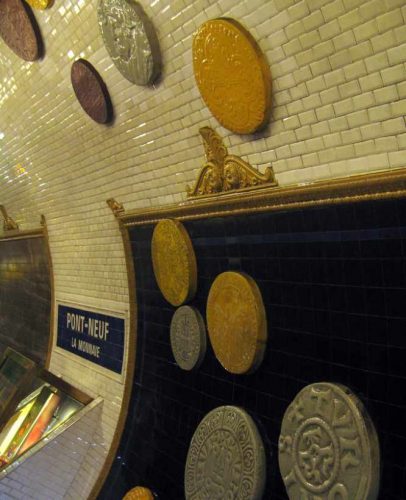 Pont Neuf La Monnaie also advertises a museum that is located in the vicinities, the Monnaie de Paris (Museum of Money or the Paris Mint), so huge coins can be seen all over this station. There are also two small exhibits with ancient coins (that are actually real) and an old set of scales in this station. It opened in 1926 and is part of line 7. The station is named after the Pont Neuf (New Bridge), which is ironically the oldest bridge in Paris.
More Info
Paris, Île-de-France, 75001, France
Palais Royal
Train Station 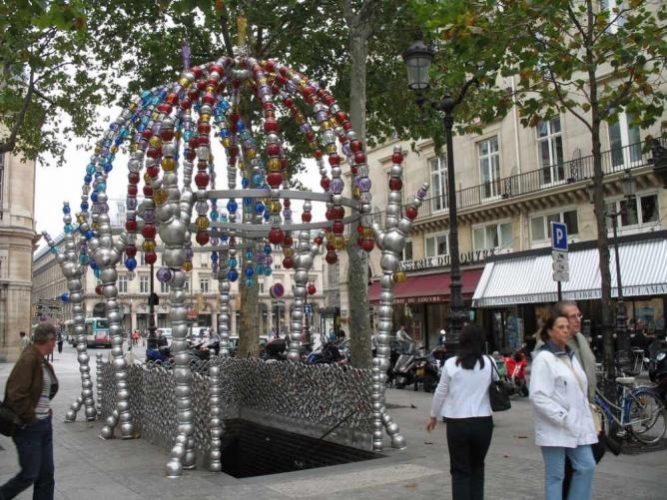 The Place Colette entrance to this station makes it one of the most beautiful in Paris, featuring a unique structure with huge, colorful glass beads that hang from it and create the illusion of being under a cupola. This striking entrance was created in 2000, to mark the 100 years that had passed since the inauguration of the Palais Royal metro station (lines 1 and 7 pass through here). The structure is the work of Jean-Michel Othoniel and is called the ‘Kiosk of the Night Walkers’.
More Info
Paris, Île-de-France, 75001, France
Bastille
Train Station 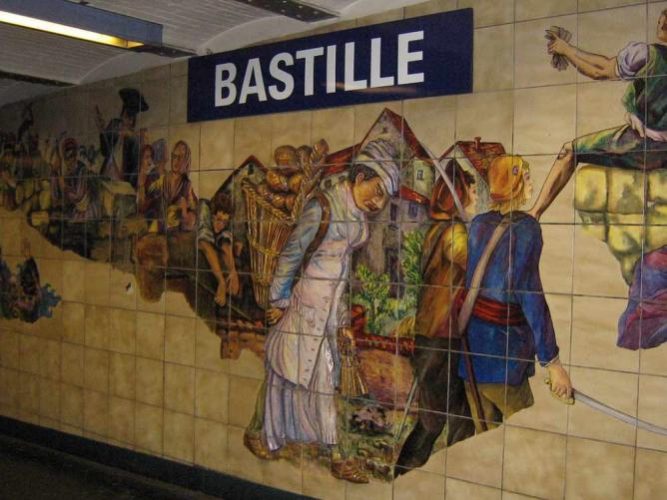 Bastille Day (July 14th) is a very important date in French history, and it is still celebrated to this day with huge parades and fireworks. This station has incorporated scenes into its tiled walls from the life-changing events that took place on that day during the French Revolution at the nearby Bastille. The artwork in this metro station, which is served by line 1, resembles huge paintings or frescoes. There are five works, produced by Liliane Belembert and Odile Jacquot.
More Info
Paris, Île-de-France, 75004, France
+33890177598
Visit website
Arts et Metiers
Building 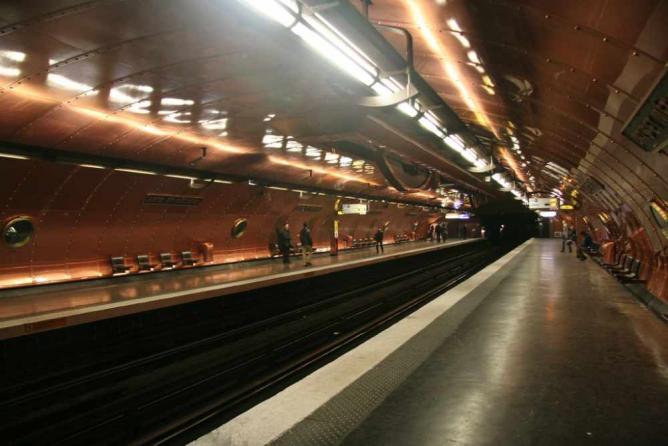 Arts et Metiers first opened in 1904, but was redesigned in 1994 to mark the 200th anniversary of the creation of the National Conservatory of Arts and Crafts. The redecoration gave this metro station the illusion of a submarine (it even has portholes!). The station now resembles something out of a Jules Verne novel, which was indeed one of the sources of inspiration for Francois Schuiten, a Belgian comic book artist who designed this metro station. Lines 3 and 11 pass through.
More Info
Paris, Île-de-France, 75003, France
Visit website
Liège
Train Station 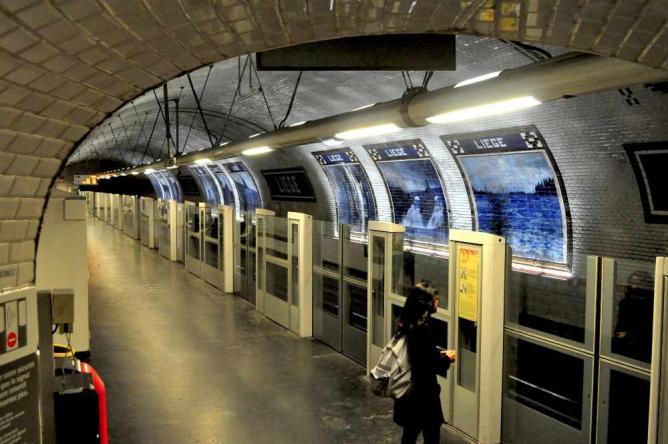 This metro station was originally named Berlin when it was inaugurated in 1911, after the nearby Rue Berlin, but its name was changed to Liège during World War I. Liège is a city in Belgium, and it was chosen as the station and the road’s new name to pay homage to all the men who fought there to resist German advances during the war. In 1982 two artists from Liège redecorated the station and produced the stunning ceramic tiling that depicts beautiful landscapes and the most important landmarks of their province. It is part of line 13.
More Info
Paris, Île-de-France, 75008, France
Visit website
Hôtel de Ville
Building 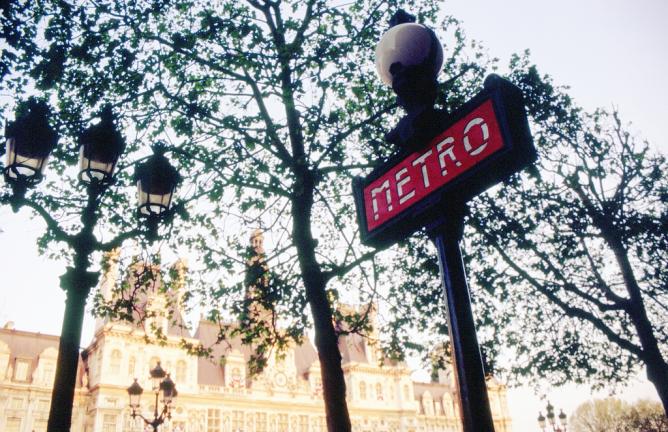 The blazon of Paris can be seen in this metro station, located in the 4th arrondissement. It was recently renovated and also boasts a great quantity of pictures, maps and engravings of Paris at different stages of its history. The station, Hôtel de Ville, is named after the City Hall, which is located above it. This station was opened in 1900 as one of the eight original stations of the line that went from Porte de Vincennes to Porte Maillot. It serves lines 1 and 11.
More Info
Paris, Île-de-France, 75004, France